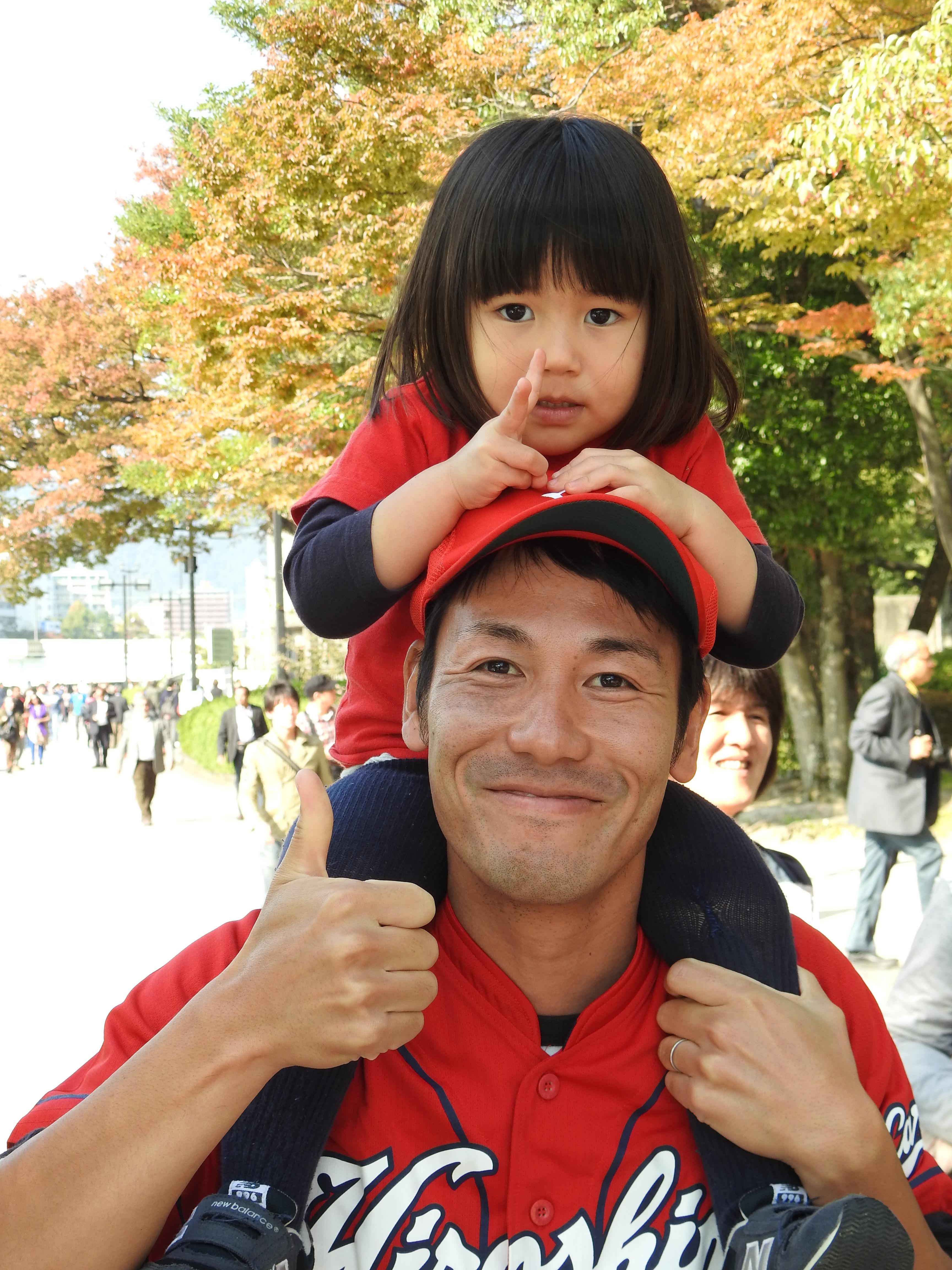 Go Carps! Hoohoo! 2016 Central Division Champs, baby! No doubt about it. Of course, what would you expect from a team with Tanaka, Kikuchi, Arai AND Kuroda. I know! DYNASTY! 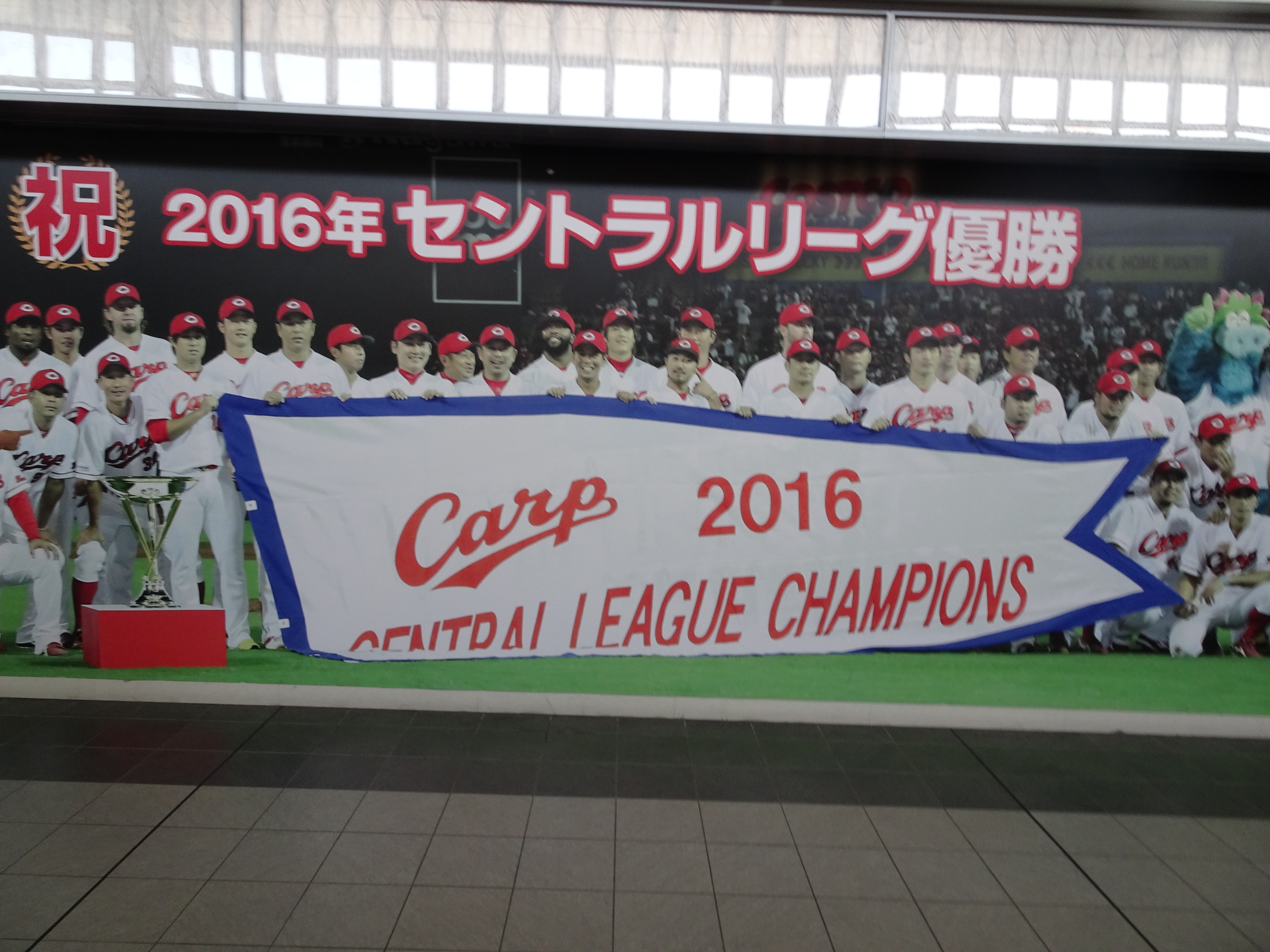 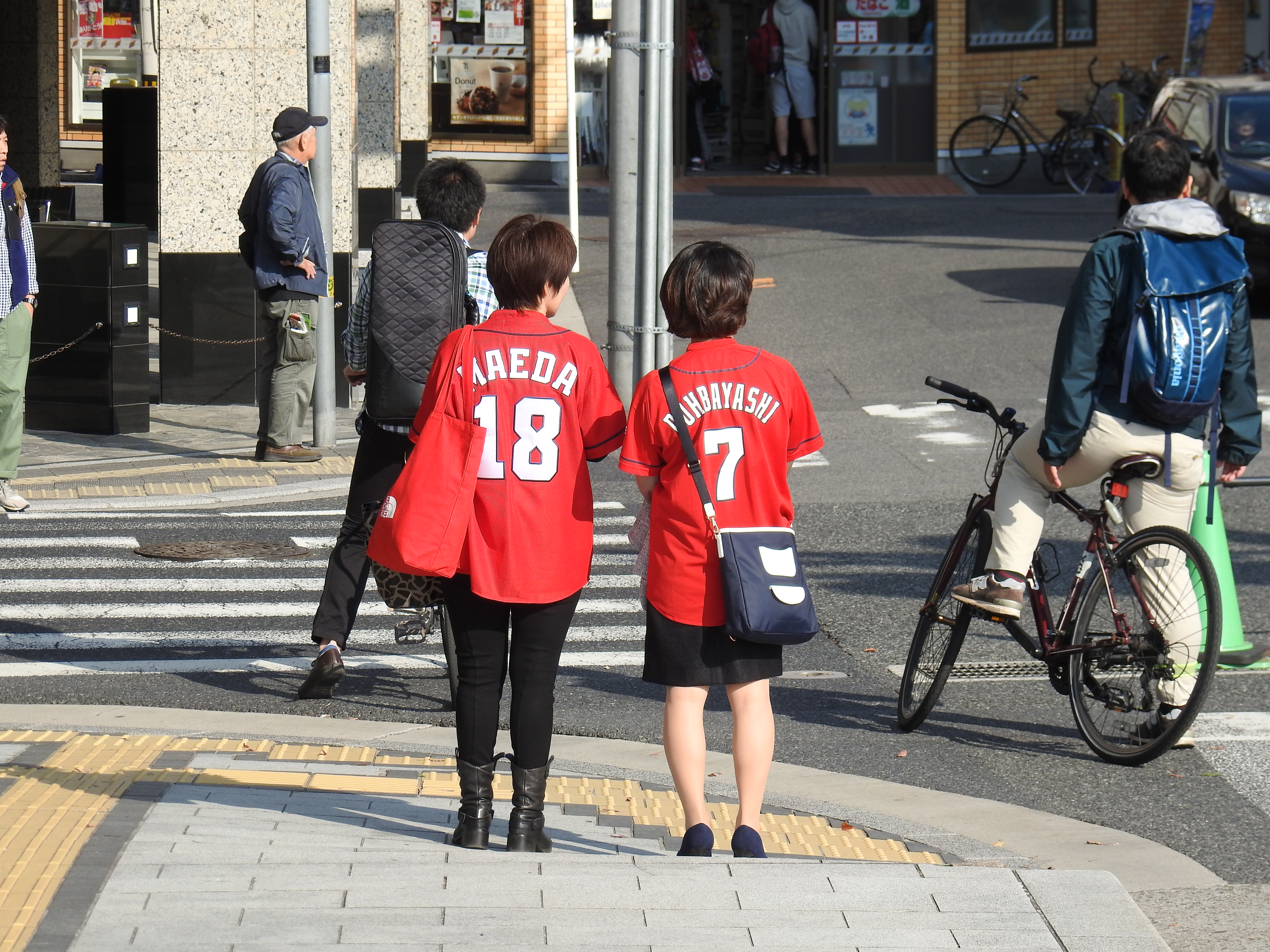 Yes, the Hiroshima Carps are the champs. While you might think that this is just a bit of international travel trivia, let me assure you that it was incredibly relevant to our visit to Hiroshima.

We arrived on the day that Hiroshima chose to celebrate the Carp championship. Why is this relevant? It affected us in several palpable ways.

First, it substantially complicated our travel arrangements. When we were making reservations 3 days ago, we could not understand why the closest available accommodations were 10 miles (38 streetcar stops) away from the center of town.   As we pulled into the city in our train, we saw the Mazda Zoom Zoom Stadium full of fans and a river of red heading to the stadium that was over a mile long. This river was the Carp faithful decked out in their favorite players uniform or wearing a commemorative championship t-shirt. 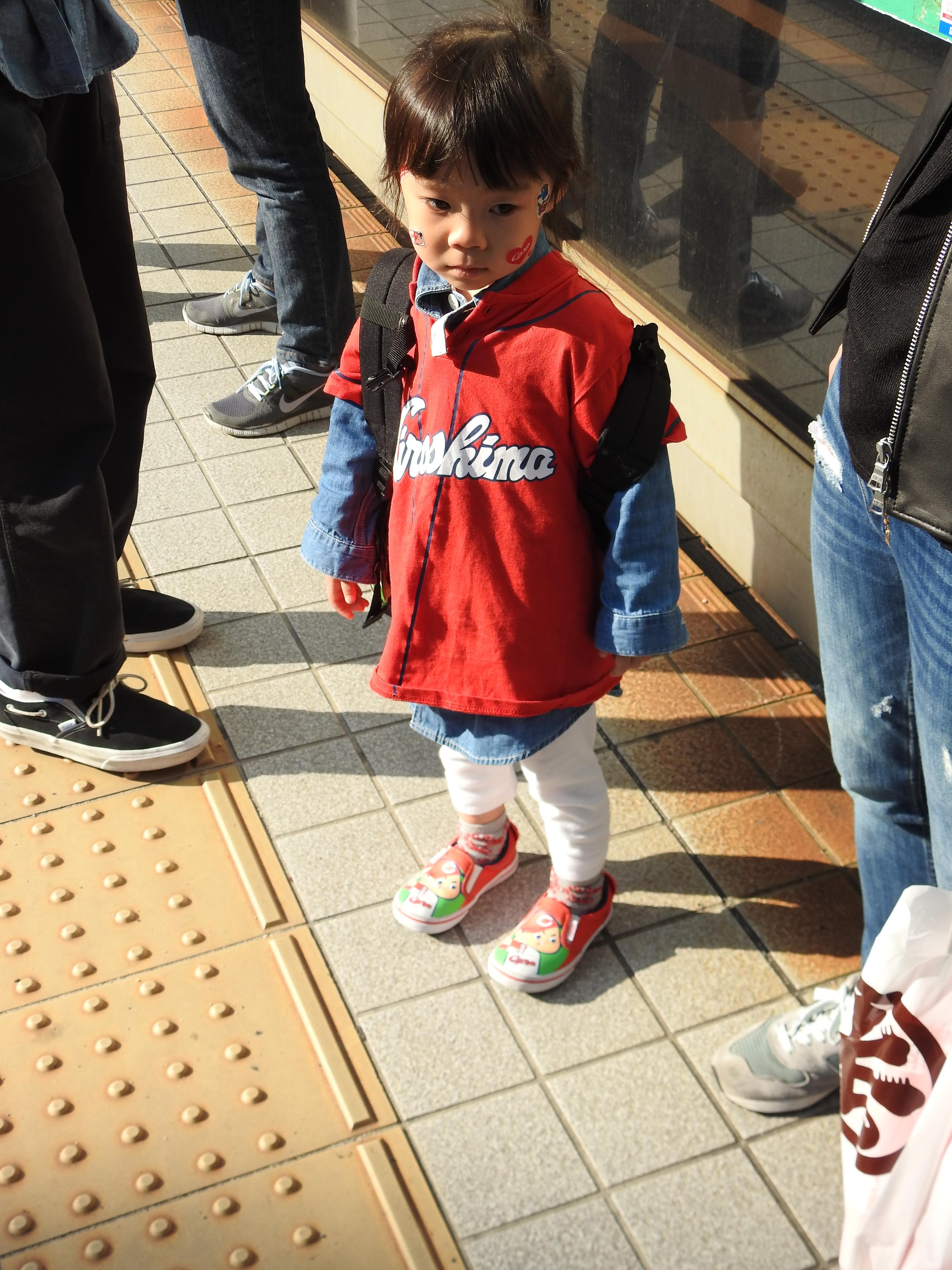 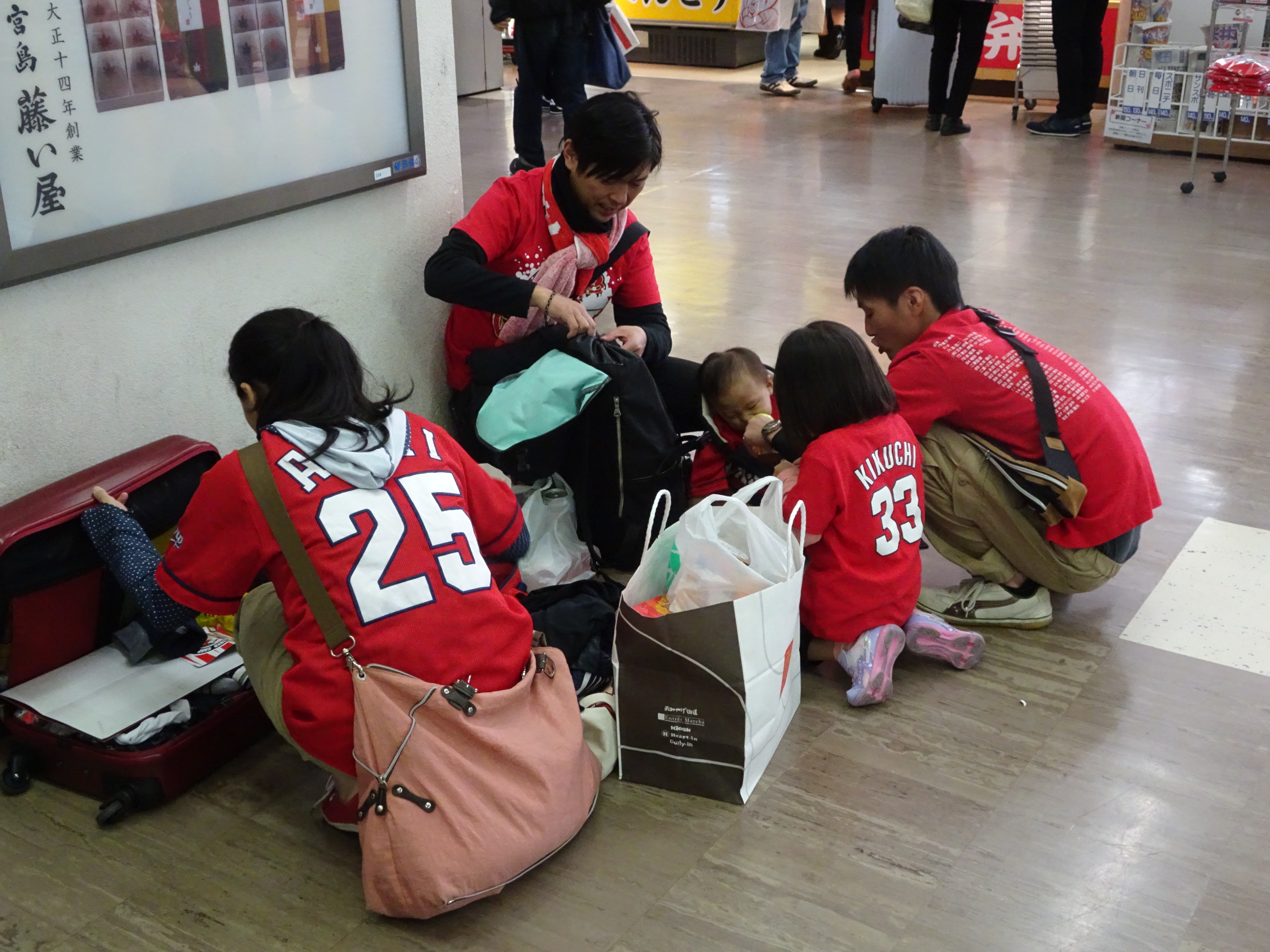 But it was not just the accommodations that celebration affected. Knowing that we were 45-60 minutes from our hostel, we planned to leave our bags at the train station and visit downtown Hiroshima before heading to our place. We soon learned that the station did not have a baggage check area, but it did have coin-operated lockers.

Lockers that must have contained a massive amount of Carp fan luggage.

We could not find a single locker big enough for even one of our backpacks. Susie found a train employee who spoke enough English to direct us to a more remote set of lockers. When we arrived there, the large ones were once again full, but we could find 6 medium sized ones.

It was then that Susie’s inspiration saved the day. Rather than check our big backpacks and walk with our smaller day packs, we would check the smaller packs and remove all the heavy items from the big packs and walk around town with them on. 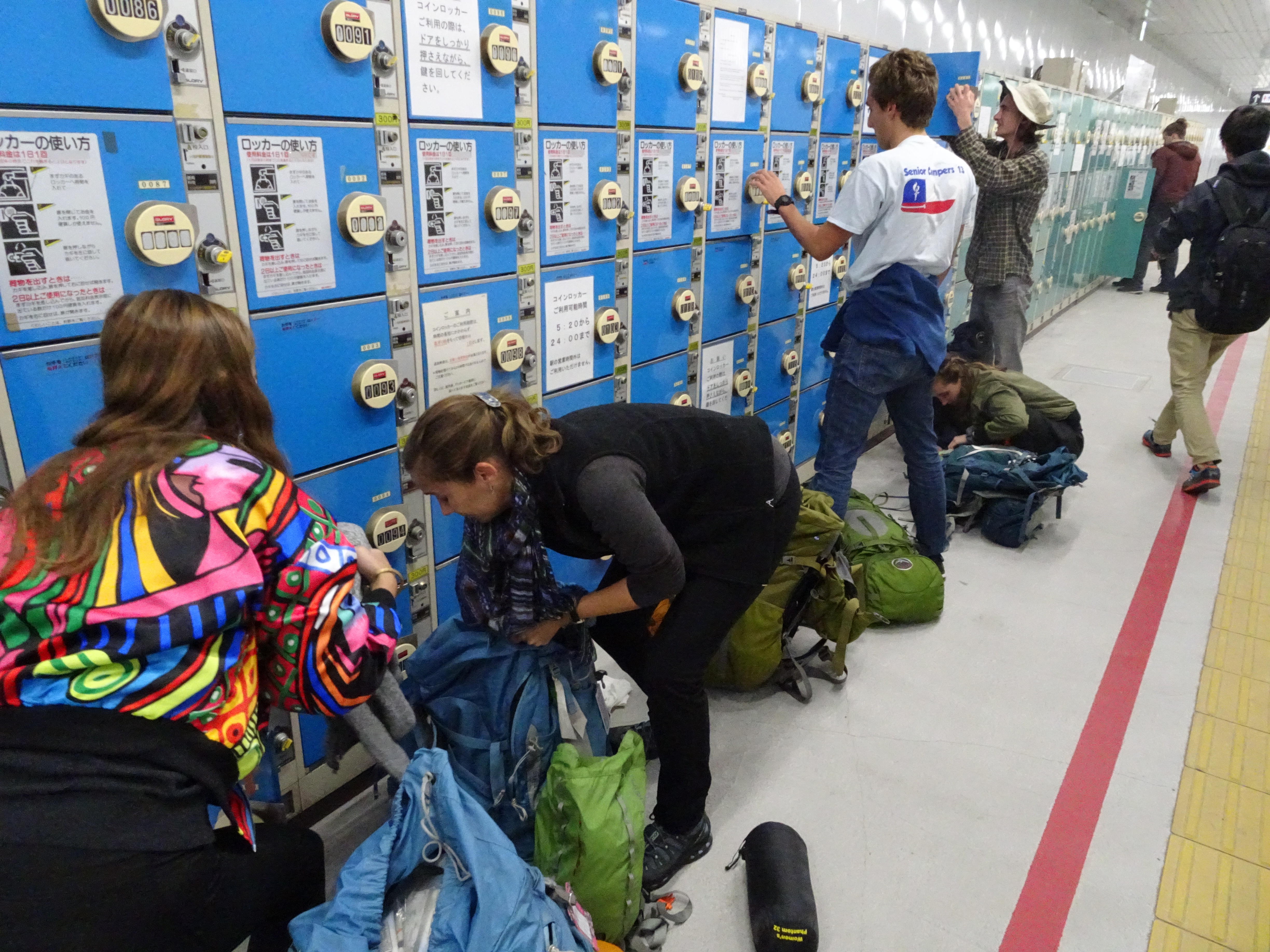 I am not sure if any of my previous pictures made this clear, but each of us travels with a large backpack and a smaller one that we wear in front. Picture a pregnant Sherpa and that is us. 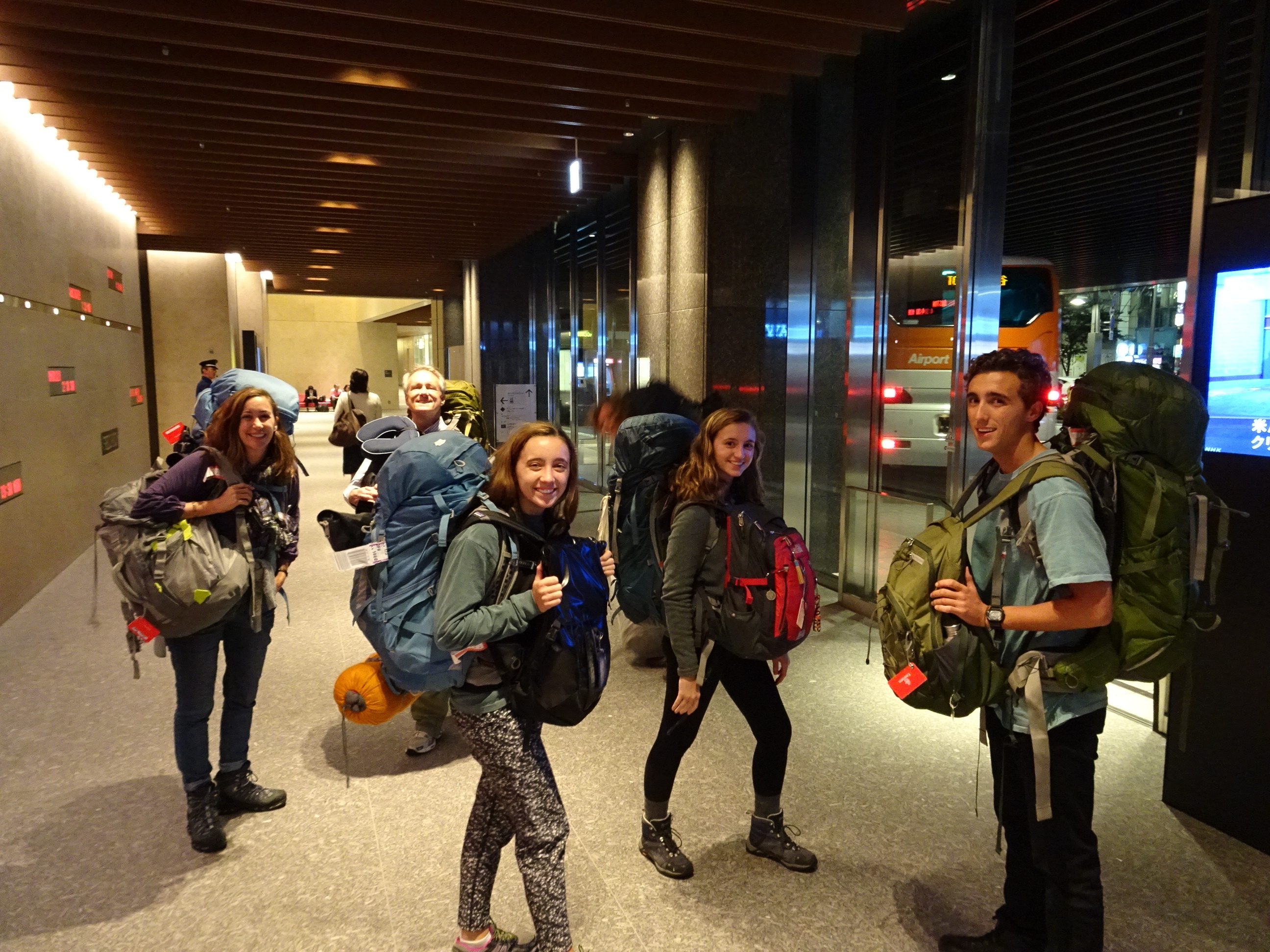 Each of us packed our locker like a can of sardines and marveled at how light our normally dense packs could become.

From there, we went to the Peace Park and Atomic Bomb Dome. 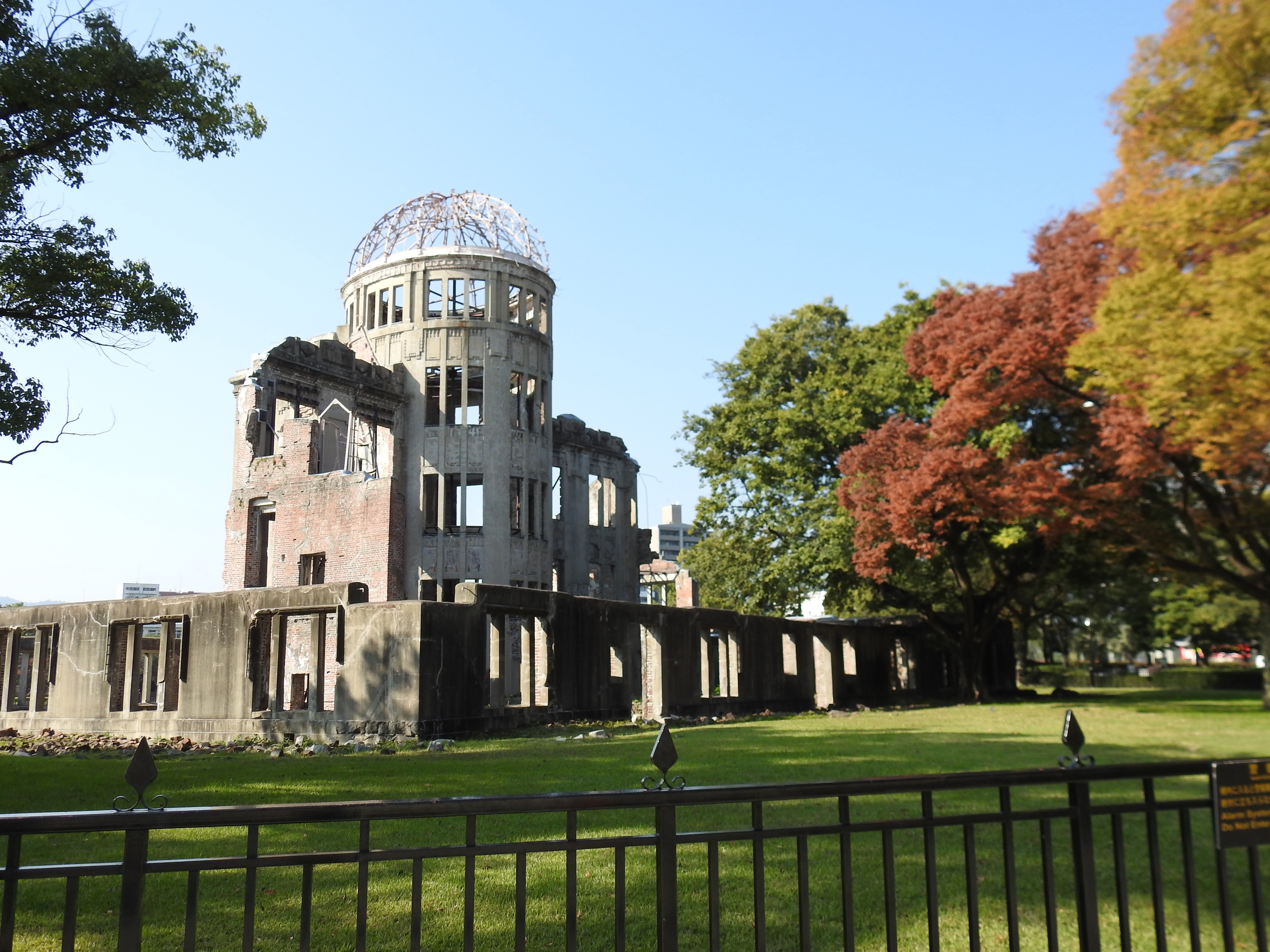 I did not know what to expect when we visited Hiroshima. Would it feel like a tourist destination or a guilt trip? Would it be worth going that far south? Hiroshima is almost 6 hours from Tokyo by bullet train, or over 500 miles. Would we come this far and wonder why?

I am so glad we came; not for the sites, but for the conversations that it generated. 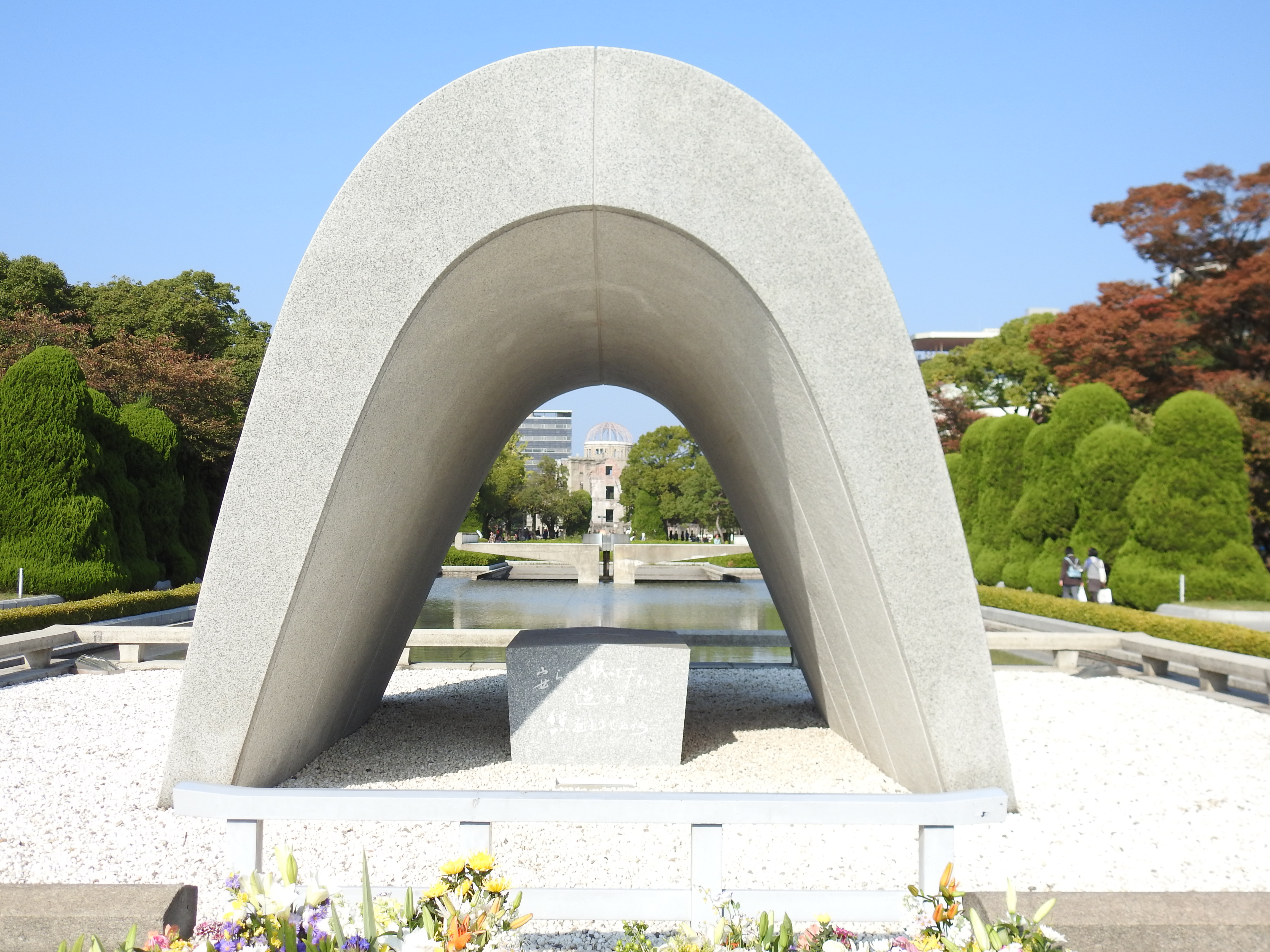 We learn best when we are active learners, when we are legitimately curious and asking question rather than sitting idly while someone else lectures to us. Unfortunately, so much of our education system continues to use passive learning environments. One of the reasons that I love summer camp so much is the fact that campers are learning critical skills like conflict resolution, oral communication, leadership, resilience and collaboration in an active and engaging environment.

As a child, I loved field days. I would remember every detail from our visits to planetariums or museums. 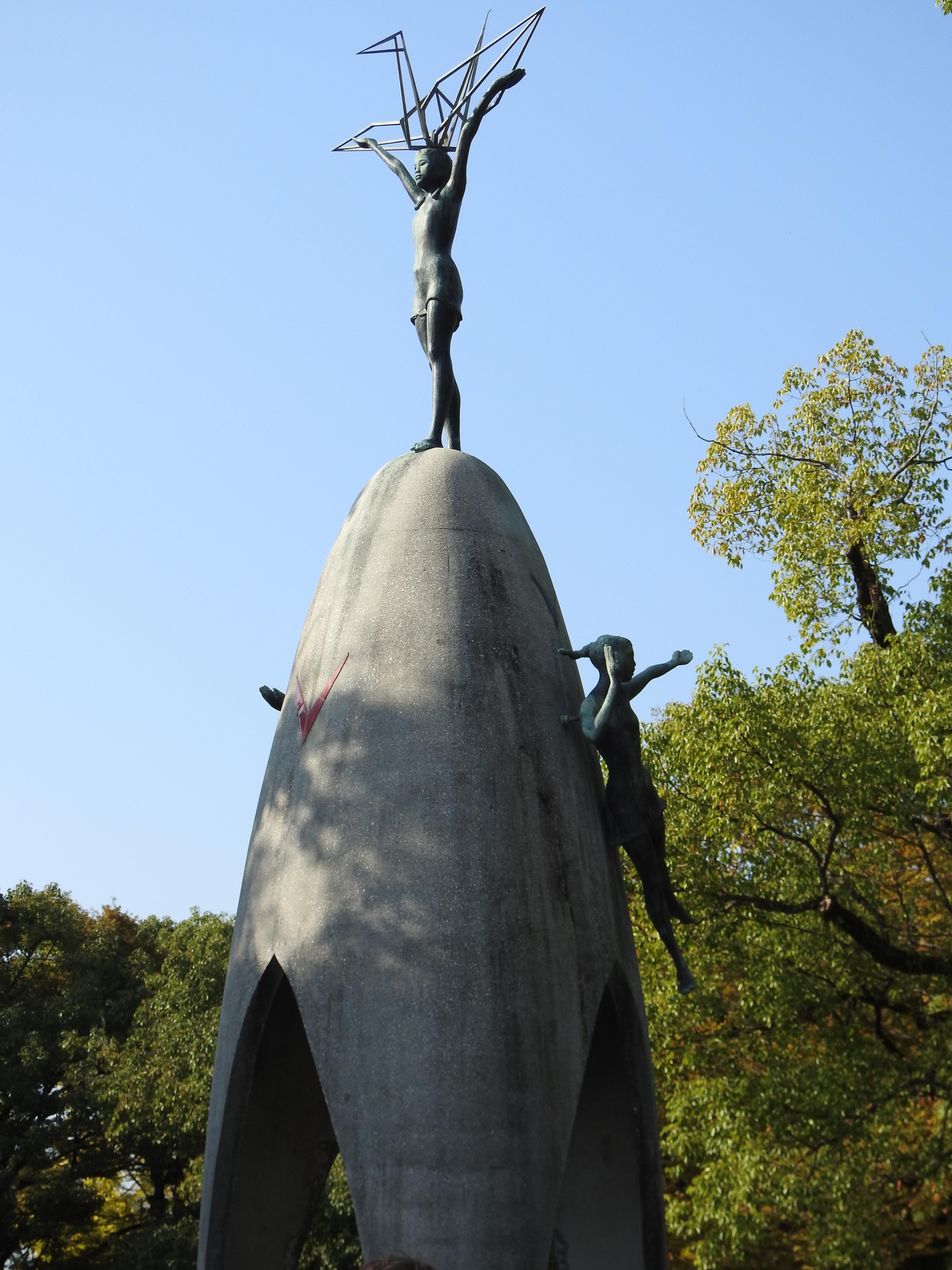 When we visited Vietnam 5 years ago, the kids barraged us with questions for hours about the war there. We talked about economics, geo-politics, the ethics of war, the methods of war and many other topics. What made this so special is that the kids initiated every question and fully absorbed the information. It was real and interesting to them.

Similarly, being at the site of the first atomic bomb used in war brought out a flood of great questions:

They had other questions, but you get the idea. History became alive for us.

I will not delve into the morality of the bomb or the disparate views on it. I know lovely people who have very different views and it is not the purpose of this blog to lecture.

I, however, will share an insight that I learned a few months ago when the President visited Hiroshima. If you will recall, there were some asking whether he would issue an apology. A researcher from Cornell University gave the following (fascinating) answer.

“Of course he will not apologize. And they do not expect it. In fact, our two countries tend to avoid talking about the bomb because we have such disparate narratives about the event.

For the US, the atomic bomb was a necessary evil. The US had already bombed Tokyo heavily, but the Japanese leadership seemed unwilling to surrender. Dropping the bomb would show that we had the weapon and the resolve to use it. They chose a place to illustrate maximum devastation, believing that nothing less would move their leadership. In this way, the bomb saved lives, both military and civilian (from future normal bombings). In this narrative, the dropping of the atomic bomb is the end of story.

For the Japanese, the dropping of the bomb is the beginning of the narrative. In this story, Japan is the first (and still only) victim of nuclear weaponry and must take a leadership role in nuclear disarmament. Also, from that point forward, Japan has seen itself as a leader voice for world peace.   This narrative also has the advantage of eliding over several less pleasant historical facts, including the sneak attack on the US, the treatment of the Chinese and their ultimate defeat/surrender.

Both sides have a narrative that works for them. Why should they change?”

While I am sure her opinion is not the definitive one, I find it wonderfully persuasive. It also makes me wonder if the Japanese interest in peace explains the Japanese tendency to give the “Peace” sign in photographs.

In the end, it was a great day for companionship and learning. 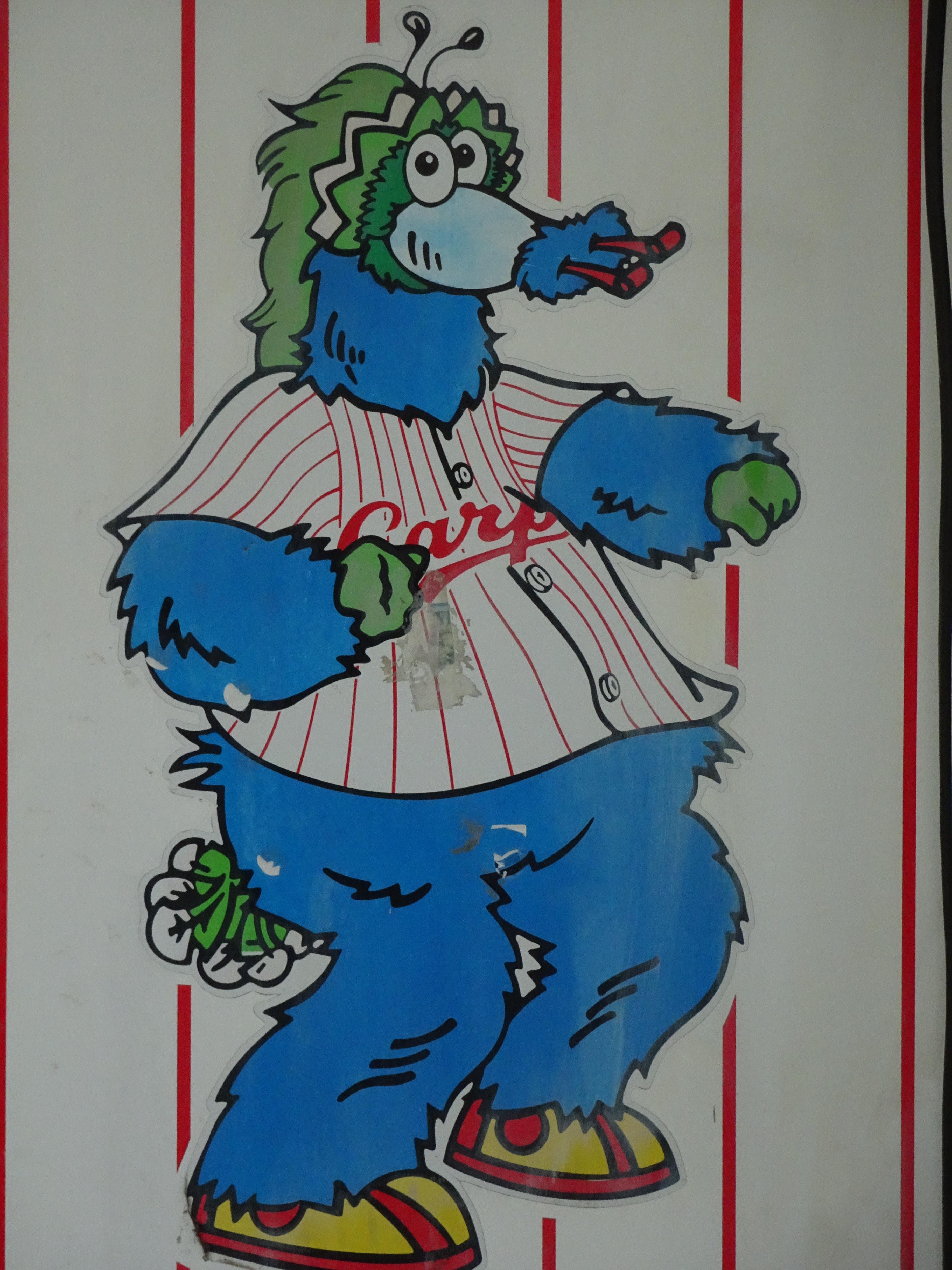 This is the mascot. 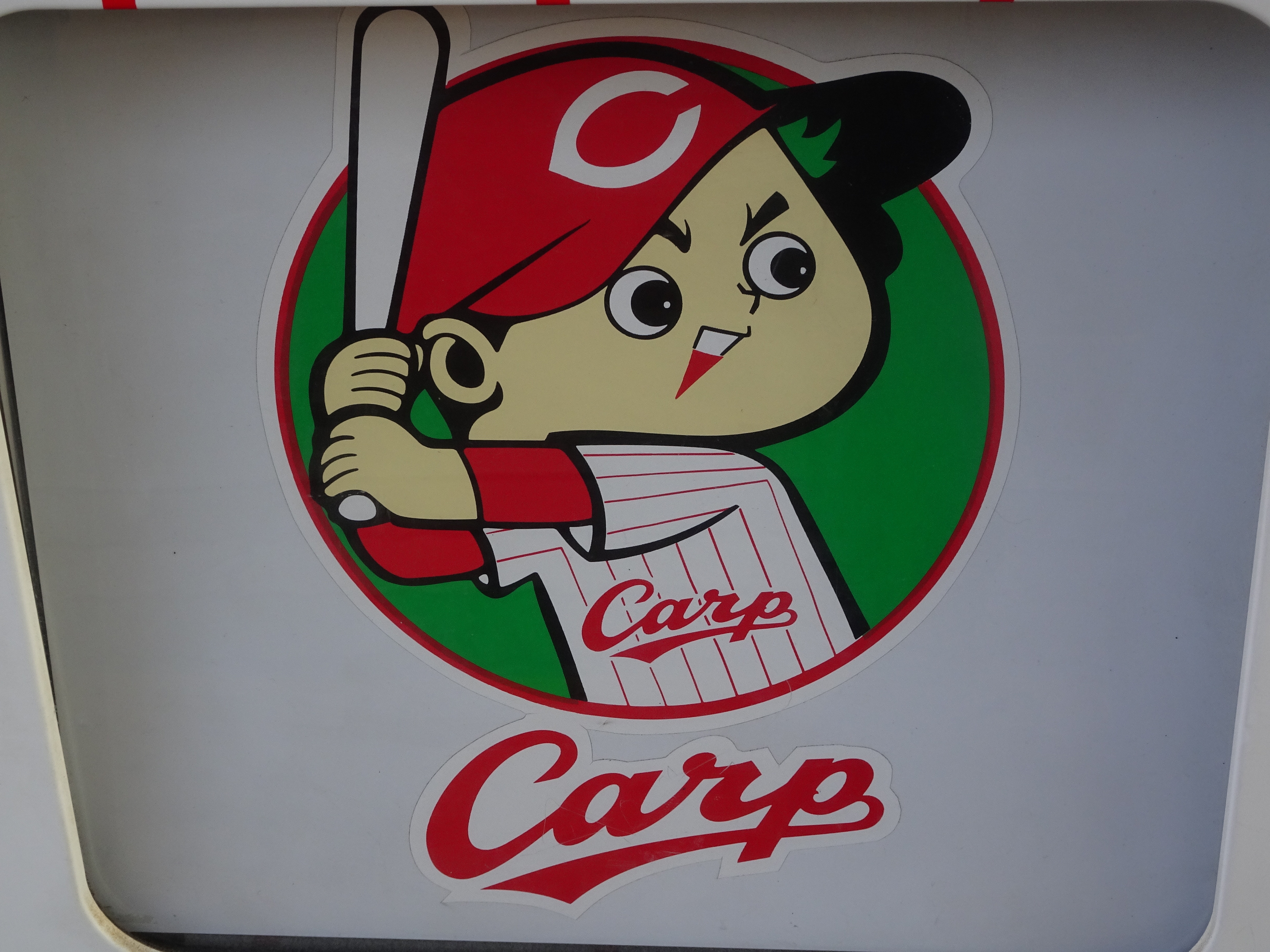 This is the logo.

By the way, the fine folks of Hiroshima are so crazy about the Carps that they have created Carp Sake. 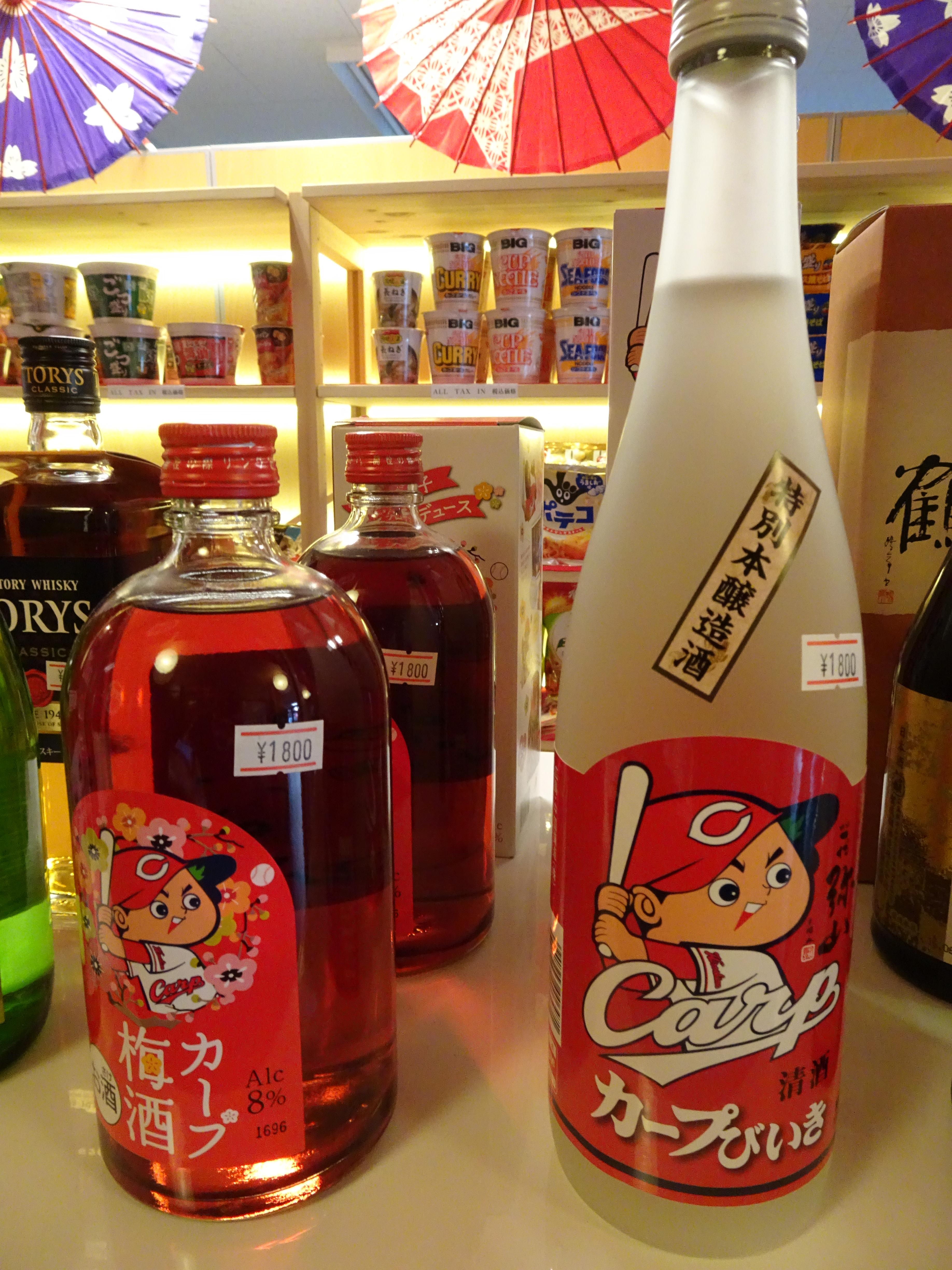