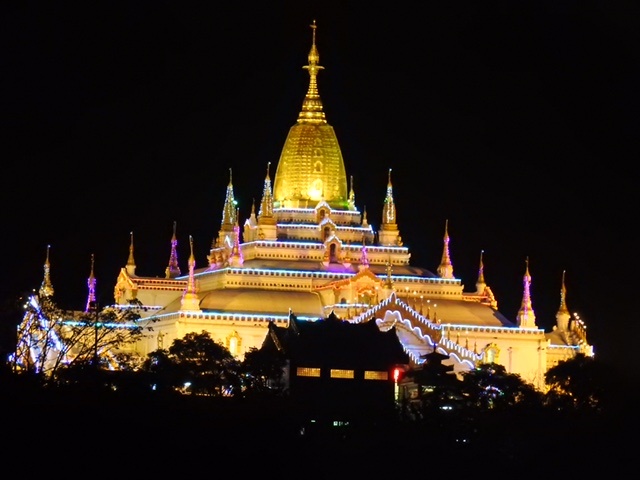 When we decided to go to Myanmar, Susie began to research how to travel here. We love being on our own, but also see the advantage of guided tours. During her research, she came across a Canadian named Dustin Main who has visited Myanmar over a dozen times in 5 years and has started a small travel business. He seemed to have an instinct for quirkiness and edginess while also understanding what is too much for the average Western tourist (e.g., sleeper busses).

Unfortunately, our timing did not work with any of his tours, but he did offer to provide consulting services to help us plan our trip. He would help us find guides and drivers, but also tell us where we could self-navigate. We scheduled a Skype interview that started like this.

“I have looked at your dates and want to suggest an itinerary that focuses on two festivals. The first is a religious festival in Bagan. You will see monks and lots of vendors. But the one I really want you to see is the Fire Balloon Festival.”

He then pauses for dramatic effect.

“But it is sorta dangerous.’

“But no one died last year.”

This was our introduction to the Tazaungdaing Festival. Basically, the people celebrate the full moon in November be making homemade balloons, placing fireworks into their baskets, sending the balloons into the sky with timers (essentially bamboo soaked in diesel) and then watching the cascading pyrotechnics.

I can hear you asking, “But how can they be sure the balloon is high enough before balls of fire start shooting out?” and “How do they make sure that the fireworks do not shoot straight down into the crowd?”

These would be great questions. They, however, are questions our fire-balloon pryro-technicians seem uninterested in. Sometimes they do not get high enough. Sometimes they shoot fireworks straight down.

Do not worry that we have gone completely crazy. We asked Dustin about the ways to eliminate the danger. He assured us we could mitigate virtually all of the risk by avoiding the center of the festival (with the crowds and the balloons directly overhead), staying away from flammable buildings and hiring a smart guide.

With this information, we decided to embrace this bizarre tradition.

Oh, but it gets a little better.   We are going to the festival on the most important day – the full moon (a supermoon) itself. The festival has been going on each day for a month or so, but this is the biggie. 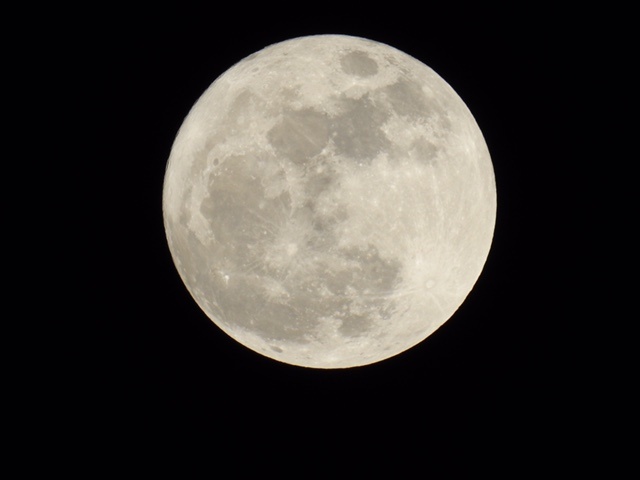 We have been hearing stories of the massive crowds. In addition to fire danger, keeping our family together would be a massively challenging task.

But the answer came to us in the form of kind soul and a brutal bacteria.

All four of the kids woke with massive intestinal challenges. Some are bad. Some are worse. During a “Waynes World” skit on Saturday Night Live, Mike Myers (Wayne) talked about a “peristaltic chain-reaction” where one person gets sick and everyone else follows suit.

Terrill walked into our room and said “Virginia was sick all night” (they share a room). By the time Susie got there, Terrill was sick too. It then became clear that it was not just nausea. Susie gathered clothes to clean.

She came back and we started to soak the clothes. On a whim, she decided to check in on the boys. Since this was a sleep-in day, we did not want to disturb them, but she had a feeling that the issues were not limited to the girls.

She returned to the room.

“We are 4 for 4! The boys are bad too. They are gathering their clothes now.” They tagged team all night long.

We spent the rest of the morning and early afternoon giving medications, assuring hydration and loading them up with electrolytes. Susie travels with an array of medicines, including antibiotics designed to counter food poisoning. [Note: Susie would like me to characterize this as “simultaneous severe food poisoning.”]

We met with Chit Htwe, our guide, and discussed alternatives. Initially, I thought it might just be he and me. Then Liam started to rally, “I can’t miss this!”

Children who had been truly ashen at 11AM were getting their color back by 1:30. We needed to make our decision by 2PM.

That is when the kind soul comes in. Chit offered to let us stay at his house which happens to be in the town with the festival. The kids would be near a bathroom, we would avoid crowds and we could miss the traffic jams.

With that offer, everyone decided to go.

What was estimated to be a 2-hour drive took less than one hour. Our driver (not Chit) is wasted in Myanmar. Formula One would be a better calling.

When we arrived at his house, we had about 2 hours before the sunset. He then made a sweet offer, “Anyone tired or sick can sleep upstairs. But if you want to see something interesting, please come with me.”

Liam and I joined him to watch a massive procession while Susie stayed behind to mind the dicier children. While they set off the fire balloons for a full month, they only have this procession on the last day, during the Full Moon. The main street was lined 5-7 people deep on both sides of the main street. Groups created floats that they would carry. Some were in the shape of elephants or pagodas. Some had over 300 candles lighting them. 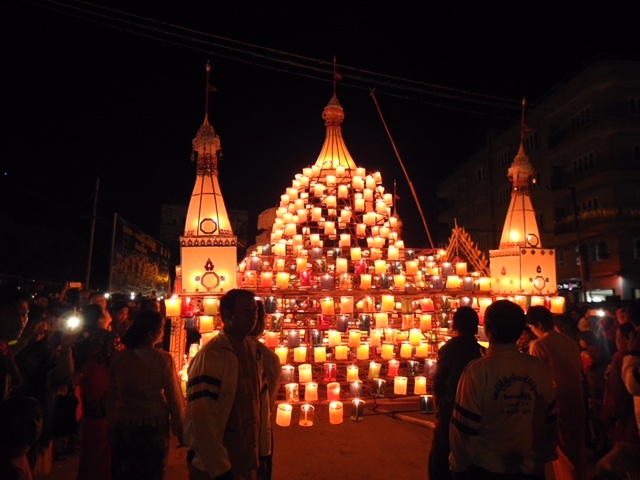 People paraded between these floats with lanterns and beautiful costumes. 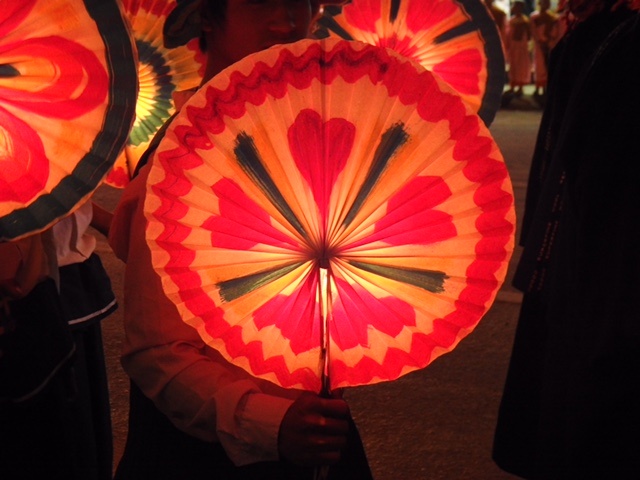 Other people played instruments and danced. 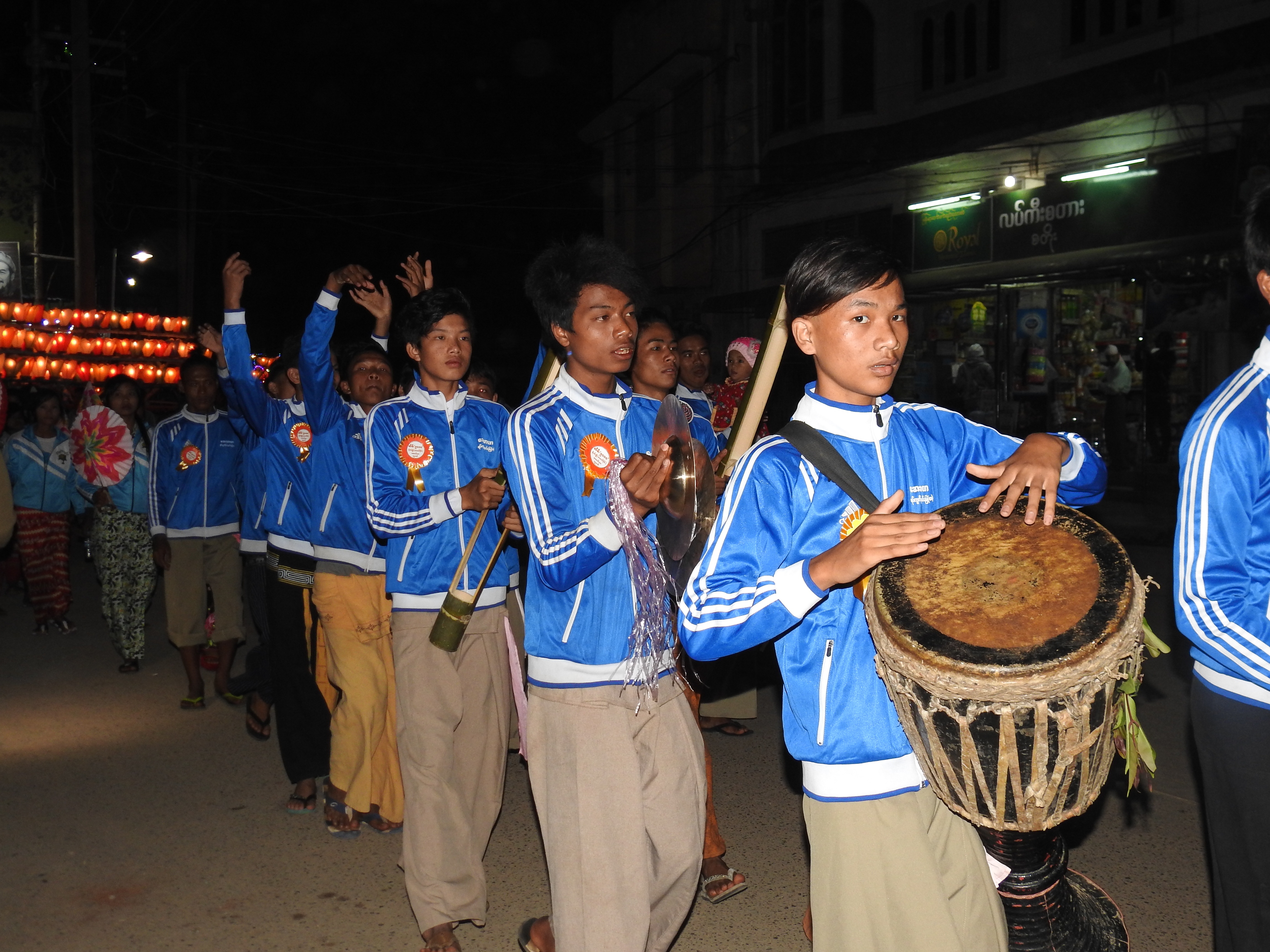 Liam, Chit and I were among them. I am not completely sure how this happened. I think we were trying to walk to the front of the procession and the street was too crowded. So we were suddenly next to young women dancing and men clapping pieces of bamboo together and clanging cymbals. Liam tried to match the dance of the women and the crowd seemed to love it. A group of older men then came toward us and showed us more dance steps.

For the next 3 blocks, we danced and attracted more videography than anyone else.

While many westerners come to see the balloons, none seemed to know about the procession. We were it.

It was a blast.

Liam then admitted that he was not up for dancing all the way to the pagoda and suggested that we go back to get the crew. Chit had made one more fun offer – he would take us to a small lake where we could see the fireworks without actually going to the crowded field. Imagine the Texas State Fair on Texas-OU game and double the density. Add falling fire.

That is a good scene to avoid.

So we went to this private spot and visited. The girls slept in the van while the rest of us chatted next to the small lake.

It turns out it takes 30-60 minutes to set up a balloon. We arrived just as one was finishing, so we resolved to see one and go home.

After around 65 minutes we could see some activity on the horizon toward the fairgrounds. Yes, something was rising. We called the girls to wake and join us.

That is when it stopped. I do not want to say “explode” or “caught fire” because we were not close enough. We DID see the 300 foot plume of smoke where the fire balloon was intended to rise.

We did not hear any ambulances, so that seemed like a positive.

But we know knew we would have to wait again. Another hour passed. Liam fell asleep on the ground while Chit told me about his family, including his wife’s grandfather who taught conversational French and had raised her mother alone (his wife died in childbirth).

[Note: while Liam, Chit and I were dancing, Susie, Wiley, Terrill and Virginia had a wonderful visit with Chit’s family that sounded as much fun as staring in a parade. Great English skills from excellent people.]

The fireworks effect from the balloons was unlike anything I have seen.  I attempted to take pitcures, but lacked a tri-pod, so they are not ideal.  Having said that, the tree-like effect is really cool. 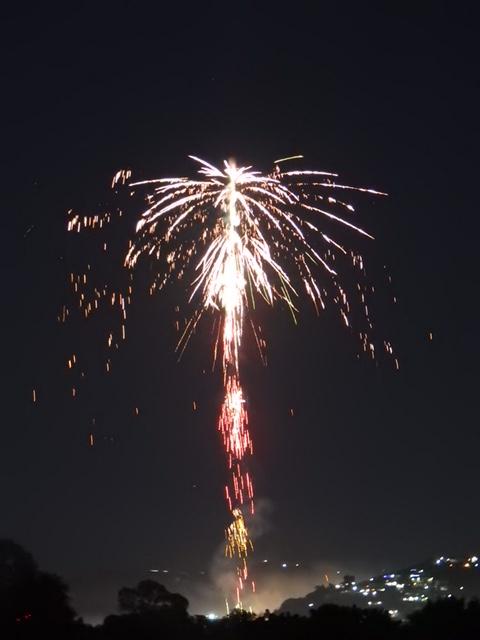 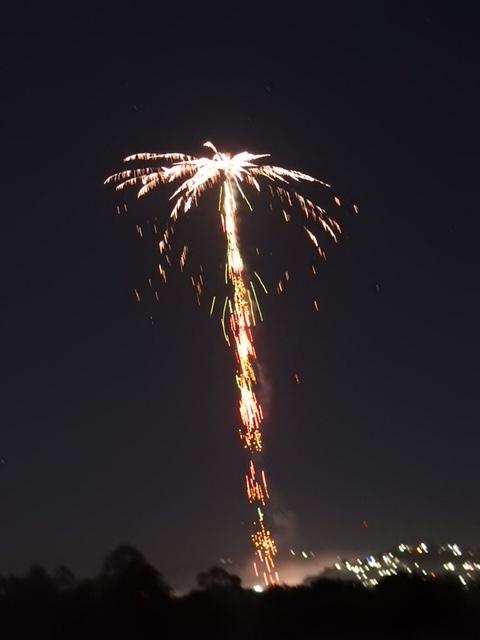 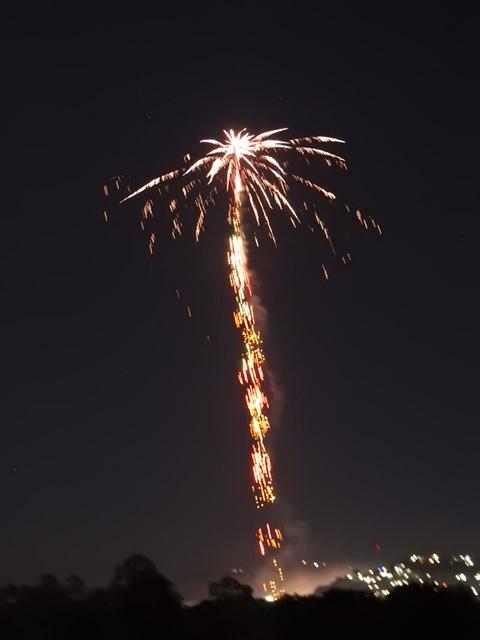 The return trip was also impressive. We had been told it could have taken 3 hours (had we gone all the way to the fairgrounds). With Mario Andretti, we were home in less than 1.

I hope to augment this blog later with more photos. We have had a bad couple of days of connectivity, ranging from “1990’s dial-up” to “no wifi connection” to (I kid you not) no electricity for 3 blocks.

But the summary is that we had a unique experience at a singular festival and did not catch fire. Not a bad day.

PS Susie and I are assuming that we did not get as sick as the kids because we must have encountered their nasty bacteria in our past and have superior gut bacteria. I never thought that would be something to brag about. I could never imaging this sentence, “Hello everyone, I just want you to know that in addition to winning the Nobel Prize, I also have exceptional gut bacteria.” But it was nice to avoid the suffering of the younger ones.