Driving to Inle - No Small Adventure 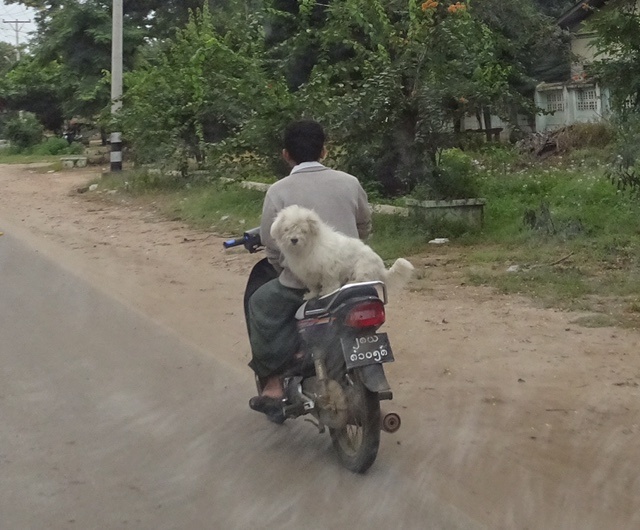 Today is one of the blogs that will make you happy you are in your home and not part of our adventure.

Today was a transition day and these can be tricky. They can be tricky in the US. They become trickier when you introduce a language barrier. They become events to dread when you are here in a country with no English, terrible infrastructure and questionable transportation.

But not here. The government cut a deal with Japan to sell them cars. To be clear, Japan can and does make cars with steering wheels on either side (the US buys a ton), but for some reason the powers that be here said, “Naw, we’re good.” So a nation drives in a way that makes a sane person nervous.

Of course, this is also a nation that thinks that this mode of transportation is a good idea, so how can I complain about steering wheels? 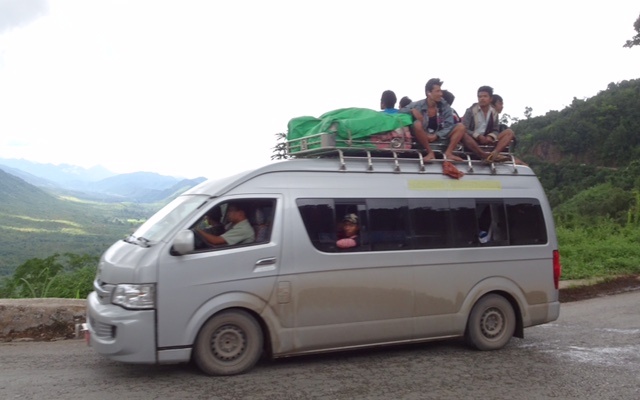 Today, our agenda was to drive from Bagan to Inle Lake, hike to a monastery and check into our new hostel. As you might imagine, we were OK leaving our hostel in Bagan given 1) the 200 foot hike to the bathroom and 2) Wiley’s reluctance to make eye contact with any of the other guests.

I saw that the drive would be 215 miles. No small task. In fact, it is almost exactly the same distance from Camp Champions to Houston, a drive I have made at least 30 times. That is a 4 hour trip if you stop at Hruska’s for a kolache, some gas and a bathroom break.

Ah, but we are in Myanmar.

They estimated 6 hours. In retrospect, I really admire their optimism. The entire ordeal would require 9 hours.

Let me provide some explanation here. First, the roads here are poor at best. They are attempting to widen and improve the highways, but their methodology is less than ideal. The vast majority of road crews are elderly women placing stones by hand and then pouring tar over them. 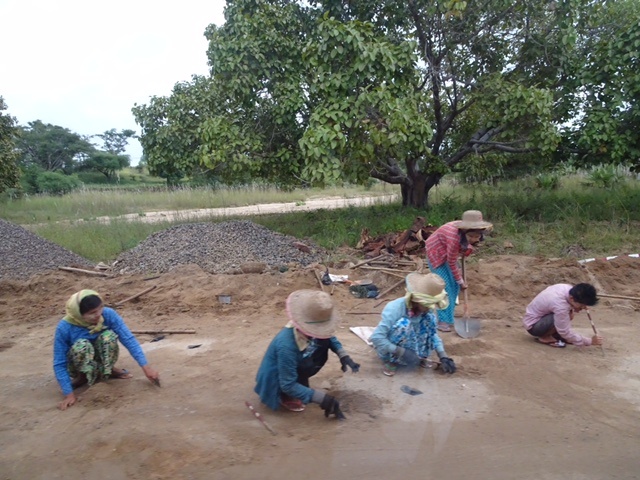 They then pour gravel over the tar and a steamroller (usually driven by the only man at the site) packs it down.  Here is a picture of the tar-preparation system. 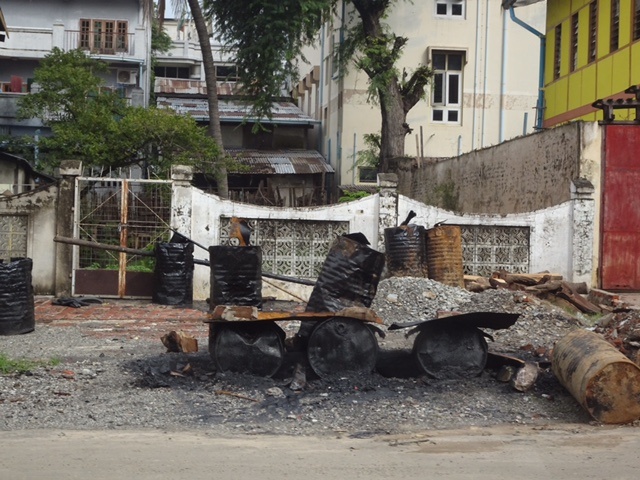 The vehicle we were in was a Toyota with a LOT of miles on it and a driver who spoke no English at all. I, however, did not worry about this. He was a professional and knew our final destination. He would get us where we needed to go. What was there to worry about?

Nothing. Except that rock he backed over.

Suddenly, the AC was off. I started to sweat and wondered what was happening. Susie (guessing) speculated that he turned of the AC to help the car climb. We soon gleaned that he turned of the AC because he wanted to keep his window down to listen to the loose rattling sound in the wheel. While we had not initially noticed it, once we realized that he was concerned, the rattling was impossible to ignore, especially when he stopped and got out and kicked the wheel multiple times. [Note: I am actually a believer that a good kick is worth the effort. If I were a young man driving 6 Americans who I could not speak with, I would have kicked and uttered a brief prayer to Buddha or Krishna or whoever else I could think of.]

When he came back to the van, we asked (more accurately, pantomimed), “OK?”

“”OK, No problem” he responded – thus exhausting the sum total of our shared vocabulary.

We drove up a windy mountain road (without a guard rail) for another 45 minutes, meanwhile enjoying the rattling.

He stopped again and pushed the van from side-to-side for 5 minutes. Once back in the van, he could not even bluff an “OK”. When we entered the next town, he started to ask everyone he could find a series of questions. Clearly, he was looking for a mechanic and a shop.

We eventually ended up here. 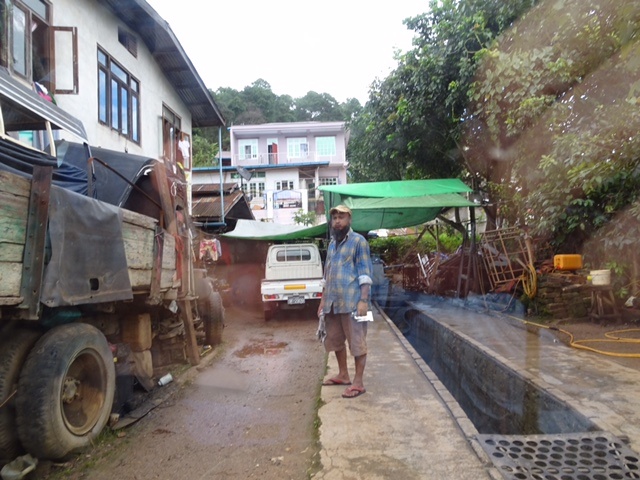 And our safety relied entirely on this man. 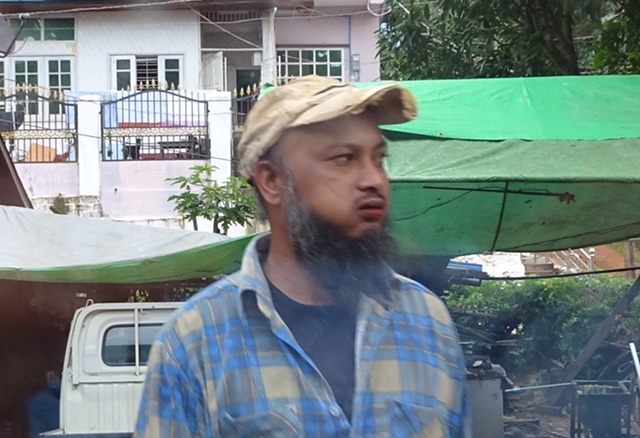 This man was chewing beetlenut – a stimulant that stains your teeth red.   He did not look that focused. His shop looked, well, less than what you might expect from a Volvo dealership.

But he would be would savior. Admittedly, his initial diagnostic technique was odd. He leaned into the van and rocked it as much as he could. I could never divine the nature of the failure, but he managed to get us moving in 45 minutes. We bought cookies from the small shop across the road.

Susie managed to get our driver to call our contact who changed our agenda from a 4:30 hike to a 6:00 meeting.

We arrived around 5 rather than 2:30. But we did discover that the new hostel was excellent. 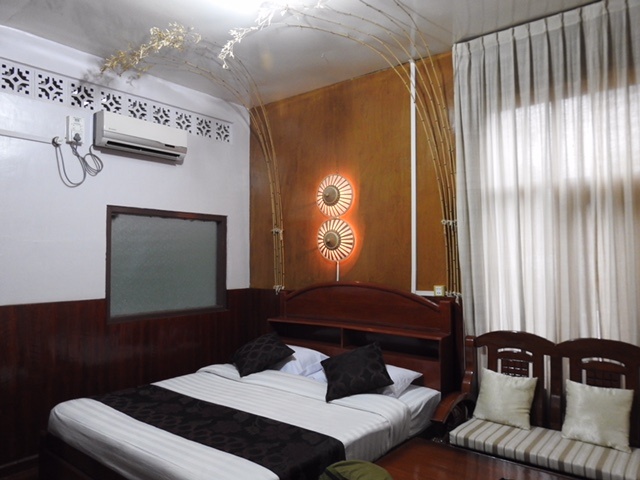 We were so excited that we decided to do some laundry. 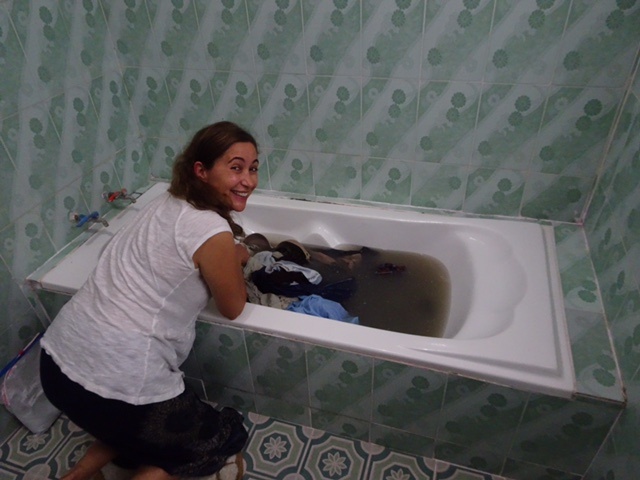 Your first thought might be, “wow, that looks awful.”. Our response would be, “We are using a bathtub connected to a toilet IN OUR ROOM!”

Yessir, the lap of luxury.

Tomorrow, we get a new driver and an English speaking guide.

PS Despite our travails, we did see some things worth sharing.

When we were not worried about the road, we saw some amazing views. 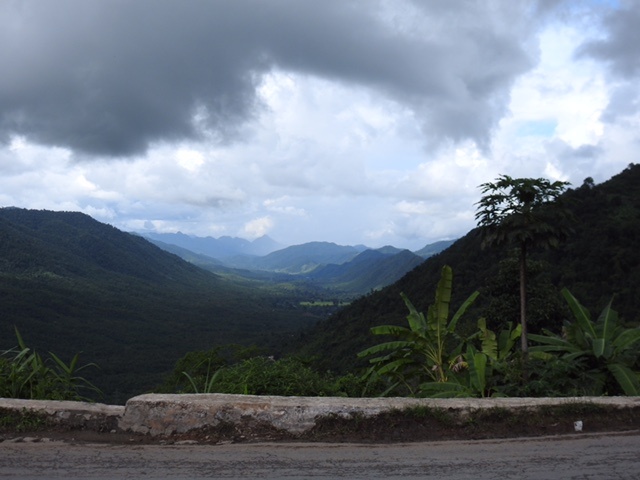 I have no idea if this is a boat or a pagoda, but I really like it. 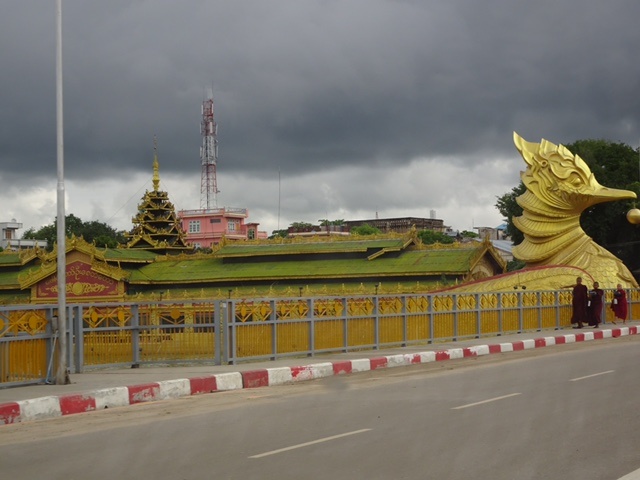 Finally, the dog that I included at the start of the blog showed some superior balance.