Deer Violence and A Cool Gate 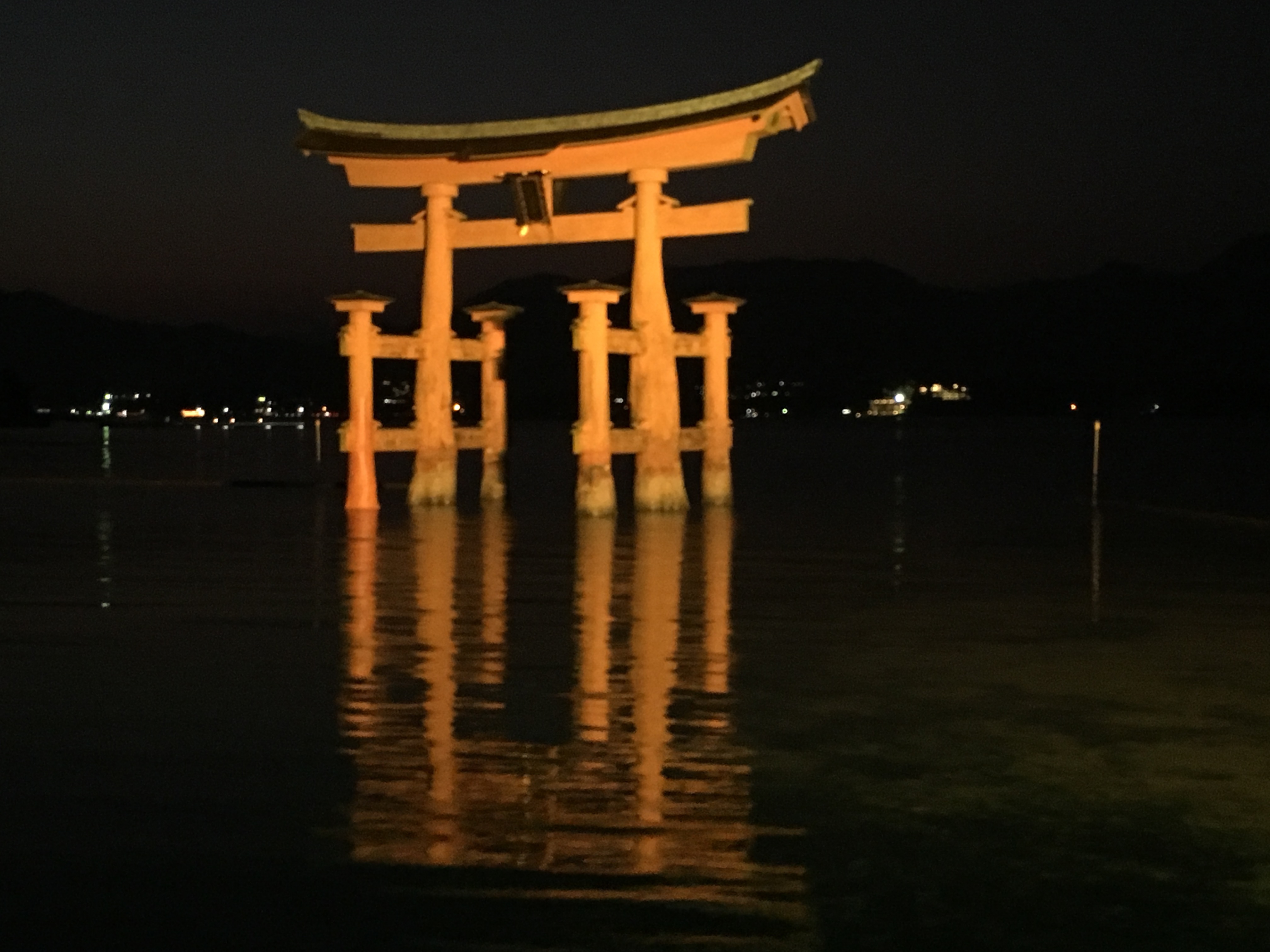 My previous blog on Hiroshima was a long one, so I decided to create a bonus blog to describe the ending of our day visiting the sacred island of Miyajima and the famous Itsukushima shrine.

Before I get there, I would like to update you on the most confusing of our hostel stays. At one level, this place was the least suitable for Susie and me. The kids were in a room with two bunk beds and a locking door. Sure, the toilet was down the hall and they had to walk down 1-2 flights to shower (depending on gender), but it was otherwise the lap of luxury.

Susie and I were in a dorm/office style room. I say “dorm” because we shared it with 6 other people. I say “office” because our beds were separated by office-styled partitions. We were in separate cubicles. 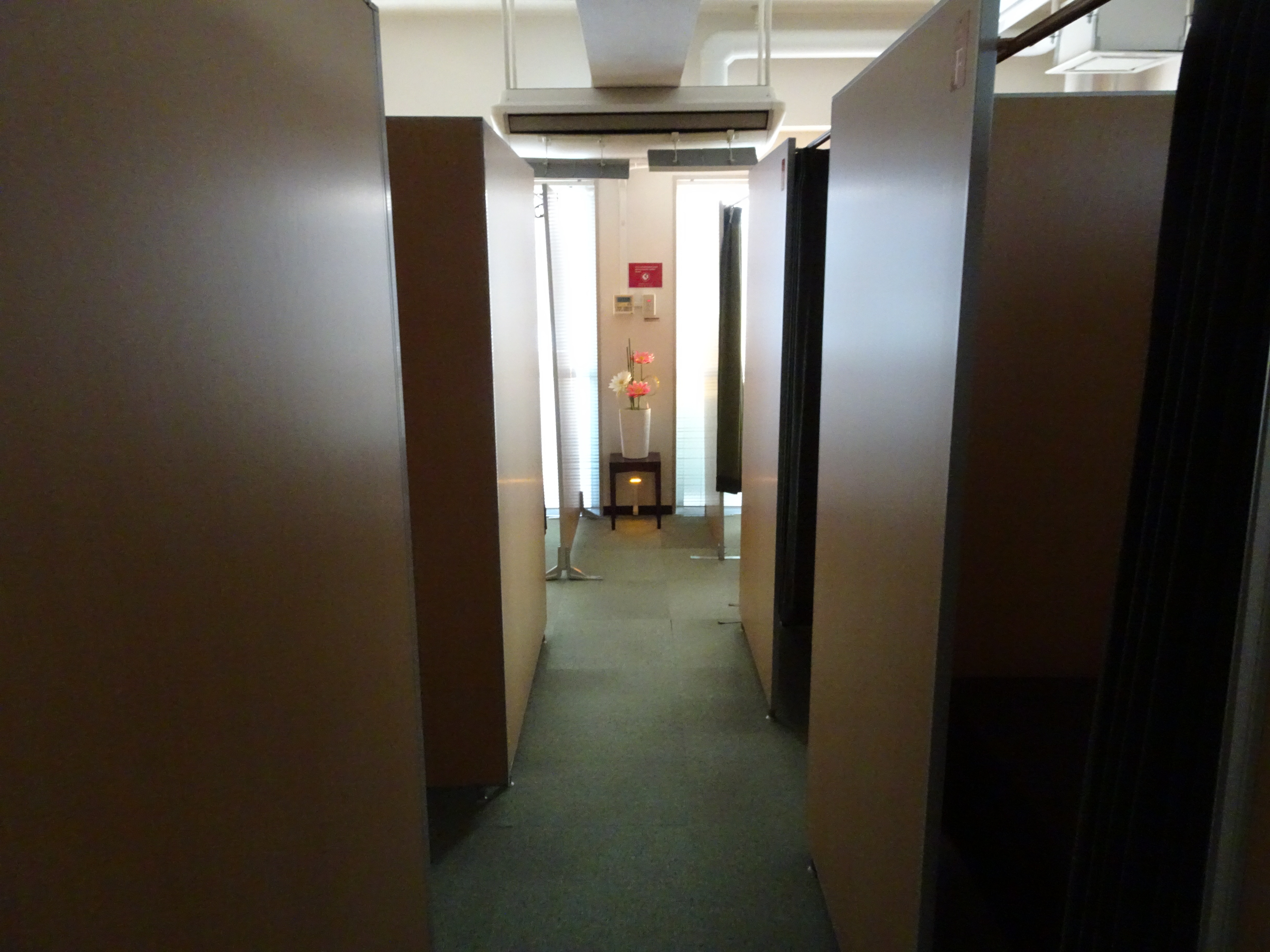 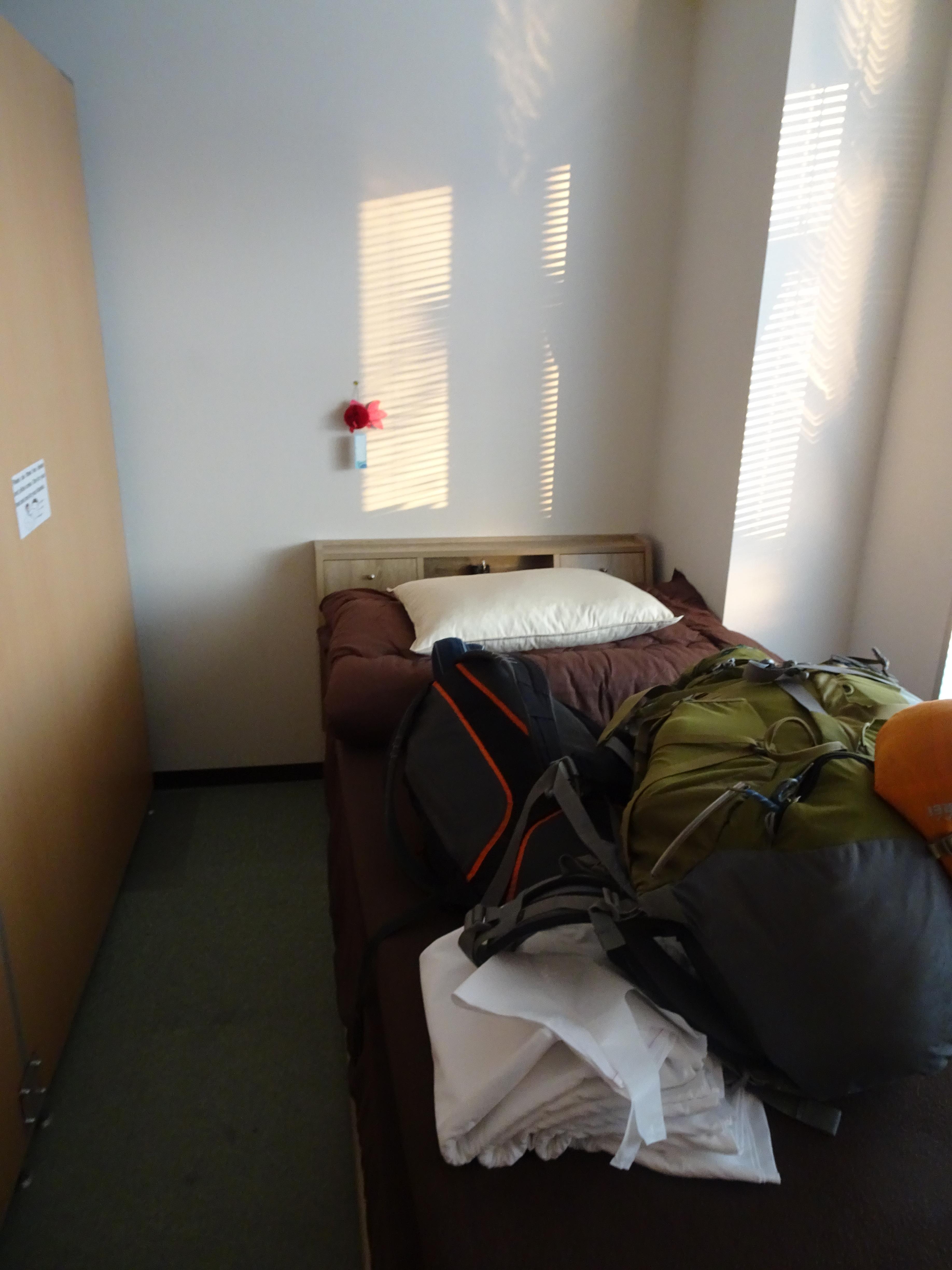 But this place also had the best common space we have seen, with a kitchen, several comfortable places to sit or work, and complimentary Japanese tea. They had a miniature convenience store in the lobby. It successfully pushed us into the common space, which I like.

The common room had a sound system the played Japanese music that was occasionally dissonant and otherwise pleasant.

Speaking of the music, please allow me to comment on an odd aspect of Japanese dining: the music selection.

We have only heard Japanese music in one restaurant here. Even the traditional onsen (spa) we visited in Mt Fuji had an odd musak that played Bob Marley followed by “Que Sera Sera”. One noodle shop played surfer music (with no other décor to reinforce the theme).   We have heard “You’ve Lift Me Up” from “Officer and a Gentleman” at one and Japanese covers of Taylor Swift at another. At no time did the speed or nature of the music match the meal. If the meal was a subtle, relaxed affair, we might get disco. At a bakery, we heard bebob jazz.

It reminds me of the movies from the 1950’s or 1960’s where the soundtrack and the action seem to bear no resemblance to each other. The scene might be a group of heroin addicts talking, but the music might be a lilting harp melody. The original Star Wars in the 1970’s helped elevate the art of music that enhances and complements the action. Now, we expect to have a soundtrack that pairs like a fine wine with dinner.

Now, lets talk about this shrine. Because we had already spent the day in Hiroshima (Go Carps!), we arrived at the island just after sunset. While this precluded our ability to see all the structures, we did not mind. We have seen lots of shrines, but this one really becomes special at night.

Built in the bay because the island is “too sacred to be built on”, this version of the torri arch is the 11th of its kind (the original dates back to the 6th Century). At night it seems to float rather than sit heavily. This is a structure that is 50 feet high and 80 feet wide. It is not driven into the soil, but stands as a free structure. The vermillion color and its reflection create a transcendent effect. [Note: impressed that I know the color vermillion? It read it in a brochure.] 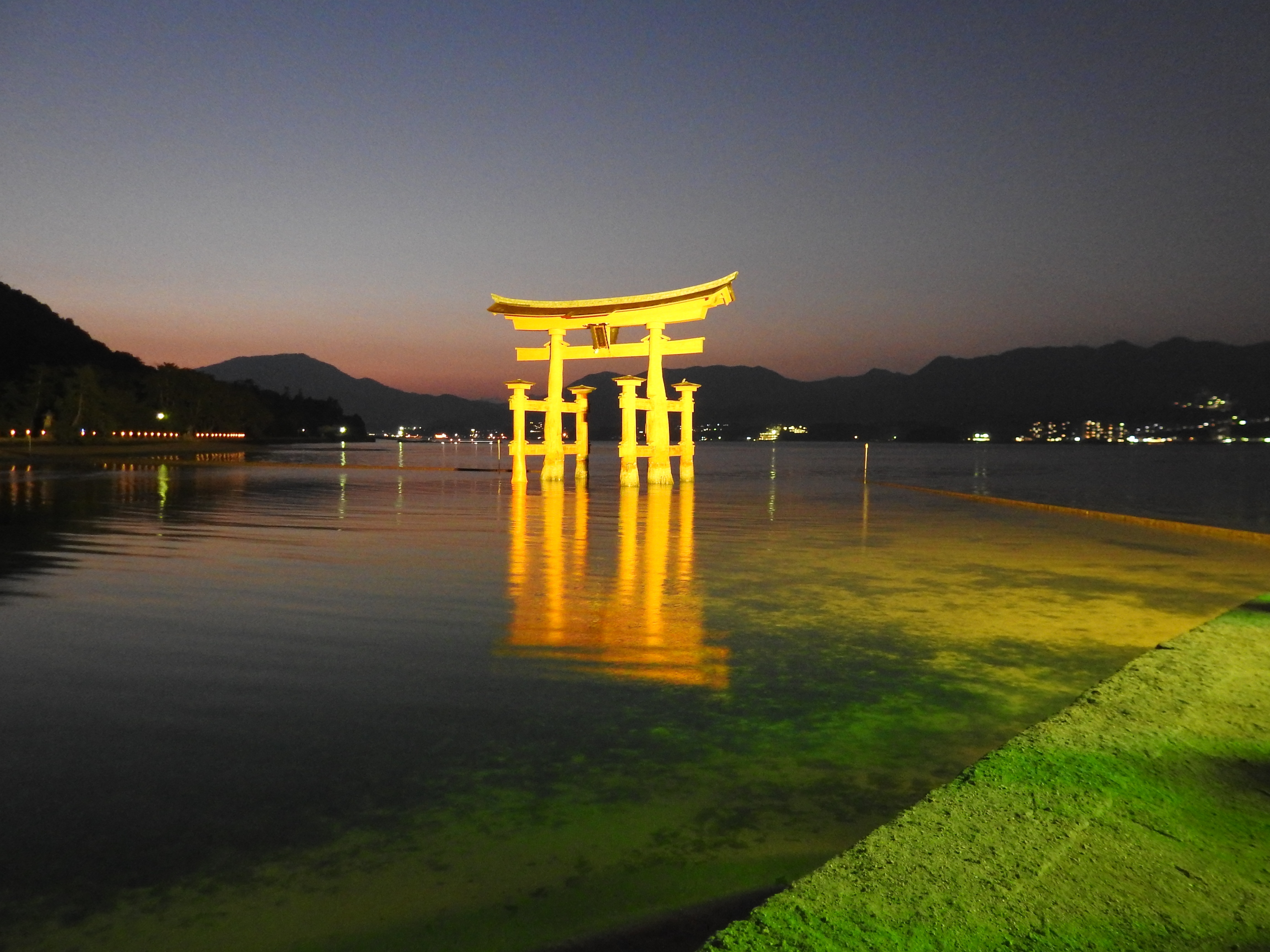 We also tried to photograph a pagoda in low light. 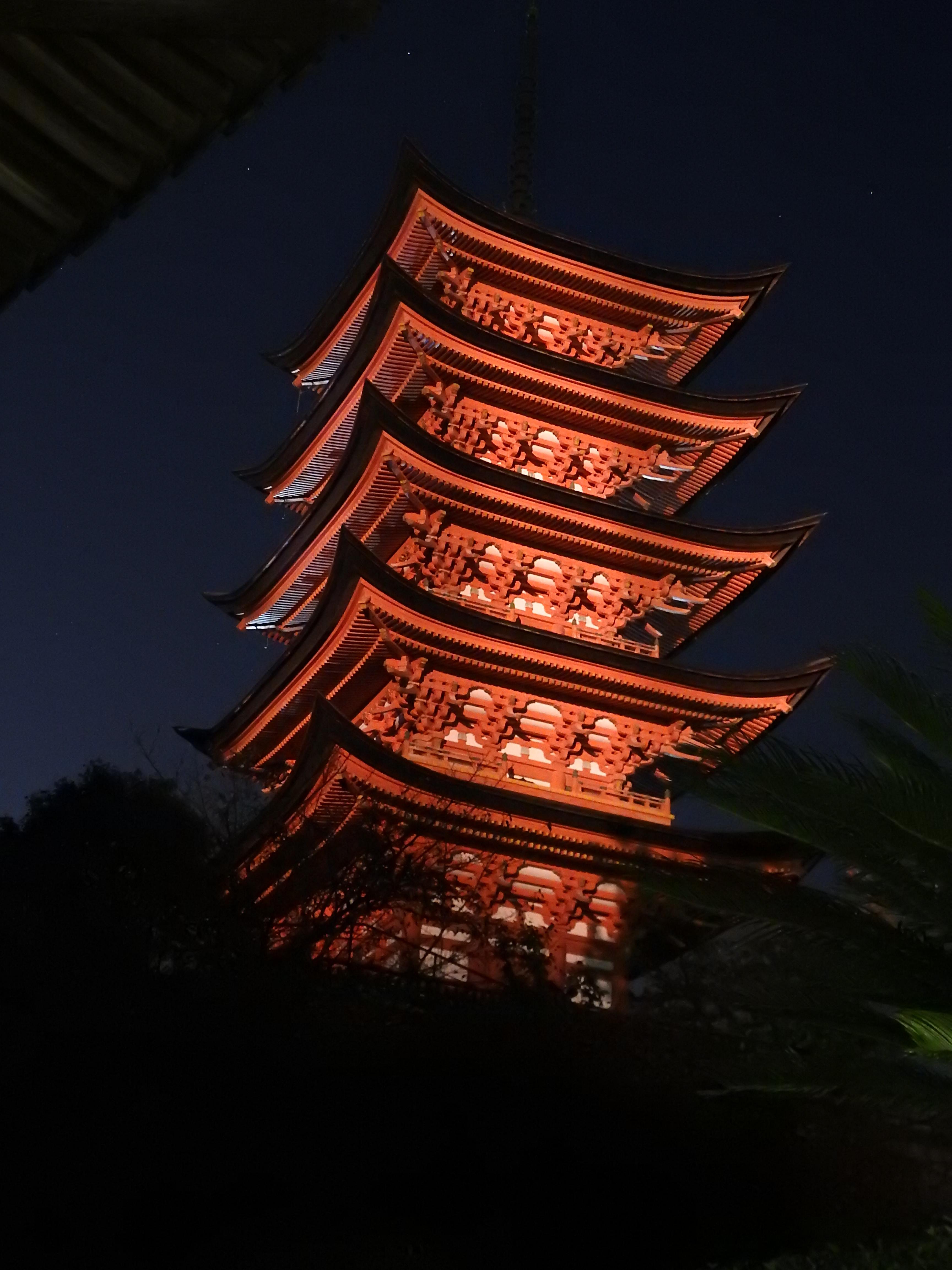 But the high point of the visit was the octopus and the deer.

OK, perhaps I am over-promising. If you are hoping that a killer octopus came out of the water and attacked a deer (which, admittedly, would be pretty awesome to see), you might be disappointed.

But then again, perhaps not. After all, there was an attack. The only difference is the nature of the attacker.

Once again, we have a shrine with a bunch of deer walking around and begging. Remember how the Shinto believe that deer are messengers from the gods? Well, they are making deliveries on Miyajima as well as Nara. In Nara, we had no food with us.

On Miyajima, we had just bought some grilled octopus on a stick and roasted corn.

This would prove to be a big difference.

As soon as Susie, Terrill and Virginia had purchased the food, they made a new friend that followed them for about 100 meters. Virginia was feeding a few kernels of corn as they were walking. They came to a stopping point, so Susie wanted to take a picture of the girls with their new friend. The camera was the opportunity that this messenger from the gods was looking for. 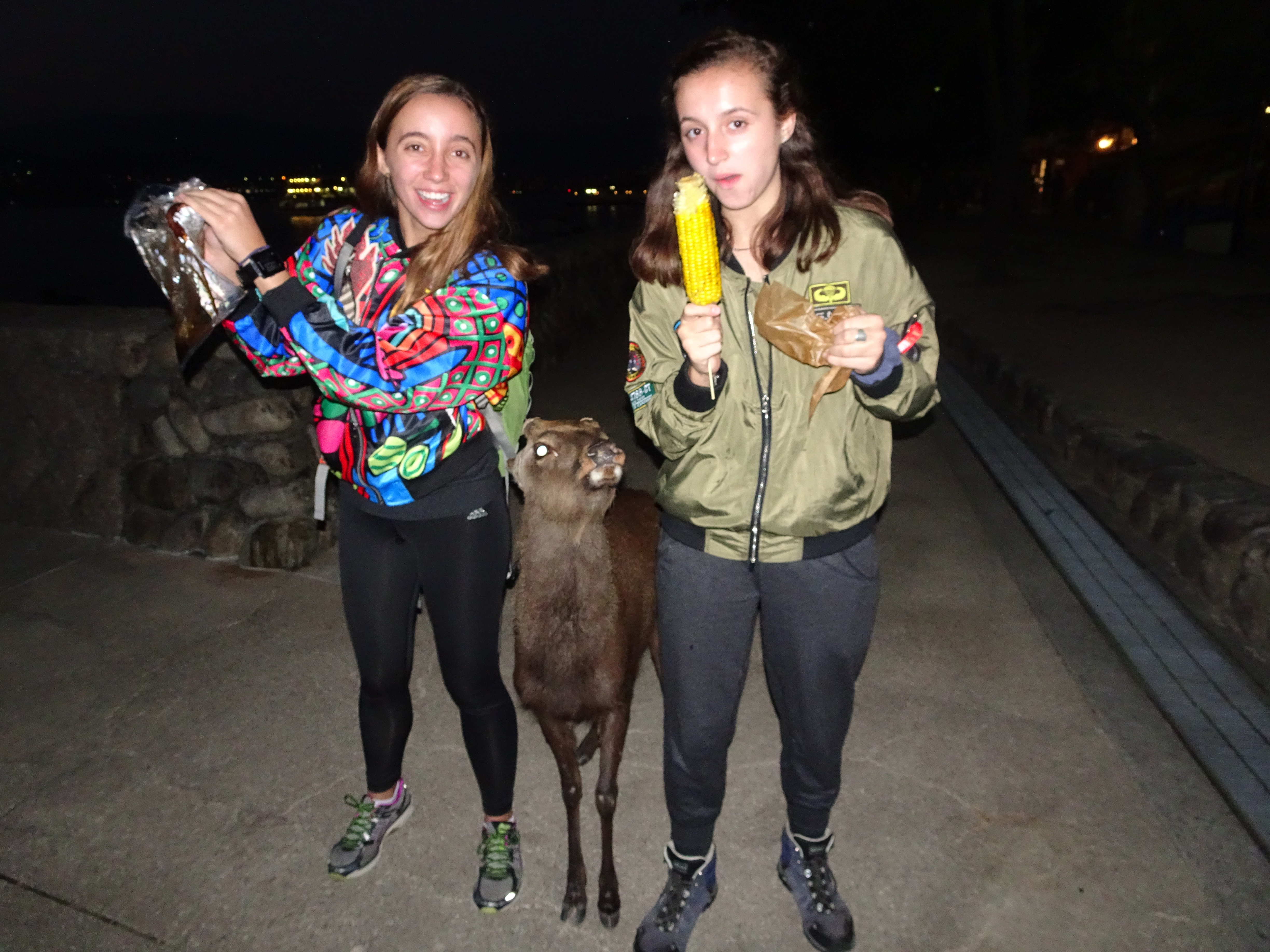 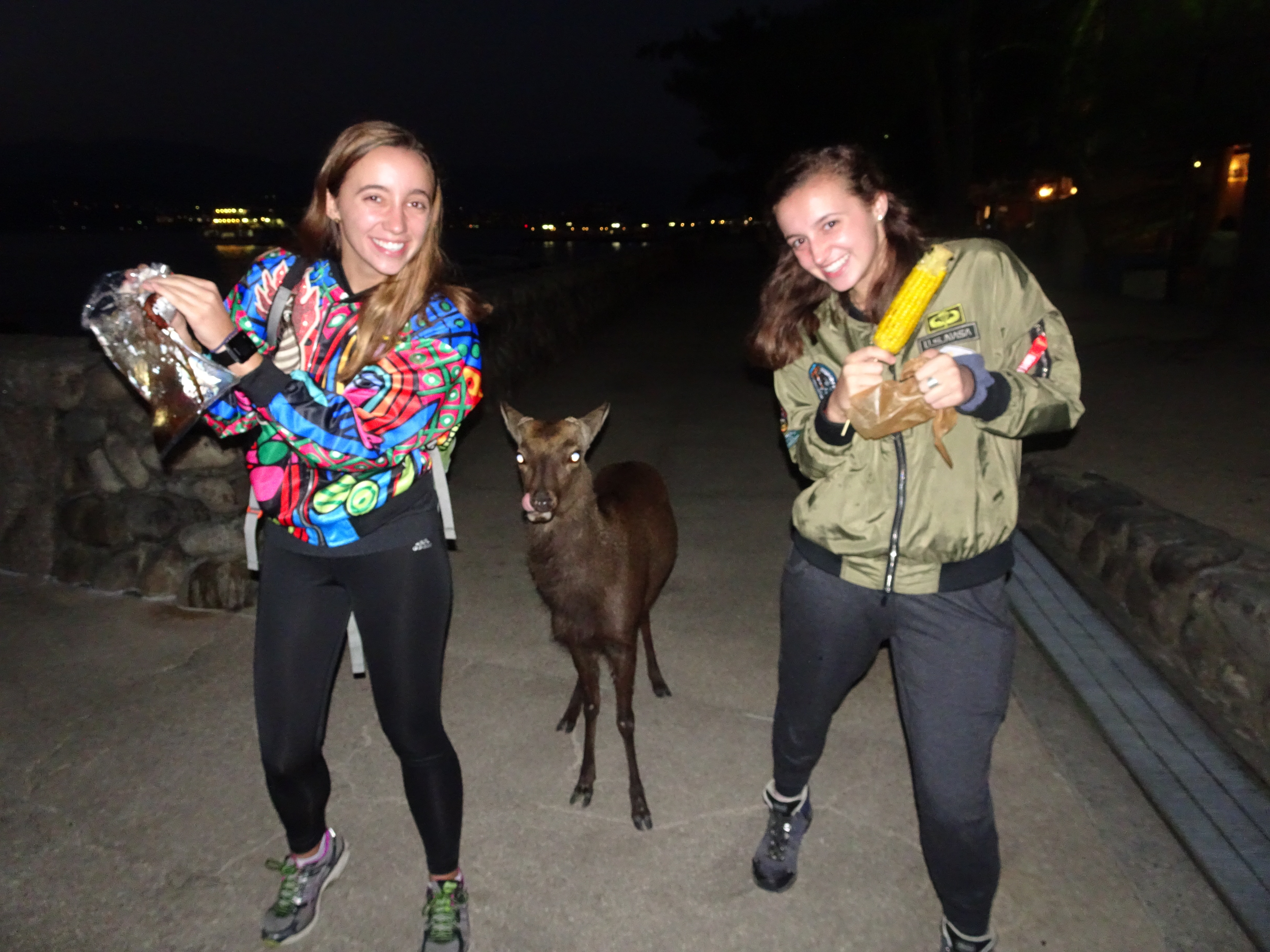 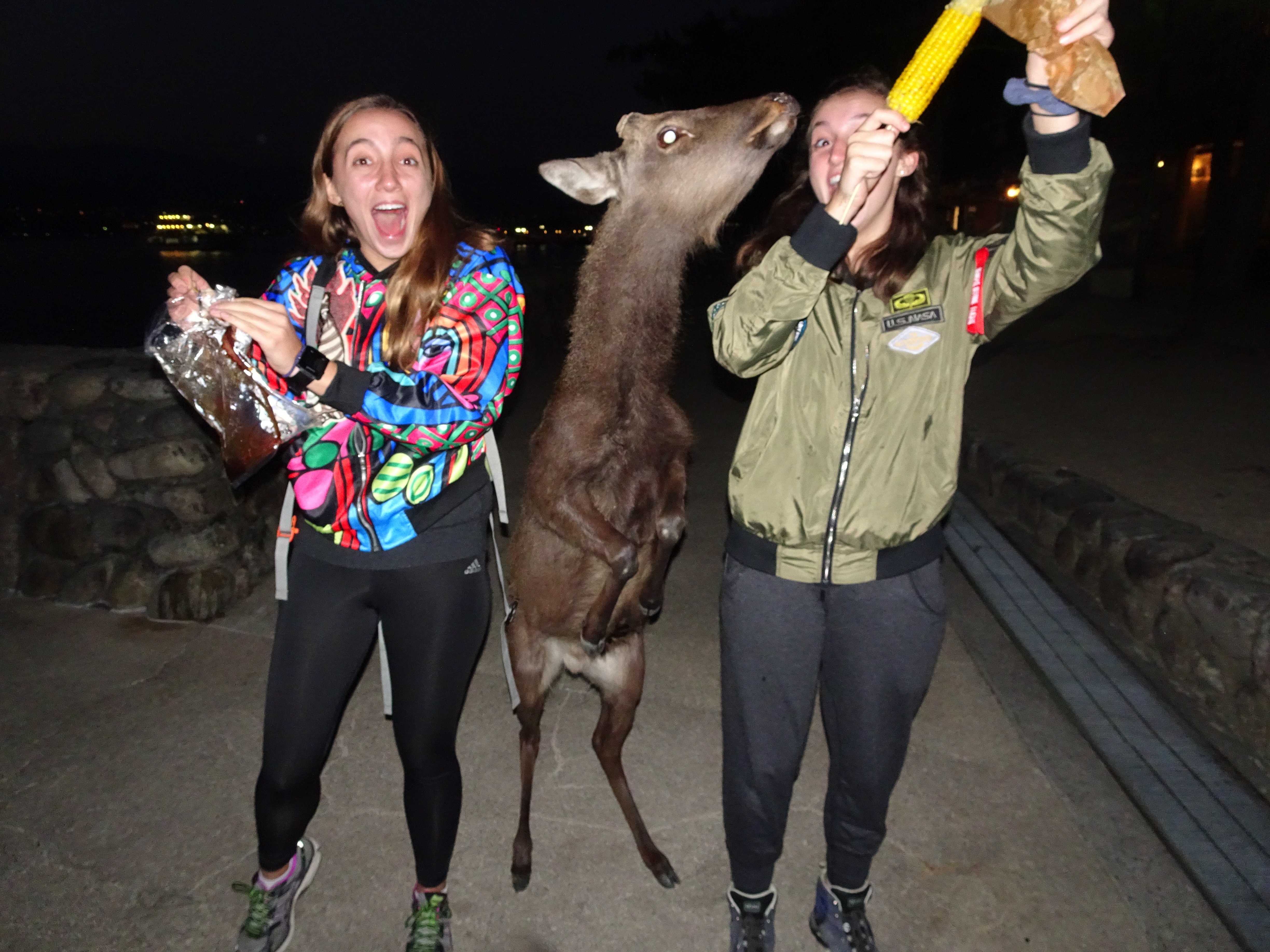 As she put it, “the only think louder than my jacket was the scream I let loose when Bambi jumped me.”

I cannot write a better ending than that.