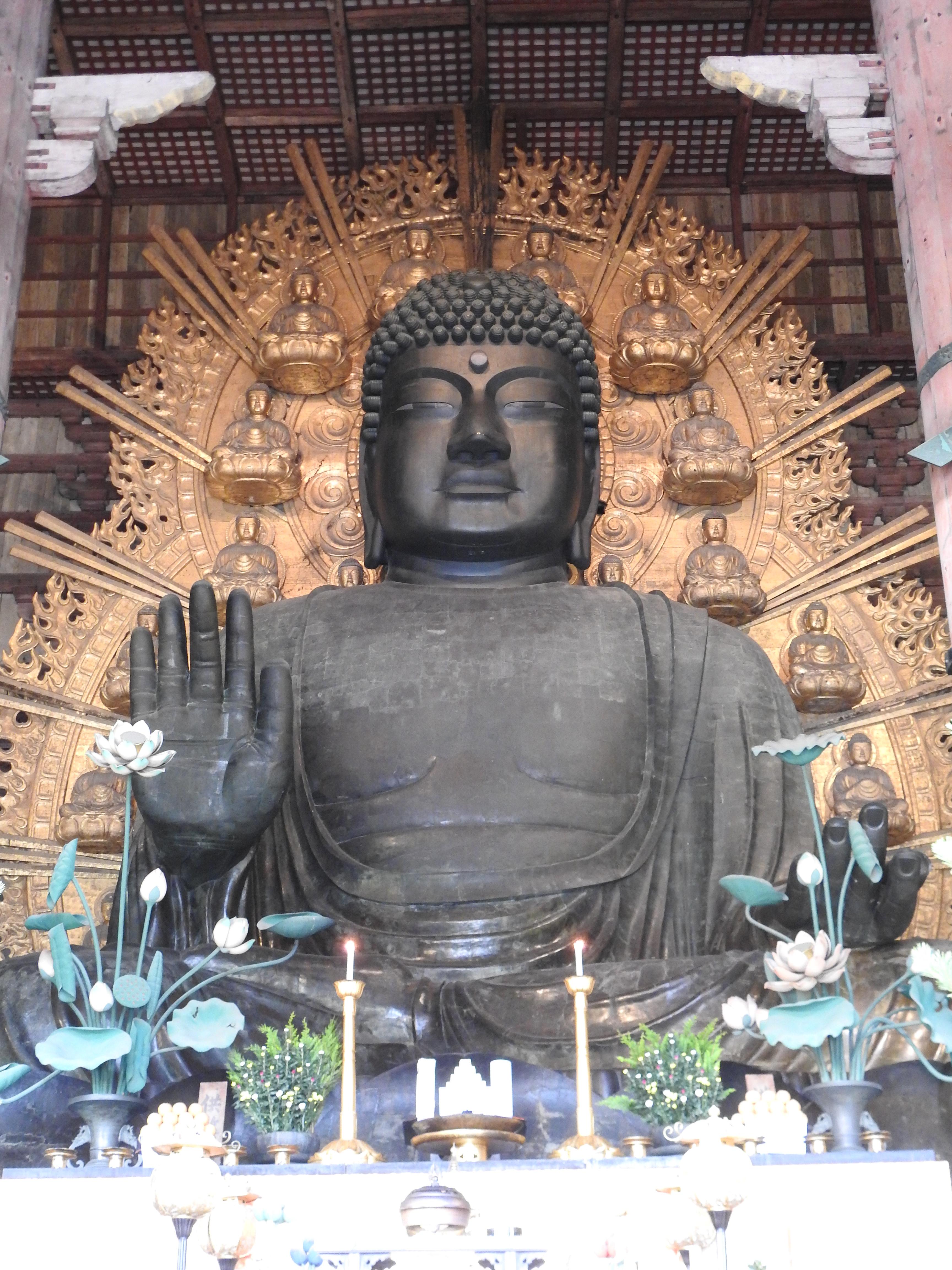 The not so surprising news about our trip to Nara is that we visited shrines and temples.

The truly shocking part is that our kids loved this particular visit.

I had not researched Nara, so I had only overheard a few comments from Susie about deer. You heard me right, deer. The animal that are everywhere in the states are celebrities in Nara. [Note: the US deer population in the early 1990’s was around 500,000. It is now between 25 and 30 million. So if you think that you see a lot of them, you do.]

Deer are considered to be messengers of the gods in the Shinto religion, so the animals are treated with kindness that borders on spoiling. They walk among tourists awaiting “deer cookies”, for which they will bow (which is admittedly adorable).

Susie thought this sounded like fun and mentioned to Altus that she wanted to visit the deer temple. He thought this a good idea and we came here after seeing the shrines of Ise. We arrived later in Nara than we had planned. We had thought the train trip would take 45 minutes. In a way, we were right. Each of the three trains trips took roughly 45-60 minutes. So our effort to arrive around noon became more like 3PM.

As we checked into the hostel, the nice manager said “see temples tomorrow, right?” We, however, had planned on knocking them out that day and were disinclined to allow a 3-hour delay to stop us. We walked to the site of the deer temple.

We were misinformed. The deer are merely the sideshow. Nara features some spectacular structures, including the worlds largest bronze Buddha statue inside a temple that was the largest wood building in the world until 1998 (see the photo at the beginning of this blog). 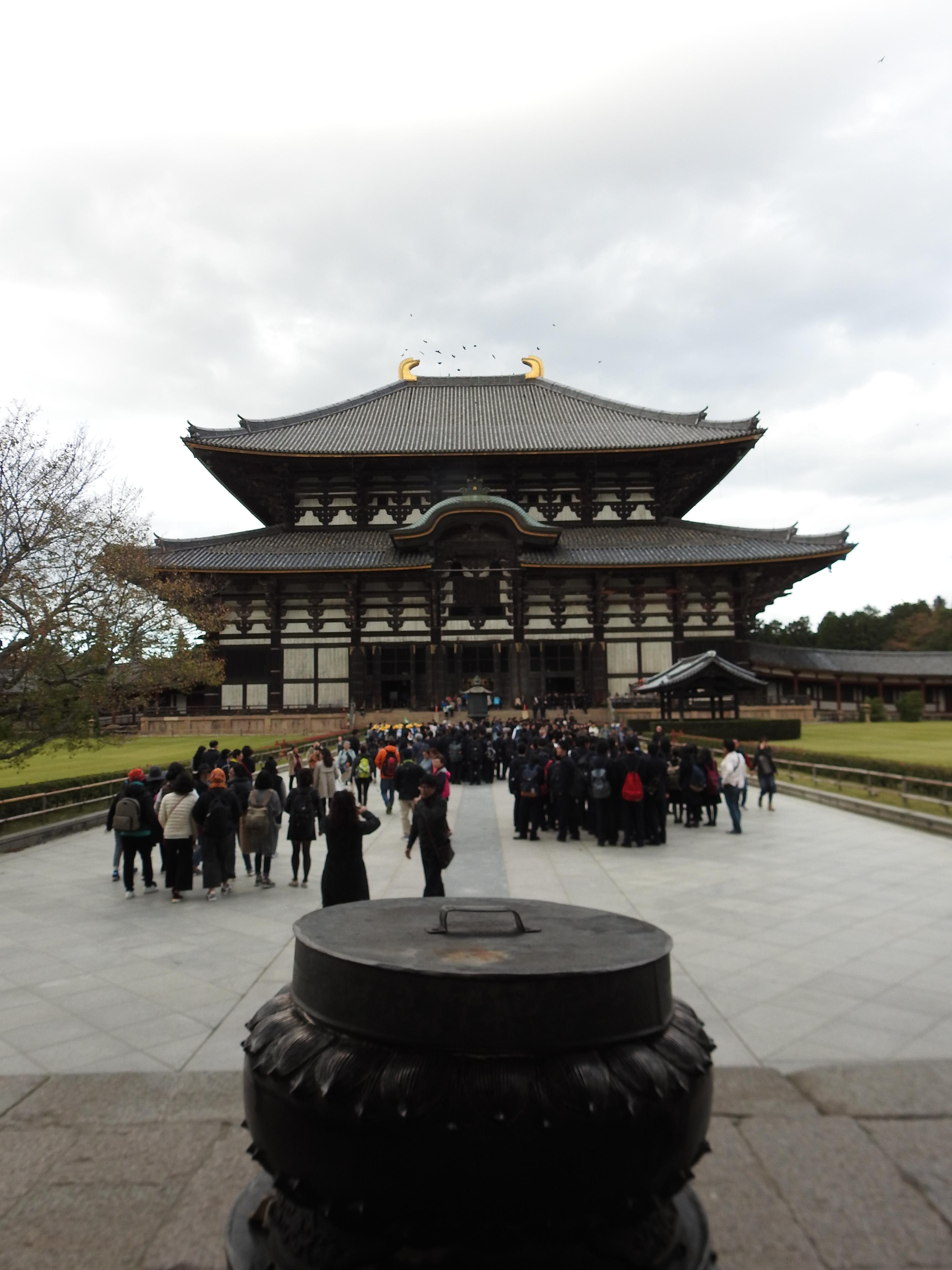 This structure is enormous and awe-inspiring. Not easily impressed, Liam nonetheless admitted that “this place is legit” and “this actually inspires awe in me”. 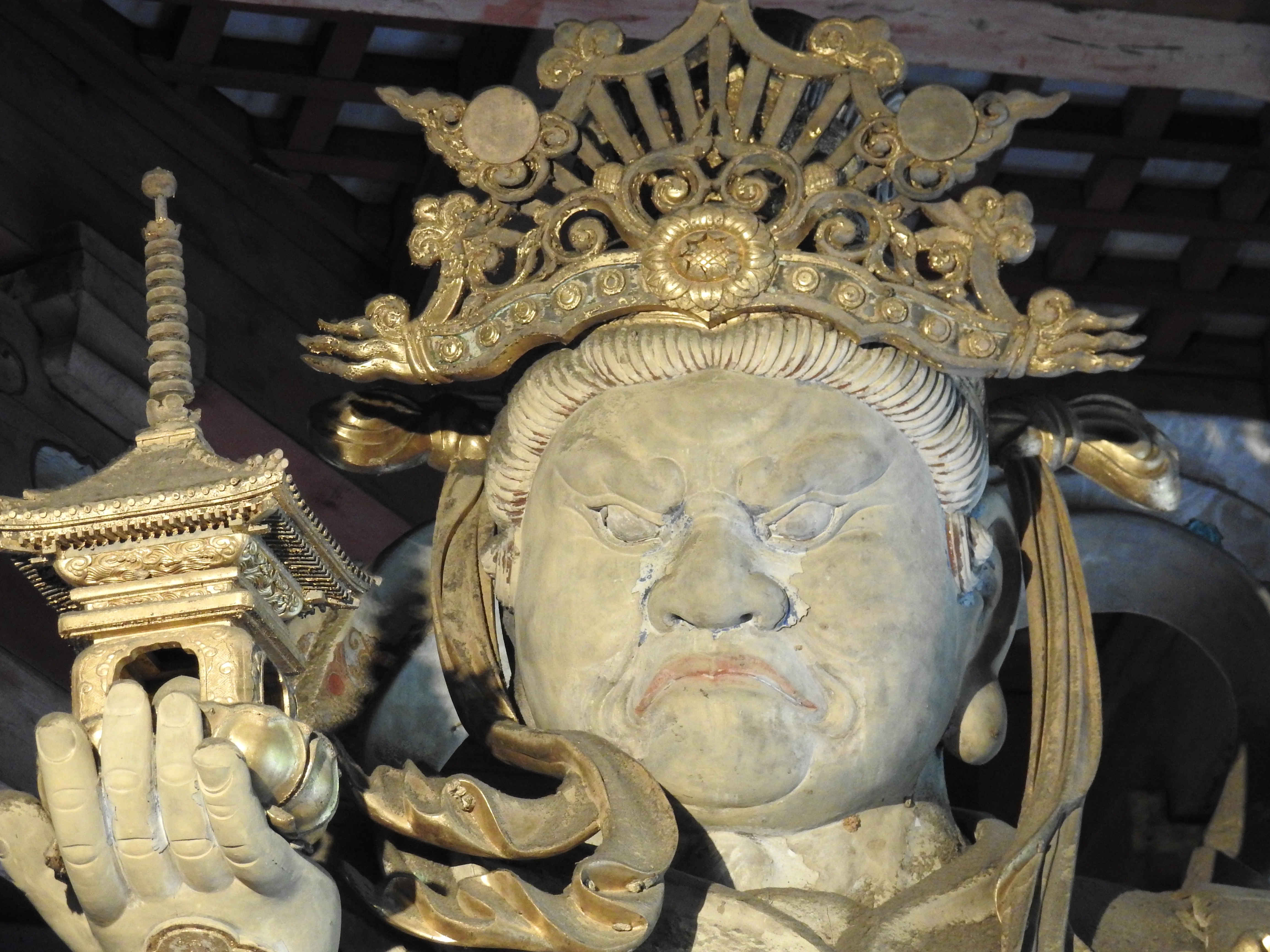 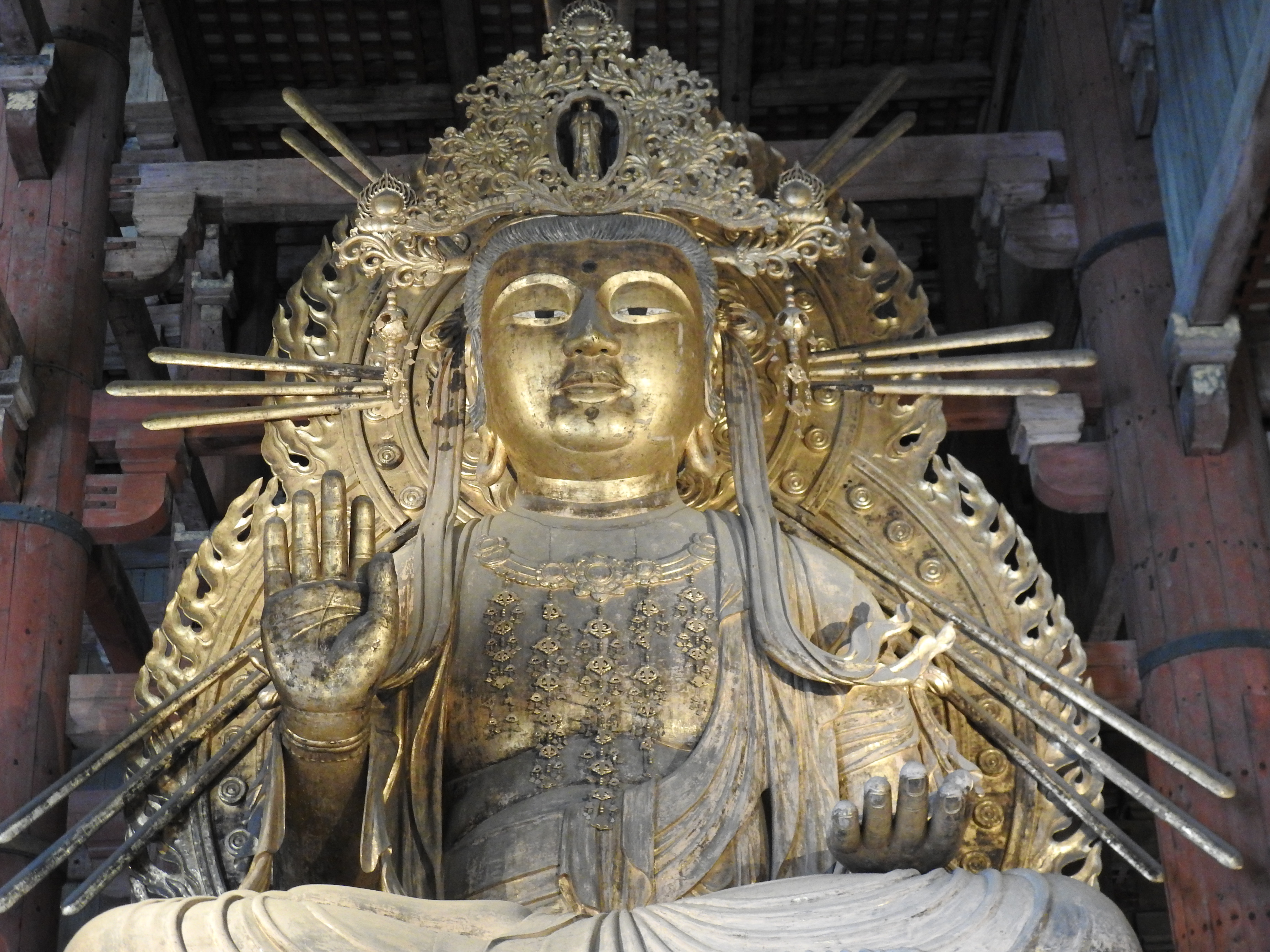 I must admit that this place would have been impressive even if we knew what to expect. But we arrived at this site assuming it was a big petty zoo, not a UNESCO World Heritage site, so we were floored. These buildings really packed a punch.

Even beyond the Great Buddha Temple, the park was worth visiting. It also had a Shinto shrine and other structures that I could not fully understand given the lack of English descriptions. 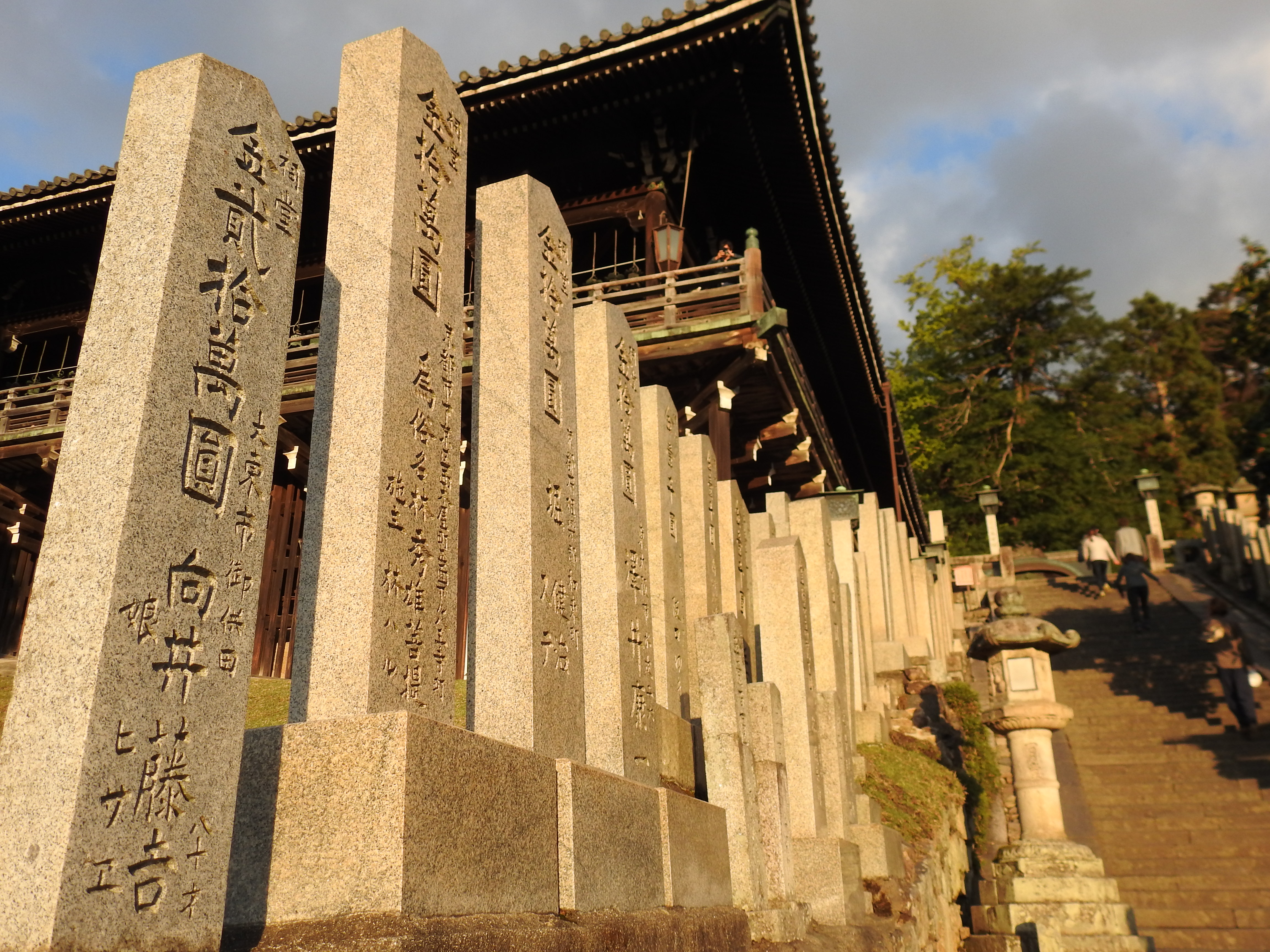 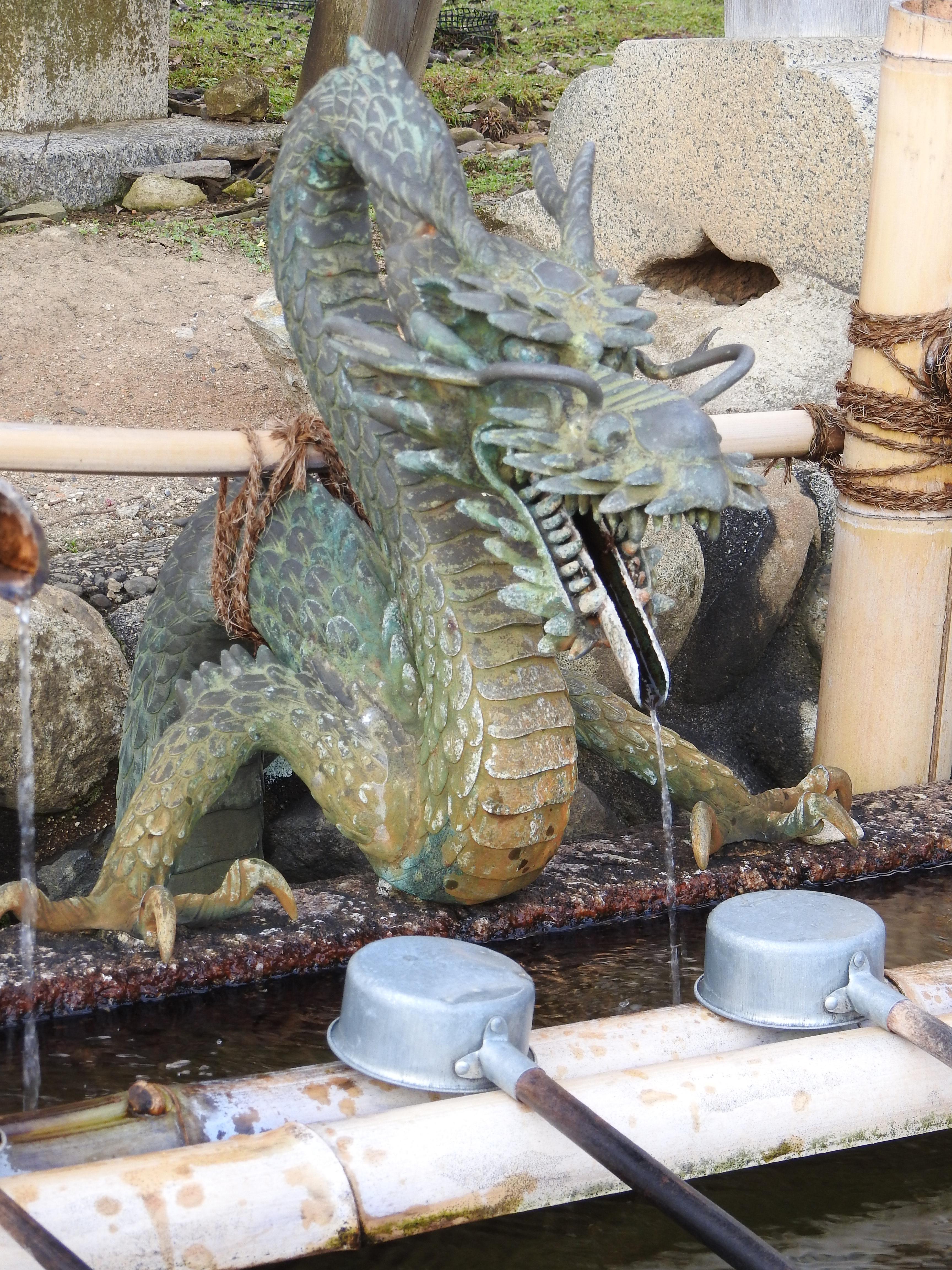 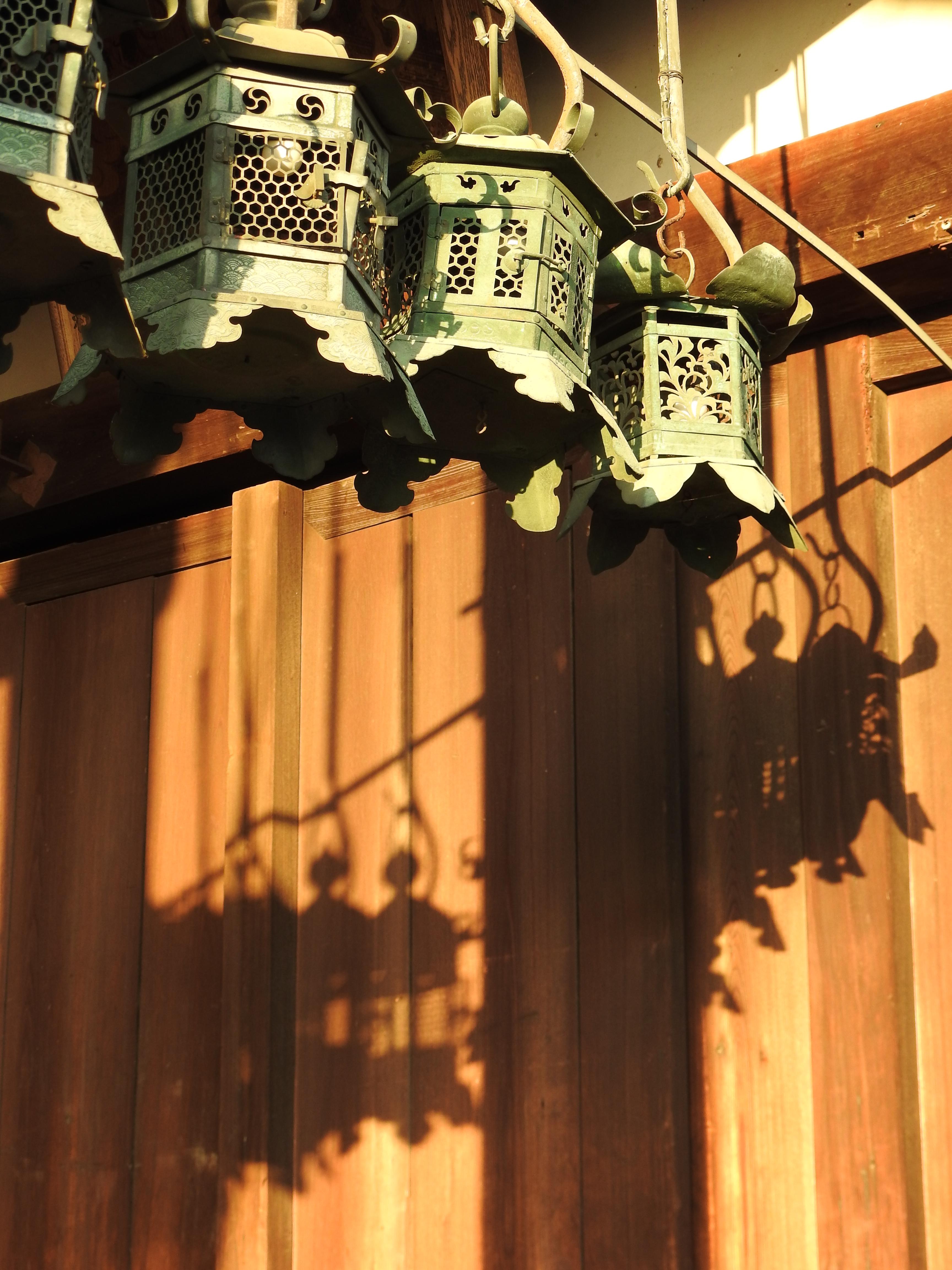 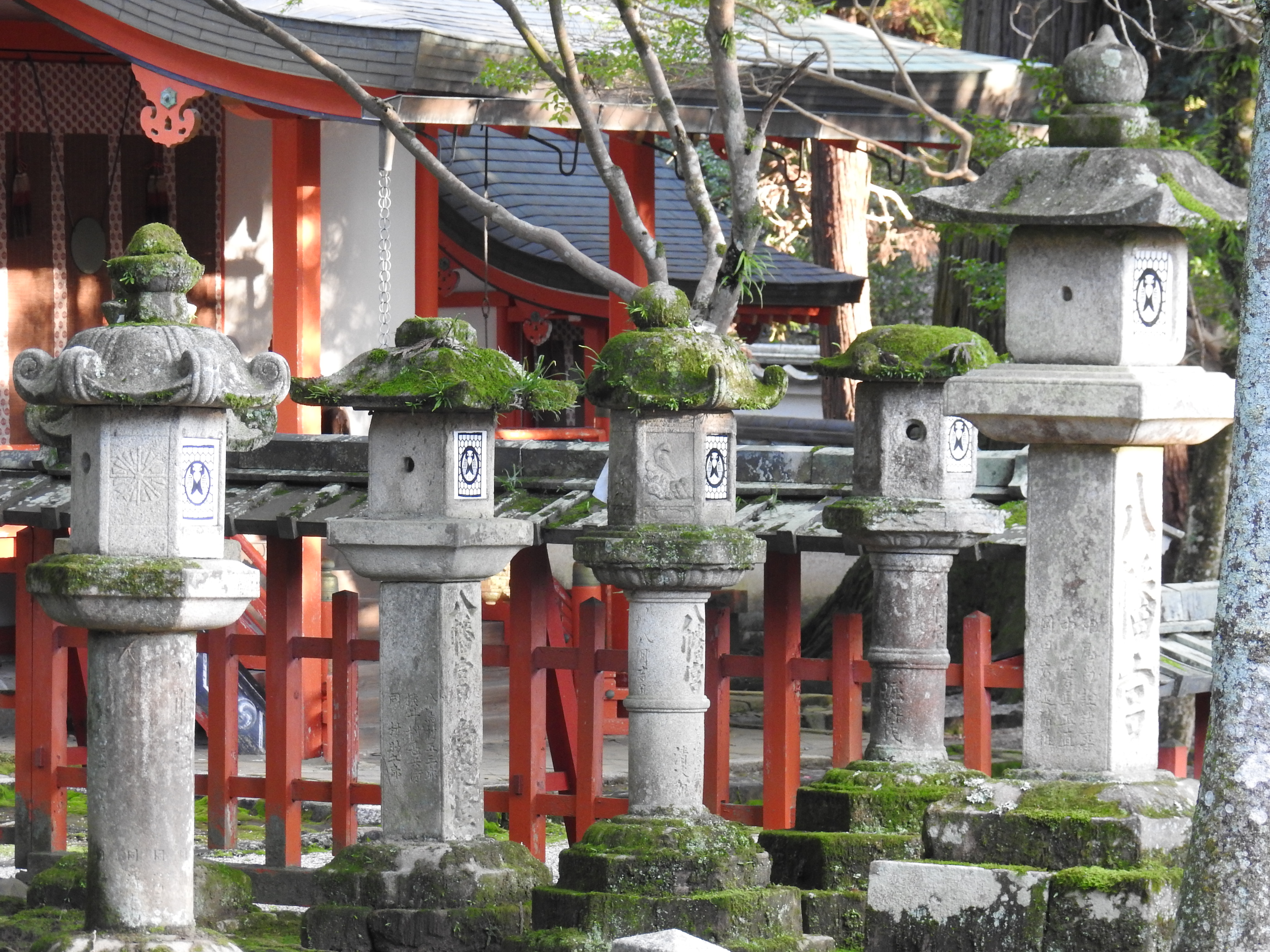 The fact that the trees were also turning autumn colors, the deer were bowing and the weather was crisp only made the visit better. 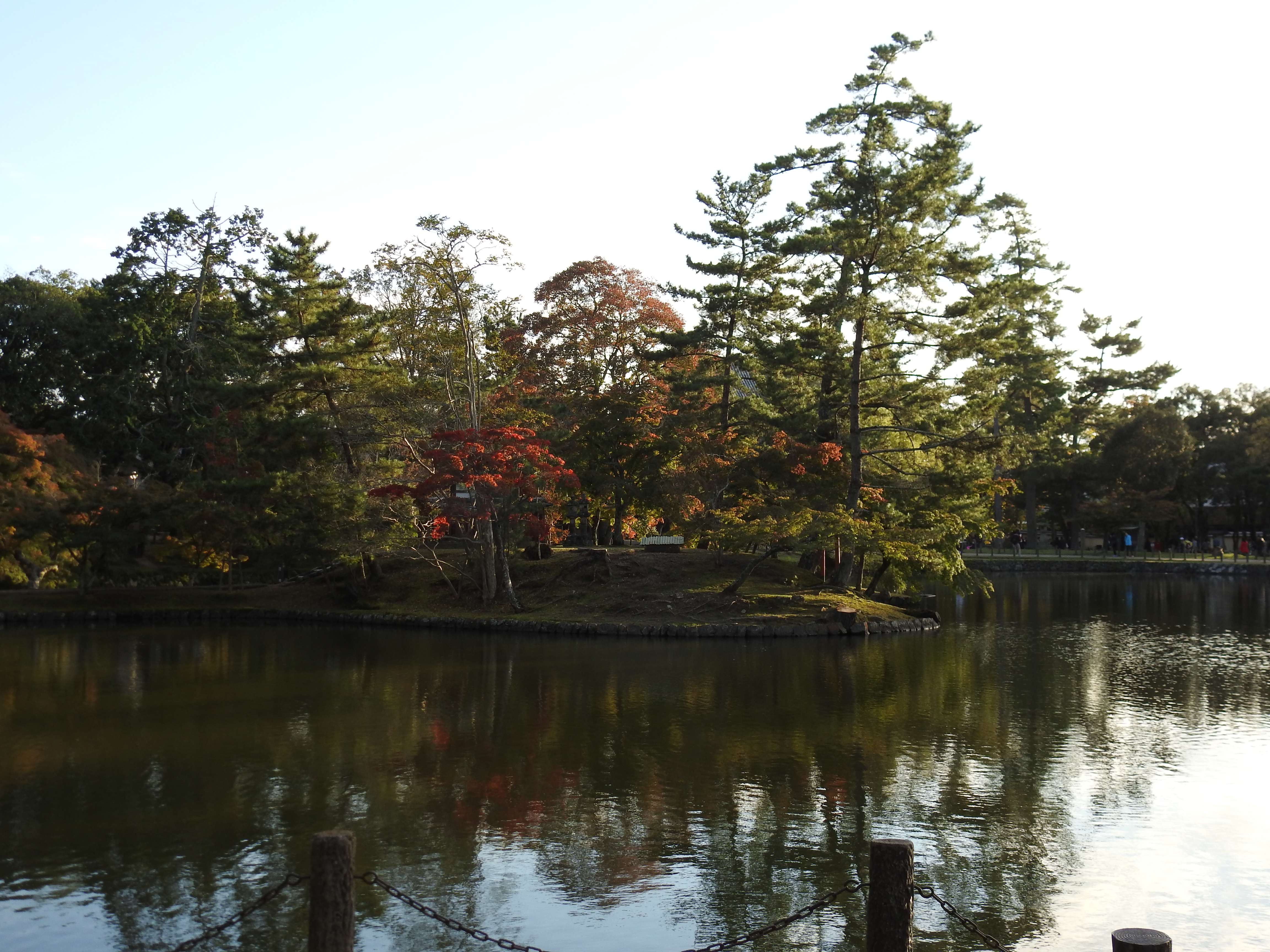 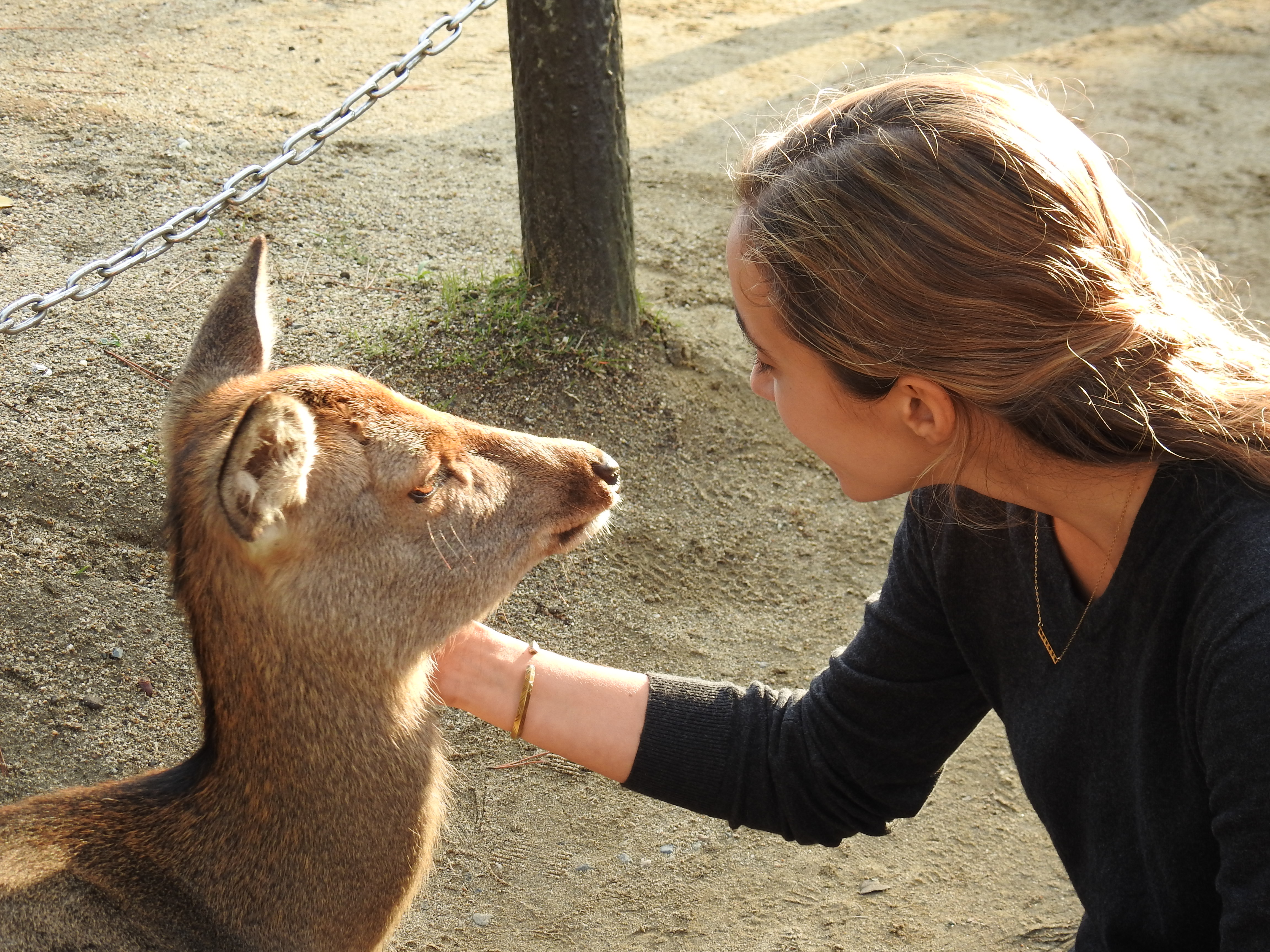 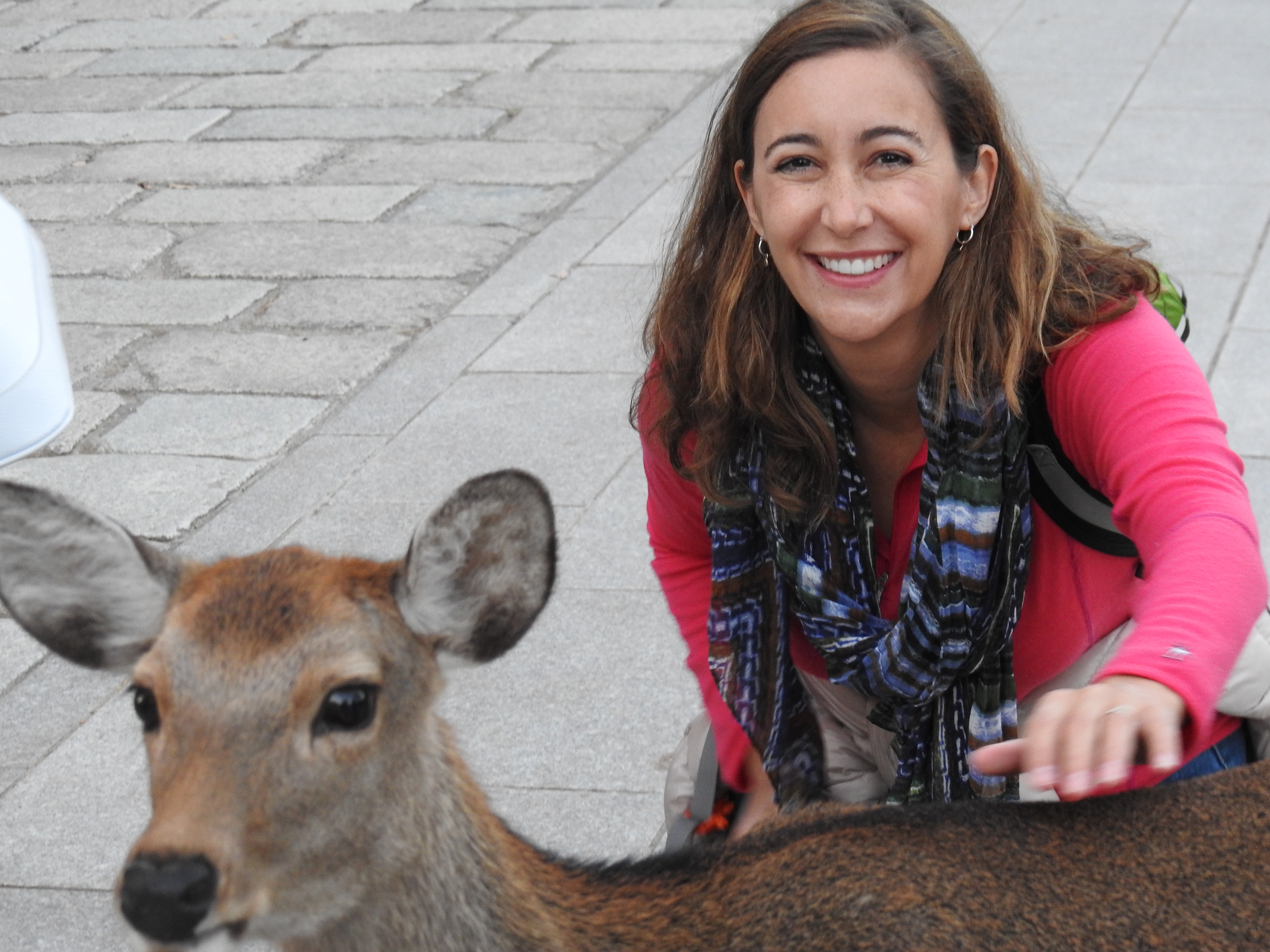 After a meal of sushi, Susie and I retired with the girls while Liam and Wiley decided to try their hand at Pachinko.

Pachinko is a gambling game that seems to be the unholy love-child of pinball and slot machines. You pay for a certain number of steel balls that you then send through pegs and attempt to get them into the right slots at the bottom of the board. You have some dial that enables you to vary the speed of the balls so that they will follow certain paths through the pegs. Apparently, the “right” speed varies depending on what the animated screen in the middle is telling you.

Of course, this animated screen is telling you everything in Japanese.

Wiley and Liam are not gamblers in any way, shape of form, but they do like to embrace odd cultural experiences. If they can have an interesting experience without the parents running the show, all the better.

They came back less than an hour later. Having resolved to play the “penny” version rather than the higher stakes games, they found that they could run through $5 in less than 5 minutes. Wiley was aghast. As he told me the story, he ran his fingers through his ridiculously long hair and shook his head, “It was unreal. The noise, the balls, the animated woman yelling at me in Japanese. I barely had an idea of how quickly the cash was disappearing.

“There was life before pachinko and now there is life after pachinko.”

One of the employees saw how pathetically they had fared on their first $5 and gave them advice on their second $5 (they had set themselves a $10 limit). With his help, their next effort won them $9, so they ended up down only $1. But they had seen the dark hole that is the world of pachinko and had decided that returning to the hostel sounded a lot more appealing. 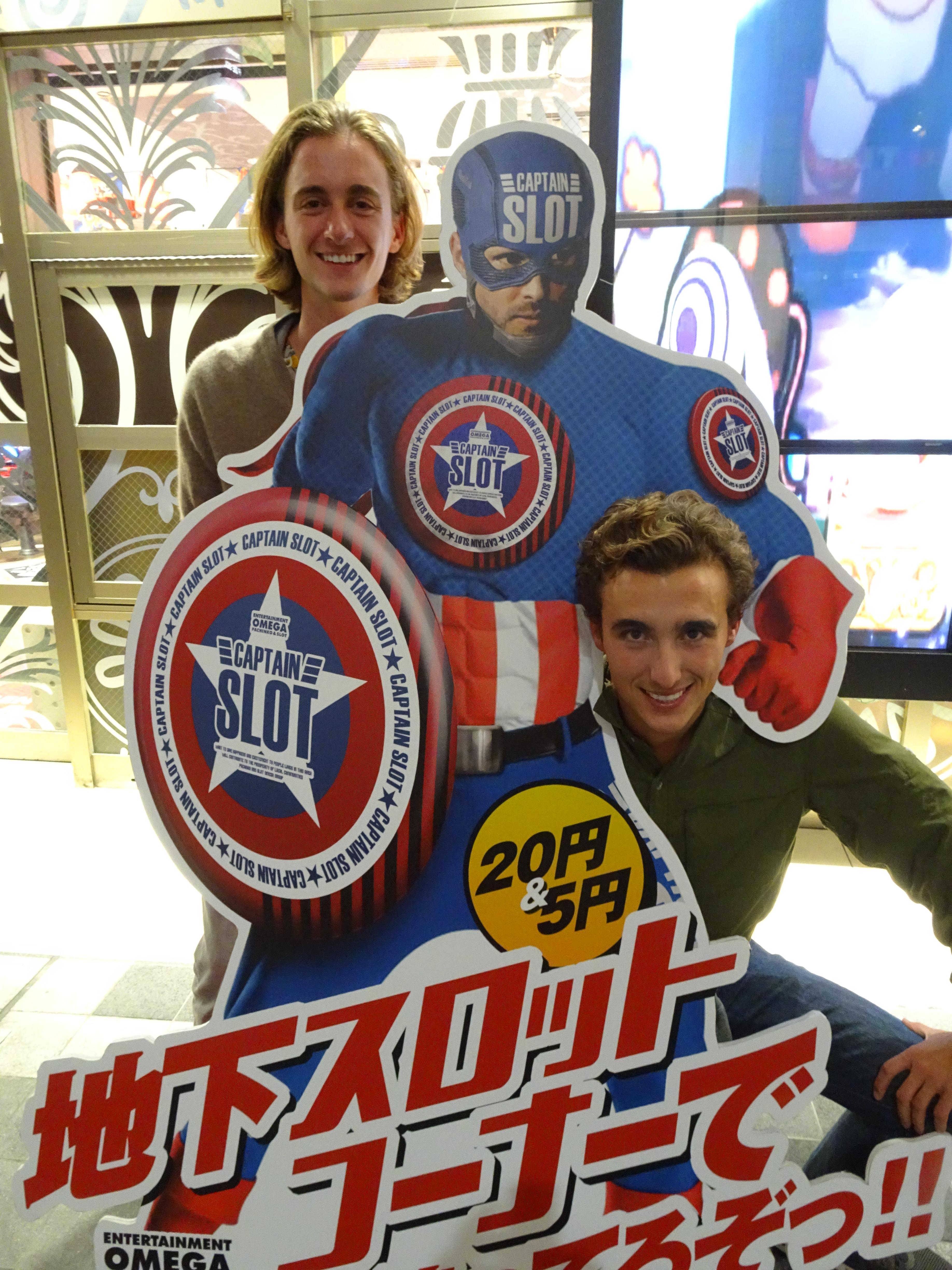 Here are the boys with a wonderful example of trademark infringement.  I saw this out of the corner of my eye and instantly recgonized Captain America.  I then looked at the face and thought, “Captain America doesn’y have a beard.”  It was only then that I realized that this character was actually Captain Slot - a “cease and desist order” waiting to happen.  Since the good Captain is an advertisement for a pachinko parlor, I felt he deserved inclusion with Liam and Wiley.