This is a bonus blog that includes two short stories I hope you will enjoy, one culinary and one decorative.

By the way, the picture above has nothing to do with the blog.  But if you were wondering where to tie-up your mystical horse, this is a good place to start.

A Restaurant from the Twilight Zone

On our first night in Pindaya, we went looking for a restaurant a little later than usual, around 7:30.

In the other cities we have visited, we would have encountered dozens of small restaurants during a 5 minute stroll.   But Pindaya is not on tourist time, it is on Old Myanmar time. They had practically rolled the streets up. 90-95% of storefronts (including the ubiquitous mini-convenience shacks) were closed. As we started to lose hope and wonder if we could make a meal of bananas and potato chips, we came upon a small establishment with an electric sign that said “restaurant” in both English and Myanmarese.

6 men were seated at two tables and called out to a woman who was in the back. She came out and greeted us warmly. She had a truly kind and pleasant face. She handed us a menu (in English) and a pad to write down our order. After all, she wanted to get it right.

Liam had decided to stay home and Virginia was not really hungry, so we would order only 4 items:

We were really hungry, so we were delighted we had found a place where language would not be a problem. To make it even better, she arrived almost immediately with two plates of potato chips with a sweet chili sauce.

“Present. Present for you.”

We munched and awaited our meal.

She then brought three additional small plates: one with tiny dried fish that were spicy, another with small, pickled onions and one with a mystery paste.

Whoa, we are convinced that she must have confused us with VIP’s. OK, each of the items were not exactly haute cuisine, but the gesture was lovely. But we wanted to save room for our orders.

Then came a plate of raw veggies: cut carrots, cilantro and some potato-like item.

Then she brought a tiny bowl with three pieces of stewed chicken bones (about 60% bone, 40% edible bits) and a plate of stirred fried vegetables. I began to entertain the idea that the stewed chicken was my fried chicken.   I was trying to decipher why she brought the veggies when she arrived a final time with two big bowls of steamed white rice.

Did you notice that I said “final time”? Yessir. Our meal of fried rice, fried vermicelli and fried chicken (that we had written for her in detail) had become potato chips, fish jerky, the paste, a few chicken bones and a midsized plate of veggies.

We are convinced that she went to the back and suddenly realized that she could not read English, but did not want to reveal this fact to us. Her answer was simply to throw a dart at the menu a few times and bring out whatever items she hit.

On the bright side, the meal cost $6.

Like many hotels and hostels we have seen, our place in Pindaya has a lobby featuring art showing local people or customs.

In this particular lobby, they had 4 pictures. Please allow me to take you on a tour of the Global Grace Hotel lobby. I will go around the room in a counter-clockwise order.

Here, we see a traditional Myanmar warrior in the garb typical of 100 years ago. 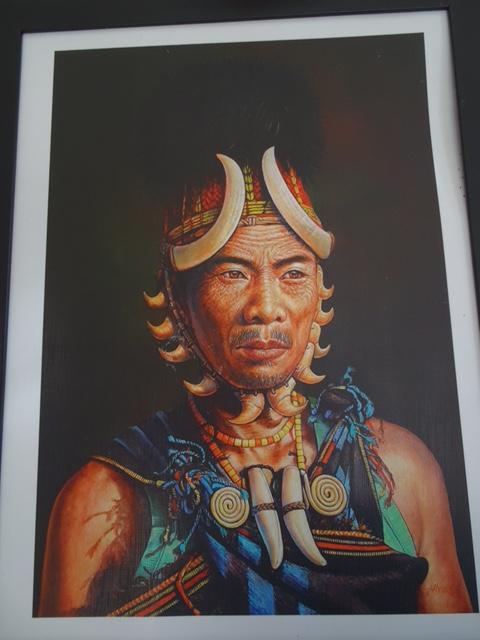 This painting features the lake at Pindaya’s center, the heart of the town. The people bathe in it, wash clothes in it and meet for conversation at its edge. In this painting, we have a group of young women who are inexplicably compelled to bathe in snappy pantsuits. 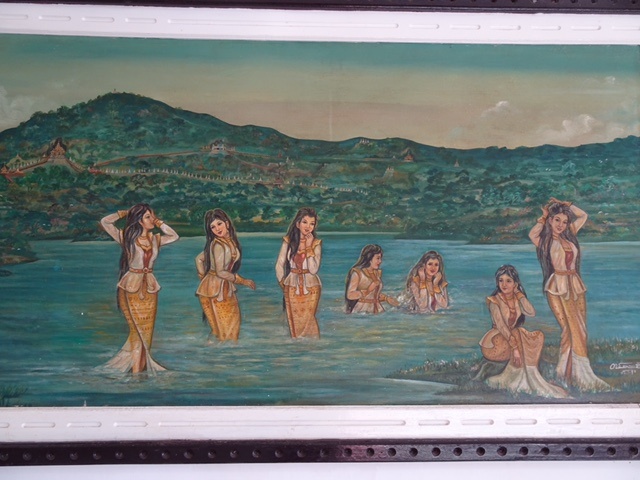 Not a typical sight, but I can allow some artistic license. Perhaps the artist loved painting fashionable clothes but had a terrible fear of feet, so s/he created this arrangement.

Our next offering features a woman whose face suggests a long life of challenge. It is a wise face. This painting, like the warrior, seemed to make perfect sense. 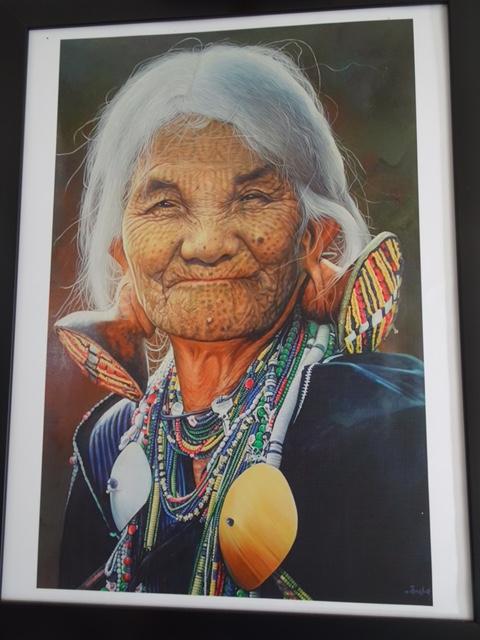 OK, that brings us to the final picture. When I first saw it, my mind said “simple scene of an elderly couple”. But then I looked more closely. 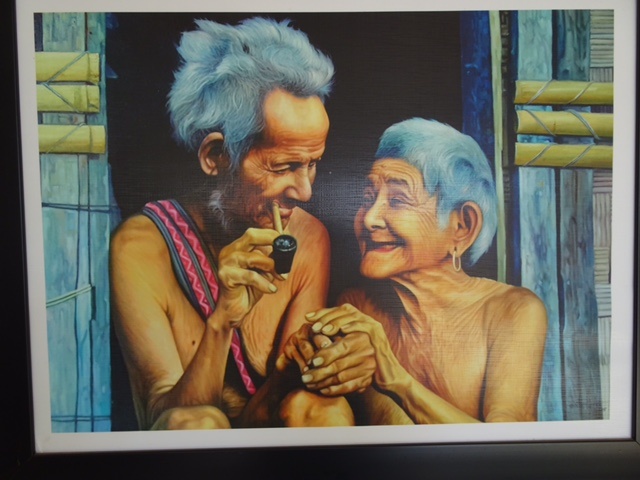 What in the world is happening in this picture?

What are they smoking to create those expressions?

Why is their hair blue?

And, perhaps most importantly, is either of them wearing any clothes at all?

Why was the painting made? Was it part of an ad campaign for a Myanmar Hippie Retirement Community?

We can add these questions to the list of items I will never understand about this country.