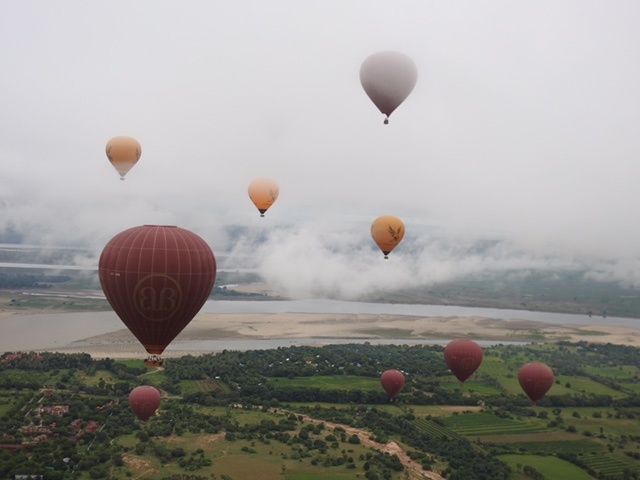 When we traveled in Tanzania, we took a magical balloon ride over the Serengeti. During this ride, we lowered to within 50 feet of hippos and lions. We would then soar 1000 feet up to see the vast expanse of the plains and the distant mountains.

One of the reasons we chose Myanmar was seeing pictures of the temples with balloons lofting overhead. The effect was surreal.

We decided to come here and to take another balloon trip.

While in South Africa, we met a woman who had come to Myanmar (she insisted on calling it Burma). We peppered her with questions, including one about the balloon rides. She explained that the pictures we had seen were older because the balloon companies are no longer allowed to fly directly over the temples. Apparently, the government decided that the balloons were either too distracting or too disrespectful to the temples. She did not know why, but she was sure that the government had created some regulations.

Curious, we decided to contact a few of the balloon companies and the booking agents. Their responses were tellingly oblique. One reported that “our routes changed slightly”.

My personal favorite was “we still fly over temples”. I like this one for its deceptive honesty. Once you are here, you realize that you cannot throw a baseball in any direction in Bagan without it going over at least one of the 2200 temples. What the email was less direct about is the fact that we would not fly over any of the famous or large temples. 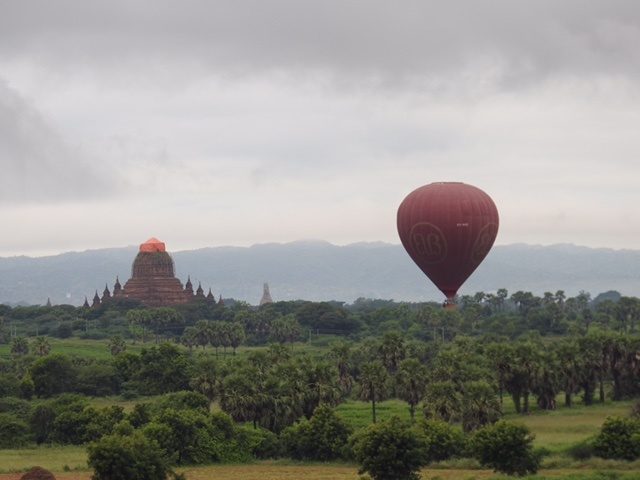 [Note: As a camp director, I have a personal rule that I never lie to campers or counselors. But that does not mean I do not have a little fun every now and then. A few years ago, a rumor started that the Obama girls would be attending Camp Champions. While curious, no one wanted to ask me or Susie directly because that know that we deeply strive to assure that every camper has the same experience at camp and that we are all equal. EVERY camper is a celebrity at our camp, so we would not want to focus extra attention on any one camper. I, however, learned of the rumor and decided to have some fun. At a counselor meeting, I ended the meeting with a simple reminder. “Hey guys, I want to remind everyone here that every camper at Camp Champions is special. All deserve our love and all deserve equal attention. No one camper is more special – or famous - than any other.” This is the type of statement we make all the time during orientation, but generally not at our Wednesday night meetings.”

The rumor-lovers interpreted that as confirmation that someone profoundly famous was indeed coming to camp soon.   Within two days, I got an email from my sister in Midland. It was short and asked two questions. “Are the Obama girls coming to camp? Is it a rumor?”

I wrote back an even shorter email, “Yes”. After all, it was a rumor. She did not find that quite as funny as I did.]

Back to the balloon. We were able to read between the lines and know that the dream flight was no longer offered. But several reviews on Trip Advisor and other sites said that it remained a uniquely effective way to see the expanse of the temples. So we decided to go with Balloons over Bagan for a sunrise trip.

They had canceled the flights for the three previous days due to rain or very low cloud-cover. Typically, the rainy season has ended by November, so this was the first time in memory that they had 3 consecutive cancellations in November. They would also cancel today’s ride (we rode yesterday).   We would be the only day out of 5 with balloons in the air.

And even that almost did not happen.

We were picked up at 5AM from our hostel and taken to a site a few miles out of town.

As soon as we got there, we saw a massive difference from our African ride. In Africa, we had all the space in the world to lay out and fill only 3 balloons. Here, they were preparing to launch 21 in a space the size of three football fields. As a result, the balloons press against each other when full and then need to actively make sure not to hit each other. Another difference made yesterday’s launch somewhat harrowing. Africa had a strong breeze. We had virtually no wind at all.

In fact, the lack of wind and possibility for rain made the decision to launch a last-minute one. We saw all the pilots and crew leaders meeting in a huddle, watching small trial balloons lift up and not move much. After about 10 minutes of talking, they broke their huddle like a high school football team – cheering loudly. They then dashed madly to the balloons and started the filling process. 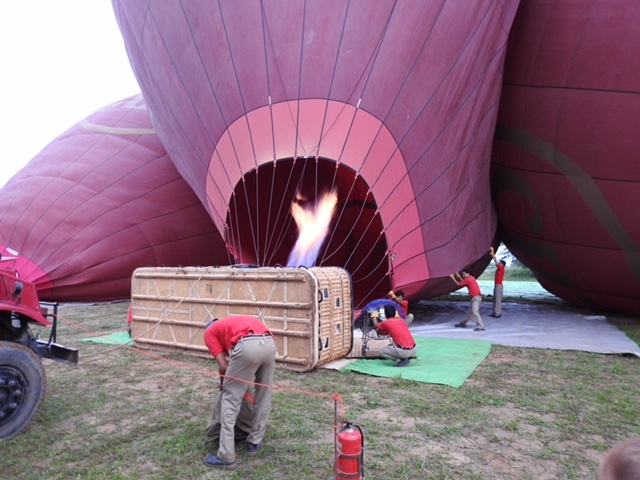 Prior to making the air hot, the balloon needs to be filled, so a crew opens the bottom and uses a massive fan to blow air into the balloon until it is roughly full. They then heat the air, and stand the basket upright, load us into it and prepare for launch.

Our pilot, Mike, took us up first. I divined that he was the head pilot as he went up first and provided instructions to the other pilots (order of ascension, maximum elevation, etc). Mike has been flying his whole life and doing so professionally for 20 years. He also had a lovely English accent, having come from Bristol. As we know, Susie is a reluctant flyer, an attribute that extends to balloons as well. But she is a massive anglophile, so the combination of experience and an authoritative British accent was so soothing that both Wiley and I commented on the visible reduction of tension.

The flight was not particularly noteworthy. The light winds provided a longer flight, but we did not cover as much ground as I would have liked. Whereas the flame thrower that heats the air was a welcome relief on our 50 degree morning in Africa, it was less so at 80 degrees and high humidity.

It was also overcast, so we did not get the benefit of the morning light catching the temples.

But the operation itself was worth the price of admission. I loved seeing all the balloons go from flat to full in less than 10 minutes. Seeing so many launch at once was beautiful, if not slightly harrowing. It is worth noting that balloonists are blind to what is above them, so lower balloons have the right-of-way. The burden of safety is on the higher balloons. In ideal conditions, a nice breeze pushes the balloons away from the launch site and creates a “balloon river”. We had no such river. We did not even have a creek. We had 16 balloons all going up at roughly the same time and staying in the same area. 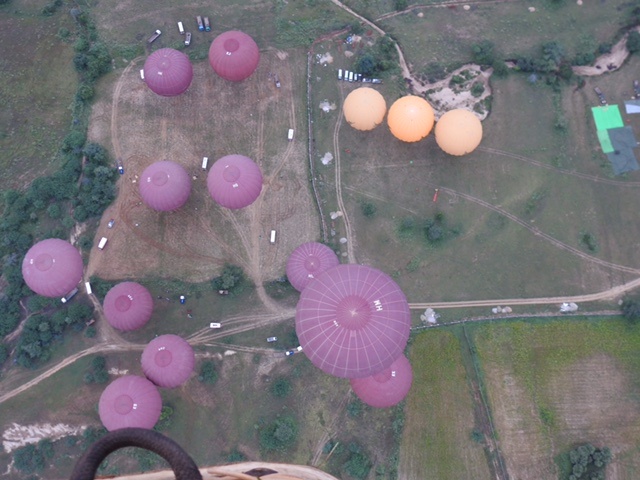 Mike went up and down trying to find some level with a working breeze. Everyone managed to survive, but we definitely had some heated yelling on the walkie-talkies.

The landing was my favorite part. In most places that have lots of ballooning, there are easily-accessible landing zones. In the Serengeti, almost any spot can work. The only challenge is to pick a spot as close to a road as you can so that your crew can help you land and then break down the gear. I imagine that Albuquerque (the site of the largest balloon festival in the US) is similar.

As it became clear that we were descending, I look down at a patchwork of fields, banana trees and the occasional electric line. I also saw cows and farmers. I could not spot any clear road nor the Balloons over Bagan busses and trucks.

We did see a group of people on motorcycles that seemed to be following us. They were crossing the fields and getting stuck in the mud. They were not farmers nor did they wear any of the red shirts of the balloon company.

They were the souvenir vendors. Once again, the industry and energy of the souvenir paparazzi impressed us all.

As we were lowering, Susie asked Mike where the landing zone is.

“We just try to find a spot without any crops. If we land in a field, we pay the farmers for the lost crop. They are actually quite happy for us to do that.”

He spotted an empty plot where another pilot had just landed and decided to lower down next to him. As we came in, we could hear and feel the leaves of the banana tree scraping the bottom of our basket. Once we landed, we soon realized that the field was not quite long enough for the other balloon to deflate without hitting us.

Here is a time-lapse video.  I love seeing the first balloon scooting over.

So Mike said, “Prepare to launch again”, took us up in the air, scraped more trees and plunked up down in the next clearing. Within minutes, not only did we have a wide array of souvenir options, but the red-shirted Balloons over Bagan crew had arrived to set up a champagne breakfast and help with the breakdown.

Since some of the vegetation in our clearing was spiky, they addressed that first. They put tarps over the big plants and chopped down the smaller ones. They then guided the balloon onto the desired area while Mike opened the top to release the air.

Here is another time lapse showing the deflation process as we took back off to allow for it.

The best NASCAR pit crew has nothing on these guys. 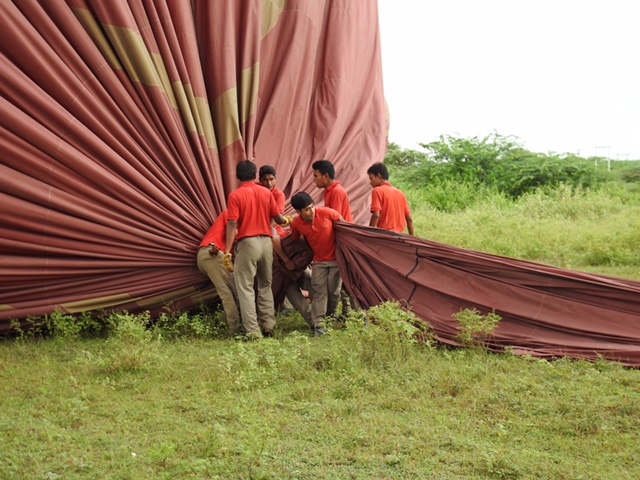 I will conclude with a small mystery. There were three balloon companies launching that day, ours, Golden Eagle and Oriental Ballooning. All 12 of ours flew. All three of the yellow Golden Eagle balloons joined us. But only one of the six green Oriental Ballooning units flew. While we were slowly rising, we watched as they removed the launching tarps on all but one of their sites. I could not help but wonder what the people who had booked the flight were saying or thinking. Did they think it was too dangerous or too likely to rain? If so, why did any go up? How did they decide what 1/6th of their customers would go? Draw lots? Karaoke contest? Sadly, this is a mystery that I was unable to find an answer to. Mike seemed happy that his competition had less success than he, but could not provide a viable answer.

In short, the mysteries of Myanmar continue to add up.