An Instant Classic in Bagan 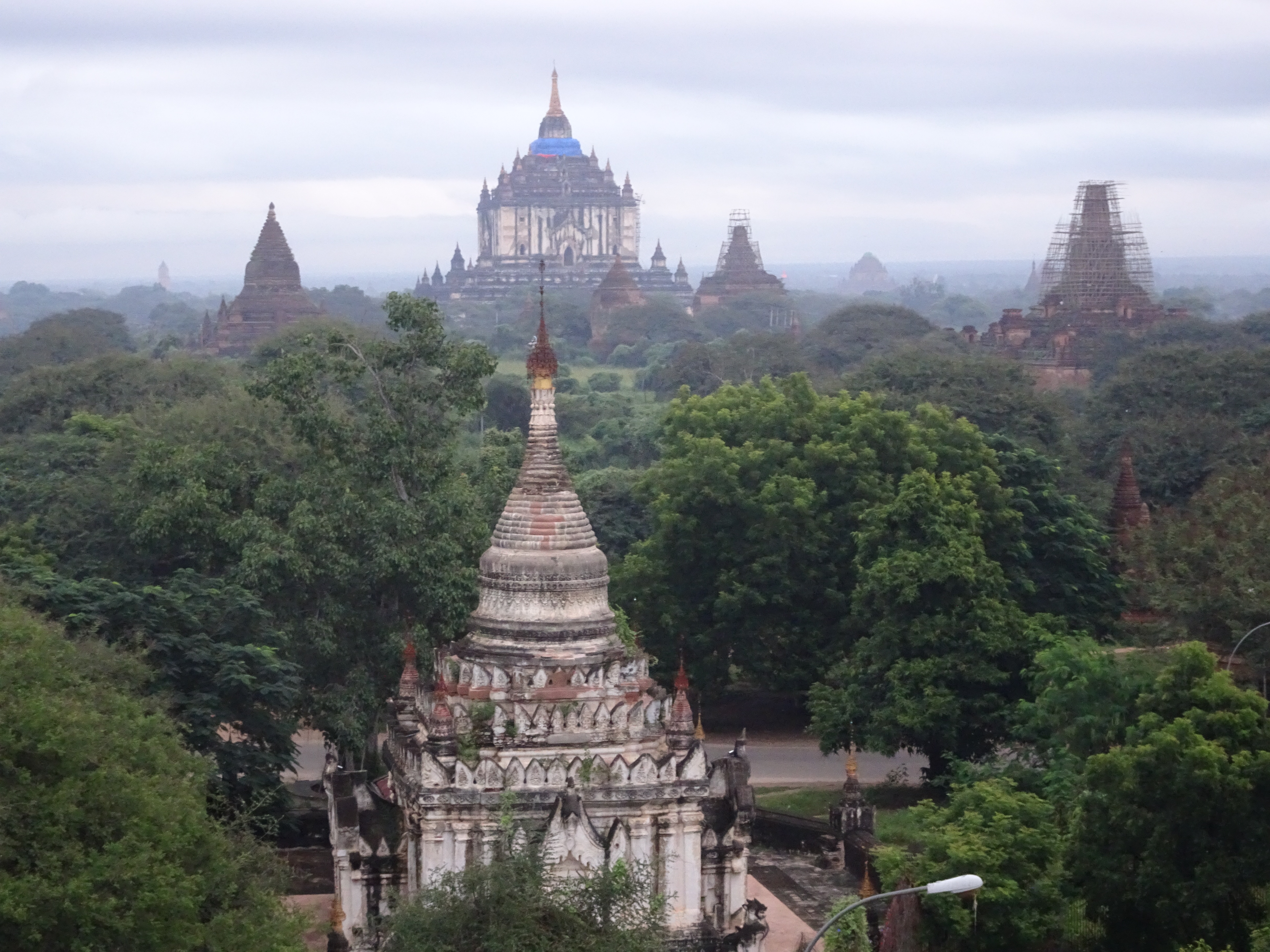 Let me start by saying that I have buried the lead in this article. The best part is at the end. So read on and enjoy!

I think we might have adjusted to the odd Japan/Myanmar habit of ending the day early and starting the next one early as well, but I must admit it is odd being totally spent by 8PM. To be clear, I am not simply talking about Susie and me – the kids are gassed 2 hours after sunset as well.

We are all particularly confused and amused at the fact that we would only just starting Torchlight if we were at camp.

Part of the exhaustion comes from the active days. Another contributing factor is the lack of decent lighting (in Myanmar, not Japan). Streets are dark with few streetlights. The limited illumination comes from storefronts. It creates the illusion that you are walking around way past midnight. Finally, it is just hard to have the sun go down around 5 or 5:30.

But our penchant for early bedtimes should not be confused with long nights of sleep. We are not sleeping in, much to the chagrin of our four teens. We woke at 4:45AM, 5:00AM and 5:00AM over a three-day stretch. These ultra-early awakenings did not lead to family disharmony, but the strain was subtle. No one exploded or yelled. Instead, each of us lost a few patience points each time we woke early. I like to think of attitude and disposition as being like brake pads. When you are rested, the pads are new and thick. But if you are sick or sleep-deprived or stressed, the brake pads wear thin.

One early morning wake-up does not ruin the brake pads, but three can make them whisper thin. Such was our third day.

I should start by explaining what we are doing in Bagan.

Bagan is the site of a massive building campaign between the 11th and 13th centuries. The Kingdom of Pagan had unified the area 2 centuries earlier and they wanted to create a sacred place that would show their power and influence.

If you are a modern-day Westerner, you would buy a luxury car or build a large home to show your success. This kingdom built over 10,000 temples, shrines, stupas and pagodas. Yes, you read that right.

Over 2,200 continue to stand today. Or, should I say, are attempting to stand. Many are struggling from neglect. Many more were hit hard by the earthquake 11 weeks ago (August 24) and the damage is evident everywhere.

But even with the damage, the plains of Bagan are a remarkable site to behold.

It is made even more fun using the mode of transportation that we have here – “e-bikes”. With a top speed of around 30 MPH, we can move at our own pace and in our own direction. We have taken them at 5:30 in the morning to see a sunrise (or, more specifically, see the hint of a sunrise through thick cloud cover) and to return late at night. We have ridden on paved roads and on dirt paths no wider than needed for a single person.

Susie and I realize that this is a rare way to experience beautiful archeology. Myanmar is only recently opened itself to outside tourism, so they are having obvious growing pains. They have not yet figured out the most efficient ways to charge tourists or move large numbers of them. Soon, the dirt roads will all be paved and the e-bikes will give way to busses and private vans. Temples will have separate entry fees or they will have a general pass for the minor ones and separate charges for the big ones. You will need to make reservations to climb the tallest temples at sunrise and sunset. 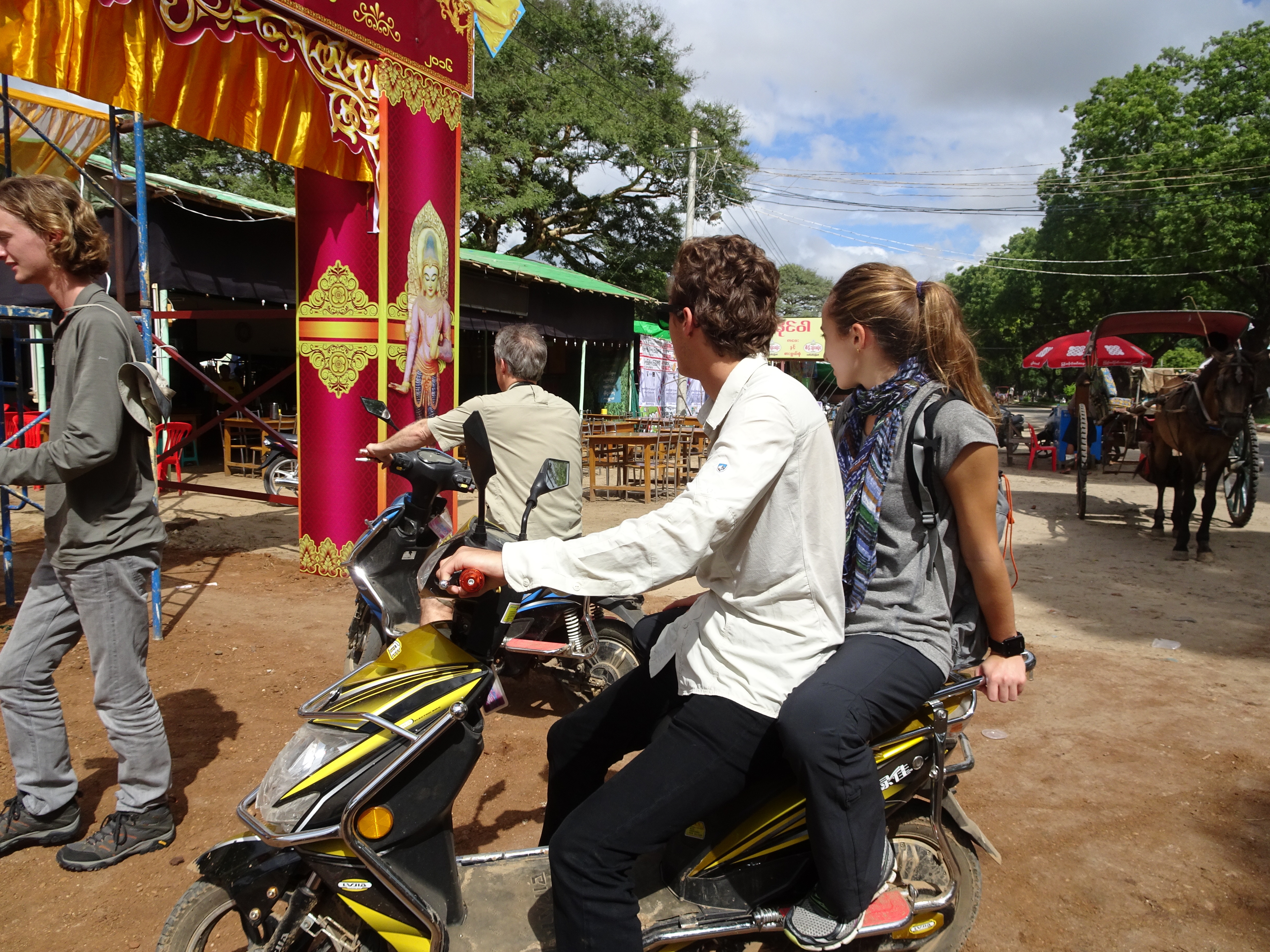 But not now. You get on your e-bike and explore like a 10-year old.

This type of travel is perfect for us. Because of the novelty of this experience, it took us longer than usual to see the thinning of our dispositional brake pads. Yesterday, however, we started to unravel. I will not bore you with the details, but I can tell you that each of our four teens felt they were doing 75% of the work and the other 3 were not pulling their weight.

Shockingly, everyone managed to have enough self awareness that they were running on fumes and did an internal reset when they felt a massive injustice was happening.

So we went to bed early (everyone out by 9) and slept in today.

This sleep-in morning seems to have lifted spirits.

We, however, have two odd tales about our hostel that we need to (reluctantly) share. Susie and I are in a room with three single beds. We are each in one and our stuff is on the third. Similarly, the kids are in a room with 5 beds with one serving as a luggage holder.

At 8PM last night, just as the kids were getting ready to go to bed, a 25-ish year old Dutchman walked into the room and said, “I hear you have an extra bed”. As a reminder, our kids are all older now. The boys will be 20 in less than 2 months. They are also very protective of their sisters, not that they need protection. Terrill and Virginia are forces to be reckoned with.

The kids looked at him blankly. “No, I think this room is full.”

“OK, I will check again with the desk.”

And he was gone.

That, my friends, is a hostel experience.

But not a hostile one. We would be the source of that. Please note that the perpetrator of this faux pas has asked to have his/her name be redacted from the record, so I will describe the incident anonymously.

Susie and I went to the free breakfast at 7AM. Over the next 10-15 minutes, three of the other four children went down individually to join us. The Breakfast Room is confusingly situated with even more confusing signage.

Here is what we see. 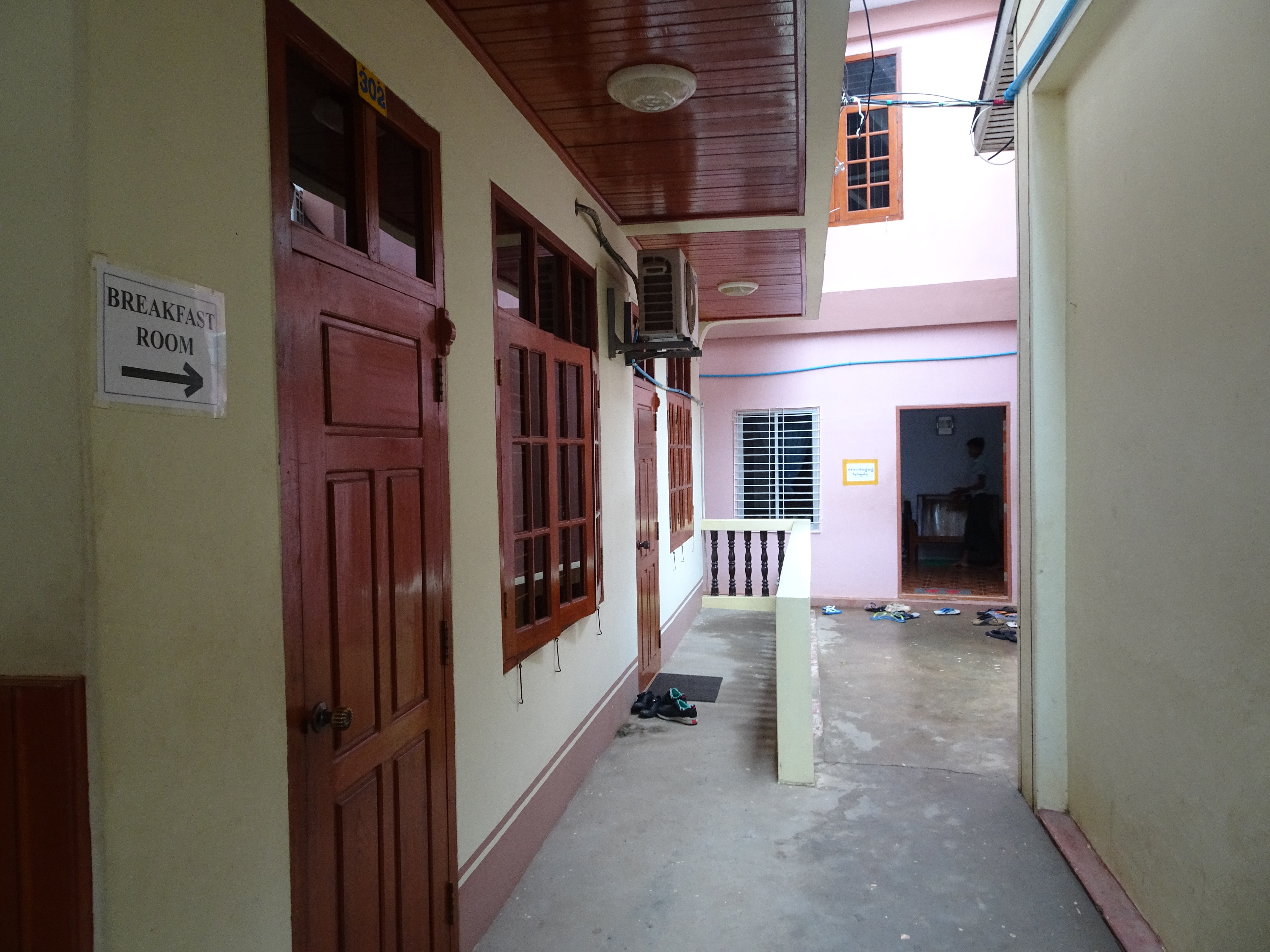 Susie and I correctly walked to the right and down the corridor to this open door. We then went to a room to the right. But as our children started to arrive, they could see us in the room behind this door, so they attempted to open it despite the fact that there is a table and chair in the way.

Ah, but the poor signage had even more to offer. When the fourth of our progeny descended the stairs, s/he saw this sign with a clear arrow.

Our hungry traveller opened the door directly next to the arrow saying “Breakfast room”. 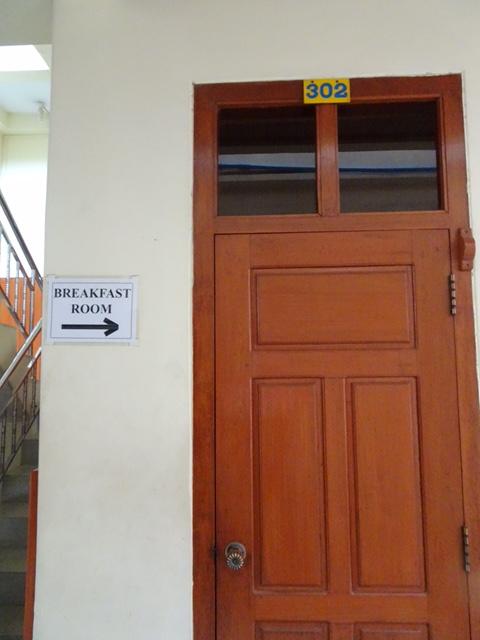 Wrong room at the wrong time.

Breakfast was not on the menu. Inside was a couple. An affectionate couple having a private moment. Our now humiliated Baskin child had arrived while they were “en flagrante”.

S/he retreated and went back upstairs. Oddly enough, her/his appetite was no longer quite the same, replaced with embarrassment. I suspect the same might be true about the couple as well.

P.S. [Note: Virginia managed to negotiate the revelation of our hero. Here is her addition:] It be WILEY!