A Haiku for a Hostel 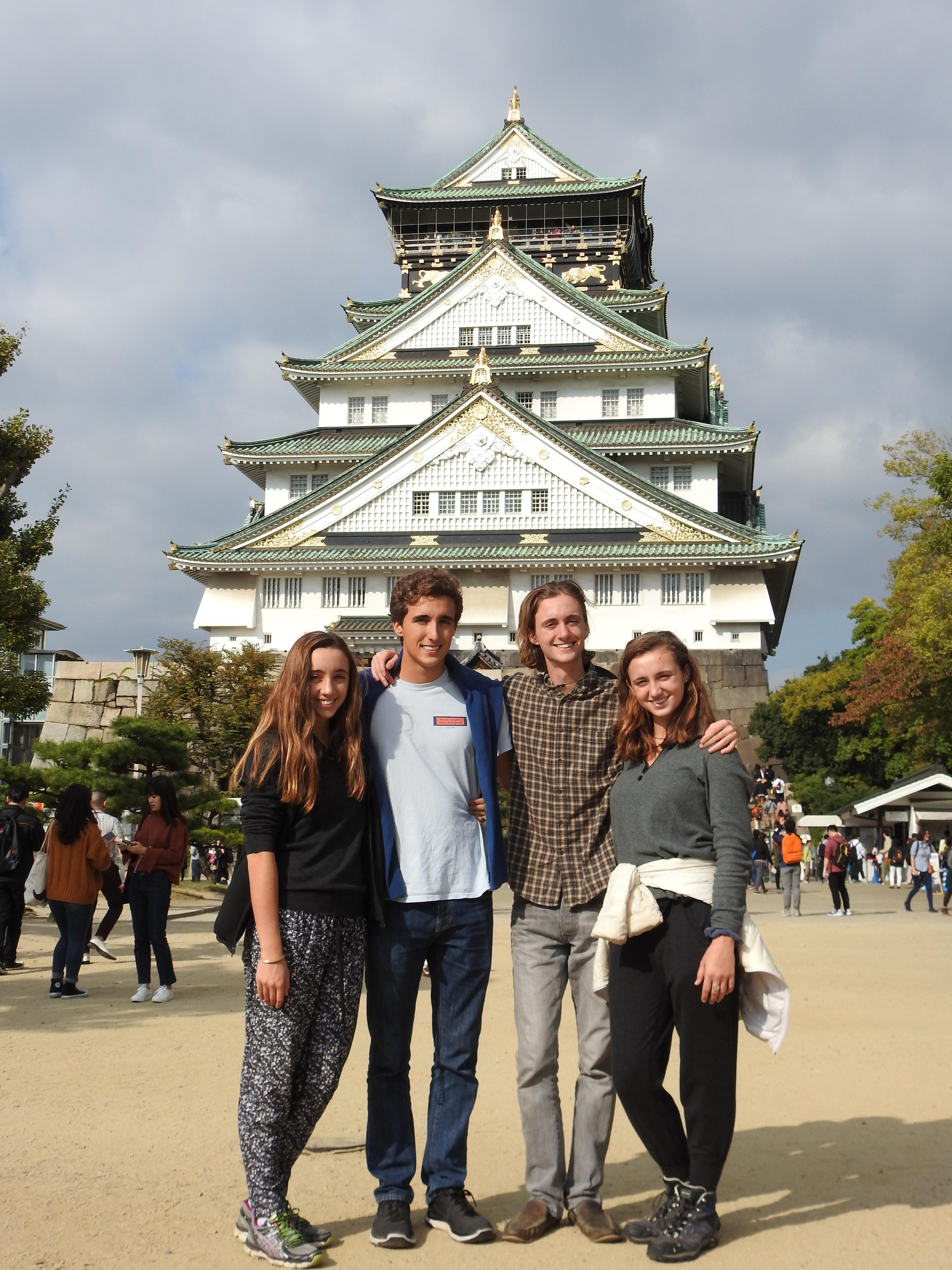 Osaka must have looked really modern in the 1970’s. OK, perhaps the entire city does not look like Pittsburg 40 years ago, but the area we stayed in was not prime real estate by any stretch of the imagination.

Our hostel was no better. It featured paper-thin walls and a single bathroom one floor down that served 4 rooms (each sleeping two). Susie’s bed had a spider hiding in the heater that cleverly ducked in each time she tried to kill it. She switched her position so that our third roommate lived above her head instead of her feet. As a rule, I do not mind the subpar rooms in hostels, because they drive all the guests out of their rooms and into a common room where they can visit and share stories.

This is great when your common room looks like this. 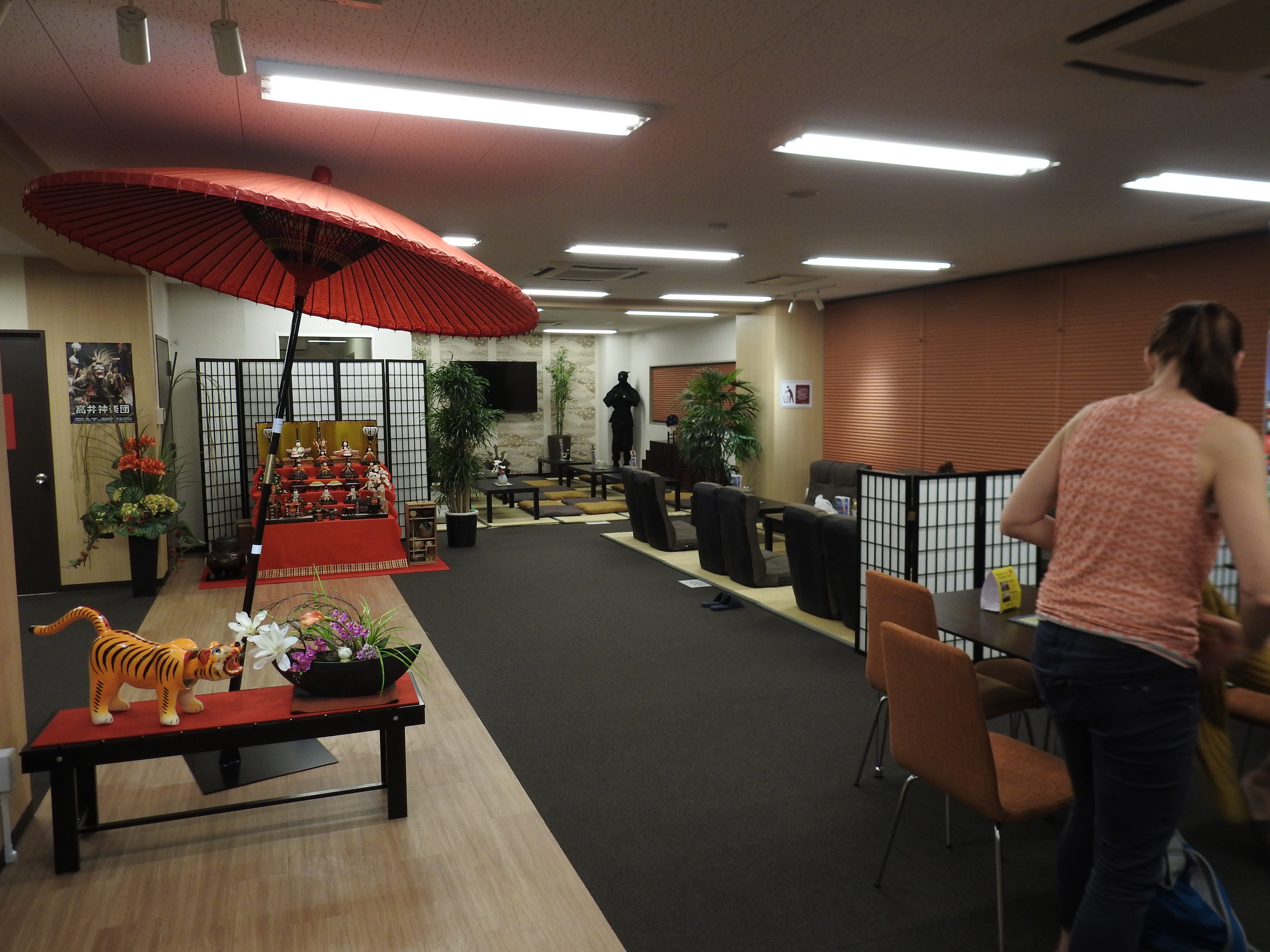 But when it looks like this one AND you have to walk a flight of stairs to the bathroom, you know you are scraping the bottom of the barrel. 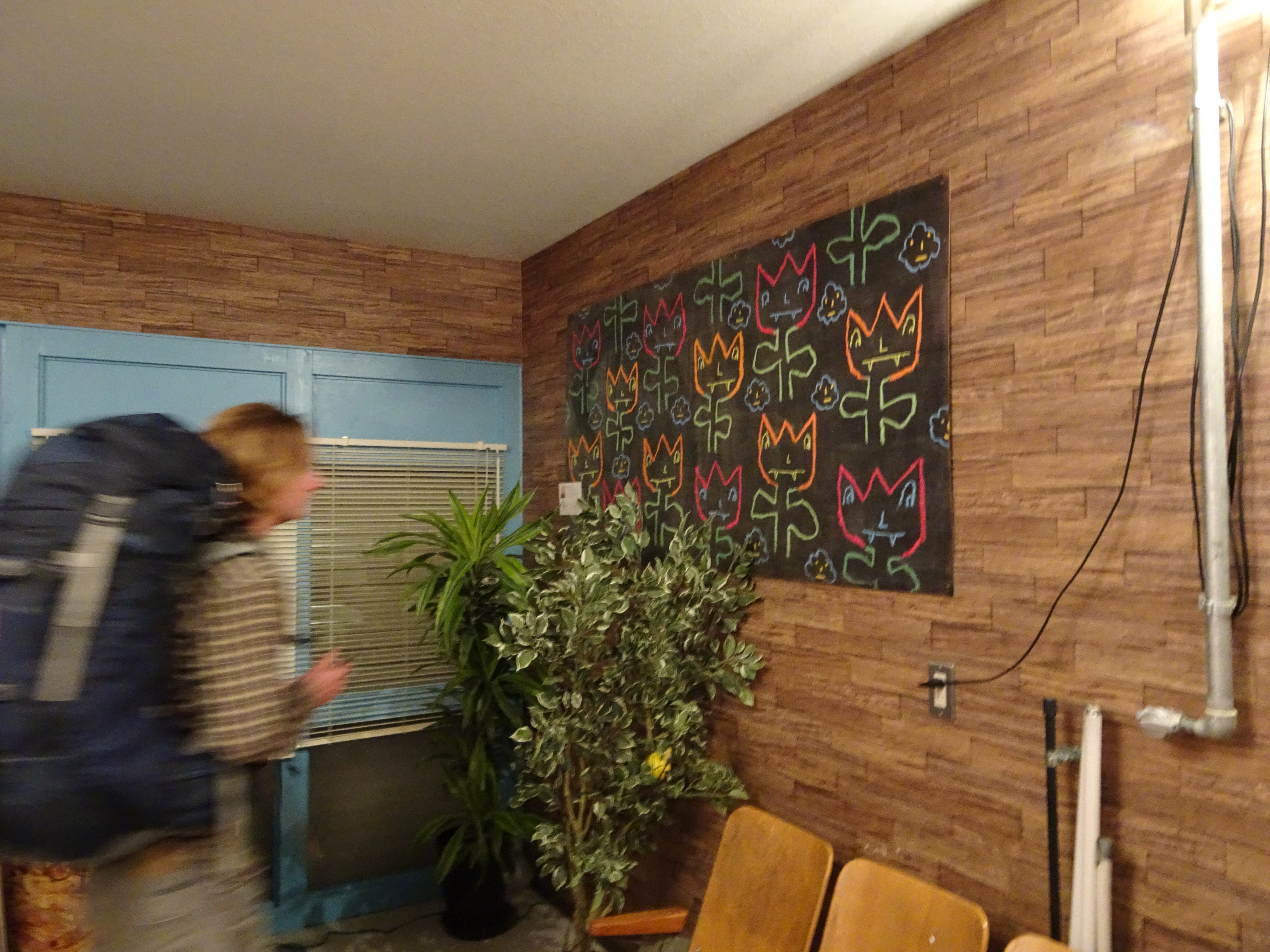 On the bright side, we had zero incentive to stay in our rooms and took the opportunity to dive into Osaka.

Our strategy was simple. Visit the Osaka castle and take a train to the city center where we would see a buzzing hive of shopping, food, lights and people-watching. While our plan did not specifically include getting on the wrong train not once, but twice, we enjoyed that aspect of our adventure as well.

[Note: I feel a need to comment so that you will not think that we are truly incompetent travellers. We have found the signage for trains, subways, busses and streetcars to be staggeringly inconsistent. Sometimes there are maps in the cars, but not always. When there are maps, most of them have the stops named in both English and Japanese, but not all. Our mistakes have all stemmed from finding the right track, but boarding a train that takes an unexpected route (e.g., veering west when all maps seem to suggest it would take the northerly route). Add to all of this that we have a pass to travel for free on any JR (Japan Railways) train or subway, but not on other tracks and you have a recipe for some high-quality confusion.]

Despite our detours (I like to think of them as “adventure enhancers”), we enjoyed Osaka. The castle was unusual. It looks more European than Japanese to my eye. Of course, this was not the original castle. It burned down. Twice. In fact, few structures in Japan are original. After all, virtually everything is made of wood because wood is abundant and more earthquake resistant. Bricks and most masonry get reduced to dust when the earthquakes come. But wood buildings often catch fire, especially when there are angry monks or violent warlords around.

The museum within the castle told the story of the shoguns (essentially warlords) who had ruled and fought there. We learned about many betrayals, suicides, and battles. We saw cool shogun armor. 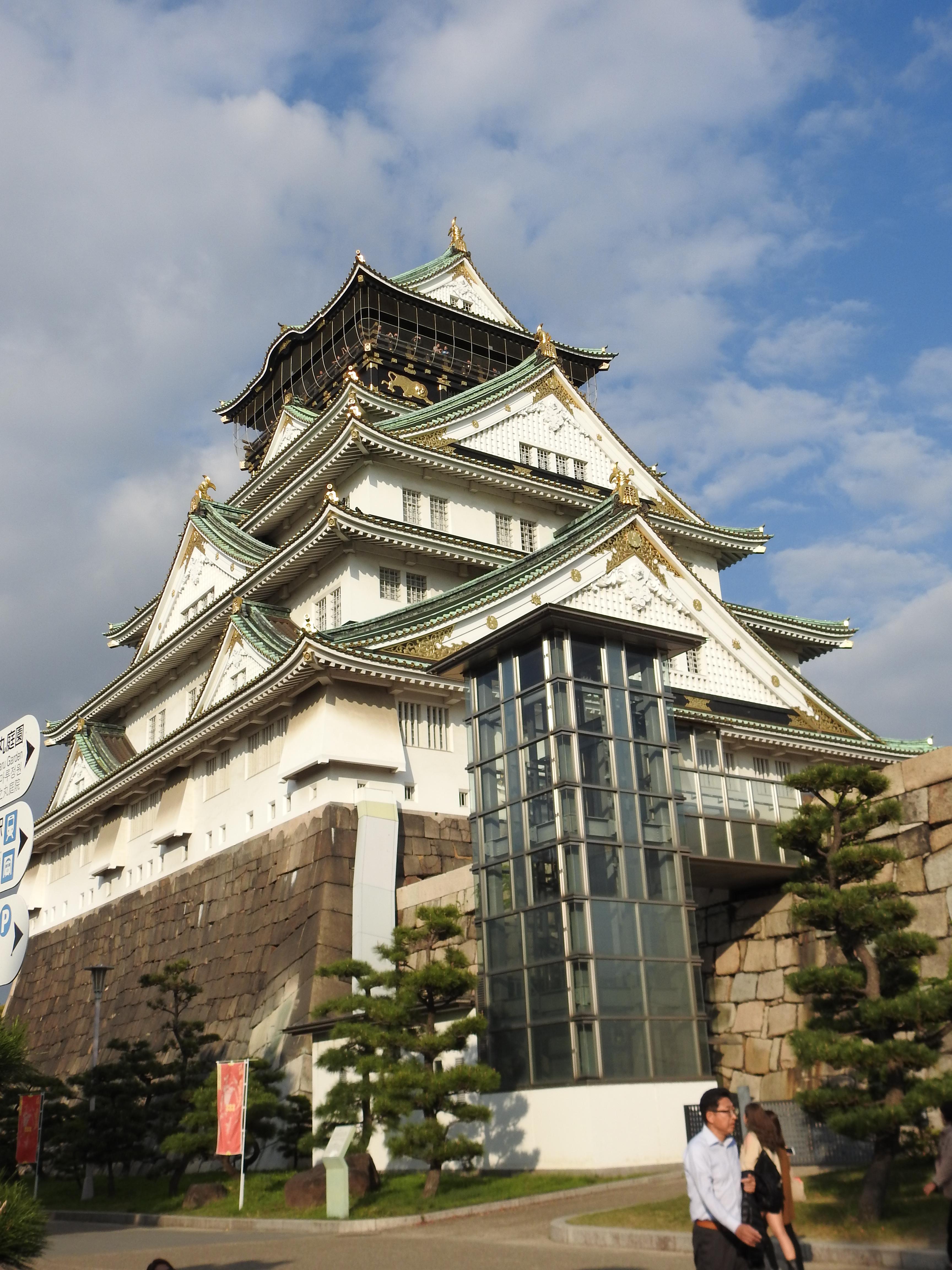 Yet, as Wiley pointed out, the place needs a better curator. It is hard to make betrayals and battles boring, but they managed to do so. Lacking an instinct for intrigue, the explanations would hint at something interesting without delivering the goods: “Tomatsu’s campaign gained strength until the betrayal of his generals.”

Why did they do that? Was he difficult or were they cowardly? How did they do it – by dagger at night or through subterfuge? We will never know.

The top of the castle did provide a commanding view of the city, which is particularly nice with the autumn colors. 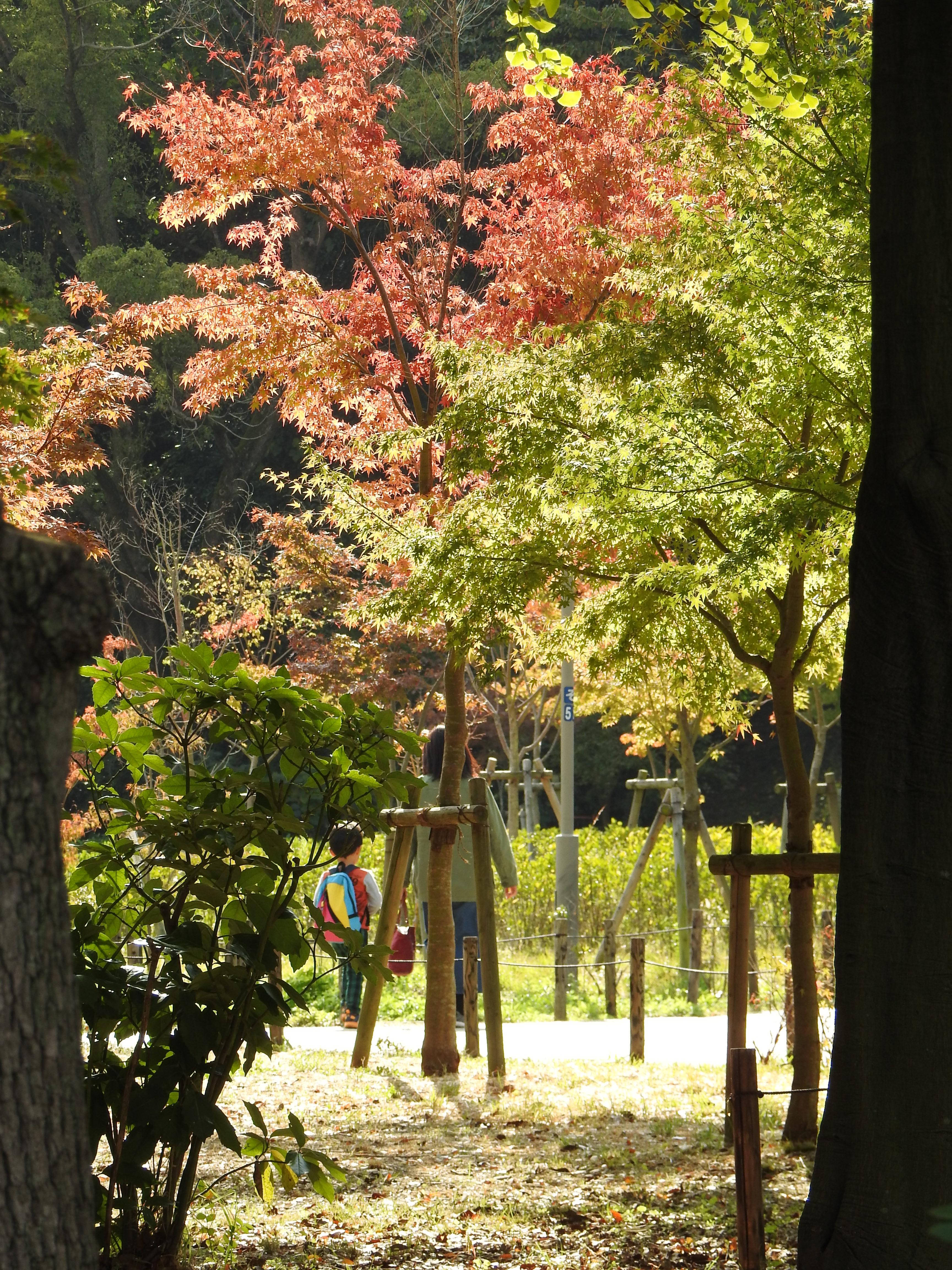 A haiku for Osaka:

Our hostel is a pit.

I will give you a moment to wipe off your tears.

Speaking of tears – I must tell you about Tommy Lee Jones. First, he is the boss. By that, I mean that he is everywhere as one of the spokesman for Boss brand coffee (served hot or cold in cans at convenience stores and ubiquitous vending machines). 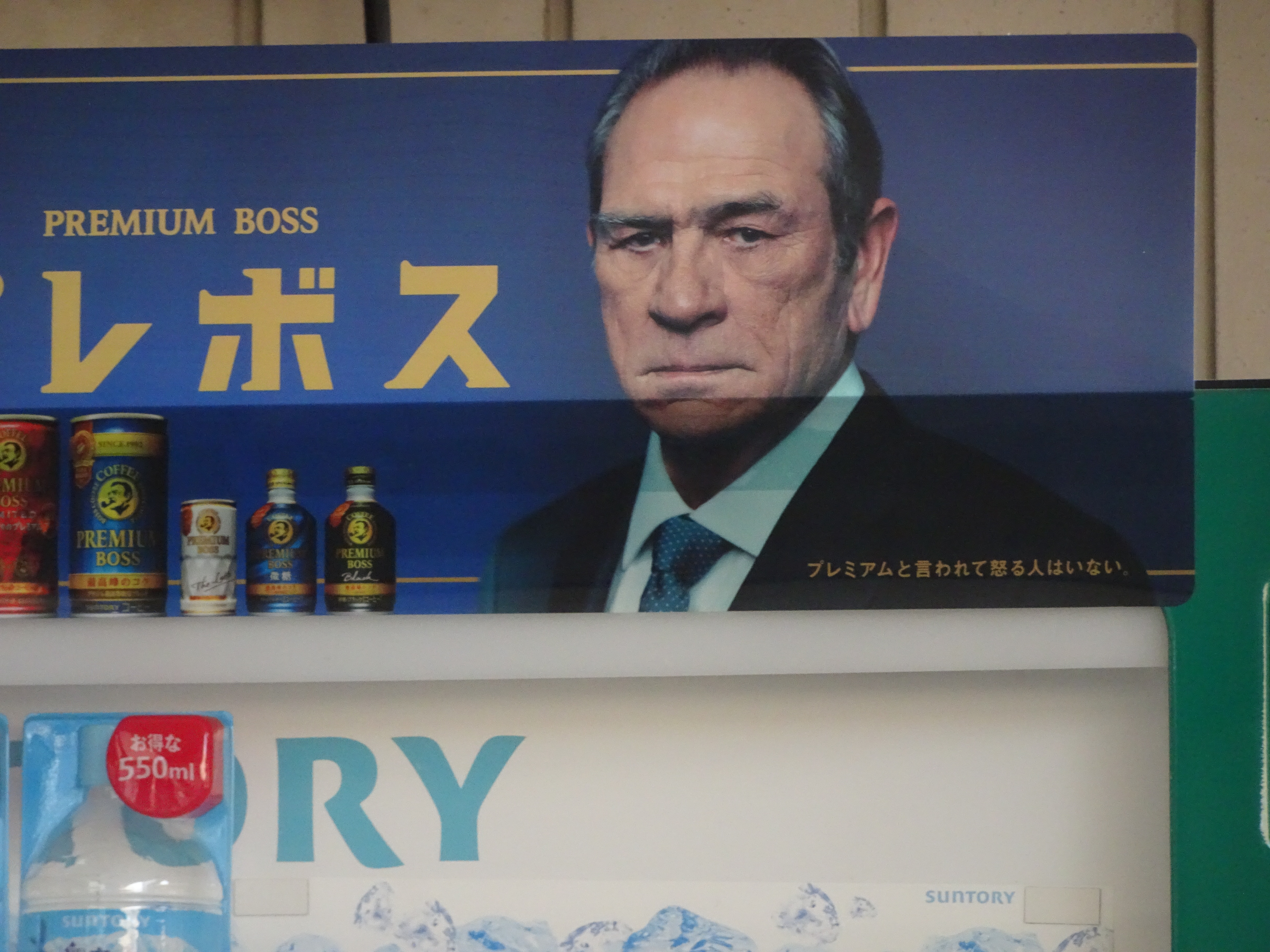 I had read that he is fluent in Japanese and is a very successful spokesman in Japan, but I did not expect to see him 20-30 times everyday. One particular ad hit our fancy. 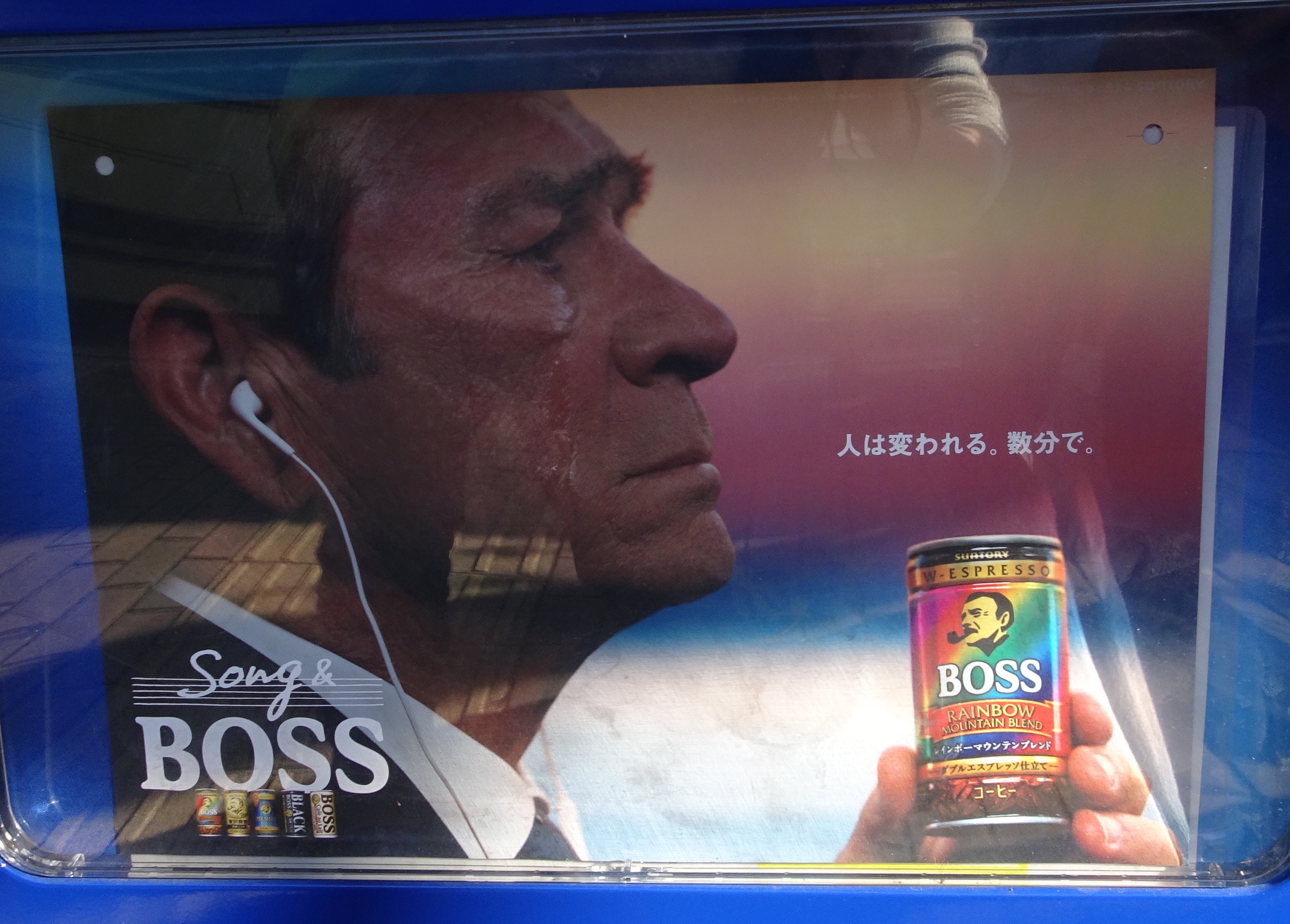 Here, the manly TLJ is crying while looking at his can of Boss and listening to his earbuds. Let us assume that the coffee is not the source of the tears, but instead the beautiful music. While I think the suggestion is that he is being moved by some majestic music like a Verdi opera, I’d prefer to believe he is listening to Willie Nelson’s “Always on My Mind”.   Nevertheless, it inspired the kids to make this photo. 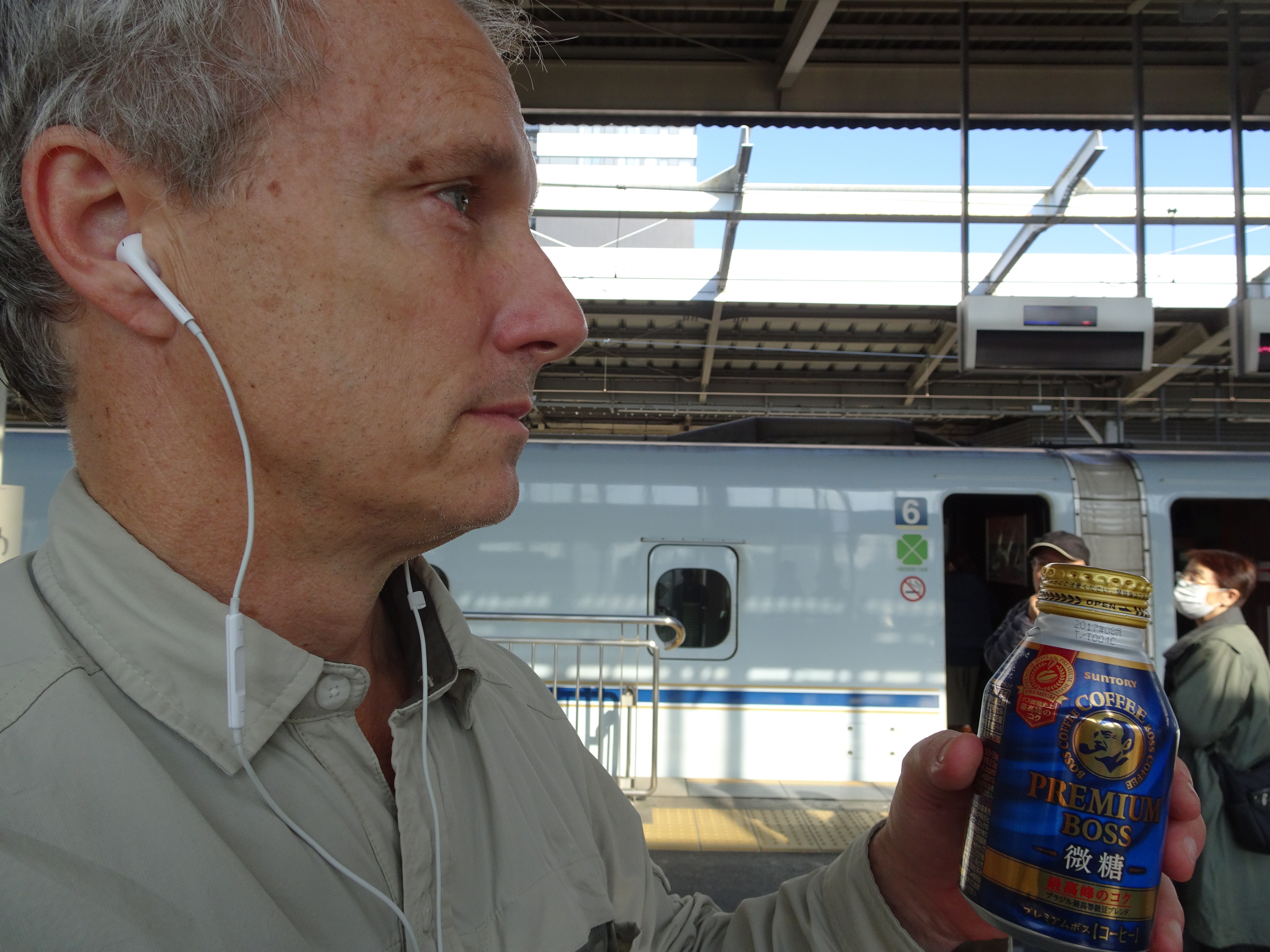 While our neighborhood might have looked dilapidated, the city center (second largest in Japan) was hopping with people and lights and excitement. After grabbing a Starbucks, we walked for almost two hours watching the people watch each other (and, of course, us as well). 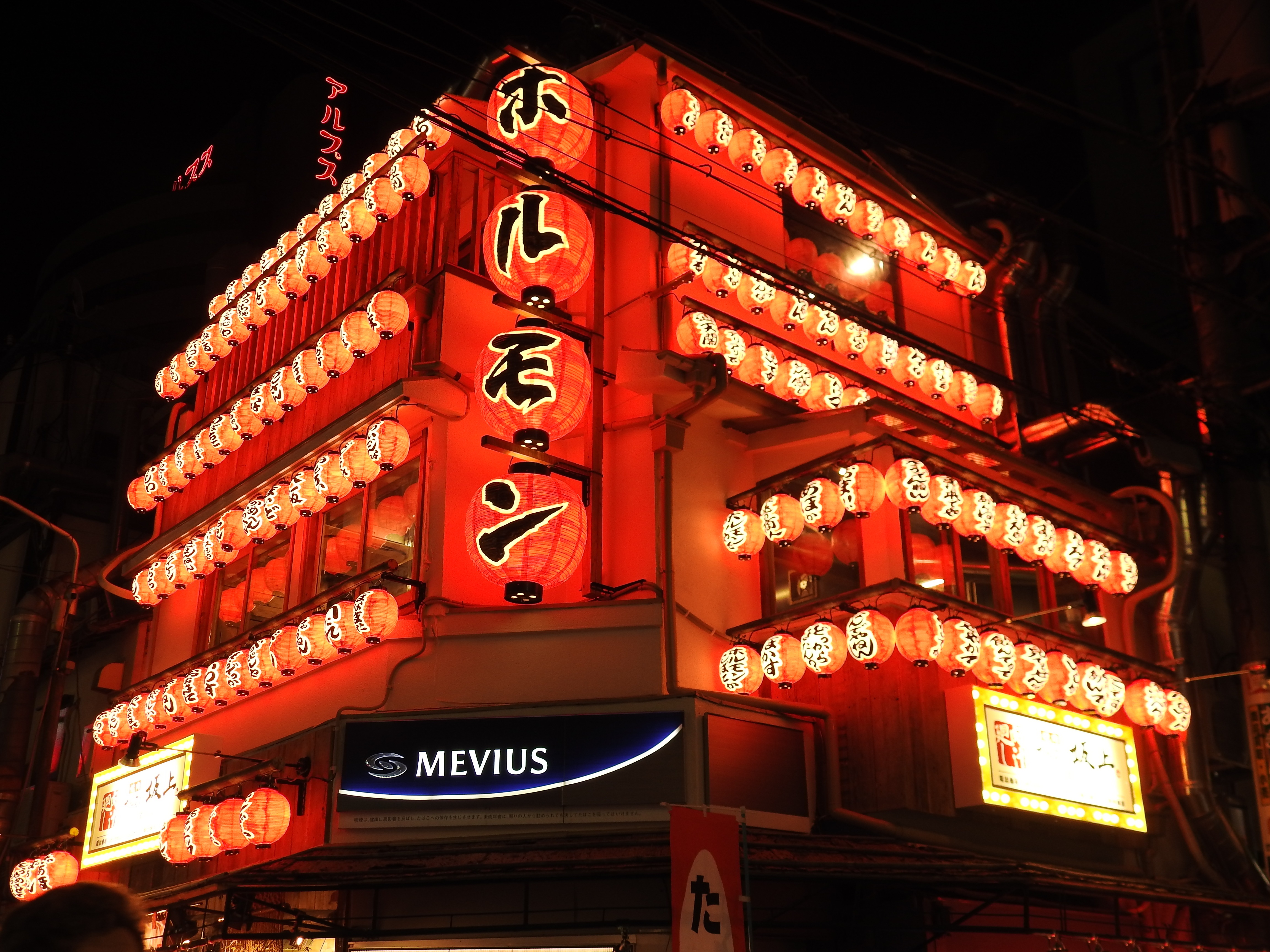 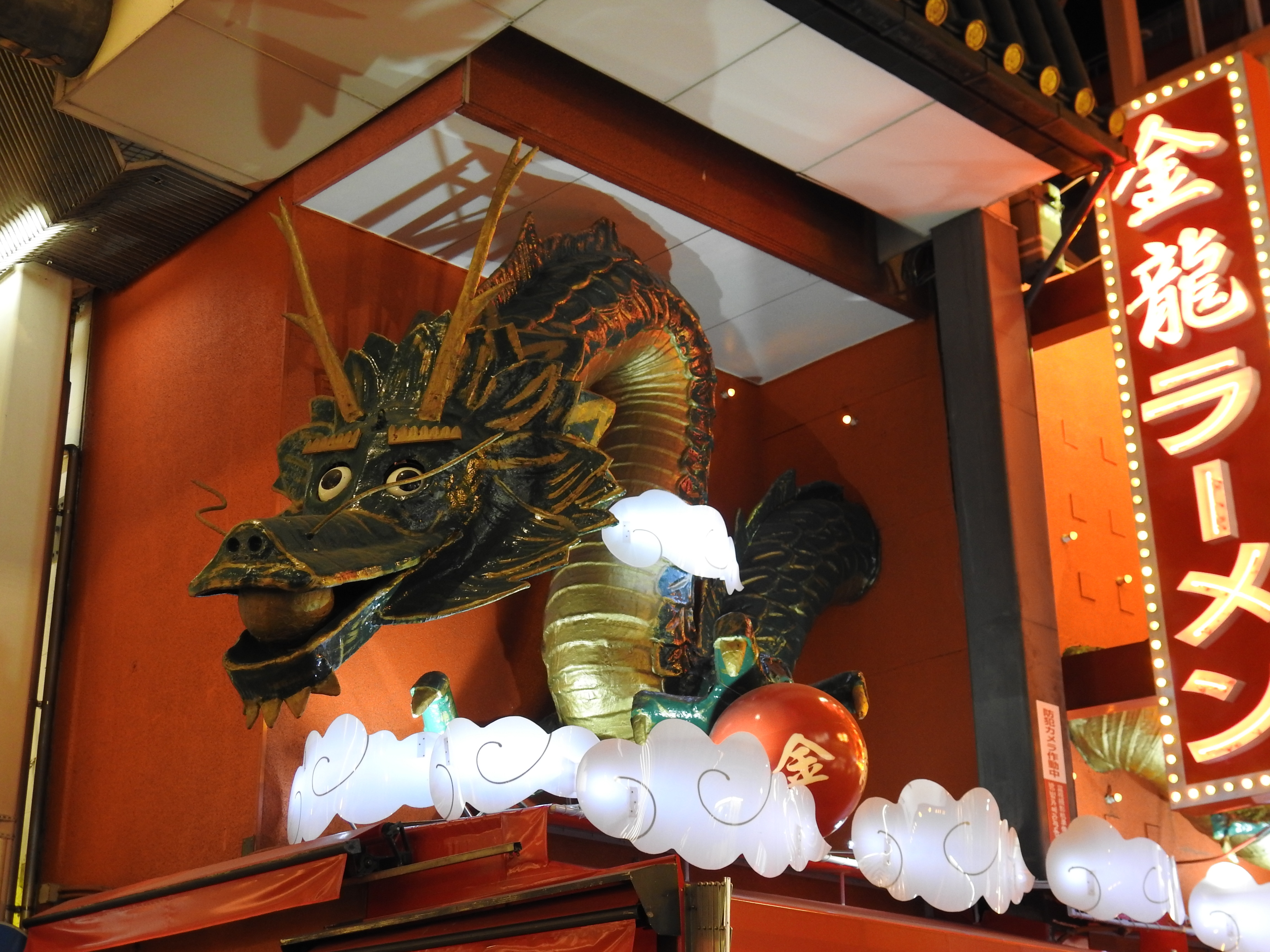 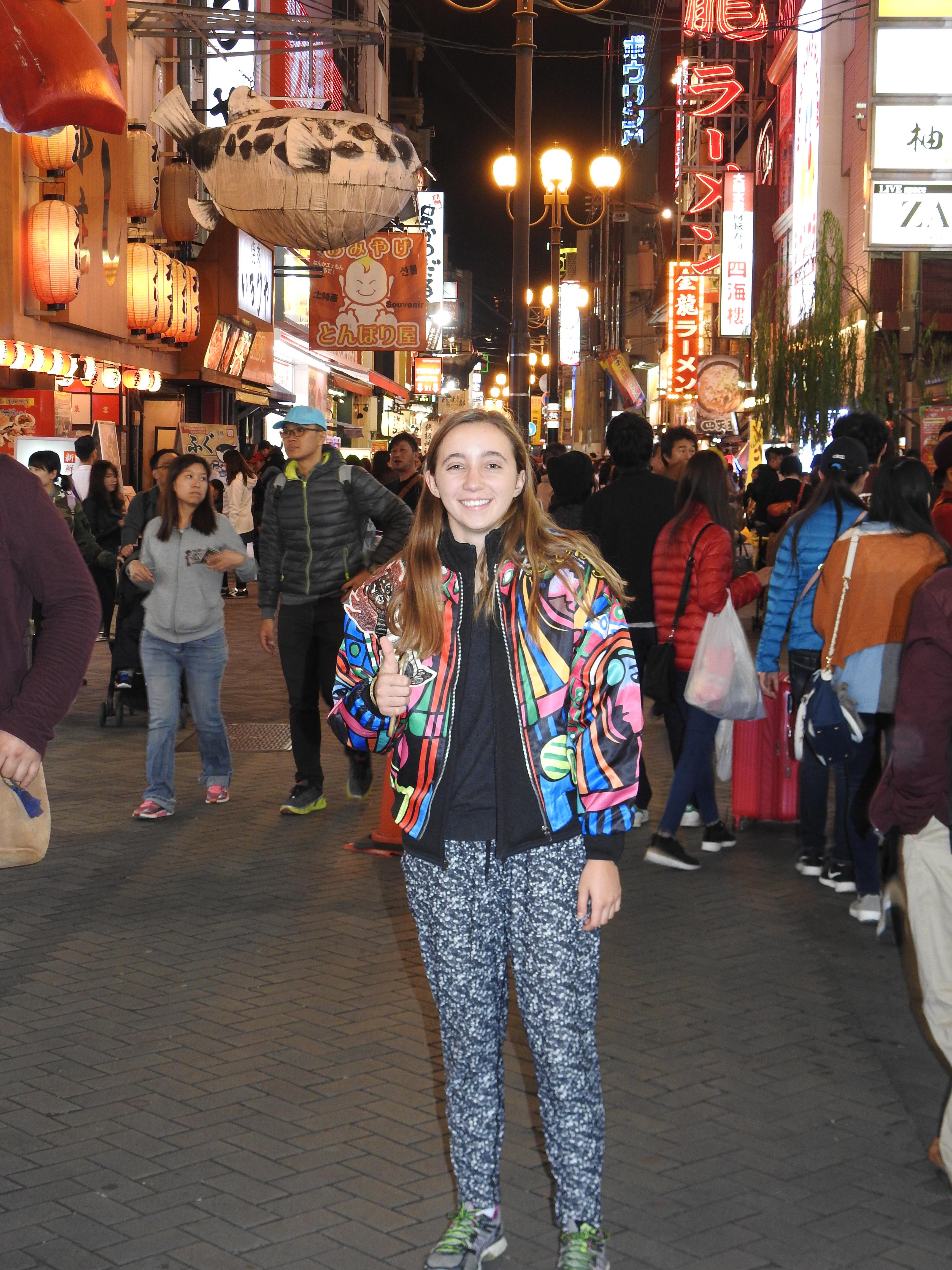 Our hostel host gave us a map that designated several areas

We ended our walk between the “food for locals” and “fish market”. The fish market had been closed for several hours, but we managed to find a little restaurant on its outskirts that was still open at 7:50, so we happily scarfed down salmon sashimi with salmon roe. 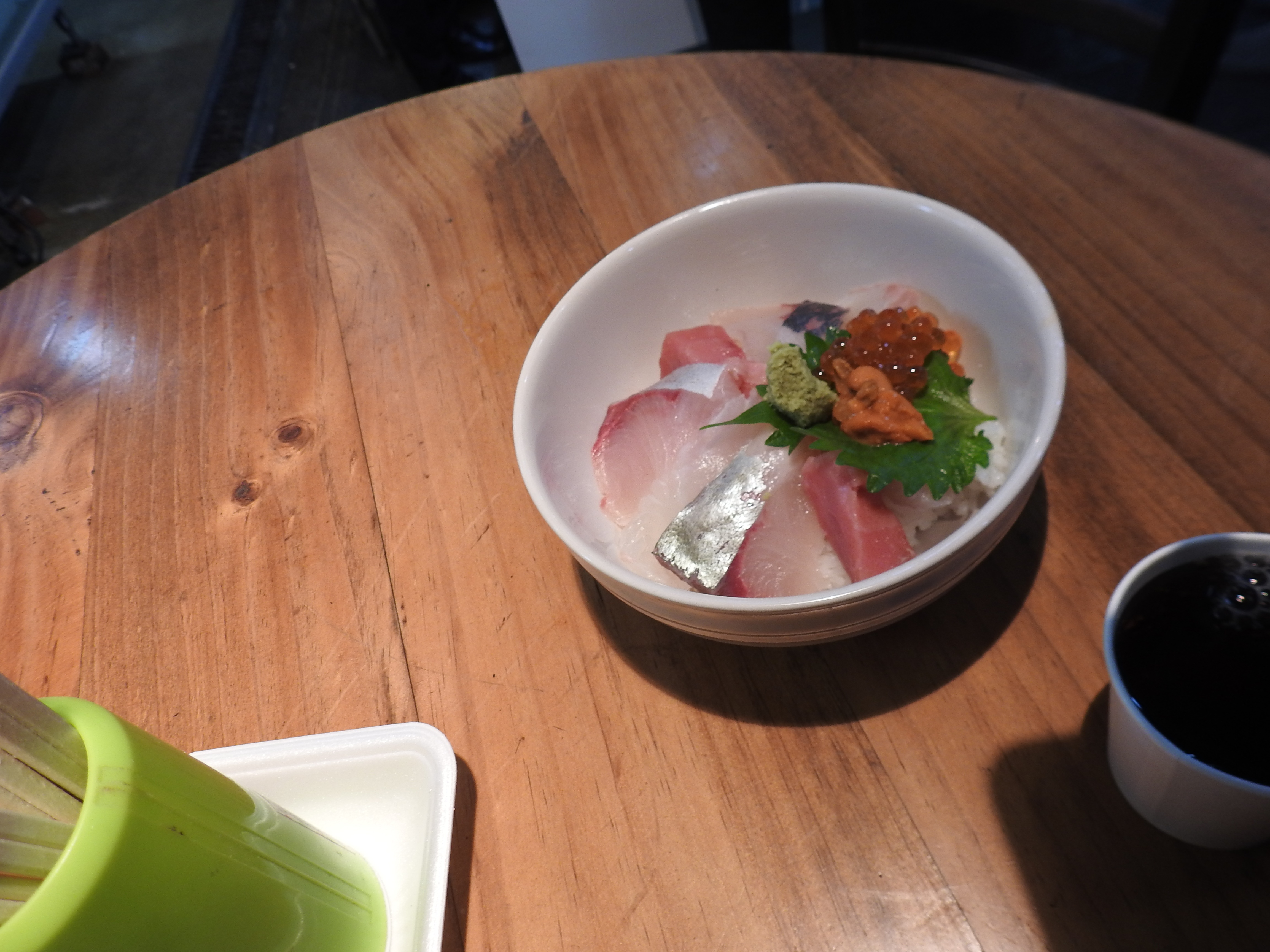 Susie was in heaven. 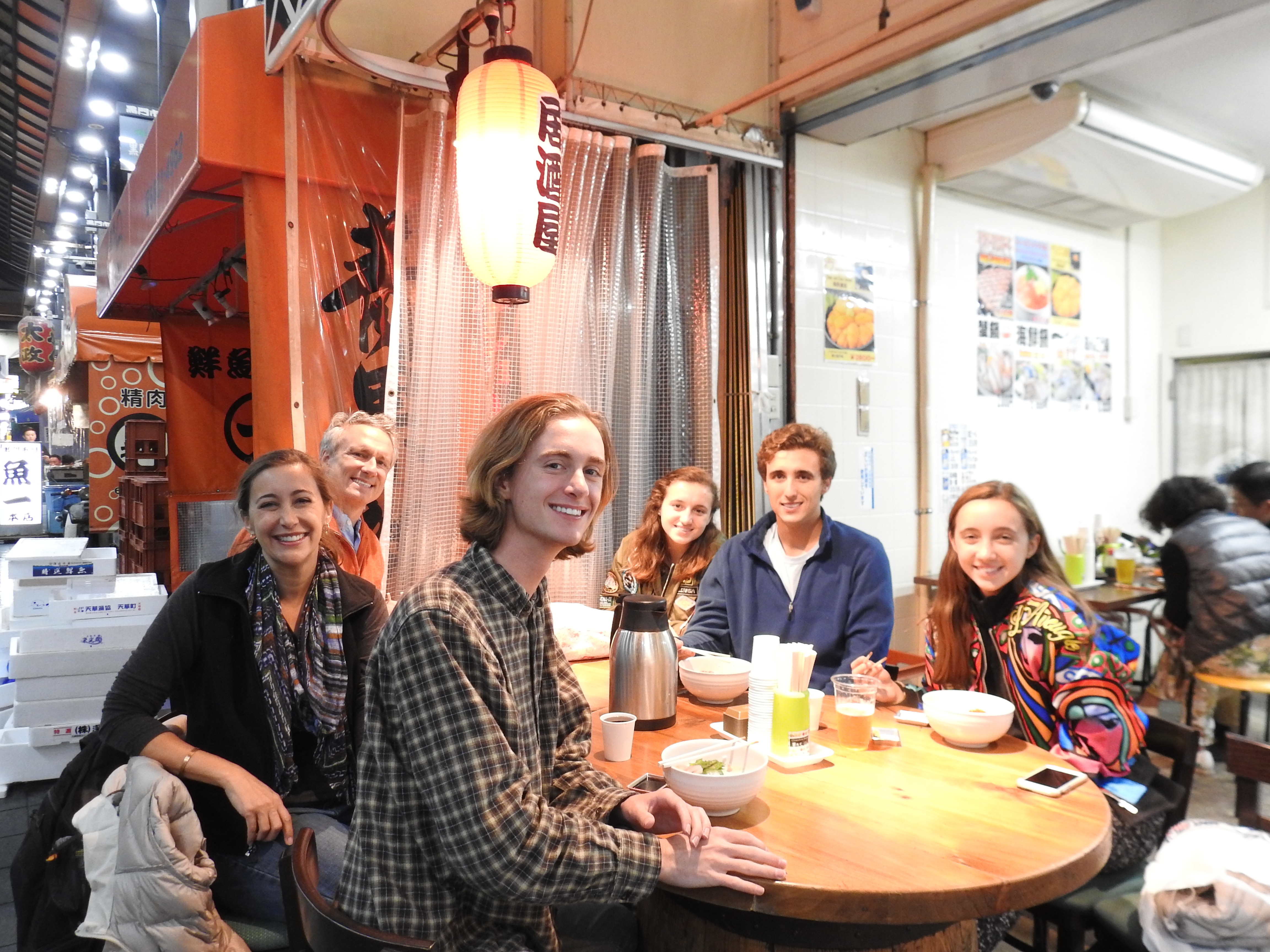 Our return home – including another “adventure enhancer” saw us arrive back at the hostel around 10, or 5 hours after sunset. Happily, we were almost too exhausted to notice the quality of our rooms!