The Mother of Dragons? 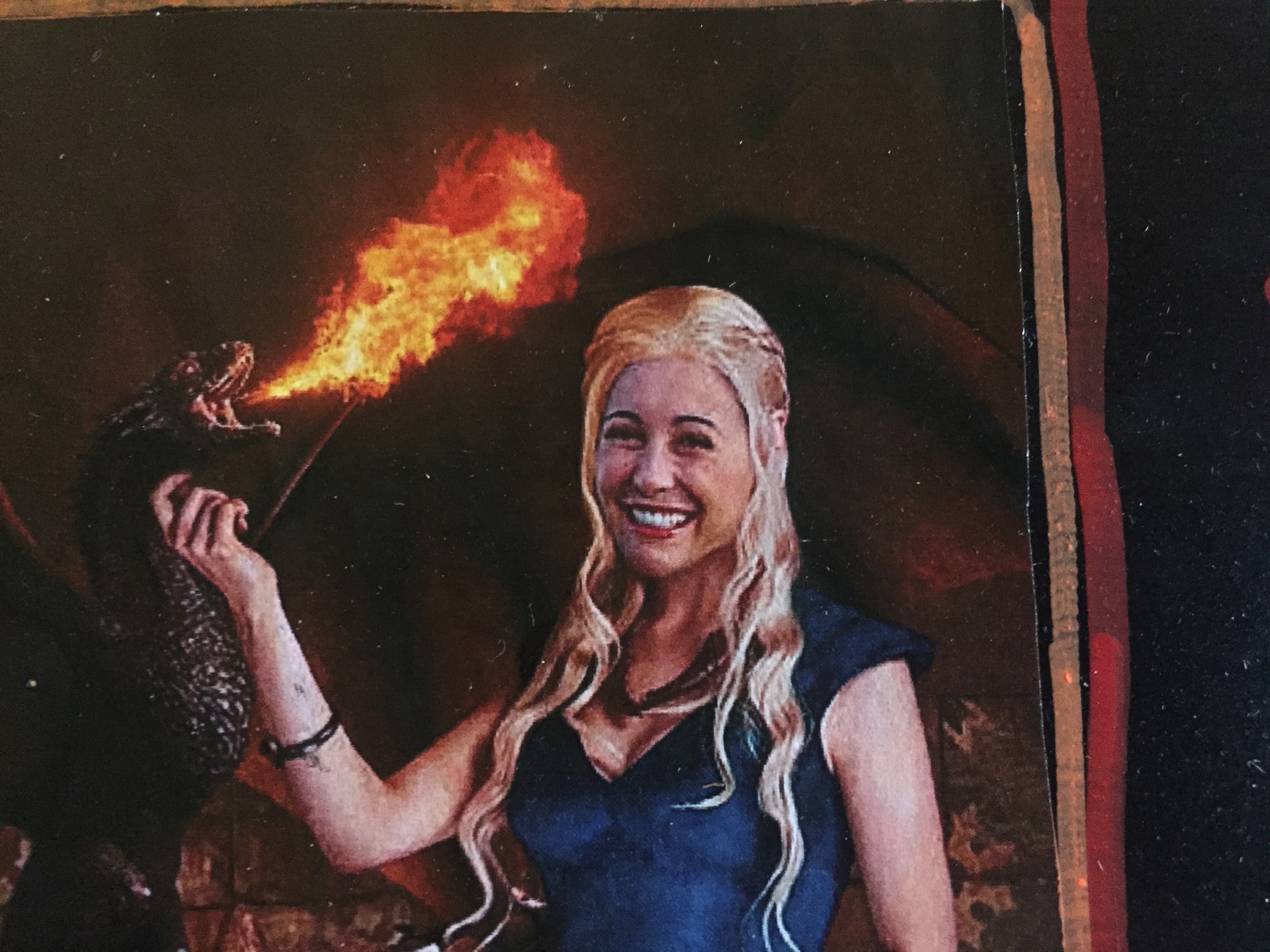 Few things make me happier than seeing Susie Ma’am giddy.  Being a camp director can feel a little serious at times.  After all, we have an incredibly serious responsibility – your children. One of the tricks to happiness is to remember all the growth and joy and not focus on the potential issues. Each day has more of the former than the latter (many, many times more), but the latter tend to wear on our hearts more.  We worry about the homesick camper, the cabin disagreements and the inclement weather. We consciously choose to focus time each day to hear the stories of campers overcoming fears or honing social skills.

But occasionally, something will happen that will truly tickle Susie Ma’am.  She has a young and infectious laugh that I cherish.

Yesterday, she came to me in the Fillin’ Station and asked me to come with her, “I want to show you something.” She had a twinkle in her eye, so I was interested to see what had amused her.

Before I go further, I should explain a camp tradition. Every cabin makes a plaque that will hang in the Fillin’ Station.  The plaques should (ideally) include the cabin name, the year, be colorful, and list all the cabin members.  When you enter the Fillin’ Station, you see literally thousands of plaques going back over 40 years. The original years created flags out of pillow cases, but these are fading and fraying.  The plaques are better memorials, and they offer a cabin the chance to engage in some collaborative and creative play together.

It should be noted that all plaques are not created equal. The girls are consistently cuter and more colorful than the guys. They take great pride in their themes, their color choice and their artistry.  The guys occasionally see the plaques as more of a responsibility than an opportunity, so they can produce bland plaques.  But there are exceptions – and today’s story is one.

Some of the best plaques are legendary. Some are known for their artistry and some for the names on them.  If you had enough time, you would see a Super Bowl MVP, Grammy nominees, elected officials, a founder of one of the largest tech companies in the world and (most importantly) the names of young women and men who made Camp Champions a second home.

Occasionally, a cabin comes up with a unique approach to their plaque.  It was one such plaque that amused Susie Ma’am.  Another camper had seen it presented at Plaque Night and told her about it.

The young men of 008 (those between 10th and 11th grade) are the creators of the plaque.  It is worth noting that they were worried that she might not like it. They clearly do not appreciate her sense of humor or how much she loves the idea of being a part of our campers’ lives.

She led me to the plaque that is pictured with this blog. 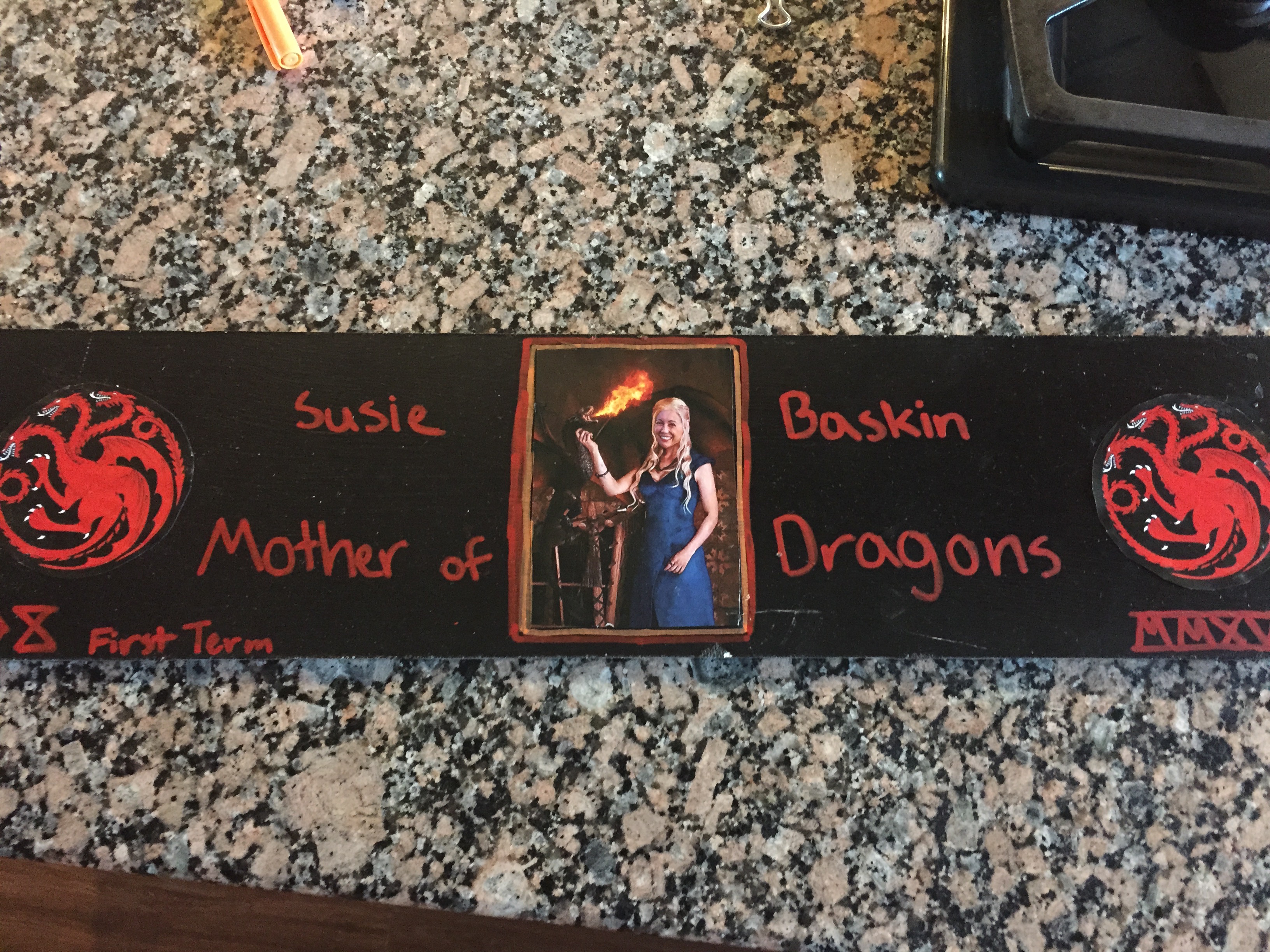 The campers took a picture and modified it to include Susie Ma’am’s face.  The plaque states simply, “Susie Baskin: Mother of Dragons”.

Frankly, that is awesome.  Susie Ma’am was laughing but also slightly tearing up.   She loved that the guys wanted to “honor” her by featuring her on their plaque.

Rule #1: do not try to make sense out of this. I am not sure why she is the mother of dragons or exactly what this means.  Any attempt to assign a deep meaning to it should end with this statement – “It was made by 16-17 year-old guys with a quirky sense of humor”. They simply wanted to make something that would make people laugh.  Susie Ma’am appreciated the fact that when they decided to make their statement, they thought of her.  She loves being a mother in general, so being a mother of dragons is like a promotion.

Rule #3: do not read anything into the source of the photo.  Susie Ma’am assumed it was from “Magic the Gathering” or “Dungeons and Dragons”.  It is actually a photo from Game of Thrones, but she did not realize that.  In fact, nor did anyone under 16 years of age, and the show was never mentioned by name. For the campers, it was simply a cool picture of their camp director with a fire-breathing dragon. Seems like a good person to have at camp.

I did miss an opportunity to have a little fun.  When I learned that the young men were nervous about her reaction, I could have told them that she was upset – just to see them sweat!