You have already heard about Man Cave (http://blog.campchampions.com/lego-lessons-in-the-man-cave). Frankly, I think we could sit in a room, grunt and shuffle rocks around and the boys would like it as long as we call it Man Cave.  Friendship Games works as a name for the girls.  They openly value friendship and communication, so we are good with this name. Guys, on the other hand, love the Cave.

Every morning, we have a break between 2nd and 3rd activity featuring a piece of fruit.  We, however, were smart enough to avoid calling it a “Fruit Break”. Nope.  It is a Fruit Frenzy.  A FRENZY.  I am excited just thinking about it.

The Senior Campers guys (those finishing the 9th, 10th and 11th grade) play a game called War Lords. This is a powerful and even ominous name that inspires enthusiasm.  But let me describe the game.

The ball is simply a Wiffle Ball. Each player has a Pickleball paddle, which is made of hard plastic and is roughly the size of a racquetball racquet. The goalie has a paddle and a rack from the industrial dishwashing machine.  You know the racks that you place a cup in upside down?  That is the goalie’s tool.  The game is essentially like lacrosse or soccer; each team attempts to advance the ball and hit it through the net.

Pass the goalie with the dishwashing equipment.

If we were to call it “Pickle-Crosse” or “Wiffle Pass the Dishwasher Goalie”, no one would care.

But it is called War Lords and the Senior Camper guys deeply believe that it should be an Olympic event.

[On a related note: the sport of “Curling” – one of my favorite Winter Olympic indulgences – would benefit greatly from a better name.  “Ice Lords” or “Broom Battle” would certainly be good for a 10-20% increase in viewership.]

The final example comes is related to the picture I include with the blog.

Every camper goes to every meal. We call the campers to meals by division and they stroll to the Fillin’ Station (our Mess Hall) to eat.

Except the Rookies (the youngest boys). They do not respond to a simple call and they certainly do not stroll.  They line up with their counselors who have an American flag and Camp Champions flag. Whoever is calling campers to the Fillin’ Station essentially announces a charge.  The entire Rookie Division then runs to the dining hall.

We call this the Running of the Rookies. 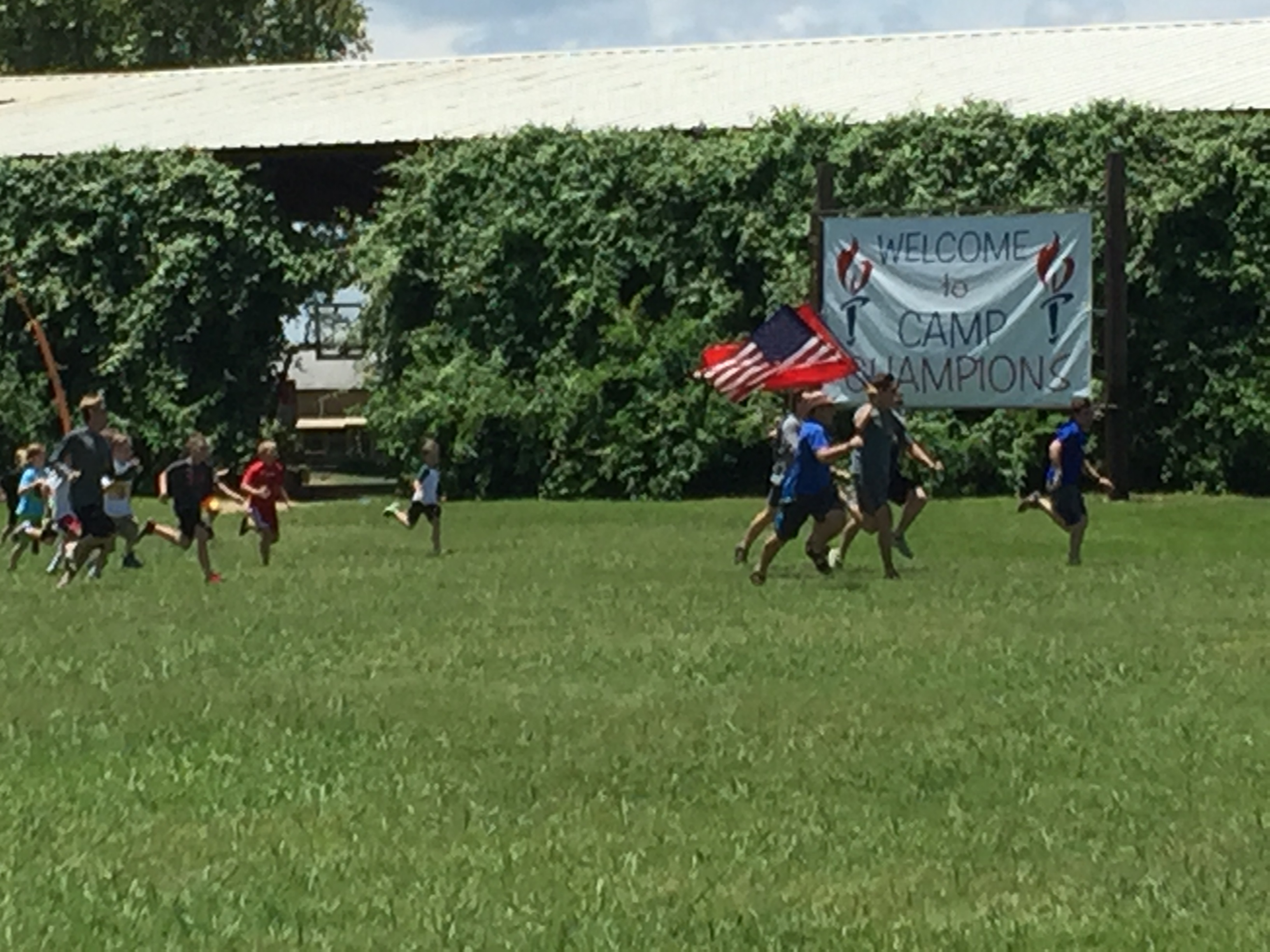 If you watch this spectacle without smiling, I would worry about you.  I will jog outside just to watch it.

So something as simple as going to dinner becomes a mission, a charge, a shared experience.

One of the best benefits of summer camp is showing every child that even the mundane can be made magical.  I hope that every camper (and counselor for that matter) leaves camp striving to find the silly joys in the simplest of tasks.