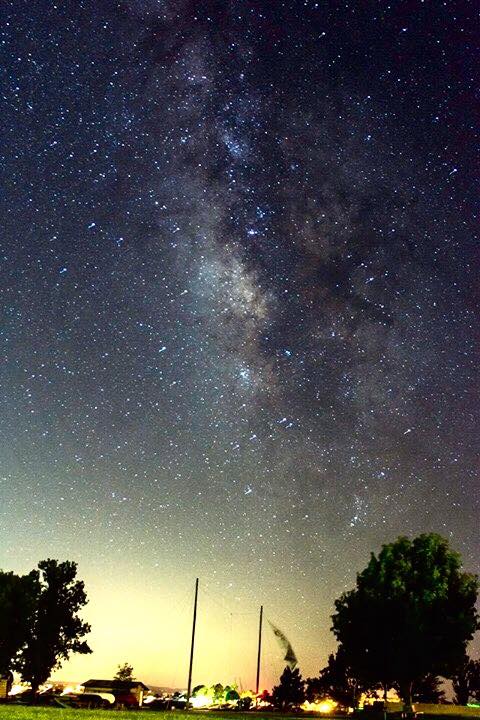 A dark sky is beautiful, but it’s important for other reasons, too. On their website, the IDA will describe many of the environmental impacts dark skies, and the negative effects of overlighting. At camp, the importance of our starry sky is harder to measure. But I’ll do my best to describe it here.

We’re right down the lake from Horseshoe Bay. Our night sky here at camp has always been a point of pride. We actively take care of it, too – with the exception of the senior camper cabins, none of our cabins have lightbulbs during the summer, and we are always sure to turn off all floodlights over the fields and buildings every night. (We leave just a few small ones on near the cabins and bathrooms for safety if anyone wakes up in the middle of the night).

There are few things in life more powerful than sitting under the stars, especially when those stars are as abundant and bright as they are here in the hillcountry. Every night that it isn’t cloudy, you can easily see the Milky Way – something that most city-dwelling folks don’t get the opportunity to experience very often. Some of our younger campers have even pointed, asking “What’s that?” or thought it was an unexpected cloud.

Most counselors utilize the sky as a calming feature to bring the cabin together or provide comfort. A common time for homesickness is right before bed, when nothing is going on, and a camper might miss Mom or Dad tucking them in.  One counselor brought her homesick camper outside and they looked up at the stars together. She said, “Your mom and dad can see that same moon. They can see those same stars. They’re thinking of you, and they’re hoping you’re having a blast.”

Usually, it’s not simply the counselor’s words that put the camper at ease. It’s a feeling of connectedness that can really only been found under the night sky. And while their parents can certainly see the moon and some stars, for most, their sky isn’t exactly same. Only the campers are lucky enough to see a sky unfettered by city lights.

Young ones aren’t the only ones who enjoy the stars. For the older campers, a favorite activity is “star-tipping,” or spinning around and around looking up at the stars until they tumble over, laughing, onto the grass. And conversations illuminated by starlight somehow end up deeper and more honest.

Living under camp’s night sky, especially if coming from a big city, is a “disruptive moment” – an unfamiliar setting that causes our brains to open up and absorb more fully everything that’s going on around us. It’s one of the things that makes camp a growth experience even before you get to all the lessons learned from activities and cabinmates.

Sometimes we’ll talk about constellations and legends at Torchlight. One of our department heads this past summer, Torie ma’am, loved to share stories based in the stars, such as the legend of Naga the Goat. Your camper might remember Naga! In the summer, we can easily find the constellations Scorpio, Cassiopeia, Corona Borealis, Delphinus, and the Big and Little Dippers; planets Venus and Jupiter; and the Summer Triangle (made up of the stars Altair, Deneb, and Vega, which are the brightest stars in the three constellations of Aquila, Cygnus, and Lyra, respectively.)

I spent the last four years in college near Los Angeles, so my nightly star-viewing opportunities were limited. It was oddly disconcerting to look up at night and see so little. Here, though, looking up never gets old. No matter how many nights I spend at camp, I never tire of seeing the stars.

I hope that campers next summer will come to appreciate the stars as much as I have.