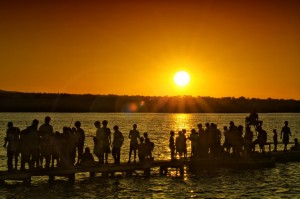 This week, we are hoping to deliver stories that stress “Tenacity and Purpose”.

Last night, I told the campers the Warrior-Worrier story (see the other blog from today).  Tonight, I want to share a story from the stars about Scorpio.

Actually, this is not the actual legend of Scorpio, but a modified one.  The original one was a little long on pointless death and short of teachable moments, so we decided to rewrite it.

If you have been reading my blogs, you know that Scorpio is my favorite summer constellation.  He will be wonderfully visible at the end of Torchlight tonight from the Coliseum, perched over the lake.  Here is his tale (Camp Champions’ style).

Taurus the bull, the greatest and most powerful animal in the world, captured the Seven Sisters, whom Orion loved.    Orion was the finest hunter in the ancient lands, so he pursued the great bull Taurus and eventually killed him.

The Seven Sisters, however, were not impressed with his acts.  They had come to appreciate the great bull and did not like to see him slain.

Their rejection angered Orion, who then decided to make a great boast.  “I care not for anyone else, man or beast.  Since I am the world’s greatest hunter, I will kill all the animals in the world!”

Artemis, the goddess of wild animals, and Gaia, the goddess of the Earth, were both frightened and disturbed by the great hunter’s plans, so they called a meeting of all the animals.

“You face a great threat in Orion.  He body is strong and his arrows sharp.  He never misses his target.  If he chooses to hunt you , you are in great danger.  We do not think any one of you can defeat him, so you must come up with a plan to stop him!”

The animals then debated who should approach Orion and potentially fight him.

Lion – king of the jungle – was afraid and refused to answer the call.  In the same way, Rhinoceros, Elephant and Eagle also refused.

All of the animals wanted a champion to confront Orion, but none wanted to be the one to do it.

At this point, an unlikely volunteer came forth – Scorpio the scorpion.  He was small and not strong.  At this point, he did not have any stinger or poison, only two small claws.  In short, he was simply a defenseless insect.

Nevertheless, he scuttled forward and shared these words, “I am not strong, not fast, nor dangerous.  But I will confront Orion.  I have no idea what I can do, but I do know one thing – I can try!”

Artemis and Gaia were so moved by the bravery of the lowly bug that they granted him a great gift – a poisonous stinger to go on his tail.

So Scorpio went to Orion and said, “Mighty Orion, greatest of all the hunters, I ask you to change your mind and spare all the creatures.  If you give me your word, I know it is true.  What do you say?”

Orion said nothing.  He simply laughed and swatted Scorpio away.  The scorpion landed on his back, which is very bad for scorpions.  Many cannot turn over if they land on their backs.

Scorpio struggled and fought for minutes.  But he knew he could not fail, because he had a purpose more important than anything else.  He had committed himself to this purpose and the animals.  He would not let them down.

Eventually, he turned over.  He then walked back to Orion and repeated his request, “Please promise you will not kill all the creatures.”

Again, Orion knocked him onto his back.  Again, the scorpion struggled to get to his feet.  For a third and final time, he pleaded with Orion and again he as cast aside and thrown to his back.

Exhausted, he found his feet again and approached the hunter.  Except this time, he did not make a request, he made a promise.  “Orion, I cannot allow you to slay my brothers and sisters of the world.  If you will not promise peace, I will stop you!”

Orion no longer found Scorpio funny.  He drew his bow, nocked his sharpest arrow and prepared to shoot the scorpion.

Scorpio, however, anticipated this and jumped onto Orion’s foot, making it impossible to shoot the scorpion who then said,   “I am sorry Orion, but I must stop you.”

Scorpion then stung Orion with enough poison to kill many men.

But not enough to kill the great hunter.  Orion swung his bow and hit Scorpio, breaking his claws and knocking him aside.  The sting however, made the hunter a bit slower than normal.  As he picked up the arrow he had dropped and attempted to aim it, Scorpio managed to hobbled and crawl back to Orion.  Just as the hunter’s arrow was poised, the scorpion gathered his last reserves of strength, jumped onto Orion’s leg and delivered 3 more stings.

These stings were too much.  The lowly Scorpion had triumphed.

All the beasts joined Gaia and Artemis in celebrating the victory.  Many of the animals asked to have stingers as well.  They declared, “the stinger has made Scorpio the most powerful of us all.  Share with us this gift.”

But the two goddesses shook their heads and spoke, “You know not what you speak.  The stinger was important, but that was not what gave him victory.  No, his most powerful weapons were his Purpose and his Tenacity.  He knew what he had to do and he would not quit until it was done.  He did not fear failure or defeat.  He stayed committed and focused.  That is his power.  Any of you can have that power too!”

Artemis and Gaia agreed to honor Scorpio by casting him into the night sky and making him the most beautiful of constellations.  They also decided to grant all of his kind with stingers that they use to this day to defend themselves and feed their families.

And that is the Legend of Scorpio.

Tomorrow, we will share some more peaceful (but still poignant) stories!