After Torchlight, Susie Ma’am was walking behind a group of campers.

Here is the conversation she heard.

“Man, you are really good at catching those lizards.  I keep trying, but I can’t get them.”

“It takes practice.  You have to corner them.  It is also important to be quick.”

As she recounted this conversation, I could tell Susie Ma’am was withholding some piece of information.  I was right.

Yes, Susie Ma’am had been following four high schoolers!  Separated from mobile phones, game systems and the internet, they had discovered lizards.

I cannot tell you how happy this makes me.

Like these kiddos, I also become less tech-focused in the summer.  Sure, I post these blogs, but I watch essentially no TV and do no recreational internet surfing.  Instead, we substitute the internet with the interpersonal.  We replace texts with tales.

The Fourth of July 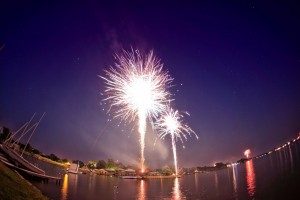 Our day of activities has been a huge hit.  The younger campers (roughly 12 and under) had slip-and-slides, hamster balls, water balloon splashing over counselors, multiple runaround games, watermelon carry (with vaselined melons) and group Pictionary.

The older campers enjoyed a pool party with odd and fun games.

All of this was co-hosted by our 10th grade Senior Campers, who were covered in red, white and blue (and smiles).  They did an excellent job of embracing this responsibility and practicing their leadership skills.

This afternoon, we had a beach party followed by free time for the younger half of camp.  The Beach Party consisted of a free swim (ropes swing, glob, jungle jim, etc) at the boys swim bay PLUS a host of large rented inflatables with slides and games – a huge hit.  The older campers had the reversed schedule – free time followed by the Beach Party.  During their free time, we offered a yoga class.  After having multiple requests from campers, we added yoga 3 days a week this season.  This morning at our all-camp flag raising ceremony, we explained that Betsy Ross and Ben Franklin were both avid yogis as well as patriots (note: I hope that none of your children ever fail a history test based on my improvised revisionist history).

Dinner was a picnic coupled with a massive County Fair, replete with multiple activities including throwing pies at counselors, a duck-capture, a fortune-teller, a root beer drink and a hitching post.  We also had a sno-cone truck adding a little extra fun to the event.

Following the County Fair, we had Torchlight with a grand fireworks display.  I was on the girls’ glob tower with Robbie Sir lighting some of the fireworks.  While we did so, we could hear the united voices of the campers singing different songs (ranging from “Fireworks” by Katie Perry and “Don’t Stop Believing” by Journey).  It is impressive that we could hear them over the fireworks.  They had a blast!

And now we will all collapse in our beds with tired bodies and happy minds.

Not a bad way to celebrate the 4th!