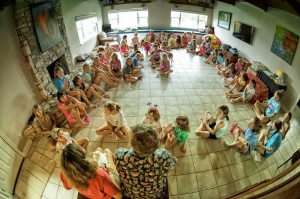 Sometimes you have an idea and wonder, “why did it take us so long to think of this?”

Our after-lunch new camper reception is such an idea.

Joining a camp community is an interesting endeavor.  Camp friendships are deep and robust – far more than you would ever imagine in 3 weeks.  When campers return to camp, they explode with excitement seeing their old friends.

They are also excited to meet the new friends, but the initial excitement of the reunions can be a tad off-putting to the new campers.

Further, the new campers then attend our first Torchlight ceremony.  This ceremony involves singing two Camp Champions-specific songs (the “Torchlighter Song” and “Golden Champions” – we post the words but they must learn the tune) as well as a series of fun traditions, chants, call-and-responses, etc.  In short, it is a ton of fun that makes about zero sense to a first-time observer.  Of course, new campers quickly learn the traditions and songs and then feel like true insiders.  Any culture or community that has a strong identity has traditions that are unique and must be discovered and learned.

But in the meantime, how do you assure that the new campers feel loved and accepted (if not also confused)?

We are making two special efforts.  First, we had every new camper stand last night and we gave them a thunderous greeting.  I told them that they are a wonderful and critical part of our community and that we are delighted that they are here.  I also stressed that every one of us had been confused about Torchlight our first time too.  We told them that we are a caring community and that they will soon know the traditions.

Our second special effort was a cookies-and-milk reception after lunch today (with alternative treats for dairy and gluten allergies).  We brought in every new camper in one of two receptions, one for girls and one for boys.  After their treat, we tell them how excited we are to have them at camp.  We also gave them a chance to ask any questions that they might have.

I must say, I was impressed by the quality of the questions.  Some asked about Trojan Spartan initiation (later this week).  Others asked why we wanted to run a camp.  One said, “if running a camp is so great, why don’t you do more than one?”  I then told them that we are partners in a camp in Massachusetts and one in North Carolina (Camp Pinnacle).

“Because Susie Ma’am and I want to be here with you.”

One camper asked how much we spent on improvements, on average, over the past 5-10 years.  Suddenly I felt like I was part of a due diligence questioning for a potential investor!

Here is another great exchange:

Susie Ma’am: “You will know when the Rookies attack you!”

“These cookies are great!  How did you make them?”

“The Fillin’ Station team made them.  Want to know the secret ingredient?”

At this point, 10 boys say “yes” while one boy quiet says “I know what is coming.”

“The secret ingredient is love.”

Groans from most.  The one boy that said “I know what is coming” just shook his head and said, “yep.”

A girl asked about their overnight.  “What happens on overnight?”

“You cook your meal, make s’mores and sleep in a treehouse.”

A whispered voice to our left responds in deep seriousness, “I love trees.  AND I love houses!”

We want to send them a clear message – we care about you and you are part of our family.  Bringing them into our house helps cement this message.

We saw so many bright and excited faces today.  Seeing them and hearing their questions gets me especially excited for the next 2-3 weeks.  I cannot wait until I see them grow at camp, make friends and have a blast!

PS  On an unrelated note: we have a former camper and counselor who is a guest photographer this session.  He recently moved to California from Japan, but he considers Camp Champions his second home.  The picture above is one of his.  Most of the unusual photos (fish-eye, enhanced color, odd perspective) are his work.  I hope you love seeing the place he loves through his eyes.