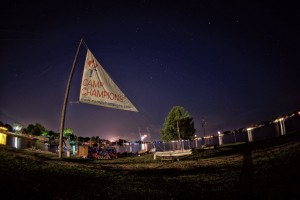 Today, I began aware of several odd coincidences that I thought you would enjoy.

Yesterday, Moak Sir (our Associate Director) gave a tour to a former counselor and his family (wife and 6 year-old daughter).  The former counselor – Gabe – ran into one of our current counselors, also named Gabe.

We learned that the older Gabe had taught the younger Gabe to sail 10-11 years ago as his counselor.

By the way, Gabe the Younger is teaching Altus Sir’s sons to sail this summer.

And the circle goes around.

In a separate conversation with Altus Sir, we talked about some of his fellow counselors in the 80’s.  Two names that came up were Jim Pratt and Alma Doll McCutchson.  Jim and Alma Doll were separated by 4 years, but dated as counselors.  Jim was committed to waiting until Alma Doll graduated from college, whereupon Jim asked her to marry him.

They married and had three boys.

One of the boys is a camper, another is a counselor and the oldest is the Rookie Division Leader.

One son is Alex, one is Austin and one is Travis.

This is getting kinda strange.

Over the long weekend, we had about 20 people visit for an hour – 4 hours each.  One couple met each other here 8 years ago, married and are pregnant with their second child.  Some drove over 8 hours from Oklahoma.  When I asked why they drove so far, they simply said that they did not want to go a summer without visiting.

I am constantly amazed at how many people feel a deep connection to camp.  But I have a theory about why this is so.

I think many people find the best version of themselves here at camp.  They are caring for others, working hard and serving a mission.  Several female counselors have commented that camp brings out the best in the guy counselors – they see caring adults rather than partying college students.

For the campers, camp is an environment where they make deep friendships while showing their authentic selves.  At school, children often need to wear “masks” or pretend they are something they are not in order to fit in.  At camp, it is essentially impossible to wear a mask for 16 hours a day, 7 days a week.   So you reveal your true self and (most importantly) you are accepted for it.

Finally, camp is a place where you can discover inner strength.  Campers who get over homesickness realize that they are more independent than they imagined.  Others might overcome a fear of heights or horses or open water.  We develop strong feelings for places that help us grow.

So every year, we enjoy visits from many former campers and counselors who feel a strong connection to here.