Appreciation in the Man Cave 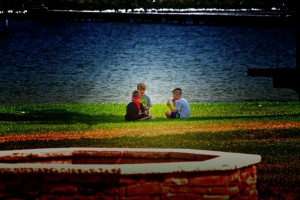 Today, I had Man Cave for both cabin 16 and cabin 17 and spent time with our 21 youngest campers.

Let me be perfectly honest with you.  You NEVER know what you are going to get when you have 6 and 7 year-olds sitting together, especially when they each have a drink that they can spill.

They are also not exactly noted for their attention spans.  Conversations pop from one topic to another in a manner that could be described as “utterly without logic”.  Here is an example:

“I love the Pirate Ship!”

“I had a pirate birthday party once.”

“My half birthday is on Independence Day.”

“What day is Independence Day?”

“I loved the hamster ball on the 4th of July.”

This will generally lead to an inventory of pet names from all participants.

Do not get me wrong.  I actually find these gatherings wonderful, but you cannot come with a hard agenda – the spills and the tangents will win in the end.

But today, I was struck by how appreciative these two cabins were.  When they got their slushees, they thanked me as if I had granted them their perfect birthday wish.  When we entered the Man Cave, they gushed about the room and how comfortable the blankets are.  I will not share all the comments from when we gave them Oreos and Doritos, but the words “this is the best EVER” and “you are a true Champion Steve Sir” did come up.

During the sharing portion, I asked them what they liked about camp.  The almost universal answer was “everything”.  Several went out of their way to say thank you as we ended.

I always love this age group, but I have not seen 2 cabins this thankful.

It then occurred to me – perhaps they actually heard what we talked about in Vespers.  I extolled them to be thankful to their counselors and their friends.  I asked them to think about the people that love them enough to share the gift of camp.  I challenged them to show gratitude for their many gifts.

And the next day, they were exactly that way.

I have to be honest with you, I deeply hope that campers hear what we tell them, but I do not actually expect the young ones to absorb everything.  For them, camp (and life) is an in-the-moment experience rather than an in-their-head experience.  Generally, they are not as advanced cognitively as the older campers, so you hope they absorb snippets and move on.

Yet here they were being simply lovely and modeling the exact behavior we talked about last night.

I also had a young Aquanaut cabin with boys that had just finished 6th grade.  Here is what one of those young men said:

“One of my favorite parts of camp is the fact that it is the only place I know where I can tell other guys that I love them.  At school and other places, people will make fun of you if you say that, but I know I can say it to everyone in this cabin and know that they believe me and that they love me too.”

I find this remarkable coming from a 12 year-old.

Of course, the sessions were not perfect.  One cabin managed to spill 5 (count them – 5) slushees.  The blankets are wet and sticky.  Grind in some Dorito and Oreo crumbs and you are looking at a surface that is not all that appealing.  We lost a few Lego pieces (despite several requests to make sure that all the pieces were in the kits.

But none of that outweighed the positivity of the campers.  So, in the spirit of my Man Cavers, I want to share my appreciation for our campers.  It is a lovely day.

PS  We had another scheduled “Rain Period” from 9:10-11:00.  This is the time that we have created to assure cabins have rest and bonding time.  When it really rains, campers spend time in the cabins making forts, playing cards and telling stories.  Since we have not been getting a lot of rain, we have scheduled times for invisible rain.

Note – as soon as the invisible rain ended, we got 30 minutes of real rain.  Confusing.