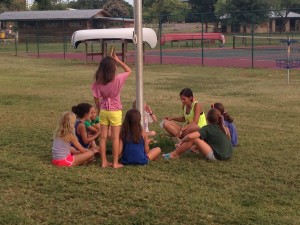 Cute pic - has nothing to do with blog

It took ten years.  Some said it would never happen, yet it did.

This occurrence is rarer than a total solar eclipse or a Dallas Cowboy playoff victory or a quality movie from Michael Bay.

Frankly, I debated whether to write about this.  After all, you want to hear about your children, not mine.  I do not want to be the myopic parent that assumes that everyone wants to know about me and mine.

I am also reluctant to write about this because I think it can suggest that being torchlighter is more important than it actually is.  It was somewhat important to Liam because his twin had received it, but we can easily over-emphasize it.

But Susie Ma’am suggested that there are some useful lessons in this unexpected occurrence that I should share.

And I ALWAYS listen to Susie Ma’am.

First, it is a reminder that being a torchlighter is much less important to campers than parents sometimes assume.  Liam loves camp.  Sure, there are moments that he wanted to be a torchlighter, but he loved camp independent of that.  We have focused a lot of energy on celebrating the torchlighter for 5 minutes and then redirecting the attention to the entire community.

Second, it became a teachable moment.  When he would say “I wish I were a torchlighter” (which he would on occasion), we chose to respond “who in your cabin and division did get it?  Did they do anything you did not do?”  In Liam’s case, the answer was usually staggeringly blunt “well, he was always nice to everyone and I got into a few arguments with some other guys . . . a LOT” or “he was helpful to the counselors, I kinda resisted at times”.  Ultimately, his greatest challenge was being a consistently good cabinmate.  He would have days where he was much more focused on having fun and hanging out than having responsibilities and helping out.

Third, I love seeing campers get torchlighter after 5, 7 or 10 years.  Our children (yours and mine) have been raised in the shadow of the self-esteem movement where every mini-triumph is celebrated and perseverance is less emphasized.  Knowing that some things might take many years of effort is a great lesson for children to get.  The truly great gifts of life generally require many years of sustained effort: college, marriages, building a career and – most importantly – raising children.  The noble endeavors are not like microwave meals; they take time and consistent effort.

Fourth, having campers wait 10 years helps reduce parents’ stress if their child does not get it by year 3, 4 or 5.

Of course, some campers are perfectly happy never worrying about it.  Seven years ago, one of the members of our Leadership Team (and one of the best counselors I’ve ever worked with) said that she knew she would not be a torchlighter.  “I was pretty hard-headed and I could be bossy.  But my cabin loved me and I loved them.  I, however, did not always make the cabin easier.  It would have taken too much effort to do what I needed to do to be a torchlighter.”  Once she was a Senior Camper, the same energy and head-strong tendencies made her a wonderful cabin leader to 8 year-old girls.  Her strengths were now truly strengths and she – like Liam – was first recognized as a high schooler after 9 or 10 years. This summer during orientation, a 13 year camper and senior camper was recognized for the first time as a counselor.

I feel I should also share a quick story from a 7 year camper who loves camp (and we adore him).  He was asking about SCOPES.  SCOPES are the daily report on each cabin and every camper.  In them, the counselors report on the behavior and emotional comfort of every camper (along with comments).  They also share thoughts on the previous nightly ritual as well as the strengths and challenges of the cabin.  Finally, this is where they first nominate torchlighters (starting an elaborate vetting process).

Our 7 year camper then stopped the counselor, “Wait YOU are the one that nominates?  But, I have been sucking up to Leadership all these years and misbehaving in the cabin.  Wow, looks like the wrong strategy, eh?”

As long as I am talking about SCOPES, I wanted to share one from a Rookie cabin.  Here are the entries:

Cabin Successes:  They show fantastic teamwork – pulling together as a group consistently.

Cabin Challenges:  Unfortunately, they use teamwork to form a mutiny against authority . . .