Sundays at camp feature a different schedule and special activities. 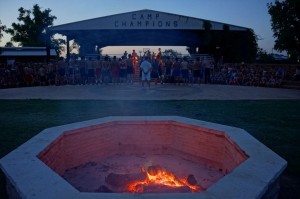 We sleep in an extra hour.  Our dinner is a picnic. Campers have “Free Play” in the afternoon: a chance to play a favorite game, work on a project or just hang out with friends.   The boys can play in a 3-on-3 basketball tournament.

But the biggest difference is Trojan-Spartan games and Vespers.

Trojan-Spartan games have been around every year since our founding in 1967.  Every camper becomes a member of the Trojan or a Spartan team and will remain with his or her team for life.  Last night, our newest campers had their Initiation into their new teams.  [Note: the boys’ side of camp take their initiation very seriously and they decided that flash photography hampers the mood of the ceremony, hence you will see lots of photos from the girls’ initiation but few from the boys’.  The picture attached to this article was smuggled out to give you a little flavor of the event on the boys’ side.]

Before and after the initiation, we make sure the campers hear several messages.  First, we want them to know that they are part of our longest tradition.  Second, I want to know that once they are part of a tribe, they are truly Champions campers and no longer “new” campers.  Third, both teams are equally awesome, so do not worry about where you end up.  Fourth, we value sportsmanship in our competitions.  Finally, once the games are over, we are not Trojans or Spartans; but are instead friends, cabinmates and Champions once again.

Today, you would have been proud of your Trojan or Spartan.  We had a spirited and lively competition.  The boys participated in 7 activities, travelling from one area to the next by age.  Here are the activities:
• Gaga (best version of dodge every)
• Team-walk (all campers stand on 2 4x4 board and have to talk as a team)
• Glob (how many campers can balance on a soap-covered glob)
• Lily-pad relay (a relay race in water)
• Bombardmant (team dodge ball)
• Steal the bacon (hard to describe, but it involves two campers trying to grab a bandana without getting caught)
• Blind-folded maze (one maze-walker is led by his team)
The girls were overachievers and had 11 events, though each camper only participated in 6-7:
• Cheer-off
• Jello eat
• Trash can relay
• Oatmeal dig
• Water balloon toss
• Musical water buckets
• Steal the bacon
• Bombardment
• Crazy obstacle course
• Balloon stomp
• Senior Camper tug-o-war

I am getting tired simply writing all that down, but the campers had a blast.

We announced the winning team at the camp-wide picnic.  Today, the winner was the Trojans in a very close battle (36-35).  After a brief celebration, we then moved on to our evening event – Vespers.

Vespers is one of my favorite times at camp because we get a chance to celebrate our community and reflect on the week.  I know this sounds solemn, but let me assure you that two decades of camp have taught is that young campers only have so much reflection in them, so the entire gathering is generally less than half an hour.

But it is an important half hour.  We gather around separate campfires, with the girls on their sailpoint and the boys on theirs. We wear white shirts.  The shirts are not symbolic of anything really, but they are used just to set the experience apart from the rest of the week.  Sometimes, an inside-out camp uniform shirt is the closest we have to a white shirt, but that works just fine.

Susie Ma’am leads girls’ vespers.  She chose to talk about failure.  Specifically, her message is that successful people fail.  They are willing to try new things and take risks.  When their efforts do not work (they fail), these individuals bounce back higher and more determined.  Failure is also educational – teaching us the wrong way to do something.  She told them that “failure is education”.

She suggested that camp is a wonderful place to try new things, stretch yourself and – yes – fail.  But camp is also a place where you find your inner resilience, try again and develop persistence.

After the talk, she had over a dozen girls gleefully tell her, “I am ready to fail tomorrow!”

On the guys’ side, we talked about appreciation.  We did Grateful Deeds, where campers publicly acknowledge acts of kindness in others.

I told them the Tiger Story about how each of us is a powerful and unique tiger that is capable of extraordinary things (I will share the story with you in a later blog).

I than asked the boys to do something challenging – be silent for 2 minutes.  During that time, I asked them to listen to the sounds, feel the breeze, watch the sunset and think about all the wonderful things in their life.  We encouraged them to appreciate the families that love them enough to share the gift of camp, cabinmates that are fun and willing to play, and counselors that are awesome and supportive.

We all have so much to be appreciative about.  I think it is wonderful when we take the time to do so.

Also, being with almost 200 boys and men sitting in silence together is a pretty cool experience.  Susie similarly loves her time with the girls as they all stare into the fire and share.

After Vespers, all the campers got Sunday Sundaes (ice cream with multiple possible toppings) as a special treat to celebrate our first full week together.

We now go happily into our next week together.  I love the second week.  Everyone understands the rhythms of camp and knows our traditions.  The first year campers are no longer “new” campers and camp feels like a family.

Perhaps a very loud and chaotic family, but a family nonetheless!