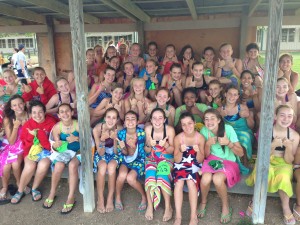 We are done with the Lake Swims and the kilometer swims.

Each camper gets a chance to embrace a grand swim challenge.  One of the original founders of the camp, Hondo Crouch, started the Lake Swim in 1967.  Hondo was a fascinating man.  He was an all-American swimmer at the University of Texas and he brought his passion for swimming to camp.  He was also a true character.  He would have been the kind of counselor that any boy would love to have and any parent would worry about.  For example, I have met at least 10 people who have said, “Hondo taught me to chew tobacco.”

My heart stops at the idea.

But he was also a great humorist and story teller.  Willie Nelson and Jerry Jeff Walker have written songs about him.  The founder of Luckenbach, Texas, he could mesmerize a room with his tales and images.

When he created the Lake Swim, all campers of all ages swam across Lake LBJ and back (roughly 700-750 meters).   We have since determined that it is a bit much for an 8-year old, but the tradition continues for the Maxis and Aquanauts.  We wake them early (6AM), line the lake with kayaks and lifeguards and swim.  The fastest times are usually around 15 minutes and the final swimmers finished this year around 40-41 minutes.

For the Midis and Letterman (roughly ages 10-12/13), they swim a full kilometer in the boys’ swimbay (10 laps or 20 lengths).  It is a bit of a challenge because the lake is choppy and the length of the laps (50 meters) is not short.  It is easier than the Lake Swim because it allows for rests, but it is still quite an accomplishment.

The youngest campers (the Minis and Rookies) attempt to swim a kilometer in the pool: 20 laps or 40 lengths.  This challenge fits them because the water is clearer, smoother and the laps shorter.

Not every camper finishes the swim.  We, after all, believe in challenge-by-choice, but we encourage them to try their best.  When they find the task a bit too much, we are sure to frame their efforts in terms of their own circumstances.  For a camper who is a reluctant swimmer, swimming just half a kilometer in the lake is certainly a bigger accomplishment than a full kilometer for a camper on her home swim team.

It is a challenge to find the right balance between encouraging the camper to strive beyond his comfort zone and pushing too hard, but we have become skilled at doing so.  Each year, I watch dozens of campers who KNEW that they were incapable of swimming their kilometer (or the Lake Swim) only to see their triumphant faces arrive at the end of the swim.

At its best, camp expands a camper’s sense of his/her own capability.  They leave with an expanded sense of their ability, which then leads them to embrace other “reasonable risks” at camp and at home.

Note from the Rookies

Tonight, the Rookies are having an adventure.

Tonight is Rookie overnight.  The boys ate drumsticks, corn, mashed potatoes . . . caveman style.  Some people might say that mashed potatoes are not finger food.  They would be wrong.

Alex Pratt, the Division Leader, decided to run a division-wide edition of Grateful Deeds.  It was heartfelt and occasionally amusing.

A few of the youngest campers raised their hands to thank themselves for acts they did for others.  I guess that counts . . .

“I want to thank [camper name] Sir for whatever he did.  I cannot remember what he did, but whatever it was, it was GREAT.”

One camper in the middle of the grateful deeds (after Rookie Torchlight and announcement - at least 45 minutes) jumped to his feet, looked left and right and queried, “Hey, where are the Senior Campers?”  Note, the Senior Campers had never been there.  I wonder what made that fact suddenly apparent.  Further, why the exclamation?  Nature has few mysteries that match the mind of a 7-9 year old.

Last observation.  Ask 10 Rookies how to make a s’more, and you will get 12 answers.  Each, however, is delicious.