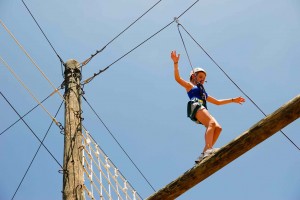 Over the course of our careers as camp professionals and as parents, Susie Ma’am and I have become somewhat obsessed with learning about youth development and helping every child realize his or her potential.  Because we have the pleasure of working with so many children and families, we have an opportunity to see a wide swath of educational and parenting strategies.

The good news is that we have learned a lot.  We have then taking what we learn and modified our camp program and philosophy to focus on growth opportunities for our campers.  The bad news is that we still have a lot to learn.

18 months ago, my brother JJ sent me a link to an article from the New York Times entitled “What If The Secret to Success is Failure?” (a precursor to Paul Tough’s book “How Children Succeed”). It chronicles the work of an odd array of individuals: the headmaster of a upper-class private NY school, one of the founders of the KIPP schools that serve low income minority students, Martin Seligman (the founder of the field of Positive Psychology) and a highly motivated graduate student.  They wanted to understand how to make schools better and increase student performance, not just in school but after graduation.

The article is long and I will not summarize it all here.  Instead, I would like to share a few observations that intrigued me.  They started by looking at the graduates of KIPP middle school and seeing who was graduating from college years later.  They saw that 33% of KIPP middle school graduates were graduating from a 4-year college.  While this was 4 times better than their socio-economic peer group and higher than the national average of 31%, they wanted to increase it further.  They noted that the eventual graduates were not always the best students.  Instead, they were the ones that showed the ability to bounce back from challenges like bad tests or family travails.  The NY headmaster also noted that the students with perfect grades at his school often cratered at the first sign of true adversity.

Both educators began to notice the importance of resilience, struggle and perseverance.  Psychologist Wendy Mogul has written extensively about this phenomenon in her books “Blessing of a Skinned Knee” and “Blessing of a B Minus”.  We need more resilience and less perfection.

They began to see education reform as more than just changing the schools, but also changing the students.  They became interested in Character as well as classes.

The graduate student on this team created a theory about the importance of character; perseverance and resilience in particular.  She boiled it down to a single word – grit.  She created a 12 question Grit Index that takes only 3 minutes to take.  It relies entirely on self-reporting (rather than any objective measures), yet it proved to be quite accurate.  In fact, it predicted the performance of West Point cadets more accurately than the elaborate system of tests and measures the US Army had developed over decades.  This particular point shocked me.  Her simple measure is clearly onto something.

Let me modify my last comment.  I was shocked that the tool was good, but I am not shocked by the idea that character and grit are critical to success.  I worry that many of our institutions (especially schools) are less focused on these characteristics than getting better test scores.  Often parents add to this problem.  If a child gets a bad grade on a mediocre paper, parents are often tempted to lobby the teacher for a better grade or to help the child write the next one.  This can improve today’s grade, but what does it do for tomorrow’s challenge?

I have told people that camp might be more important to a child’s development than school.  I believe this because we at camp are focusing our efforts on the very areas that the schools are not.  Sure, camp is a blast, but it is also a rare opportunity for true character reinforcement.  Since it is an immersive environment, we can create an entire culture so that we maximize individual growth.  The 4 Rs (Respect Responsibility, Reaching out to others and taking Reasonable Risks) help hone character.  Susie and I also talk about the “5th R” or Resilience.  These are gifts that aid in personal development and success.

As I read the article, I was excitedly reading aloud sections to Susie Ma’am (I know – I am one fun guy to hang with).  While I was reading, Wiley Sir (one of our teenage sons) responded in true Wiley fashion: “that is awesome Daddy, is there a way to get grit without trying too hard?”

I hope we are developing grit in our children.   It was one of our primary goals of our backpacking trip through Europe, Asia and New Zealand during the 2011-2012 academic year.  At the very least, I am confident that the kids did not get less gritty.

Before I conclude, I would like to share is a paragraph from the article that should be quite encouraging to camp parents:

“Cohen and Fierst [employees of the high-end private school] told me that they also see many Riverdale parents who, while pushing their children to excel, also inadvertently shield them from exactly the kind of experience that can lead to character growth. As Fierst put it: “Our kids don’t put up with a lot of suffering. They don’t have a threshold for it. They’re protected against it quite a bit. And when they do get uncomfortable, we hear from their parents. We try to talk to parents about having to sort of make it O.K. for there to be challenge, because that’s where learning happens.”

Camp is a place where campers get the rare opportunity to face problems on their own and to experience uncomfortable situations while in a loving environment.  The first part (uncomfortable situations) is critical to character development, but the second part (loving environment) is critical to assuring the campers that they are OK.  Campers stretch themselves at camp.  Heck, just living without parents for 2 to 3 weeks is a big step.  Camp is an odd creature – it allows kids to build resilience away from the family while still being safe.  But they still grow.  This is a nice – and rare – combination.