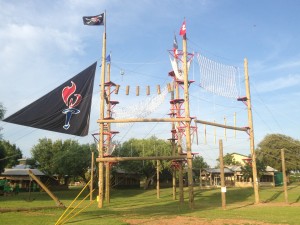 One of the things I love about camp is the chance to make it better every year.  Each summer, we conduct this wonderful experiment creating a camp community.  For the 9 months we are not running camp, we are searching for ways to make camp even more fun and even more impactful.

Let me give you a few examples.

The Spin Cycle
As I have mentioned before, Susie Ma’am and I took our four kiddos on a 22 week trip during the 2011-2012 academic year.  During this odyssey, we saw many things that we would bring back to camp.  [Note: we did not bring back two of our favorite experiences, petting full-grown tigers or riding on Asian elephants.  I know – where is our sense of fun?]

The one idea that we were most excited about came from Budapest, Hungary.  Budapest has several public baths (essentially huge public swimming areas) and we visited one while there.  It had three massive pools – each measuring roughly an acre – and several playful elements like fountains, jets and waterfalls.  But one feature in particular captured our attention.  In the middle of one of the large pools, they had a circle measuring 33 feet in diameter.  Inside this circle was another smaller one measuring 12 feet.  This inner circle was a seating area where roughly 20-30 people sat chatting.  The outer circle formed a loop that initially did not seem to do anything.  No one was in it.

Suddenly, we heard a “beep, beep, beep” sound, the squeal of children (AND adults) and much movement to this outer circle.  We then noticed that the people were going around in a circle at a nice clip.  It seemed like a lazy river that was not all that lazy – lets call it a “highly motivated river”.

We decided at that moment that we wanted to have one here at Camp Champions.

We showed Moak Sir some drawings and a few terrible photos.  We realized that we were missing some details, so we asked George Sir (our amazing Letterman Division Leader) to check it out when he was Budapest 6 months later.

Moak Sir then had an idea.  Why make the middle area a sitting zone when we could make it a “vortex pool”?  A vortex pool is a circle that sends directed jets around in a circle, creating a swirling effect.  We decided to do both.

The design is completely original.  We did it ourselves with the help of Crites Pools (our long-time pool building partner).    There is a reason you have never seen one anywhere else.  We including a picture for you on yesterday’s “Daily Update” blog.

The Pirate Ship
Last fall, 5 of us went to North Carolina to tour multiple camps in that area.  We toured 8 different camps and saw tons of wonderful facilities.

At one, we saw an amazing ropes course.  We admired it for almost half an hour and then started to move on.  As we were roughly 150 feet away, we saw the top of the ropes course through some trees. From this vantage point, it looked like a pirate ship.  At that moment, an idea occurred to us – we should have a pirate ship!

We came home and challenge our team and our ropes course builder to design a multi-level, multi-element ropes course that would look like a pirate ship.

In every Friendship Circle and Man Cave, we heard campers rave about the Pirate Ship!  It is a joy to see such a clear success.  The attached picture is the Pirate Ship.

The Tiger Club
The Tiger Club recognizes an important fact about camp – finding wonderful families is a key component in creating a wonderful community.

We can build cool stuff like the Pirate Ship and the Spin Cycle.  We can hire fantastic counselors and spend two weeks training them.  We can modify the schedule and add new traditions.

But a great camp community is made up of great campers.  We have found that some of the most positive and excited campers are friends of existing camper families.  Campers and parents who appreciate camp recommend it to their friends, making our community even better.

While we have always deeply appreciated these families, we decided we wanted to find a formal way to say “thank you”.  The Tiger Club is one of the ways we are thanking them.  If a camper brought a friend to camp, they are in the Tiger Club.  Today, we had our Tiger Club reception (ice cream sandwiches at the OCP during Treat Time) for them and the campers they referred.  The reception was short – just 15 minutes – and they were off to their afternoon activities.  But we loved the chance to simply say thank you!

PS  I just got back from the dance and I can report on yet another new improvement that I love – the “Robbie”.  Robbie Sir is one of our directors and a guy with a wonderful sense of fun.  He noticed that some campers have little to no interest in the dance and even less interest in finding someone to dance with.  He has created a wonderful solution.  During Flag Raising, he is teaching “dance moves”.  I put “dance moves” in quotes because he is intentionally bad.  Fist pumps, jumping jacks, the side-to-side shuffle, the lawn mower pull – these are all demonstrated in all seriousness every morning.  Worried about the slow dances?  Worry not.  Go with interpretive dance alone.

At the dance, he grabs one corner of the Parthenon (the boys covered gym) and basically leads groups of 25-50 in these unpretentious, silly dances.  The campers love it.  Heck, I love it too.  The shy campers are now laughing, smiling, “dancing” and having fun.