The last 5 days have been a bit of a head-bender for me. 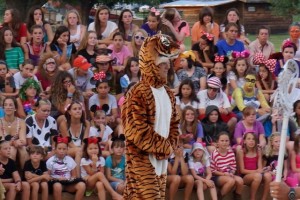 Over the weekend, I attended my 20th HBS reunion in Boston.  I only had 48 hours between the end of orientation and the start of Opening Day and I had initially decided to pass on the event.  After all, it sounded like a fool’s errand: 2 3AM wake-up calls over 3 days and lots of plane time.  Also, since camp had started, I (like our counselors) had pledged to not drink during the summer.  Of course, this is not generally a big deal, but these events are a lot like weddings - lots of celebrating.  Being the guy sipping sparkling water would seem a tad bit strange.

So I was inclined to pass on the trip.

But then Susie Ma’am reminded me that I have always enjoyed many of these people and should make an effort to reconnect.  One of the organizers then asked me to do a 10-minute talk about parenting (apparently, camp directors are rarer than hedge fund managers).

So I went, reconnected with friends and gave my talk (entitled “Saving Our Children from Ourselves: Raising Children in the Shadow of Overachievement”).  It was an odd experience.  The conversations of previous reunions had all been about jobs and income.  Suddenly, everyone wanted to talk about children, travel, parenting and friends.  Not exactly the topics one associates with Harvard.

But I think these are the conversations that truly matter.

So, fast-forward 2000 miles and 12 hours later.  Suddenly, my coat and tie became shorts and polo.  The cool rain of Boston was now a clear, warm Texas day.  Rather than ivy-covered walls, I stared at a Pirate Ship and swimming pools.

But the conversations were still about children, travel, parenting and friends.  At least the important things did not change.

I was also happy to realize that our camp parents are generally doing a better job than many of my classmates.

In my talk, I discussed 3 areas where overachieving parents create challenge for their children: 1) excess parenting (not allowing children to fight their own battles), 2) competitive parenting (feeling a need to over-schedule children because everyone else is doing the same thing) and 3) choosing the wrong narratives to share with our children (success is the school you attend or the job you get rather than lives you touch).   I told the audience that I had learned so much from observing wise and committed camp parents.  Getting a chance to study so many styles of parenting has been very informative and exciting.  I am lucky to have an opportunity to partner with so many great families.  [Note: HBS will be sending the video in 3 weeks, so I will share it then for anyone interested.]

The transformation from serious to silly was completed last night as I spent an entire camp dance dressed as a tiger (see picture).  I cannot think of anything farther away from Cambridge/Boston.

I had a wonderful time, but the trip only reiterated for me that I truly love this life and the opportunity to work with children.  And I cannot complain about the freedom to wear tiger outfits too!