Back In the USA (they might send us back)

[I JUST REALIZED THAT WE NEVER POSTED THIS ONE.  SO HERE IT IS, 3 MONTHS LATE.]

We are back in the states.  To be clear, we are not home.  Instead, we are in a 7 hour layover in Los Angeles airport having already taken 2 flights and been up for 23 hours.  We are a perky and happy lot.

OK, perhaps not perky or happy, but we have had some tales to share.

We started enthusiastic enough.  We took the pedals from Susie’s Valentine’s flower and tossed them from our window at sunrise. 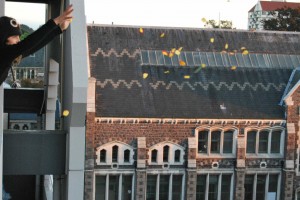 The sweet girls from the dance studio drove to the airport to see us off.  I was delighted to find out that they live relatively close to the airport.  I found coming to an airport at 8AM on a Saturday almost too generous an effort. 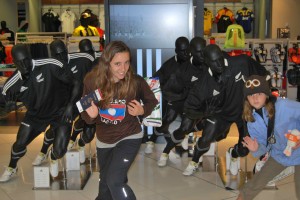 And then there was the flight.

Virginia, our most sleep-dependent child, managed to stay awake on the trans-Pacific flight despite taking a Benadryl to clear her ears.   You might think that we will be reaping the benefits of this herculean feat for many hours to come.  You would be right.  But the fun has already started.  A stalwart traveller with a rock-solid stomach, she nonetheless managed to throw up a remarkable amount, covering the bathroom in the plane.  I felt sufficiently bad that I volunteered to clean it up.  The flight attendants did nothing to discourage me.

The fine folks from Quantas kept feeding us.  Nothing fancy, but the offerings were frequent and filling (until, as noted for Virginia, they became unfilling).  We had a dinner, breakfast, sandwich role, apple, cake, cheese + crackers and 6 different drink services.  While generous, this avalanche of foodstuffs helped assure that many of us never really slept.  Just as we started to nod off . . . bam! . . . another snack.

One snack did not get consumed.  An apple purchased in New Zealand (ironically, grown in the US) was in Susie’s backpack.  She was aware of this, especially after we were stopped entering New Zealand with food 3 weeks ago.

[Note: I am not sure if I adequately described this before, but here it is in short.  We arrive and throw away all our snacks/candy/food in the bins provided in compliance with their quarantine warnings.  An adorable beagle came up to our bags with an enthusiasm usually reserved for tween girls at a Justin Beiber concert.   He sniffs and forages and finds a moldy muffin that had laid dormant for 4 weeks in one of our backpacks.  Actually, “laying dormant” is highly inaccurate.  Let us instead say “incubating life”.  The New Zealand woman was amused and let us off with no real issues.]

Anyway, we were sensitized to bringing food into a country.  When we landed, Susie remembered the apple and decided to eat it prior to clearing passport control or customs with the intention of tossing it into available bins.

No bins were available.  We asked a guard what to do, she said there would be trash cans near customs.  We double-checked with the passport security guard and he told us to take our time eating it “no need to choke.”

At customs, Virginia was holding the eaten core like a rotten fish and looking for the trash.  Upon seeing it, we earned a trip to “Aisle A”, which entailed an extra scan of all our baggage (much appreciated given our frayed nerves) and treatment akin to what I would hope a real smuggler would get.  We did learn that the apple core made us eligible for a $300 fine.  The agent “waived” the fine as if she had sprung us from the Big House.  I suspect we did not look as appreciative as she might have hoped.

As you might guess, this first-blog-from-America is not rife with insight.  I had hoped that the muses would visit me and inspire deep insights into life, wealth, culture, family and life.

I am rolling snake-eyes on that goal.  This is all I’ve got right now.  But at least I am doing something – here is the rest of the crew. 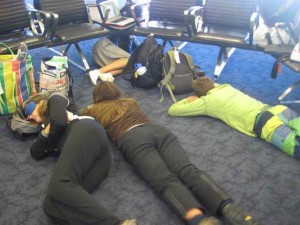