We are happy to report that New Zealand is not perfect.

Terrill wonders why Susie and I feel this way.  It is because we love Texas and do not want to move.  Yet, this is a special place with lovely people.  We have daydreamed about living here.

We also perhaps have enjoyed a slightly false impression of the country.

Our prior two visits seem to have been meteorological aberrations.  The weather was warm, if not occasionally hot.  The skies were clear.  It rarely rained (perhaps 3 days out of 47).  Yet the place is green and lush.

That last bit should have been a clue.  Generally, places that are green get lots of rain.  I was so busy enjoying the scenery that I never really pieced together that it needs lots of rain to be so verdant.

We also have only been here in their summer, with festivals and long, long days.  That means that the winters would be like Scotland or England with grey and short days.

The last couple of days have helped us temper our unbridled enthusiasm.

As a result, we have been not gone to the Botanical Gardens or walked the city.  Instead, we have restricted our activities to indoors.  Here are some pictures from the travels.

One of the best museums in the world is in Wellington, the Te Papa.  It is interesting from the outside 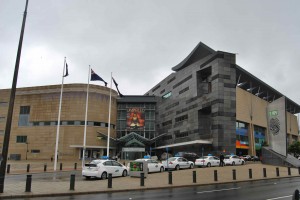 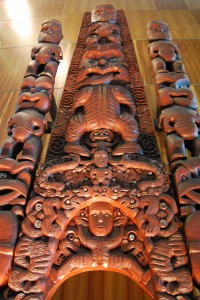 This has the most substantial collection of Maori history and items.  That might sound dry, but it is not.

They also have a fantastic section on earthquakes and other natural disasters.  As the tragic Christchurch earthquake recently emphasized, this country is on a major fault-line.  The South island widens each year about roughly the same rate that a human child grows.  That is a lot of geological pressure.  Here is a photo from an earthquake in the 1980s. 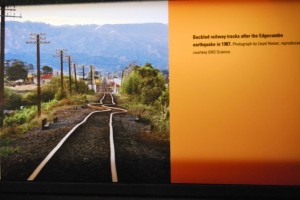 They describe the flora and fauna both current and past.  Here is a picture of two extinct animals: the moa and giant eagle. 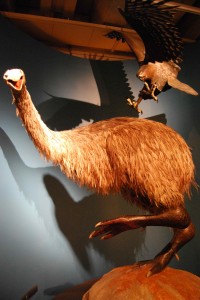 The moa was huge, slow and stupid, but it only had one natural predator, this eagle.  New Zealand never had any mammal predators.  The possums, stokes and cats came with the Europeans and have really hurt the flightless bird population.  The moa, however, was wiped out by another mammal - humans.  The Maoris came around 800 and saw these birds as walking feasts.  Within 2 centuries, the moa was gone.  The giant eagle disappeared with it.

[Note: one of my favorite Kiwi stories concerns introduced mammals and native animals.  In 2003, Susie and I met a female vicar from England who had attended a hangi (a Maori luau) with a group of eco-tourists.  As the Maori were preparing a feast inside, a possum appeared outside.  These tourists clearly had not read anything about the devastation hunting mammals have done to the unique bird population here because they were gawking over the possum and admiring it, “ah, the beauty of nature - look at how cute it is!”

At this moment, a Maori emerges from the inner building wielding a 12 inch Maglite (metal flashlight) and pummels the animal in two decisive strokes.  The vicar recounted the event thus (hear it with a lovely BBC accent), “I knew the possum to be a menace, but had I killed it or even touched it, my companions would have regarded me as an ugly European who destroys nature.  But this was the Maori - a native people - who the tourists saw as ‘good’ and ‘close to the Earth’.  They were terrible conflicted ‘possum good, but Maori good’.  The use of a Maglite rather than a traditional Maori club only made it more confusing for them.  They asked whether they should bury the possum.  The Maori looked at them as if they have asked to bury a mosquito.  Delightful.”

I love this story.]

We went to a gastro-pub next to the Te Papa that had great food and some games.  Not much to share here except the huge mussels 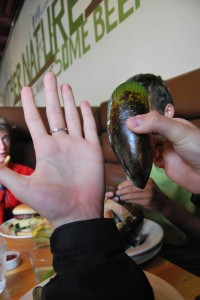 and played some wickedly competitive jenga. 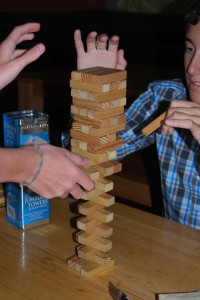 We found another sign that clearly has a story behind it.  I think it speaks for itself. 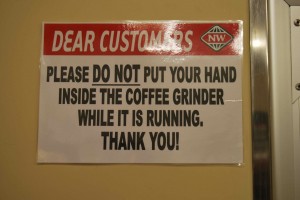