Susie has a fan beyond our family.

I failed to mention the fact that a 20-something German man approached Susie during the glacier hike.

Susie is so sweet and a fan of Europeans.  She was delighted to chat with the young man.

I am a guy and understood that he was hitting on her.  I am sure he did not know she was married.  The warm attire hid any ring and we were walking separately.  I have no idea if he knew whether she had more than one child, but that did not seem to deter him.

She insists that I am wrong.   Let me assure you that I am right.  I must also admit that I was thrilled that a 26 year old would try to pick up Susie.

9 years ago, I chose to jump 140 feet into a river with only a bizarre rubber band supporting me.

I did this because I was scared of heights.  Like Susie in helicopters, I felt a need to overcome a fear so that I could better connect with campers that were scared.

Susie, on the other hand, felt no such compulsion.

At least not yet.

Over the next several years, she realized that we regretted not taking the jump with me.  She led a Vespers talks at camp that talked about regret and not living a life of fear.  She promised the girl campers that if she ever returned to New Zealand, she would jump too.

She also told our kids that if each of them eligible to jump did so, she would jump too.

Three years ago, she regretted making this pledge as she stood on the ledge.  Yet, to my delight and admiration, she jumped on the first chance and was delighted she did so.

While we were there, we set or copied 2 records.  Terrill, at age 10, tied the record for youngest jumper.  Many 10 year-olds have jumped, so Terrill essentially tied many others.

Wiley truly set a record.  The minimum weight to jump is 35 kilograms, or 77 pounds. 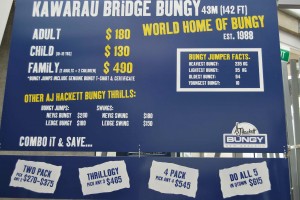 We, with the help of Michael Moak, equipped him with a harness including 3 lead rods that made him look like the Unabomber.  Here is the shot.  Wiley jumped and loved it.  [Note: we tested the harness multiple times to assure that it was safe.  One of the benefits of having a summer camp is access to really good equipment.] 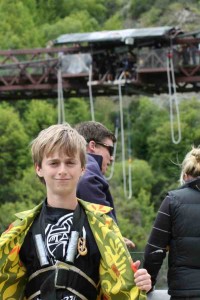 Today, Virginia joined the ranks.  We were so proud of her.  She had no delay at all and jumped.  Terrill, Liam and Wiley all jumped readily.  We decided to jump in our Nepalese wool animal hats, with Virginia as an owl. 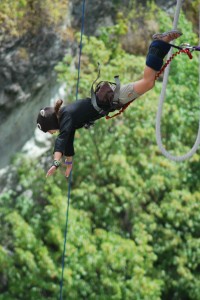 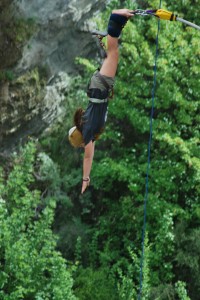 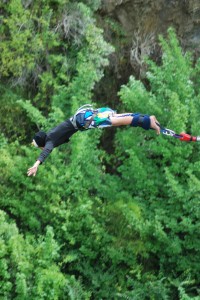 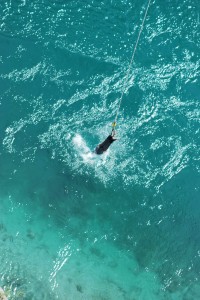 Susie as a crab and me as a tiger.

Meanwhile, Susie and I decided to do something different.  She jumped 3 years ago.  I had jumped twice (once forward and once – ill-advisedly – backwards).  We decided to do a tandem jump.   This meant that we would be tied together and jump together.

I also wanted to get dunked in the water (as I had the previous 2 jumps).

The girl before us was scared.  No, let me correct myself.  She was terrified.  In the US, we would have let her back out.  In NZ, that does not happen.  After several false jumps, her facilitator pushed her off.

Seeing this happen 10 feet away rattled Susie.  Also, she got worse when we talked about entering the water.  The guide told us to duck our heads before we hit the water.  “You do not want to be looking at the water when you hit it.”

“Why not?” asked a shaky Susie.

“You could get two black eyes.”

I found this statement surprising.  I had hit the water with my face before and did not have any visible damage.  He was describing a worst case scenario.  Given Susie’s dicey state, it induced a veritable freeze.

She declared that she did not want to do and wanted to jump alone.

I marveled at this for several reasons.  First, she is scared of little.  OK, she might have some fears, but when she chooses to face them, she does so with gusto.  Second, she had done this perfectly before.  Third, she was the first to approve the tandem idea.  Finally, she had just seen how they dealt with reluctant jumpers (throw them rather than indulge them), so I do not know what she hoped to accomplish.

I will not detail all the conversation nor list the different individual protestations she made to the guide (she was reasoned and articulate though she was on the verge of panic). 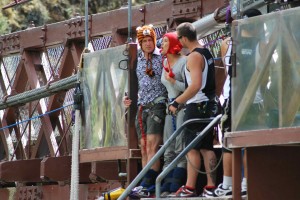 I will say that we took more than the usual amount of time to jump.  I will also report that the entire conversation is delightfully recorded on the videotape we bought, so anyone who visits us needs to ask to see it. 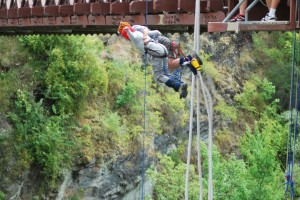