Our children had found a new sports interest: rugby. 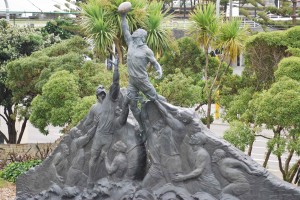 Of course, loving rugby in New Zealand is like getting wet in the ocean.  They are fanatical about their rugby.  As I mentioned before, the All Blacks are the gold standard of rugby excellence.  A drive through the country will include not only flocks of sheep, but also a multitude of All-Black fan flags.

The ecstasy of the World Cup victory remains in land, but this weekend the kiwi rugby fanatics are excited about the “Sevens” tournament.

Usually, rugby has 15 players on each side.  The game is incredibly physical with roughly half of the players resembling American football linemen.  “Sevens” is a different game altogether.  Each side plays only 7 players and the game is about speed more than power.

But the Sevens tournament is not even about rugby.  It is essentially the favorite party weekend for the kiwi faithful.  Picture the Texas-OU game mixed with the Kentucky Derby and Mardi Gras.

All the spectators dress up.  I am not being hyperbolic here.  As you look at the crowd, at least 19 out of every 20 are wearing costumes – many with a group of friends.

We are not at the tournament.  Our plans took us across the Cook Straight from the North Island to the South.  In reality, this is probably a very good thing.  I am not sure the kids needed to see rugby fanatics at their most marinated.

We did get a few hints regarding what we missed.   Last night at the camper park, we discovered a group of almost 20 rugby fans that were, well, singing.  Remember the bachelor party we saw in Rotorua?  These guys were easily as percolated at the celebrants on that occasion.  They did not limit their activity to mere music, but also to enthusiastic and frequent expletive use.

Every so often, someone you love will do something that makes you even more fond of her.  After our revelers had dropped perhaps their 30th “F=bomb” Susie decided to address the situation.  What I so admired was her approach.  Rather that pleading with them or lecturing them, she took a different approach.

She paid them a pleasant and non-judgmental visit, armed with only our camera and Virginia.

She strolled up and engaged them in conversation.  When she approached, many of the guys took of their shirts and flexed for her.  She did not blush or leave, but instead asked them about their day and hometowns. 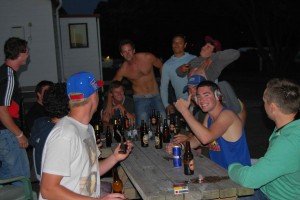 Suddenly, standing there shirtless felt less bold and more foolish, especially with the 10-year old there.  Slowly over the next 2-3 minutes, all the shirts went back on.

She then found the only sober and married man there and chatted for 10 minutes.  During the course of the conversation, she learned that they were in fact 4 separate groups that had become bestest buddies at the park on the eve of the tournament.

The chat also had the effect of letting the air out of their balloon.  They did not stop their language altogether, but mitigated it severely.  Also, having an attractive, but more mature woman in their midst affected their torrent of testosterone much as a consistent mist affects a fire.

Within 45 minutes, a party of great volume had decrescendoed into mild whispers.

During the day, we saw a huge parade that snaked through Wellington featuring all the teams.

I think the pageantry captured the kids, particularly Virginia.  Once it ended, we walked around and kept running into different rugby players form different teams. 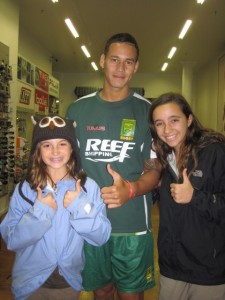 Fiji [having trouble with this shot] 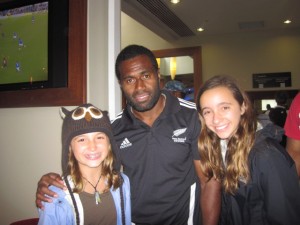 I was amused as she got all these photos, because they must have thought she was a die-hard fan and not a complete neophyte.

But we are becoming fans.  We even found ourselves watching the tournament on the TV as we traveled around.