We are in Christchurch, the scene of the massive earthquake roughly a year ago.  Some estimate that this event created more monetary damage than any previous earthquake.

We are having some trouble processing the disaster.  To be honest, we have not personally witnessed any true disasters.  My grandmother was an infant during the Galveston flood of 1901, but I did not really understand the stories.  We had a tornado in the Marble Falls area 10-12 years ago, but we did not really see the effects of the tornado.

I have seen some floods and droughts, but nothing like the event that grabbed the world’s attention in Christchurch.  I think the important difference is the fact that the massive earthquake was centered incredibly close to a population center.

Even a year later, the majority of the central city is absolutely closed and all estimates are that it will take years, perhaps a decade to recover.

The beautiful Arts Centre is closed.  The epicurean group of restaurants is closed.  The major museum is closed.  The city is struggling. One resident we spoke with talked wistfully of her backyard birds that disappeared for months after each successive earthquakes. (two major and one minor)  She said the silence, after the typical morning chocophany, was the erriest effect of the quake.

Last night we experienced a 5 plus aftershock.  It occurred at 4 am and we were in our campervan. Susie and I both remember being awakened, but as our campervan has horrible shock absorbers, we attributed it at the time to a child thrashing in her/ his sleep.

Despite the massive reparations, even now, we see churches with spires lying next to churches. 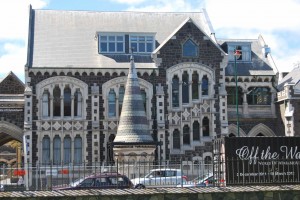 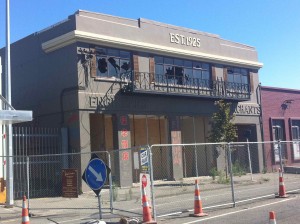 The people are pulling together.  We had a wonderful direct experience today.  Our older daughter Terrill has a pen pal (technically facebook pal)  from a dance studio here.  Her dance school in Marble Falls sent all the proceeds of a recital to a ballet school in Christchurch that was devastated during the earthquake.  The girls still refuse to dance on a second floor.  Their original studio was damaged beyond repair and the new studio they found is just one floor, making everyone happier.  Terrill joined her pen pal (Jess Pugh) and her class during a class today. 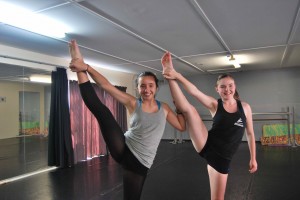 The entire class was so inviting and lovely.  They made Susie, Terrill and Virginia feel completely at home.  They even gave our crew a ride back to our hostel.  They also invited them to come back tomorrow.

Susie was so moved by their emotional generosity.  They are the ones that had a terrible year, but they acted as if Terrill needed their love and support as much as anyone.

Tomorrow is our last full day.  We plan to walk the city and see the beautiful (the gardens) and the devastation.  It is hard to think that the trip is ending, but I think that Christchurch (and its positive populace) is a great place to finish.

PS I also want to leave you with this picture.  It is a group of local students in uniform.  I wonder what our campers would say to this apparel. 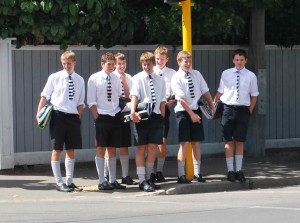