I think I hurt Wellington’s feelings with my comments about the bad weather because it cleared and was cool and clear today.

It is nice to know that we have that type of power.

As a young man, I heard about people obsessed with birds.  At first, I thought it was simply made up, but wise people assured me that ornithologists actually exist.  I marveled at the thought.

It is an irony of life that I have found myself married to one.

My lovely bride likes birds.  I mean she really likes birds.  This is not the passive watching at a distance with binoculars.  No, Susie wants to connect with the feathered fellows.

She feeds ducks and swans. 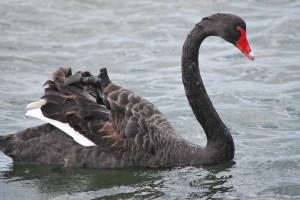 She coos over cranes.  She is eager for egrets. 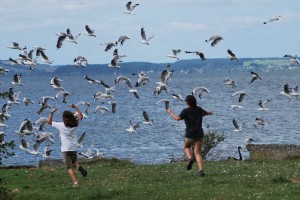 This can change any stroll from a bit of exercise to a study of some random goose.

The Silver Fox once told me “as we get older, we become more.”  By this, she means that our basic tendencies become more exaggerated with age.  If we are quirky, we become even quirkier.  If we are obsessed with ailments, our hypochondria expands.

I was not sure how it would show up in my beautiful bride.  She is moving toward bird-lady territory.

This is a great country for a bird-lady.

We have admired black swans and pukekus outside our campervan.

Today, they started to feed ducks.  OK, the ducks were nice ducks (except for the voracious adolescent ducks that Wiley deemed the “Thug Ducks”), but still just ducks.  When I say we were feeding them, I mean we were feeding them competitively.  Our campervan neighbors wanted the ducks near their van, while Susie wanted them to hang with us.

Virginia had an unexpected answer.  Rather than enter into an escalating food war (each side improving the quality of its food), she chose guerilla warfare.

Virginia grabbed a not-quite-adolescent duckling and watched as the excitement ensured.  The mother would quack and nibble and quack and – wait . . . is that bread? I think I will have a bite . . . and nibble and quack.  She was mildly committed to the protection of her almost adult duckling.  As long as no quality food was in the mix, she was quite focused on Virginia. 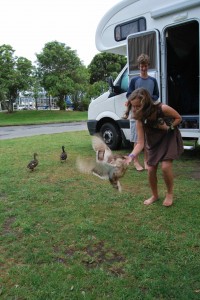 I can assure you it was an amusing sight.

In the morning, we made one last trip to the Te Papa museum.  [Note: how do you know when a museum is well done?  When your 4 children want to return 3 days in a row.  To our credit, we have taken the museum in small bite-sized visits.  Rather than try to do everything and burn the kids out, we have paced ourselves.]

While there, we learned a lot about the effect of non-native animals on the flora and fauna of the New Zealand.  The goes beyond the stoats, possums and cats I mentioned yesterday.  In fact, the museum has a clever interactive exhibit where an alien can choose 4 of 10 different animals or plants to bring to earth for survival.  Some do not thrive on earth, but many proliferate massively and choke out the native life.  The game is fun, but also makes the point about the effect of invasive species.

One of our favorite exhibits is about the world’s largest parrot, the Kakapo.  Like so many New Zealand flightless birds, it had adapted to the habitat of these islands.  By “habitat”, I mean “giant food smorgasbord with no natural predators”.  They were big enough to make a meal for stoats, possums and humans and too slow to avoid capture.

Once quite common, their number in the mid 1990’s dropped to roughly 50, in the world.

The people of New Zealand sprung to action and moved them all to Cook Island, a relatively deserted island with tons of great habitat.  The scientist hoped that the move would inspire excitement and amorous feelings among the birds. 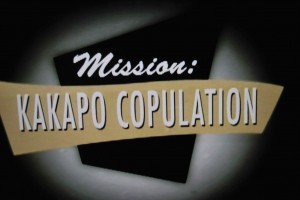 The efforts to facilitate Kakapo copulation range from dedicated to bizarre to “oh, I wish Virginia did not have to see that”.  Lets just say that the Kakapo male wants to mate (human heads, other birds, balled up sweaters), but often seems unable to fertilize the eggs.

I found this hilarious.  My lovely wife (the bird-lady) thought it beautiful.

Yep, she is becoming more.

PS  I am delighted to report that there are almost 300 Kakapo alive now.  The mating efforts, awkward though they may be, have been working.