I debated writing about the Vietnam War.  Many of the wounds are still fresh and well-meaning people have very different opinions on the subject.  My blog has generally been designed to share thoughts on family, travel and culture; not serve as a political commentary.  With this in mind, it seemed wise to avoid the topic.

I, however, must share some thoughts.  Here, I hope to avoid anything political, but instead make observations with appeal to any reader.  If I offend, please know that this is not my intention.

The War Does Not Define Vietnam

My first impression is to marvel at how irrelevant the war seems to be today.  Less than 37 years ago (half a lifetime), North Vietnam was in a vitriolic and ugly war with South Vietnam and the US.  The Viet Cong fought the best-trained army in the world that was armed with superior weapons.  Most never understood entirely why we were involved.  They do know that it was ugly and that they lost loved ones.

Yet today, we Americans walk the streets, eat in restaurants, talk with locals and even sleep in their homes next to the altars of their ancestors.  Our guides talk about the war as if it took place centuries, not decades ago.

Some of this is attributable to the fact that tourists are good for their livelihoods.  That is certainly a factor.  But they could love tourists from Europe and Australia and China and not the US, yet they seem not to differentiate.  [Note: China is probably a bad example.  They have even more contentious history with Vietnam than the US.]

Some of the indifference to the war is generational.  Over half the population was born a decade after the US withdrawal.  Probably less than 15% have distinct, first-hand memories of the conflict.

I suspect that the most important reason is that they simply want to live their lives.  Worrying about the war brings sorrow and produces no food.  For a people that seem to have an optimistic streak in them, this is not a combination that helps at all.  The people of Vietnam want to look forward to a better life ahead.

The Scourge of Agent Orange

Much has been written about the way both sides fought the War.  Critics of the North Vietnamese will point to their cruel traps and guerilla tactics.  Not only might an armed Viet Cong soldier appear suddenly in ambush, he (or she) rarely wore identifying insignia or uniform.  As a result, the important line between “combatant” and “non-combatant” was wiped out.

The Vietnamese created elaborate tunnels that enabled them to essentially disappear in the jungle and reappear suddenly later.  Here are some photos of our tour of the tunnels. 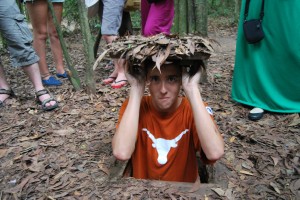 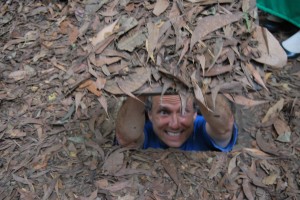 They also set booby traps that were designed to create slow and painful deaths. 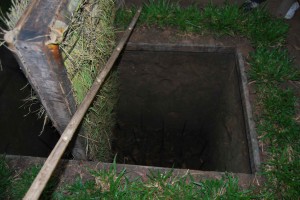 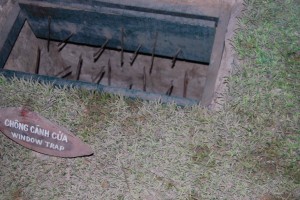 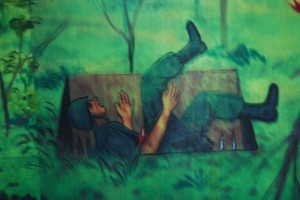 I understand why the North Vietnamese felt a need to resort to deception and cruel, primitive traps.  They could not win in a direct, conventional fight.  But the results are still horrific.

There was no love lost here.

Critics of the US/South Vietnamese tactics point to several massacres (My Lai being the most disturbing) and the widespread use of indiscriminate weaponry.  By “indiscriminate weaponry”, I mean weapons that create great amount of destruction and casualties to both combatants and non-combatants.  These include carpet bombing, napalm and herbicides (like Agent Orange).

I understand why the South Vietnamese and US forces felt a need to resort to these tactics.  Since the line between combatant and non-combatant was blurred, indiscriminate weapons made more sense.  If the enemy is hiding in jungles or being fed from rice patties, raze the jungle/patties with fire or poison the plants with herbicide to take away this advantage.  [Note: When I say I understand some of the tactics of both sides, I am only talking about the tactics. Nothing justifies the atrocities committed by individuals on both sides.  Lt Calley’s actions at My Lai and the frequent abuse of prisoners of war by both armies are never excusable.  War is a place where sociopaths and sadists can flourish.  When war becomes unconventional and soldiers become stressed, the worst of humanity is often laid bare.]

Of all the tactics used by the US, the one I most wish had never happened is the use of Agent Orange and other dioxin-based herbicides.  I am a believer in the basic decency of our nation.  We have had some poor moments (Watergate, Tea Pot Dome scandal, propping up the occasional dictator), but I do not believe that our people or leaders want to commit acts of overt evil.  With this in mind, I see the decision to use Agent Orange as a combination of military desperation combined with an ignorance of the long-term consequences of its use.

Dioxin does more than kill plants.  It also causes a multitude of long-term health issues (including cancer, extreme dermatitis, lung disorders, massive joint pain) and, more horrible, terrible birth defects.  An entire room in the “War Remnants Museum” is dedicated to pictures of children suffering the most ghastly birth defects, ranging from conjoined twins to missing limbs to distorted features to compete mental incapacity.  Tragically, there are still areas that have dioxin in the soil and people with dioxin in their reproductive organs, so children continue to be born with these defects. 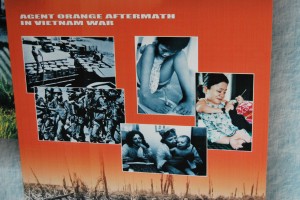 The effects were not limited to the North Vietnamese.  Many US and South Vietnamese veterans suffered as well as did many of their children.  One of the children that served as poster child for the March of Dimes was the son of a soldier exposed to dioxin in the war.

With a crystal ball, I believe that the war leaders would have chosen a different approach to counter the use of jungles as camouflage and fields as food.  But we had no crystal ball and the effects are truly saddening.

A Barrage of Bias

I know I have already written about history and the fact that winners write the histories.  I have recently developed a critical approach to all history, asking “Who wrote this and why?”, “What do they emphasize certain points and why?”, and “What do they leave out and why”.

I was late to discover the malleability of history.  I was in college before I truly appreciated how variable narratives can be or how important they can be.

Our children are learning this lesson much earlier than I.

We saw bias when we visited the “Hanoi Hilton” museum in Hanoi.  We ‘learned’ about the atrocities heaped upon ‘patriotic’ Vietnamese fighters at the hand of the French, but we heard nothing about the mistreatment of certain US pilots as described by John McCain.

Hanoi was not a down-payment on the two museums that we saw in Saigon.  They were so biased that I worry that the children missed important lessons in the sea of Vietnamese spin.

The “War Remnants Museum” was previously the “Museum of War Crimes of American Imperialism and Puppet Government”. 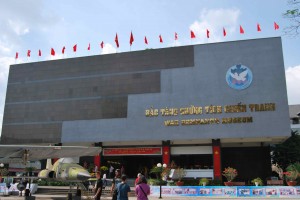 The name changed when Vietnam and the US normalized relations, but the displays inside remain the same.  Some of the presentation is often deceiving (actions of the French and South Vietnamese jailors are implied to be American behavior) and over-stated.  They also report on all the anti-American protests from within the US and across the world during the war as if the world were unified in its views.  For a country that has no internal protest, these protests must look like prima facea evidence that the world was entirely behind them, including US citizens.  While this was largely true at the end of the conflict, it was less so at the outset.

Also, no mention is made of any poor behavior on the part of the “patriotic fighters” of North Vietnam.

In the US, it does not take much of an effort to learn about the ugly aspects of war.  We know about My Lai and Agent Orange.  While I am not proud of these horrors, I am glad that we face them and try to improve.  Seeing a country that admits no mistakes is disorienting.

Finally, the war is terribly difficult to explain to the kids.  When I attended the London School of Economics, I took a Political Science course called “The Ethics of War”.  It looked at two separate questions.  First, when is it ethical to engage in war?  Second, once in a war, how does one fight ethically?  The first is about justification, the second is about actions.

Clearly, there is much about the Vietnam conflict that violates conventional “ethical” fighting tactics (attacking without identifying clothing, killing known non-combatants, proper treatment of POWs).  It is usually used to show a multitude of examples of fighting a war poorly,  The question of justification is far more difficult to discuss with the kids.

In retrospect, the “domino theory” seems to be flawed.  First, most of Ho Chi Minh’s appeal and success are a response to years of French colonialism.  He was not simply a pawn of China.  Second, it is hard to explain to the kids the fear of communism.  It would be like me explaining to any of you the fear of scurvy or polio: it is something that no longer plagues us.  It is even harder to explain when the “communist” countries we have visited seem so darn free market oriented.  The “communist threat” seems less ominous when billboards advertise Marc Jacobs and Apple.

They somewhat understand that our nation was scared of this “communism” thing, but that was a time long ago – like a fear of witchcraft or sea monsters.

In the end, these museums have been a powerful learning experience for the kids, in war, bias and history.

Here are a few additional pictures. 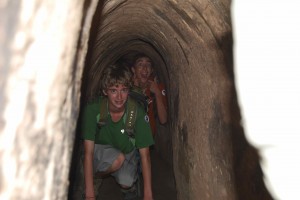 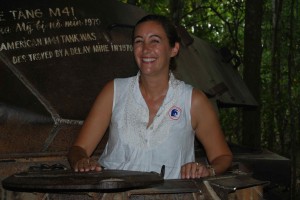 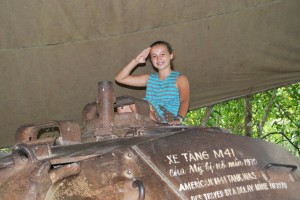 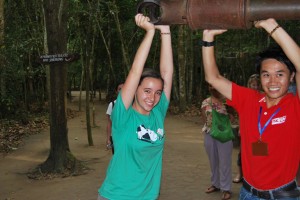