Hello everyone, and welcome to the First Annual Vietnam Cultural Oddities Awards.  Texas Monthly has the Bum Steer Awards.  Think of this as the Bum Yak Awards.

During our show, we will recognize the most noteworthy of traditions of the people of this fine country.

We have seen many intriguing oddities, but here are the best of the best.

Since we have already described the dog-eating habits of the Vietnamese people, I feel little need to add additional detail here.  I will never see Fenway the same way again.

Our first homestay here raised ants in a tree next to the house for his salad.  Just what the hostess with the mostess needs to spice up that drab spinach salad!  Careful when you bite them, as these critters bite back. 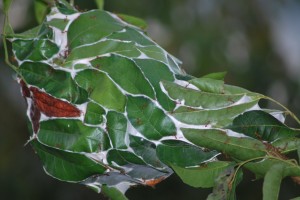 One of my favorite lines from the Simpsons came after daughter Lisa declared that she was becoming a vegetarian.  Homer responded, “You mean you will not eat ham or bacon or pork chops?”

“Dad, those are all the same animals.”

Dripping with sarcasm, “Oh yeah.  There is some wonderful magic animal that provides all that wonderful food!”

Homer did not even come close. The Vietnamese have their ham, bacon and chops.  But wait, there’s more.  You can also get pigs’ feet, snout, ears, organs and tail in addition to the usual items you can get at HEB. 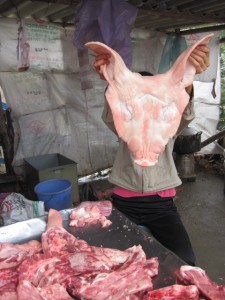 All I can say about this photo is that I hope and pray that this is the worst health code violation and not a new delicacy! 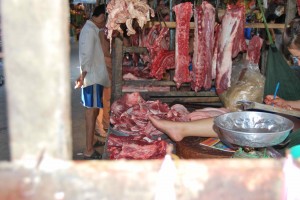 We might dye our hair in the US, but they take a more labor-intensive approach.  Every beauty salon offers “Plucking Gray Hair” as a common service. 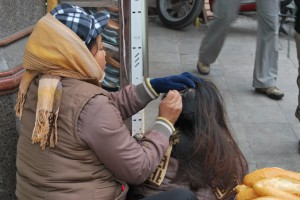 All the Men Want the Terrapin

I already showed the terrible picture of the man extracting blood from a turtle, so it will not be repeated.  I, however, must include this brutal attempt to stimulate virility in these awards.   I just hope these guys discover the pharmaceutical alternative for their issues soon.

Vietnam only recently started to celebrate birthdays.  Until recently ( the last 5-6 years) everyone just became one year older on the same day – Tet (their New Year Celebration.  Our guide is 21ish, but does not even know what day she was born.  She knows the year and the month, but “her parents cannot remember the day”.  We were to introduce this tradition in the US; Hallmark Cards, bakeries and party stores would all be gone overnight.   We would have a lot less cake-on-the-face at Camp Champions.

DEALING WITH DEATH or FUN WITH FUNERALS

The Vietnamese people believe that the dead must have money to help in the next life, so they leave money at funerals and when visiting family shrines.  But, perhaps not too much money (I guess you do not want to spoil them in the next life).  So what is the offering of choice?  Here are the top three offerings:

We underachieve in the US.  We only bury people once.  Here, they overachieve.  Soon after death, the body is buried much as they would be in the US.  The family then exhumes the body after 3 years “because it can be unpleasant if you do not wait long enough”.  They then clean the bones with water, then rose water and then herb water, so that the dead will now be clean in the afterlife. The now very tidy remains are reburied in a shorter, second tomb.  As we drive past the rice fields, we often see these second tombs in the middle.

The second burial is twice as nice!

Well, He Liked It When He Was Here

Each home has an altar in the middle of it that honors the ancestors.  Also, most stores also have smaller altars as well.  Each day, they put out water, incense and offerings that the ancestors would appreciate.  The offerings are really worth looking at.  We have seen candy and fruit.  I have seen a Fanta with a straw in it (the straw is an odd, if not awkwardly optimistic, touch).  Some people leave a pack of cigarettes (what if they died of lung cancer?).  Here is the altar from our tailor’s shop.

Both Chivas and beer?  I guess the ancestors like to have a chaser.  By the way, when we returned 8 days later to pick up our suits, the “333” beer had been upgraded to Heineken, I guess this is an upgrade for Tet.

This award does not initially seem to make sense in the “Dealing with Death” section, but if you spent any time on the roads here, you would agree with its inclusion here.

When we were in Europe, I had a great deal of fun with the Italian drivers.  After spending time in Germany, Austria and Sweden, the Italian approach to “lanes” seemed deeply impaired.  I marveled as they drifted from one lane to another on the highway as if being in a line insulted their freedom of expression.

Yet I realize now that they did seem to respect one lane – the center lane that separates from oncoming traffic.  They rightly determined that they should limit their drifting to those lanes traveling with them.

Not so the Vietnamese.  In our 2 ½ hour drive today, we spent 20% in the right lane, 60% straddling the middle and a full 10% in the incoming lane while it was packed with scooters and bikes.

I said “their lane”, but it clearly is not their lane.  It is the big guy’s lane.  We were in a big 15 passenger van, so the lane was our lane.