Taking in the Temples

We are in Cambodia, a country of great variety.   It features magnificent temples (from Angkor Wat the complexes of King Jayavarman VII) and the Killing Fields of Pol Pot and Khmer Rouge.  In some ways, it is as foreign as any place we have been.

Yet in others, it is very familiar.  Everything is delineated in dollars.  Sure, they have a currency (Riel), but simply everything is in dollars.  In fact, the only way you end up with Riel is when you need change.  They have US bills, but no coins, so $0.50 would come back as 2000 Riel.  Heck, the ATMs kick out dollars.  The one annoyance is their obsession with perfect bills – no folds or tears.  We handed the government workers a $100 dollar bill for our entry visa and they would not take it because it had an eighth inch tear in the side.

Other seems seemed non-foreign.  The drive from the airport showed dozens of luxury hotels that look like they should be at a beach resort or gambling mecca, not a third world nation.  That strip looked like Luang Prabang had spent time with with Las Vegas and had a love child (what happens in Laos, stays in Laos).

Finally, I must admit that I watched the BCS championship game today (or whatever that lopsided affair was ).  We lucked onto a hotel with ESPN, so we got to watch the game.  Since yesterday involved a 5AM wake-up call, we decided to let the kids sleep in while I watched the event.

But ultimately, this place is more other-worldly that first-worldy.  After our sunrise at Angkor Wat, we visited Angkor Thon, the last and greatest capital of the Khmer Empire and the brainchild of its most important king, Juyavarman VII.  He united Cambodia, Laos and Thailand in the 12th Century and then went on a serious building binge.

Angkor Thom was his masterpiece.  It has multiple features.

Intricate bas-reliefs encircle the main structure.  There are eight feet high and run for over a quarter of a mile. 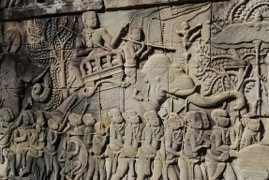 About a kilometer away, he built long walking terraces with hundreds of carved elephants and monkeys.  No, it does not make sense to me.  I am not a megalomaniacal monarch, though it sounds like a good job . . .When you are on the terraces, you cannot even see the exquisite detail of these carvings.

At each of the cardinal points (North, South, East and West), he built an elaborate gate with a massive head overlooking all entrants.  The gate is lined with 54 gods and 54 demons.  Both teams are holding a naga (a snake-like creature with multiple snake heads) that is 75 meters long.  Much of the naga has since broken away, but you can still see the effect. 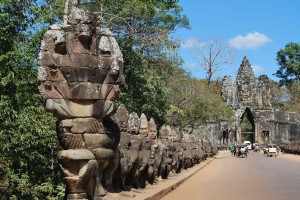 This complex is most famous for the heads that adorn the gate and the main temple (the Bayon).  Here is the temple at a mild distance. 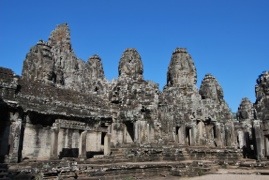 The heads are hard to see in the first shot, but when you get closer, they look like this. 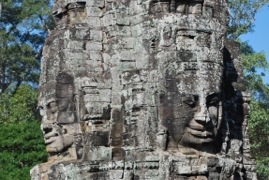 The heads are so prevalent that one even weaseled his way into a family photo.

They all meant to Avalokiteshvara, the Bodhisattva of Compassion.  A Bodhisattva is a person that achieves Enlightenment, but does not embrace Nirvana.  Instead, he or she remains on earth to help others achieve enlightenment.  These particular Avalokiteshvara all seem to look a lot like Jayavarman VII.  Hmmmmm.  Here is me going toe-to-toe (nose-to-nose?) with Jayavarman/Avalokiteshvara 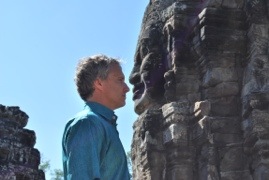 We even saw a massively pregnant monkey.

After Angkor Thom, we went to another of Jayavarman’s creations: Ta Prohm.  This temple looks the way many of the other temples looked when they were rediscovered by the Europeans who have helped lead the archeological repairs.  It looks like something out of an Indiana Jones movie, with trees embracing towers and piercing walls. 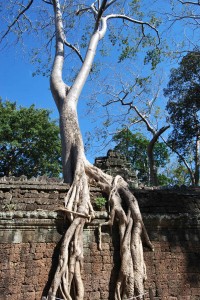 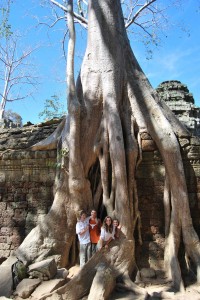 The restoration has been quite impressive.  Look at the before and after. 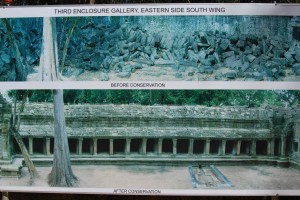 We had our own improvement to the scene – here is the after-after. 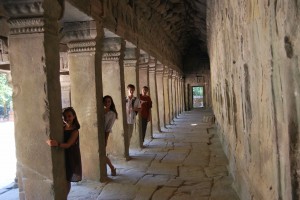 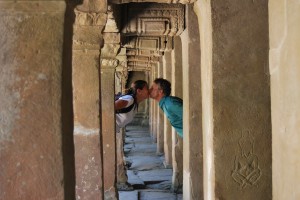 Later, we came upon this serene scene. 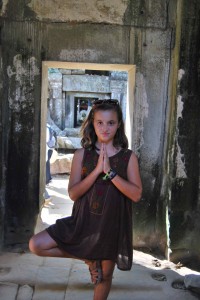 From there, we returned to Angkor Wat.

We approached from the East rather than the west. 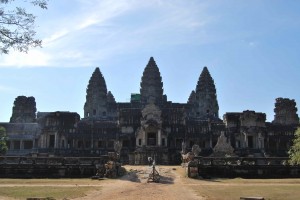 It had even more bas-reliefs.  These are 10 feet high and the Wat features half a mile of them. 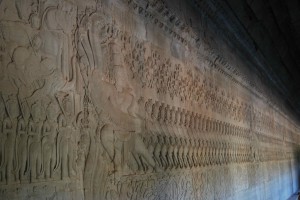 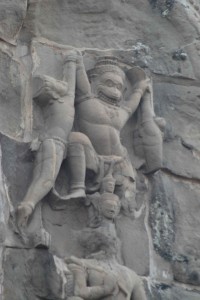 We enjoyed seeing the native costumes. 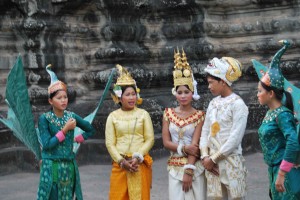 We also had some good family shots.  Here, the boys are doing what boys do. 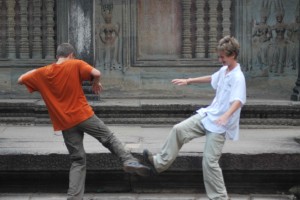 Terrill posed for this shot. 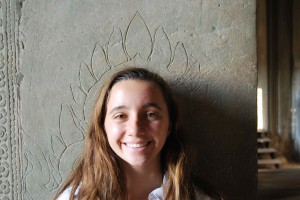 And here is the whole crew. 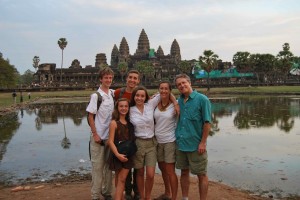 We will share a little about Cambodian history tomorrow.  Without spoiling the ending, let me say that it is never good to have a crazed communist dictator.