Yesterday, we joined eight other people on a Vietnamese junk (boat) for 2 days and a night in Ha Long Bay.

One couple is in their 60’s, speak only French and seem incapable of smiling.  Of course, if I could understand no one, but was sharing a boat with 3 teens and a 10 year old who all operate at top volume levels, I might not smile a lot either.

Two others are Hien and the French-speaking guide with this couple.

The remaining four passengers are all in their late 20s to early 30s:

She has led us to a couple of teachable moments.

The first regards the fact that she is sharing a room with and appears to be romantically attached to the German, whom she met 3 days ago.  I was happy that both girls independently noticed this fact and asked Susie about it, giving her a chance to talk about appropriate attachments and selectivity.

The second lesson came while we were asking about her travels.  After she had detailed the places she had lived, Terrill asked if she would ever return to the US.

“I will never live there again.”

I found myself irritated, but I could not initially pinpoint why.  It took me an hour to think about why this bothered me so much.  Sure, I am a fan of the US and do not like people criticizing it recreationally, but this was not the issue.

I was also bugged a tad by her in-and-out Irish accent.  She only she lived there for 6 months over 5 years ago, yet the brogue would emerge suddenly only to disappear moments later, popping in and out like a skiddish woodland creature.   The accent stuck me as an affectation, and not even a particularly good one.

Perhaps my irritation came from her tendency to share expletives even when Virginia was standing next to her.

But none of these were ultimately the primary source of my reaction: it was the negativity implicit in her comment that most irked me.

I struggle with negativity.  Had she said “there are so many places in the world I want to live, I do not think I will have time to return to the States”. I would have deeply admired her.  She was not moving toward new exotic locations, but away from the US.

I must thank her for helping me understand how strongly I prefer positivity to negativity.

When a person says “I hate onions”, that makes me want to tell them why onions are great.  My father, on the other hand, had a gift in this department.  He did not like onions, so he would say the following, “Oh, I wish I like onions.  They sound so crunchy and fun to eat.  I feel like I am missing out.”

When he attended our elementary school plays, he had a wide array of creative sayings to describe the performances.  As anyone that has ever attended a 3rd grade production can attest, these events are rife with children forgetting lines, wandering off stage and even crying spontaneously.

But Daddy always had a positive spin to things.  His commitment to never lie (so he could not say that the acting was good or the plot riveting) burdened him.  He had to be creative.

“Wow, that sure was something!”

“I loved those costumes.”

It took me years to realize the enthusiastic and excitatory way he spun these productions.  Rather than being offended, I appreciated his efforts to find the positive in these subpar productions.

I was talking to Liam about the attractiveness of being positive.  We discussed the difference between “I will never return to the US” vs “I want to travel so many places I doubt I will ever return”.  I said that it is always more appealing to hear about what someone wants to do rather than what they do not.

Unfortunately, he has trouble seeing this as a teenager.  Teens have a culture that is deeply rooted in negativity.  It is generally more “cool” to seem bored or critical than to be effusive and affirming.  This habit stems from a fear of ridicule.  Most children worry that they will be mocked if they say that like something.

“How can you like the Lion King?  That is a kid’s movie?”

“Man, I cannot believe you listen to Selena Gomez.  She is popular with kids that wish they were teens.”

As a result, the safest approach is to be critical and negative.  In this way, they never put themselves out there for criticism.

Given this pervasive teen habit, Liam had trouble grasping my point.  I gave him an example that I hoped would resonate: choosing a movie.  When a group is trying to select a movie to watch, it is more attractive to say “I would love to see a comedy” rather than “I do not want to see a chick flick.”

He responded, “What if I say ‘I am good with anything as long as it is not a chick flick?  I am showing that I am flexible, but I am avoiding the movie I do not want to see.”

“You are missing the point.  The key part of your statement is still about what you do NOT want rather than what you do want.”

“But what if I am truly OK with anything but a certain movie?”

“You can get what you want and still be positive.  Lets say there are 5 movies to chose from and you want to avoid the boy-meets-girl-loses-girl-redeems-himself-wins-girl formula movie.  You could say the following: ‘I would love to see a comedy, or an action movie.  In fact, I think it would be awesome to check out a mystery or the animated movie.  I would be excited to see any of those.

That enables you to be positive and express your preference.  If someone then says ‘What about the Drew Barrymore flick?’ you can say ‘I am much less excited about that one, lets look at the others.”

I am not sure how much he heard me, but it does help that I he is associated negativity with the Californian-turned-Cambodian woman.  Every time that she cursed in front of Virginia (6 by Virginia’s count) or pontificated on the superiority of non-American cultures, negativity becomes less appealing.

OK, now that I myself have pontificated, let me give you a short update on our day.

Ha Long Bay is profoundly gorgeous.  Unfortunately, we did not have great weather, but the mountains remained memorable despite the mist. 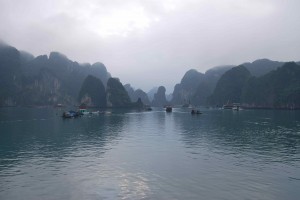 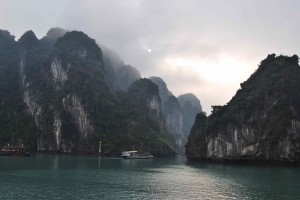 We visited a floating village and kayaked around another. 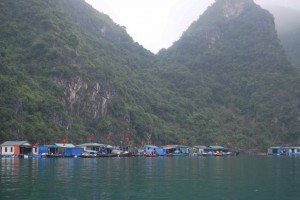 Here is our crew as we concluded our cruise. 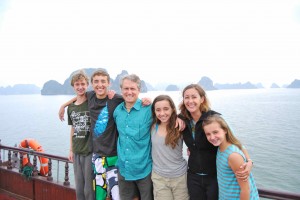 A return to Hanoi is the next stop on our agenda.