We have seen several fun sites already, so this blog is a series of short snippets to share them.

When we were here 3 years ago, we arrived in the town of Rotorua late one afternoon. Rotorua is nicknamed “Rotovegas”.  To my mind, this is perhaps the most silly nickname I have heard.  It would be like me playing basketball against eskimos who did not know the game at all.  Despite my mediocre skills, I would dominate.  But would you call me LeBron?  Rotorua is about as close to Vegas as Susie is to a professional weightlifter.

I am guessing that they gave it this nickname because people come here on vacation from Auckland and other cities on the North Island.  They have spas, some entertainment, geothermal parks, a large lake and fun restaurants and bars.  That is it.  No gambling or strip joints or insta-weddings of fake Elvises.  They do not even have neon.

OK, maybe they have one legitimate claim to the title.  While we were walking the “city”, we heard a group of guys yelling in the distance.  As we approached, we could tell that they had enjoyed a beer or 15.  It was only when we got across the street (thank all that is holy that we were across the street), that we realized that this was a bachelor party run amock.  Here is a picture of what I can only assume is the groom.

If you do not want to look closely at the picture (and I recommend that you do not do so), I will tell you that he is shackled to the street sign.  He also is sporting lots of scratches.

The guys were not rude, but welcoming.  They happily yelled at Susie and Terrill, inviting them to join in the fun.

When we arrived here 3 years ago, we came to the museum of Rotorua which stands majestically in front of several bowling lawns and croquet fields.  Terrill and Wiley went to the grass as did handstands, forming lovely long shadows.

Our return to the lawn this year was a little earlier in the day, but they attempted to recreate the shot here. 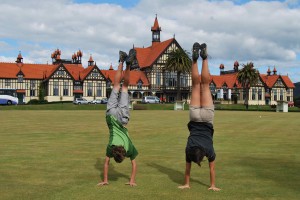 Standing Guard on the Guard

Also at Rotorua, we came upon a statue of a local Major that stands guard of the gardens.  Serving as a sentinel can be hard work, so we are glad he had help from a feathered friend. 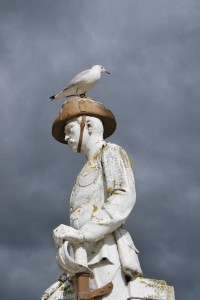 Learning about the Maori

Throughout the central part of the North Island (Rotorua and Taupo), there is a high concentration of Maoris, the native people of New Zealand (Aotearoa in their tongue).  It is odd to call them “native” because all humans are late arrivals to these islands.  The Maoris probably came from Polynesia around 800 AD. They continue to practice their traditional culture while also integrating well into the society.  In fact, this country has one of the most successful assimilation of natives and Europeans in the world.  Signs are in English and Maori.  Heck, they even added a verse in Maori to the national anthem.  There were some tensions at time, but they seem to have bridge most of them.

Here is a Maori carving.[Photo coming]  I wish I could upload a video of the haka, but alas, you might just have to Google it.

The Holy Church of Rugby

We think that the key to healing between the Maori and the European descendants has been rugby.  The team is a mélange of Maori and European-descended players.  They also have a tradition that has made their national team – the All-Blacks – famous for more than just their great play.  [Note: rugby is religion here.  Despite the smaller size of this country, it consistently has the best rugby in the world.  The All-Blacks are famous for being the best, but choking in the World Cup.  They have lost 5 times despite being the favorite since their last win in 1987.  Their victory in the 2011 World Cup was the greatest gift the nation could have had.  I am not kidding about this.  I watched the coverage and saw people of every age, race and gender openly weeping.]

The All-Blacks are known for one additional tradition – the haka.  The haka is a Maori war dance that involves chanting, powerful gesticulations, pounding of chests, sticking out of tongues (“I eat my enemy”) and general intimidation.   It is a site worth seeing.  Anyone playing the All-Blacks spends at least a few hours discussing what they will do as the All-Blacks perform their haka at mid-field before the game.

I am not a gardener or an expert in flowers.  Even so, you cannot walk or drive around this country without being struck by the beauty of their gardens and wildflowers.  Apparently, the mild weather and fantastic soil makes this the greatest place on earth to grow things.

In less than a century, Redwood trees grow here to heights that would take California 2-3 times as long.

We regularly see show-worthy hydrangea growing untended along the road.

On occasion, I will share some shots.  Just deal with it.

A Photo for Our Campers

Each summer, Susie invites every girl’s cabin and I invite every boy’s cabin to our home.   Susie calls hers “Friendship Games”.  They eat snacks, drink sodas and chitchat.  We guys are too macho for that.  We guys have munchies, enjoy beverages and talk.  Oh yeah, and we call it Man Cave.

With that in mind, I was delighted to see this sign. 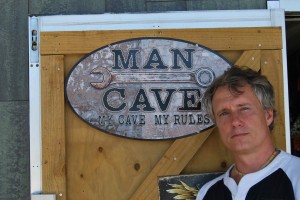