We are falling for Laos.  The people are unfailingly pleasant.  The country is beautiful.  The food is good if not excellent.

Luang Prabang is physically the size of Marble Falls, has 105,000 people and is the third largest city in Laos.  As I told you before, it was formerly the capital and is still the spiritual center of the country.  Monks in saffron robes stroll the street, accept gifts of rice in the morning, do chores during the day, pray intermittently and talk on the occasional cell phone.

The morning begging ritual is one of the events that many talk about.  Before dusk, devout Buddhists hoping to earn “merits” line the main street with sticky rice. [Note: apparently, your karma and reincarnation status is effected by the quality of your actions in this life.  I was familiar with this concept.  What I did not know is that there are different acts that earn you “merits” for the next life. Feeding the poor and hiking around sacred mountains are good ways to get merits.  Having a son be a monk is another. It begs the question, are there ‘demerits’?] The monks then emerge and walk the street with their alms bowls, showing their humility as the non-monks show generosity.  Sadly, a third group also appears, a veritable paparazzi of tourists taking pictures (which is great) and interrupting the ritual (which is disappointing).

The Baskin hotel is 3 kilometers away, so we did not see the ritual, but our friend (who is living in the town) got a great shot. 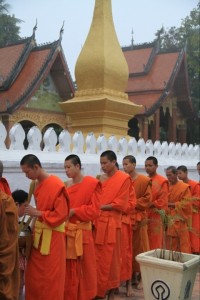 Laos seems like an unlikely place for a communist regime, yet they have one.  The government seems to have no interest in disturbing the Buddhists or the vendors.  From what I can gather, the leaders (an 11 person Politburo and 22 person Central Committee) are A-OK as long as they stay in power and stay rich.  Apparently the kickbacks business is alive and well in Laos.

Ultimately, I think the people of Laos will stick with us the most.  They are kind and loving.  They love their families and celebrations - both big and small.  We saw weddings and we saw picnics.  They move at a relaxed pace.  They do not worry.

That can make Jamaicans seem uptight.  We hailed a cab for 6 and got this tuk-tuk.  This tiny thing is considered a viable option for a family of 6. 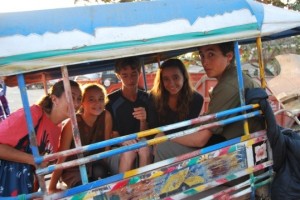 Sometimes, the pace is a tad too relaxed.  For example, we prepaid for a driver and van to visit a stunning waterfall today.  They had our name, hotel and room number.  We agreed to 10 AM.  Apparently, they did not fully understand that Jan 1 follows New Years Eve.  We got a complete no-show.  Our sweet concierge spent an hour looking for a van driver that did not “drink too much beer last night”.

Speaking of Phon (the concierge, pronounced “fon”), he is a treasure.  He greets us with oranges when we return.  He has scheduled several events for us.  And he, like most Laotians, loves big families.  The Americans with 4 kids became a quick favorite.  Today, Susie was visiting with him about the boys.  She mentioned that they are twins.  He got excited.  She then said that today (New Years Day) was their birthday.

Here is a rough summary of the conversation.

Susie explained that Wiley and Liam are twins.  He did not understand the word.  Susie pantomimed ‘pregnancy’ for him, held up 2 fingers and pointed to the boys.  It is worth noting that this display of charades never fails to communicate clearly or to amuse me.

His eyes went from nickels to quarters.

Several minutes later, Susie was asking about places to get cakes.  When Phon asked why, she explained that today (New Years Day) was the twins’ birthday.

I would say that his eyes went from quarters to Susan B Anthony dollars, but that would understate it.  I think we heard an audible gasp.  We know he stepped backwards in excitement.

“You SOOOO lucky.  You luckiest person I ever meet.”

The Laotians are quite superstitious and New Years and twins are both big deals.  I honestly think he expects sparks to fly from the boys’ fingers.

Speaking of sparks, let me share our New Years Eve with you.

We started with a lovely meal with Silver Ma’am and Matthew Sir.  Since they and Susie all went to Kellogg together, we took a photo for their publication.  Here is an advanced copy. 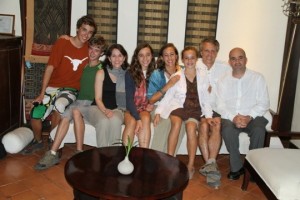 We lit and launched some sky lanterns, traditional Chinese lanterns that fly hundreds of feet into the sky and create a parallel universe of glowing stars.  You light then on special occasions, make a wish and send them aloft. 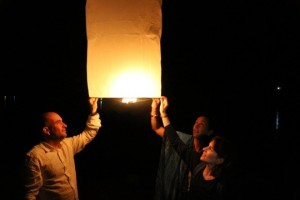 We also bought some Roman Candles and lit them off. 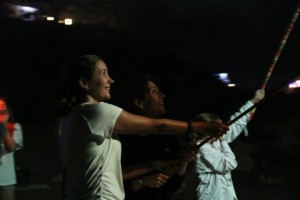 We eventually ended up downtown to see fireworks, see all the lampoons and simply enjoy the evening with our friends and the Laotians. 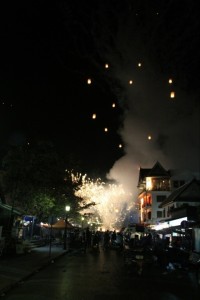 Before I go, I will share one great shortcoming of these wonderful people.

The people of Laos are, I believe, collectively tone deaf.  They have terrible music.  Imagine the tortured cat sounds of Chinese folk music.  Now imagine it off-key.

They love karaoke.  They should not.

Even their “modern” music is terrible.  Some sounds like bad Ted Nugent and some like bad Karen Carpenter.  Hey, I can appreciate the Motor City Madman and the dulcet tones of the Carpenters, but both can be made worse in reproduction.  Much, much worse.

I am going to go so far as suggest that the only reason that Laos has not taken a greater role in the history of the world is the fact that no other countries want to partner with a nation that might break out a tone-deaf version of “Louis, Louis” at the next party.

PS I think Phon is right. I am one of the luckiest guys around.