Keeping Pace with the Pachyderms

I have a lot of pictures to share, so you will get fewer words.

This will be picture heavy for several reasons.  First, traveling with Matthew last week stirred my inner shutter bug.  He was a truly talented photographer that saw things that I simply did not.  I have been trying to pick up a few things.

Second, I learned how to crop photos for this blog.

Finally, we had a day that is better described with pictures than words.

Before I describe the day, I want to post a few more from yesterday.

I included an ironic shot of a man wearing a gun-toting shirt taking a picture of a serene buddhist monk.  Susie pointed out that the shirt was too small to read.  Here it is again, in all its misspelled glory. 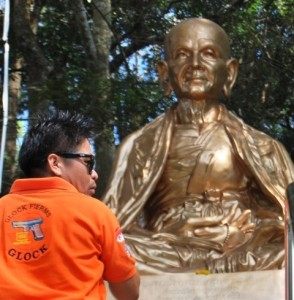 When we went to our second temple, I meant to share this shot of the dragons that flank the entry stairs to the temple. 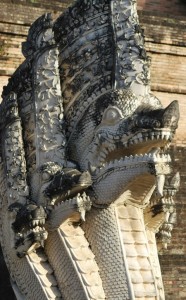 When we arrived at the first wat, they had a series of different acts that encourage good luck and merit.  Some people chose to have a monk bless them.  Others wrote their names on a pole that would be propped against the Bodhi tree (the Buddha attained enlightenment while sitting under a bodhi tree - this tree is claimed to be related to that tree).  There is incense to burn or candles to light.

This wat also had birds in wicker cages that you can release to create luck and blessing.  The girls thought that this would be an interesting way to experience the wat authentically in a way that was not too awkward.  They were so excited.  They purchased a cage with 4 birds for $3 and asked me to capture the moment.  I felt pressure because I could see their photographic expectations.  I would capture their radiant faces (each dappled in sun) as the looked upward at the 4 birds - each in full flight and easily recognizable in the picture.  I knew it would be tough and I would only get one shot.  I prepared and asked them for a count.

In the meantime, Terrill was attempting to discern the nature of the lock.  She found it, opened it, and four very small and VERY fast birds were in the next county before I knew they had left.

So the perfect picture did not happen, but I am not the sole owner of the failure.

Here is a picture before we all blew it. 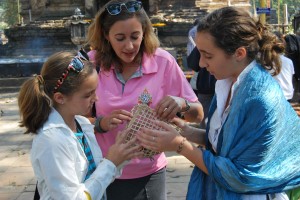 OK, I can now move on to a spectacular day today.

We went to the Bang Kub Elephant Camp.  Chiang Mai, Thailand is famous for its elephants, which is one of the reasons we are here (you will learn about another tomorrow - I am quite excited).  Once we got here, we learned that all elephant experiences are not created equal.  Most involve one hour of riding in a wooden saddle on elephants that are often rundown and ill-treated. 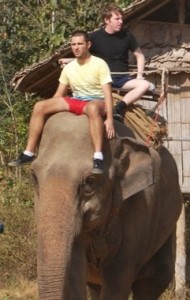 Our camp is committed to healthy and happy elephants.  The elephants were once a huge part of the teak lumber trade, but once the forests were essentially cleared out, they lost their jobs and their human advocates.  The animals suffered for years until tourism filled the gap.

Our tour was an all-day affair.  We learned commands in a tribal mountain language for 30 minutes, including a quiz.  We learned to feed them (they eat between 450 and 650 pounds of food each day).  We then learned to mount and dismount them.  There are two mounting methods. 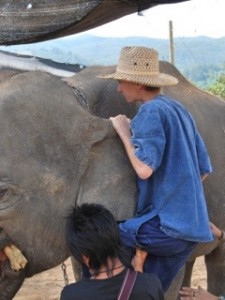 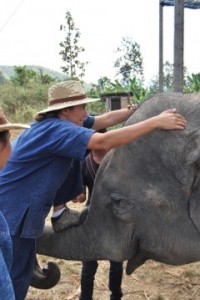 There is just one way down - sliding down the face: 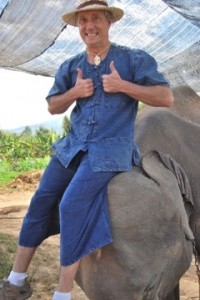 Our trainer elephant is named “Real Man” in Thai.  He is just 12 and recently returned from 5 years of training school.  He will live to be 80-100, so he is just an adolescent.

We trained in steering the elephants by ourselves and in pairs.

I am not completely sure how well we did.  Each of us would have moments when our commands and the gentle kicks behind the ears would steer the massive beasts like a car.

Real Man would then spot some bamboo or loose grass and we would suddenly feel like we had no more control than that we command over the weather.

We ended the morning session with Real Man putting each of our hats back on our heads. 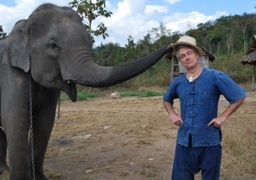 Here we are after our morning training session.   Yes, they required the stylish denim outfits. 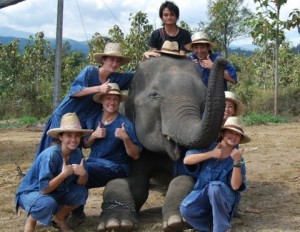 At lunch, we compared notes and ate.  We followed lunch with an hour hike through the jungle followed by an hour splashing in the river.

Perhaps the most special aspect of the morning was the fact that two of our cows were recent moms with children in tow - a one year old girl and a 4 month old boy.  They were ridiculously cute and playful.

Here are some picture from the hike. 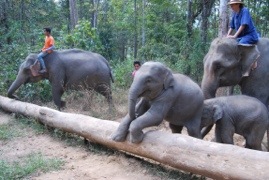 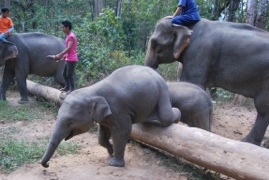 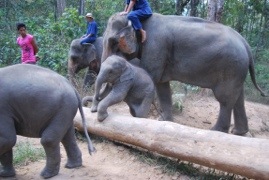 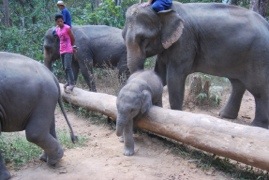 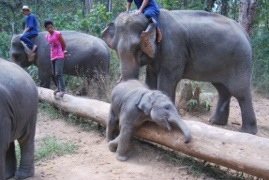 I hope you appreciate that each of us is on our own animal here. 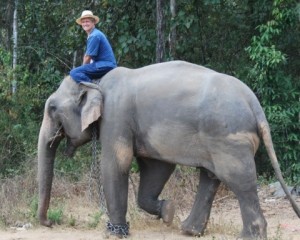 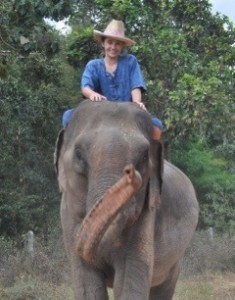 We then ended up in a river where we washed our elephants.  As you might guess, this became a huge water fight.  What you might not expect is the fact that the elephants started it, especially Real Man and his confederate Virginia. 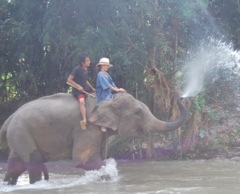 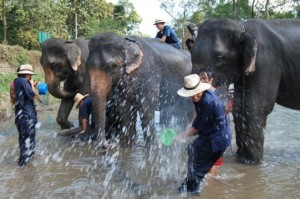 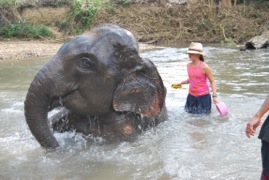 So you get out of the bath, feeling fresh.  What is your next move.  Rolling around in the dust?  Me too. 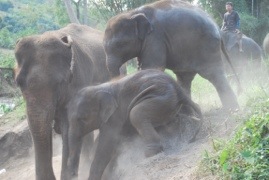 Right before we dismounted, we had to walk down off a 3+ foot ledge.  This ledge became a preferred spot for scratching sides, backs and - er - other areas.  My guy (the sire of all the calves) needed to scratch himself.  A professional baseball player would be proud. 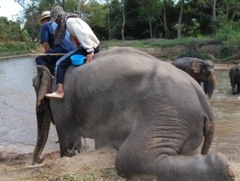 Today was the event Susie most looked forward to.  Tomorrow is mine!  See you then.