Great Arrangements If You Have Earplugs

Note: we are back in cell range for at least a couple of days, so I am posting at least 2 blogs per day to catch up on the ones I wrote over the past 4-5 days.  Please read this one and the one that follows.

Yesterday, we left Hanoi for the mountains.  A friend recommended a travel company to us that provides encounters with authentic Vietnamese people.  We started in Hanoi with Hien, our guide.  The first day is designed to orient us to the people and the country, thus visits to Ho Chi Minh’s mauseleum and the Museum of Ethnology, where we learn about all the indigenous people.

After that orientation day, they take groups to the country to meet, eat and sleep with a family.  Groups have offered these experiences for years.  In fact, they have become so popular that some “authentic” villages have over a dozen homestays happening simultaneously.  The man who formed Ethnic Travel (our company) was a tourguide for years and had seen the degradation  of the experience as it became an industry.  His answer was to go farther up into the mountains and find a village that serves no one else.

As I mentioned before, we first met the 86 year-old widow who was the weaver.  From there, we went to a family that lived next to a rice field.  We met the family animals: the chickens (one of which we met later at dinner – if you know what I mean), the pig and the water buffalo.  We even got to feed the water buffalo banana plant stalked that we cut ourselves.

We spent some time in the kitchen with them 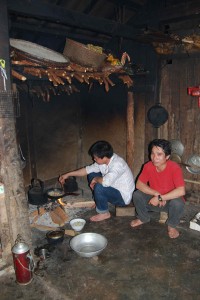 and even helped a little for dinner.

This was a true family meal.  The father and mother were there as were Hian, our driver and us.  We also had an additional character.  You know the cliché about the “drunk uncle” that makes everyone just a little uncomfortable at dinner?  Well, we did not have one of those.  He was a cousin. 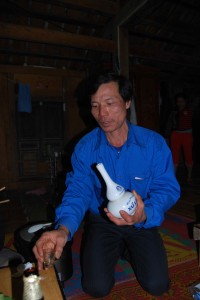 Remember when I told you that it is rude to refuse a drink with the host?  I have learned that this includes the host’s relations.   On the bright side, I managed to get Susie and the kids out of harm’s way by letting him toast with me and not everyone. 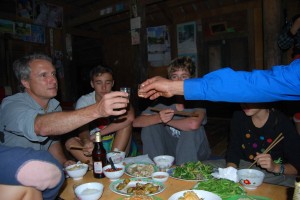 Otherwise, the key to avoiding massive intoxication was a combination of never making any eye contact (he cannot toast you if you do not see him) and creating distractions.  Luckily, they had a guitar.  It was terribly out of tune, but that did not stop Cousin Hootch from strumming away.  Liam then spent 20 minutes attempting to tune it before he played for a while. 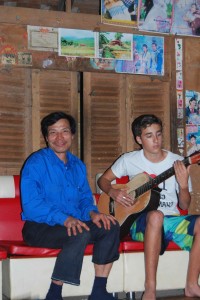 Just as the Toast-meister was returning to inflict more damage our host decided (mercifully) to demonstrate the flutes that he had made.  He fashioned one from a broken walking stick and then impressed us with his skill. 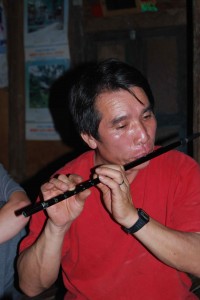 I later learned that the cousin had attended a wedding earlier and merely joined us as he thought that the party would continue.

We also learned of a Vietnamese saying: “If you are not drunk, you cannot leave the party.”

Let me assure you that his departure at the end of the meal did not violate this axiom.

We then slept in an addition to their home, an elevated single room with bamboo walls and floors with a thrush roof.  There were three double bed-sized mattresses on the floor.  Once again, I think I now know where the used futon mattresses from college dorms rooms end up.  We also had 3 sets of mosquito netting.  After surviving the Mad Cousin, we went to bed to a symphony of natural sounds: cicadas, bullfrogs, birds and bugs that creaked in the roof.

It was a serene serenade.

Of course, the unexpected addition of roosters at 3:30 AM removed some of the romanticism.  [Note: I have no idea if roosters do this everywhere.  Is the idea of the rooster crowing at dawn absolutely a myth that only the most ignorant of city-dwellers cling to?  We essentially live in the country at Camp Champions, but since we have no roosters, I cannot speak to this question.  If, in fact, they crow from 3:30 AM until mid-morning, how is it they still walk this earth and have not been eliminated by a sleep-deprived horde of carnivores.  Believe me when I say that several mornings with such time-challenged roosters would transform the collective membership of PETA into a group of KFC franchisees.]

There was much amusement at the sleepy emergence of the teen boys at 8AM from the host family who had been up for 3 hours.  The twins looked like the walking dead as while dad was shaping boards (he is a farmer and a carpenter), his dad was in the rice field and the mom was tidying up and serving breakfast.

Today would be a travel day.  With the exception of a 90 minutes bike tour, we would see northern Vietnam (and its often unpaved roads) from a van.