Please allow me to start this blog with an apology.  Last night, I attempted to blog very late at night.  I did this frequently in Europe (writing at midnight or later), but I always reviewed and published them the next day, since I often made mistakes.  Heck, I fell asleep writing on at least 3 occasions.

Last night was the second fall-asleep-while-typing nights I have had in Asia.  Susie woke me with my hands on my laptop when she got up in the night and saw me not there.  I then hit “Publish” rather than “Save”, so a garbled mess hit the blog.  My favorite mistake was the result of the computer’s auto-correct.  I was writing “yesterday, we had a déjà vu moment” and it got corrected to “yesterday, we had a dave moment”.

I mean no offense to dave, but we did not have any such moment.

I also clarified a bit of the Elephant Parade story.  So if you worry that I am losing my mind, you are probably right (who travels with 3 teens and a 10 year-old voluntarily).  But yesterday’s blog is not evidence of additional mental instability.

As long as we are confusing “dave” and “déjà vu”, here are two more examples of word errors.

We have been hearing lots of the Carpenters on this trip.  I do not know why, but we have their songs in every country we have visited.  It prompted a conversation about eating disorders, since Karen Carpenter died of anorexia.  Eating disorders are a subject that we think about a great deal.  Each year, we have some campers who are struggling with these issues and with their parents’ support we help and provide a little extra TLC at camp.  Also, with daughters 13 and 10 living in a world that glorifies skeletal models, we want to be sure that our own children do not fall prey to eating issues.

While we talked, the girls asked to see a picture of Karen Carpenter.  I Googled her name and ended up at a site called “Famous Dead Mormons”.

Susie glanced over my shoulder and gave me a horrified look.  “That is a terrible site!”

“I cannot believe that they would call it “Famous Dead Morons!”  (Obviously, in this case Susie was as sleep deprived as I.)

Today, we are flying Bangkok Air to Cambodia.  While in their comfortable lounge, Virginia (who visited the hospital yesterday to look at some hives) came to me and said “I love this airline, but they have a bad slogan.”

“Exclusive Service to Exotic Germs?!?!  That does not sound good!” 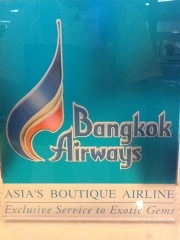 This sign was outside the gate.  I can only conclude that there is a dearth of English editors in Chiang Mai. 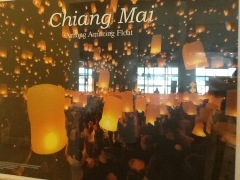 I guess I should give a little more detail about Virginia’s visit to the hospital.  It was not a big deal, but Susie wanted to be extra cautious when she saw some hive-like sores below her knees and nowhere else.

You should know that Susie is incredibly knowledgeable about medicine.  This knowledge can be a great gift when it comes to running the camp Health Center (the Ill Eagles Nest) or preparing for a trip like this.

The knowledge, however, can also lead to the tendency that most med school students often have in their first or second years of school.  As they come to student various ailments, they often become border-line hypochondriacs.  Suddenly, a native of Nebraska studying in Chicago will suspect that he has Dengui Fever or Swamp Foot.

Susie has studied all the various ailments that are unique to Southeast Asia.  One of them is a type of parasite indigenous to fresh water in the area.  It can enter the body while swimming and attach to internal organs and do a lot of damage over a 2 year period.  In fact, if left untreated, they can do irreparable damage and go undetected until it is too late.  These parasites often create no early symptoms, though pustules and rash can occur in the first several days.

Remembering that we had cleaned our elephants in the river, she wondered if Virginia might have this somewhat rare ailment.  Just to be careful, she dropped in a hospital that was a 10 minute walk away.  They saw Virginia immediately, drew blood [Note: they use large gauge needles in Thailand, a fact that anyone within earshot of Virginia might have deduced yesterday.]

They then told us to come back in 2 hours.  In that time, they performed two sets of blood labs.  When Susie and Virginia returned, they ruled out Chicken Pox, allergies and saw no evidence of the parasite.  The best theory was bed bugs.  Total cost was $40.  More good news, the cream prescribed seems to be successfully treating the sores.

This morning, Susie was bemoaning our schedule for the day.

“Ugh, we have a 4 hour layover in Bangkok on the way to Cambodia.”

“That is OK mommy.  That airport is so clean and pretty.  They have great lounges.  Of course, if we were stuck in Luang Prabang or Kathmandu, THAT would be a bummer.”

I am not sure how I feel about having children that have distinct opinions on airports or airlines.

It reminds me of a camper who was talking about his preference for high thread count sheets.

I am not sure when one should care about thread count or airport lounges, but it is later than 10 years old!  (If it should ever happen at all.)

PS  We had a miscommunication with my Davidson friend who lives in Cambodia with the World Health Organization.  Actually, we have had two miscommunications.  He visited this summer (before his move to Cambodia) and he indicated that he thought he would be living in Siem Reap.  We planned our trip and then learned that his family is in Phnom Phen.  He, however, said he would come to visit us with his family.  I sent him our dates a while ago and he saw that our trip overlapped on the weekend, with us arriving Sunday night.  Somehow he translated “arriving Sunday night” into “here for the weekend”. We just learned that we will not be able to see him, his wife or his 4 kids (3 adopted from third world countries he’s lived in).  We are bummed.