After the bike in the cement day, we stayed at a guesthouse/noodle factory (after being in Asia for 9 weeks, this combination actually makes sense to me) and had another massive meal. 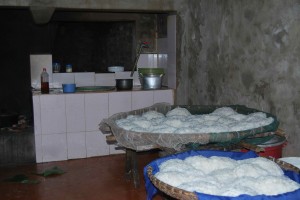 We woke the next day for a day of discovery.  We walked, biked, climbed and floated – all through stunning countryside. 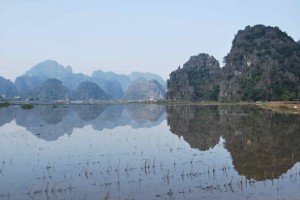 The topography reminded us of the area around Guilin, China: round karst mountains that rise improbably from rivers and fields.  I find these hills stunning and fascinating.  They seem other-worldly since there is no equivalent in the US that I can think of.

I was prepared to see different looking people and clothes, hear different languages, and taste different foods.  But each of these differences relate to people, not geography.  I tend to think of cultures varying, but the land staying the same.

Sure we have some anomalies in the US like the Grand Canyon, but you can find other smaller canyons other places.

These mountains do not have a Western equivalent.  That makes them magic to me.  I find myself back to my elementary school days reading the Lord of the Rings and other mythic books that described beautiful, foreign lands.

Yesterday, we also had a light mist settling over us that enhanced the mystical air of the site.  I kept expecting to see a troll or wizard to come through the mist and greet/threaten us.  Part of me just wants to get lost in the scene, silent and serene.

But I am with the Baskin Clan.  Silent and serene left town.

Even as I jokingly complain, I feel blessed that our children still want to talk with us.  As I rode my bike yesterday, each of the four kids peddled next to me to ask a question or join a conversation.  Most of the time, quantity is not better than quality, but I do not think that this is case with family.  Sometimes, quantity time is more important that quality time.  The strongest bonds are forged in good and bad times, when excited and bored.

Back to the day.  The agenda was simple, we walked for an hour through a series of rice fields filled with working farmers and fishermen.  In the still air, the reflections were lovely. 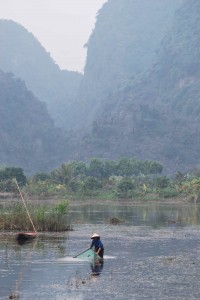 We also saw what could only be described as a herd of ducks.  “Flock” did not seem sufficient to describe this formation of fowls. 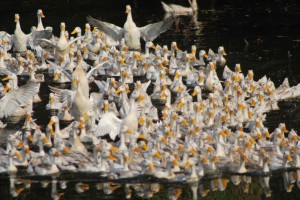 We met the woman who owned the ducks.  She explained that the ducks are free all day until she rings the feeding bell at night and they all come in to roost.  She collects and sells the eggs.  Wiley, excited to meet a real-live “duck-rancher” (remember, he insists that this is a herd), wanted to ask how many “head of duck” she had, but Hien did not think the woman would appreciate Wiley’s odd sense of humor.

We then drove to a shrine where an odd but delightful man served us tea and played a veritable symphony of Vietnamese instruments for us. 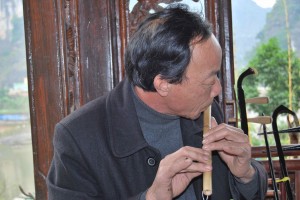 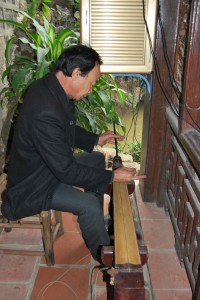 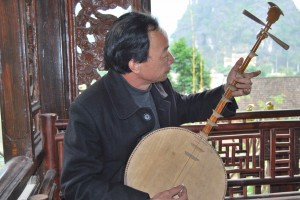 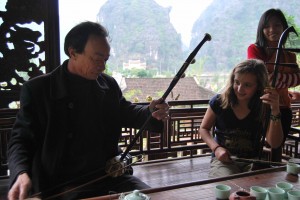 We got a chance to play. 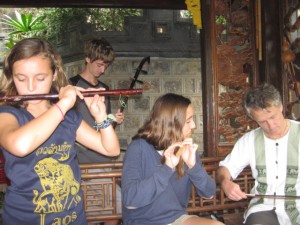 He reminded me of my Uncle Si who loved music.  His favorite activity would be to gather friends together for shared stories, drink and music.  This guy was Si.  After 30+ minutes of demonstrations and pantomimed music lessons, we left right before he broke out his tobacco (and I suspect) his happy water.

In addition to the music, his site provided two other experiences.  The first was a mountainside shrine with a deep hole called the “Well of Hell”.  It was capped with a Yin-Yang symbol and had lights at its bottom. 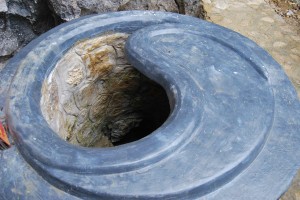 After glancing into the Well of Hell, I went to the bottom of the stairs for the final experience – a boat ride.

On this ride, a 50 year-old woman rowed us through a cave and along a narrow river.  We saw these people fishing.  Their boats are bamboo frames poured with concrete that sit incredibly low in the water.  One person paddles while the other sticks two sticks in the water.  These sticks are connected to a car battery.  Yep, these are electro-anglers.  We saw them pull out two fish in the 10 minutes we watched them. 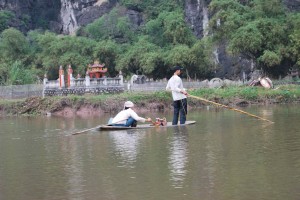 We then continued on and saw the beauty of the flora and fauna.  We saw kingfisher birds with blue plumage so bright that we initially thought them to be tarps. 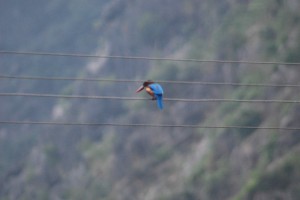 We spotted white ducks and water ducks.  We appreciated the pink water lilies reflected in the still stream. 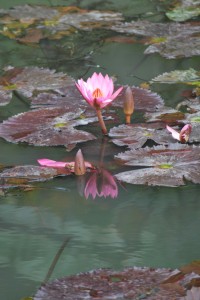 We eventually came to a group of turkeys.  Turkeys are not indigenous to Vietnam, so these were all domestic.  Despite their captivity, they do not take well to strangers.  Of course, it did not help that Susie was taunting them with an oddly effective turkey call (I assume that 17 years of marriage to one turkey gave her skills in this area that many lack).  The single tom (the one male among 20 hens) gobbled and puffed his chest and paced and gobbled again. 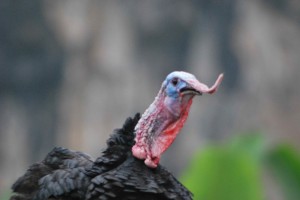 I hope our giggles did not threaten his turkey-hood.

We then went on another bike ride through the country and some villages.  The paths were often less than a foot wide and muddy, but the ride delighted us.

In the middle of the ride, we came to a mountain sacred to the Buddhists.  This mountain is a pilgrimage site that oversees the stunning landscape once its 500+ steps are conquered.   Once again, these steps are not to code, but are instead almost twice the height of standard US steps.  I believe we ascended almost 1000 feet.  Here are the stairs from the bottom. 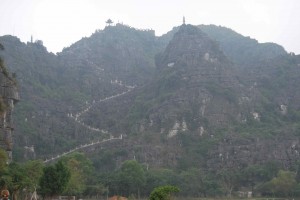 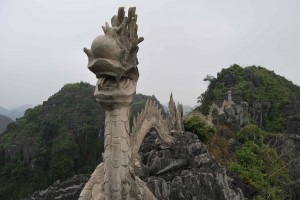 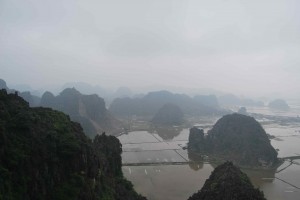 We then rode back and returned to the noodle factory/guesthouse.  On the way, we found the sleazy bar with the wifi that we used to post the blogs a couple of days ago.

With a warm comfortable bed, a day of exercise and another full meal, we slept like Fenway.

We will wake early and head to Ha Long Bay.