Cao Dai for the Western Guy

My final blog on Vietnam will be on a quirky and intriguing religion unique to their country: Cao Dai.

I will be honest - this feels like an anticlimactic conclusion to such an intriguing country,  But I have some interesting pictures and I have failed to share this with you.

I see Cao Dai as Vietnam’s answer to Scientology.  This odd religion was formed by a man (Ngo Van Chieu) in 1926 in the southern part of Vietnam.

You might think that a country of less than 20 million people could get by with Confuciusism, Animism, Daoism, Christianity,Hinduism, Islam and Buddhism.

You would lack that Ngo Van Chieu’s vision.

Like L Ron Hubbard, Ngo wanted to create a new religion.  When he started the religion, he worried that the French would stop the spread of Cao Dai, so they called the center church a “rubber farm” and held services in a temple secreted among rubber trees.

In fact, some people suggest that Ngo created a religion designed to refute the French colonialists, as if to say ‘we can have our own religion without you’.  I tend to think this is an extreme way to make a point and that Ngo must have had some greater motivation to start the religion than rebellion, but who can tell?

Each of the three major Asian religions are represented by different colors.  Yellow is Buddhism, Blue is Daoism and Red is Confusciusism. 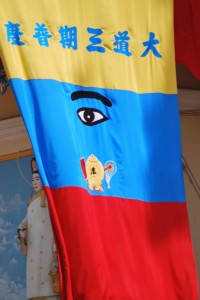 You will note that no western religions are officially represented. But that is deceptive.  Their services (4 times a day) resemble a mass. Their leaders wear miters.  They say the God has connected with man 3 times in history: once with Moses, once with Jesus and once with an odd trio (see below for the details).  In any event, they really seem to borrow from ALL major religious belief systems.

Here are a few highlights of the beliefs. 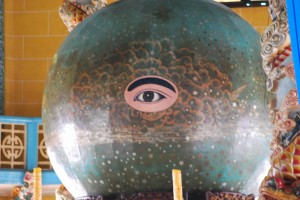 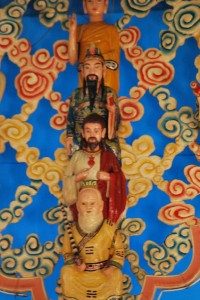 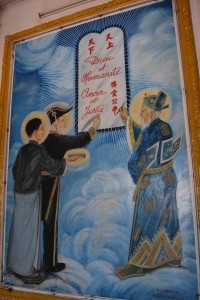 Yes, Victor Hugo is one if the 3 major saints.  Minor saints include Thomas Jefferson, Joan of Arc and Winston Churchill.  Quick, think of any other list that includes all three of these names!

Despite the oddness of it, the people at the mass seemed deeply moved and solemn. 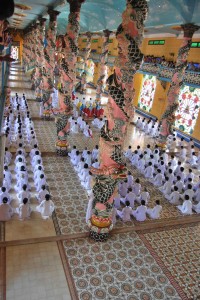 I conclude with one shot of the kids. 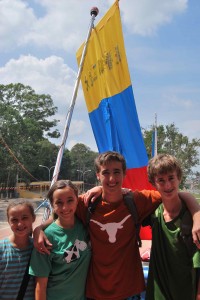