After our homestay with the carpenter/farmer, his family and Cousin McLiquor, we had a travel day.

Were we to cover the same amount of ground in Texas, I suspect that total travel time would be no more than 3-3.5 hours.  Here, in the land of muddy roads, uncertain traffic laws, Ox-led carts, maniacal scooters and countless bicycles we needed both a 3 hour leg and a 4+ hour leg.

Between the two driving segments, we had a nice meal and a 90 minute bike ride.

The meal, like all on this tour, is a homemade meal made entirely with local ingredients.  It also (like all the other meals) seems to be for some other family with 8 children.

As you travel in a country, you can learn about their customs through different methods.  You can read about them.  You can be told about them.  Yet often you observe behaviors enough times to discern what the people believe.

Using this last method, I have deduced that hospitality is critically important to the Vietnamese.  Further, hospitality can be defined as “providing crippling amounts of food” and then “insisting that they eat more”.

For our family of 6, we are typically seeing 7-10 dishes of food plus either rice or noodles.

Even with three ravenous teenagers, we generally cannot eat more than two-thirds of any of these marvelous spreads.

On the bright side, the last several meals have avoided any “happy water”, so we have that to be thankful for.

As you can tell, this day was not particularly noteworthy, except for the bike ride.  Hien does not take us on paved bike paths.  We ride between rice fields, on narrow local streets and across bridges that look to be made with the bamboo deemed too flimsy for household use.

These rides (we will take another the next day) are a great window into the lives of the local people.  They give us a feel for their pace since so many ride bikes.  In fact, the first family we stayed with live+ 9 kilometers (6 miles) from the closest school, so the students ride this distance over unpaved roads twice daily.

We also see the people living.  During our ride, we saw an argument between a woman and her teenage daughter.  I have no idea what the spat was about.  In fact, nor did Hien, as they were speaking in a local dialect.  What I do know is that mom was holding a hairbrush and her daughter started to wail.  Remember when I described the funeral in Kathmandu during which several women were mourning at massive volume levels?  The teen’s howls were equivalent.  I remain completely vexed.  Either mom was just telling her about an arranged marriage to a hunch-back octogenarian or Vietnamese teens are as good as any teen in the world at creating extra drama.

Here are some pictures. 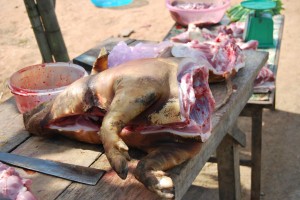 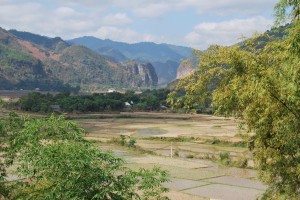 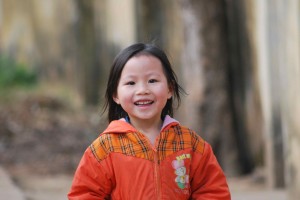 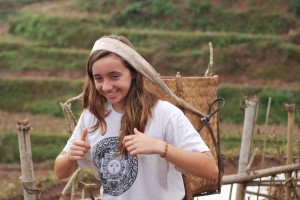 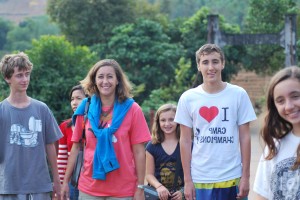 The only other aspect of the trip to report is the fact that Susie and Liam have permanently left their mark in Vietnam.  We found ourselves on a newly cement paved portion of the path.  As we biked on it, I noted that the sections were recently poured.  Within a minute, we came to the most recently poured (and still wet) section.  We saw a young boy walking to the side of the poured area along a section that was perhaps 6 inches wide.  With wet rice fields on either side, the walk was precarious at best.

Never daunted, Liam hoisted his bike and started to walk along the same path.  It turns out that there is a short part of the path that was not 6 inches, but instead 2 inches wide.  It also was sturdy enough for a 10 year-old Vietnamese boy, but not a 15 year old American carrying a bike.

Liam slipped and planted part of his bike in the cement. 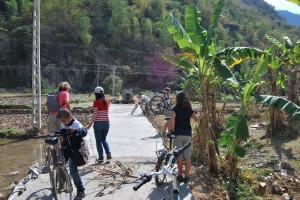 Susie decided to lead her bike on the side of the pour with her bike.  She did very well with the older portion of the pour, but about halfway across, she started to leave tracks as well.

Here is part of their mark. 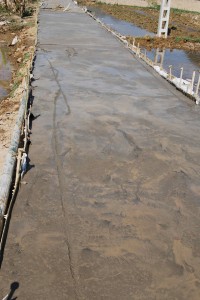 We felt very bad about this.  After I took this shot I was thinking about finding a stick or brick to act as a trowel when a guy in a motorcycle came the other way and went straight through the middle of the pour.

We felt less bad then.

All in all, I loved the ride, but am glad we have the Texas Highways!