Note: I did not realize that we would be without Internet for multiple days during our tour of Vietnam.  As a result, I have combined multiple blogs into one and asked our guide to drop us by an internet café.   Since we are pressed for time, I have only one picture to accompany these articles.  They are forthcoming in 2 or 3 days.  Also, Susie did not get a chance to proof this, so it might have a few errors.  It makes me appreciate both the remoteness of our travel, but also a good internet connection.

We are told that ’beauty is in the eyes of the beholder’, but that gives us way too much credit in creating our own opinions.  The fact is, our idea of beauty is a gift of our culture.  All we need to do is compare the full-bodied figures of Reubens with the skeletal runway models of today to see that the ideals of beauty vary.

As a general rule, most cultures value blemish-free skin and symmetrical features.  Beyond that, beauty is generally “that which is hard to acquire”.  It also can tell you something about the people.

Lets look a suntans as an example.  My grandmother valued alabaster skin - the whiter the better.  This was the standard because white skin indicated wealth and success, it was evidence you did not have to work in the fields.  Tan equaled manual labor.  Now, a nice tan tells the opposite tale by suggesting that you have the time and resources for vacations and travel.

Why were the women of Reubens over weight?  In his day, the average person had relatively little to eat and lots of physical labor, a great recipe for wiry, thin individuals.  Ah, but the aristocrats had feasts and leisure.  Now, the ready availability off inexpensive snacks (full of refined carbohydrates) coupled with effort-saving devices (cars that replace walking, elevators that replace stairs, kitchen utensils replace cutting, blending, and stirring) make us a nation of overweight people.  So the ideal of beauty is thinness.

If it is hard to get, it often becomes beautiful.

This can lead to some cruel practices.  For centuries, the Chinese would block the feet of their daughters to keep their feet small and “beautiful”.  Tribes near Chiang Mai elongate the necks of their women by placing rings around their necks.  They eventually have necks 2-3 times longer than normal with only one small downside – they can never remove the rings.  The rings not only stretch their necks, but they also become structurally necessary.  In other words, without the rings their heads would flop over they would choke.

But, hey, anything for beauty.

[On a contemporary note, it is evident to me that our obsession with thinness is the modern equivalent of neck rings.  We have taken an idea (trim bodies or long necks) and taken them to an unhealthy extreme.  Our obsession with thinness has several unappealing aspects.  Most obviously, it contributes to eating disorders.  It also creates unnecessary self-esteem issues in our young women and even young men.  Further, it creates an ideal that is simply unattainable in a post-pubescent woman.  More and more, runway models look like little girls or boys – no hips at all.  I think this furthers our obsession with youth and undermines respect for elders.  “How can you respect someone that is so fat?”

I am on this tangent because we learned about the ideals of Vietnamese beauty from Hien, our guide for the first few days here.  Traditionally, they value three things from their women.

To summarize.  Halle Barry would not be appealing here.  Odd thought that.

Dr Susie in the House!

I wrote earlier about Susie’s medical acumen.  It came into play once again yesterday evening.

Wiley showered in our room and then started to walk into his through a connected door.  Seconds later, he cries out and grabs his leg.  In my peripheral vision, I decided that he ran into the corner of wood table next to the door, so I assumed he got himself a serious bruise.

He then declared that he was bleeding.  I asked to see it and then saw a clean cut running a full inch across his thigh.  He had run into a table on the other side of the door that had a broken glass top.  It looked like a sharp knife had cut him.  It was not bleeding too badly, but it was a real cut.

Time to bring in Susie.

Her initial instincts declared that he would need stitches.  But she marveled out loud how clean the cut was, and how impressive.

Wiley’s face turned pale.  We had a minor repeat of China as he felt dizzy but fortunately this time was able to lay on a hotel bed rather than a dirt floor in a rural village. I started to think about the logistics of getting clothes on a person with a bleeding thigh.

Susie responded, “I think I have steri-strips.  A few times this summer, we had campers that got cuts that might have required stitches in the past, but the doctor gave them steri-strips instead.”

I am thinking that this is interesting, but irrelevant.  If we do not have butterfly bandages, we certainly do not have any . . .

“And I packed steri-strips!”

Minutes later, Wiley has 5 strips on his leg and he is good to go. 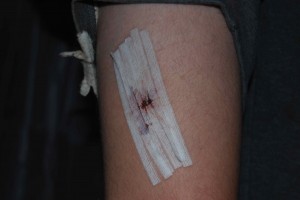 History is a funny thing.  As a young man, I thought history was like science: full of facts that can be known with complete certainty.  There are certainly facts (“Christopher Columbus arrived at North America in 3 ships in 1492”), but there are also massive amounts of interpretation (“the Europeans civilized the barbarians” or “the Europeans abused the native people”).

In college, I took a course on Historiography – the history of history – that woke me up.  We read about the debate regarding slavery.  Some people thought that slavery had become unprofitable and would eventually die out on its own.  Others argued that it was the backbone of the Southern economy.  I saw 5 distinct points of view on this topic.

This trip has provided our children with a massive lesson in historiography at a much younger age.

They say that history is written by the winners.  It gets fun when you have multiple “winners” to listen to.

Take Communism.  We have heard massively varied interpretations from both extremes.

Ho Chi Minh is a clear example of this.  We went to his Mausoleum yesterday.  It was massive.  The visit required reverence from the observers, who filed by the embalmed body of the great Vietnamese Communist leader. [Note: for reasons lost on me, the preserved embalmed body is a favorite of dead communist leaders.  Ho Chi Minh joined Mao and Lenin in this treatment.  It has an odd effect.  In a way, it makes the historical person seem more human – by looking at a body, you are reminded that this is a person.  It also makes the person seem super-human – the structure is imposing and staffed with roughly 50 guards wearing white uniforms.

It is also kinda creepy.]

We then learned about his victories and his kind acts.  I will not detail all of them here, but if you bought everything that we heard, you would leave thinking this man was like George Washington combined with Ghandi, only better.

Hian, our guide, said that “he made just 2 mistakes”:

A quick Wikipedia search suggests some different possible truths.  He may have married in 1926 and had a child in 1956.  The people of Vietnam were not as unified under him as the tour suggested.  It is worth noting that the “truth” of the Vietnam War is terribly difficult to tease out.  I can describe the extreme views.

On one side is the US view from the 1960’s.  Communism was the scourge of the globe – a cancer that might engulf and destroy the world.  The USSR and China were spreading Communism and the US and NATO must stop it at all costs.  Ho Chi Minh was a tool of the Chinese that was leading the fine people of Vietnam into a horrible system.

On the other side is the official line of the current regime in Vietnam.  They saw Capitalism from the eyes of an exploited colony.  France had used them as an ATM: “make us tobacco, make us rubber”.  During the French rule over 10% of the people died of starvation (2 million of 19 million) right after WWII because the French shifted agricultural production to rubber and away from food.  The Vietnamese resented the foreigners running their country.  Ho Chi Minh was a Vietnamese patriot who led a legitimate rebellion against their exploitative oppressors.  He was a communist because Capitalism was corrupt and exploitative (as they had experienced it).

We visited the Hai Lo prison (the “Hanoi Hilton”) yesterday.  This prison is known in the US as the site where captured US pilots were held as POWs.  It is also the place where John McCain experienced terrible conditions and torture.

The prison had another function before the Vietnam War – it was the sire where the French-led government incarcerated political prisoners who were Vietnamese who attempted to overthrow it.

The museum did an excellent job enumerating the various atrocities and mistreatments of the Vietnamese political prisoners at the hand of the French, but was rather mute on the treatment of American pilots.  Actually, that is not accurate.  According to the museum, being a POW in the Hanoi Hilton was just slightly less fun than a trip to Disneyworld.  They celebrated Christmas, played volleyball, competed in chess tournaments, wrote cards and even translated the poetry of Ho Chi Minh.  I have no doubt that there were great moments, but there were also terrible ones (as McCain’s book details).  When some Americans in an adjacent group asked their guide about McCain’s torture, he responded that McCain was shot down and saved by some Vietnamese (true) and spent many months at the prison (true).  “He, however, was never tortured here, he made that up.”

This statement came with no explanation as to why a person would fabricate such a story.  McCain creates a bit of a challenge for the museum.  He made it famous and a huge number of visitors are Americans.  They have his flight suit and feature photos of him being saved in the 60s and him visiting a decade ago.  Badmouthing McCain is clearly not on the agenda.  But they also do not want to admit to any ill-behavior at all.

I picture a conversation with the curator.

Me: “Senator McCain claims that he suffered multiple torture sessions that left him permanently unable to use his left arm.  Do you think he is a lying?”

Curator: “We did not torture, but he is a good man.  Perhaps he got confused.”

Me: “About bone-crushing pain?”

Curator: “They had some vicious games of volleyball.  Maybe that is what he meant.”

Heck, anyone can make that mistake.