Bears, Waterfalls, Fondue and a Tangent on Commerce

Yesterday, I mentioned the fact that one van no-showed on us and that we spent over an hour attempting to arrange another.

I would like to continue the story.  It has two offshoots: the beautiful and the amusing.

The beautiful was the location we went to.  About 15 miles outside Luang Prabang are the Kouang Si waterfall and a bear rescue facility.

No, that does not make sense to me either.

Before I tell you about bears and waterfalls, please allow a tangent on Laotian vendors.

As we drove out of town, I was struck by how quickly the economy transforms from a tourist-centric to native-centric.  In the main section of Luan Prabang (next to the Mekong River), every store is geared to the tourist.  Menus and signs are in English.  A typical block looks like the following: 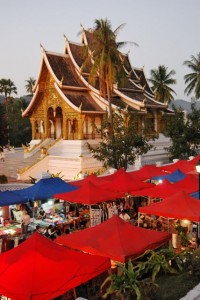 Now essentially all vendors sell items sourced from the same 10-15 producers.  There is the occasional surprise and/or interesting item, but the offerings are not as various as 225 vendors might suggest.  You had sellers of silk, purveyors of prints on papyrus-like paper, marketers of masks and hawkers of horrid hooch.

This final group really got my attention.  As I approached these stalls, I saw a wide array of bottles.  As I got closer, I noticed that they were not exactly typical bottles.  They had Laotian rice whiskey in them.  Laotian rice whiskey is the answer to a question that no one should ever ask.  But it was not the low-grade liquor that catches the attention.  It is the cobra inside of the bottle – hood open and biting its tail – that grabs you. 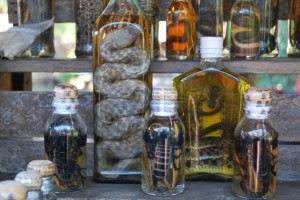 You then see scorpions and smaller snakes in the smaller bottles. 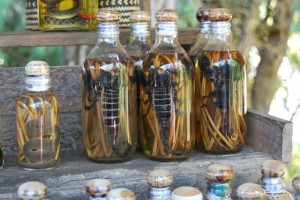 But once we left the main road, the stores were entirely geared to natives.  The signs were now entirely in Laotian.  People ate on the ground.  You hear that the key to real estate is “location, location, location”.  Few towns made this point more clearly.

Once at the waterfall/bear facility, we had a blast.

We saw some playful bears.  The facility likes to challenge the bears by hiding  sticks covered in honey and fruit. 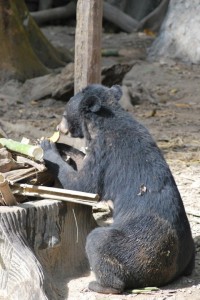 I guess this simulates hunting in the wild, if the wild also had supercool hammocks in them. 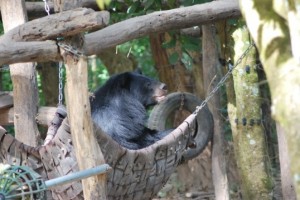 We say moon bears (so named because of the white crescent on their chests) and sun bears. 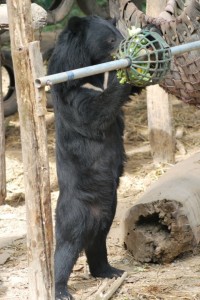 On the way out, they had a display of models showing the relative sizes of bears.  Liam made a friend. 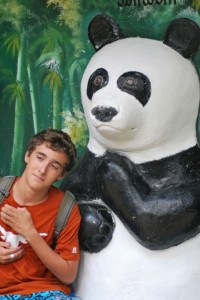 From there, we walked to the falls, which began as a series of beautiful turquoise pools with small falls coming into them. 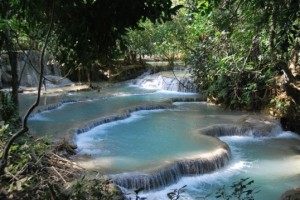 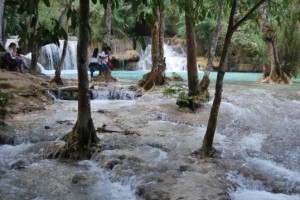 Our crew was incredibly fond of the swimming hole which included a rope swing, so our Camp Champions skills came in handy.  The water was very brisk (probably in the 70’s), which induced some interesting post-swing yelps. 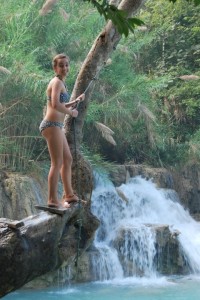 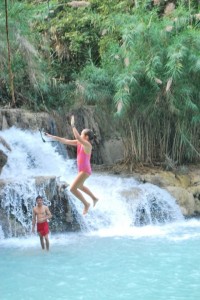 After our swim, we walked up to find some other pools, minor falls and a café. 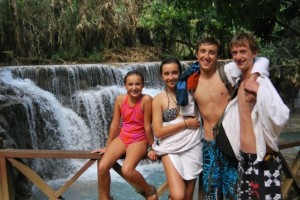 We did not know what to expect, so we thought that we had seen everything at this point.  In fact, we almost headed back to our van.  We were running kinda late and we wanted to catch another swim.  Nevertheless, we kept walking and came upon a truly beautiful waterfall. 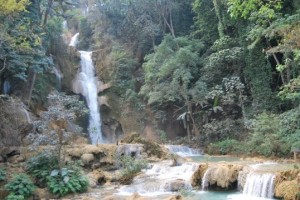 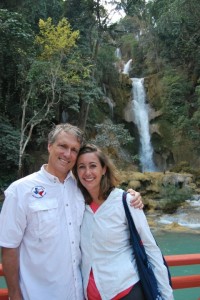 We climbed to the top of it.  I do not know why.  It was slippery with no steps and not that pretty.  Climbing is one of the things that we just do.  I think Nepal has imprinted that on us.

We were now really running late. 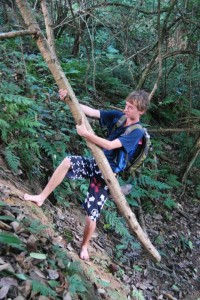 We sped down the hill and returned to the base of the waterfall to find that the sun had come out and backlit a flowering tree.   It created one of my favorite pictures for the entire trip. 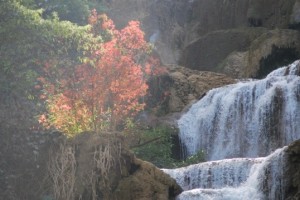 We concluded the day with a return to the restaurant we enjoyed on the first day. 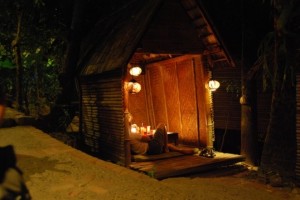 We crossed the bamboo bridge and decided to have “Laos Fondue”, which is a version of the Chinese hot pot.  They out burning coals in a pot in the middle of the table and put a metal piece above it that serves as a soup-making, meat grilling device.  We had a grand time. 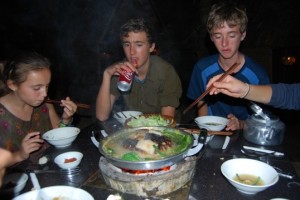 We are now back in Thailand in Chiang Mai.  Here, we will see elephants and tigers up close.  We are very excited about it!  We also saw this sign.

I think this might be one animal act that we miss.

PS  Liam is holding Susie’s favorite device in the world. 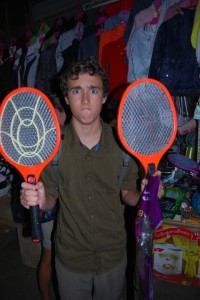 For me, I deeply appreciate the technology of Apple products.  Not Susie, Her favorite breakthrough in technology is not the smart phone, but these paddle-like mosquito zappers.  They spark and burn mosquitos (usually 2-3 zaps is all it takes).  I never guessed that my wife would be seduced by a bug zapper!