As I have documented, there is a superstitious streak in the Vietnamese people.  One of the most important beliefs regards the fear of evil spirits and the protection of the home.

In any event, Susie stepped on the threshold.  We think we heard a gasp.

Without plumbing the exact details, lets just say that Susie escorted some evil in with her.

Since we were arriving at this homestay at Tet (Vietnamese New Year), the family was paying special respects to their ancestors.

Before I complete this story, I should note that the home that we stayed in was exquisite.  Built in 1931, it features wood carvings, a remarkable shrine and furniture with mother-of-pearl inlays. 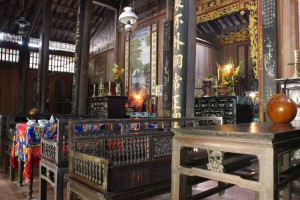 The current generation is the seventh to live in this home.   The home exuded sense of place that made us almost expect to see the ancestors join us.  In fact, we only had to step outside to ask them as they were all buried in the front yard. 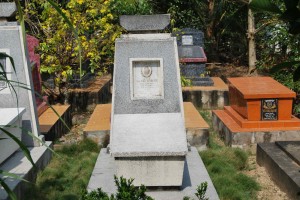 This illusion might have been fed by the fact that two tables were set for dinner (exclusively for the ancestors). One table was set for dinner, the other for tea.  The second table had a beautiful flower arrangement in a ceramic vase. 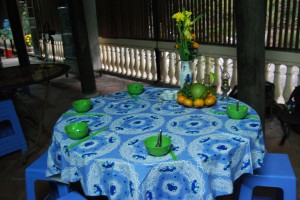 As Wiley was leaving, he saw that his path was blocked by our luggage, so he decided to take an alternative path to the door that went between a column and the ancestors’ tea table.

He cleared the span, but then forgot the fact that he was wearing his backpack, that then clipped the ceramic vase and hurled it smashing to the ground.

If you know Wiley, you know that he is the child who suffers the most in these situations.  The other children might be tempted to deflect the blame, but not he.  He owned his error.  In fact, he looked at me as if had played hacky-sack with our hosts’ great-grandparents.

Happily, the vase turned out to be a standard issue item available in any market, not an heirloom.  We were also happy to learn that our hosts have a generous spirit and quickly forgave us all.

Life Among the H’Mong

On the eve of Tet, we ate with Zu, our third and final guide.  She is a lovely woman from the north of Vietnam who is Black H’mong (one of the 53 minority ethnic groups in Vietnam.  Until last night, these groups were just names and clothing styles to me.  Their names (White Thai, Green H’mong, Black H’mong) refer to their distinct ethnic clothing.

As we ate, I came to understand that the differences can be quite distinct.

The Black H’mong have a tradition that baffles and even offends.  They remain the one minority that still practices this tradition.

I am not talking about arranged marriages; many minorities still have these.

During festivals and market days, a single man who finds a young single woman he likes can execute a “kidnap”.  He gets his friends together, surprises the woman (usually 15-18 years old) and with the help of his friends, takes her back to his home, regardless of her wishes.

Let us be clear, this is not a chivalrous charade between two people with a mutual interest in each other.  This is a guy summarily choosing an unsuspecting girl and taking her without permission from anyone.  The parents are no more aware than the victim.

Once kidnapped, the girl must remain with the man for 3 days and 2 nights.  On the first day, the man cooks for her and attempts to earn her affection.  That night, she will sleep with a sister or female cousin.  On the second day, the courtship continues.  The day ends with the woman expected to sleep with the man.  She can refuse, but this choice is still not ideal.  Even if she refuses, all the villages assume that she slept with him and is, essentially, ‘damaged goods’.

At the end of the three days, she returns to her village.  She can accept the marriage invitation or refuse it.  Of course, the latter has real consequences.  First, she is assumed to be no longer “pure”.  Second, if she is kidnapped a second time, she cannot refuse the proposal at all, so she could do worse.

I was aghast as I heard about this tradition.  To be honest, is sounded like something from Braveheart or 17th century China.  But this is happening in 21st century Vietnam.

Zu admitted it was dangerous for her to be in her village at Tet, their New Year festival and the most popular day for kidnappings.  She shared the details of her somewhat harrowing near-kidnapping 7 years ago when she was 15.

It involved several tactics.  The first was remaining in an internet café for 2+ hours once she realized that the young man who want to “talk” outside was accompanied by a dozen of his nearest and most inebriated friends.  The second was knowing that at the boys would have a midnight game of street hockey that would deplete the ranks of the abductors.

Finally, she pulled the tradition card.  After using the most modern venues as her first line of defense (the internet café), she appealed to the spirit of tradition.

Without his friends in tow, he was still larger and more physical than she.  He did not join the street hockey game, so he was still there when she emerged from the café as it closed.

She saw an opportunity in her modern attire.  Knowing that he would be taking her back to his home, she said that she wanted to go with him, but would vastly prefer to wear her traditional Black H’mong attire to meet his family.

She then went to her apartment with a friend.  Unfortunately, another “friend” was paid by the boy to reveal her location once he realized that she was not returning.  This now-former friend led them to the apartment where they almost smashed the door in.  She jumped out the second story window and hid outside until around 3AM until the groups left (due, I assume, to a lack of beer).

I am no marriage counselor, but this sounds like an inauspicious first date.

Seriously, I was aghast and open-mouthed as she described this ordeal.  She is 22 (too old for kidnapping now!?!?!) and is telling about something that happened in 2006.

Stories like these make me deeply conflicted.  For most of our trip in Asia, I have been fascinated and even charmed by the minority people of China, Nepal and Vietnam.  I have bemoaned the fact that their lifestyles and traditions will soon fade into memory.  As TV and the Internet expand, cultures become more homogeneous.  I mourn the loss of ethnic identity.

But I suspect that the romance of these ethnicities is easiest when you see their attire and watch them smile than when you really examine their traditions.  Most undervalue their women (there are some matro-centric groups, but they are very rare indeed) and they have some brutal practices.  While the ‘kidnap’ might be among the most offensive, I suspect that there are many more terrible ones.

Also, none of the minorities seem to value education.  Personal improvement not emphasized.  Instead, the village expects its children to remain at home and practice the vocation of their parents, be it fishing, farming or weaving.

It seems like a high cost of human potential in exchange for cultural diversity.

Yet, on a final note, these people seem generally content, more so than most people that I see in our culture.  Are they deceiving themselves or could our culture be slightly off-base as well?  Have we become so focused on the individual that we have under-stressed the importance of community and group-identity?

I do not know.

Before I get any more philosophical, let me end this blog.  We will be ending our visit to Vietnam in Ho Chi Minh City (Saigon) for 3 nights.  More on that as it happens.