We have arrived in Granada and I have much to report on this city, but not today.

Before reporting on the city of the Alhambra, I feel a need to provide a little transitional information for you.

My first addendum is about Andorra. Recently, our son Liam was exchanging emails with one of our long time campers named Grant.  During the last couple of summers, Grant has been lobbying me to annex Camp Champions and create a separate country.  After a little research, he decided that we should not be a country, but a principality.  Those of you who read my article about Andorra know that it is doing very well.  If you also check out Lichtenstein, you see that being a principality has served them pretty well, thank you very much.  [Lichtenstein is smaller than Andorra, is in the Alps and is the 2nd wealthiest nation per capita in the world.]

When Liam told Grant that we were in Andorra, he responded with fake ignorance, “that’s in Africa, right?”  Liam missed his humor and corrected him.  Grant responded by sharing this fake news story from “The Onion”: http://www.theonion.com/video/nation-of-andorra-not-in-africa-shocked-us-state-d,14211/

My second addendum is about Valencia, where we we spent a single night.  Known for its oranges, Valencia is the third largest city in Spain.  We chose it as it was simply the most interesting stop between Barcelona and Granada.  I was planning to say little about Valencia, but I cannot resist sharing three observations.

First, Valencia has a unique type of bum: the Parking Bum.  I saw four of them there in less than 18 hours and none anywhere else.  Here is the drill.  They spot intrepid drivers in search of parking spots.  They then help with the search.  At first, I thought this was the first cousin to the guy who washes your windshield without you asking and then looks at you expectedly.  In fact, I saw one that stood next to a spot that the car saw first and then asked to be paid.

But all Parking Bums are not created equal. I have also seen true acts of service.  Kenny and the family were in dire need of a place to park near our hotel. As a reminder, Kenny is our red Volvo.  We have taken to talking about him as the 7th member of the family or 8th member counting Fenway the Basset Hound.

Let me be clear, when you have 6 full backpacks, 6 daypacks and 5 miscellaneous pieces, you do not want to walk long.  We will pare down our load when we lose Kenny in 5 days, but now we are traveling a little heavy.  As a result, being an extra 2-3 blocks from your accommodation can make a difference.  Sometimes, the closest parking garage is almost a mile away.  So you strive for street parking.  In Spain.  This does not seem like much of a challenge, but I assure you that it is.  To put this in context, let me share the following phrase on Spanish city travel sites: “We do not advise driving, but if you absolutely must . . .”.  I have read this phrase at least 3 times for each city we have visited.  Reading between the lines, here is what they mean. “We assume that all drivers in Espana are certifiable masochists for whom lemon juice in paper cuts is not sufficient.  Since you cannot otherwise create suffering sufficient to satisfy you bizarre longing for pain, I have decided to drive in our fair Spanish city.  Here is advice for you, despite the fact that I should be giving you the number of a good psychologist rather than these parking tips.”

So Susie, Kenny and I were looking for a spot.  We saw one car pull out, but we have learned that there are spots that are reserved for residents only that are NOT to be trifled with.  As we passed this newly freed spot, we saw a mildly frenetic man with missing teeth waving at us.  As a general rule, we avoid people fitting this description.  This drive was no exception.  We drove past, spotted our hostel and parked temporarily in a prohibited spot.  Out of necessity, we have perfected this technique.  We park briefly where it is convenient, but illegal.  The kids and I start a frantic process of unloading and checking into our hotel.  Susie (often accompanied with Virginia) remains with the car.  There, they employ one of two basic strategies: a) explain in Spanglish that she is waiting for her familia to check in, b) break into tears and make the authority feel sufficiently uncomfortable so that he/she leaves.

While parked there (and while most of us were in the hostel), the same person that had been waving before approached Susie and started to speak in broken English.  He said that her spot was illegal and that he had a better spot set aside for her.  It was around the block and directly across the street from the hostel. After much insistence, we gave it a shot.  The spot itself was short.  Really short.  It took Susie 5 minutes to parallel park.  You may assume that the length of this effort reflects timid parking skills from Susie.  Not at all.  She learned to drive and park in Boston, MA – perhaps the least parking friendly city in the US.  I have seen her fit a car in a spot in violation of at least one law of physics.  The spot she fit Kenny in was only 16 inches longer than the car itself.

I kept asking, “is this spot OK for non-residents?”.  He had a go-to phrase.  “No problem.”   This phrase usually came with some foodstuff escaping from his mouth as he spoke.  I felt awful for him.   He was a victim of non-existent dental care and was (at roughly 40 year of age) devoid of any of his front teeth.  While I felt bad, I was intent to avoid the spray of . . . bread/cheese/???  . . . emanating from him.

He clearly communicated that Saturday was free.  I asked, “What about today (Friday)?  How long before it becomes free?”

As you might have guessed, his instructions were less than complete.  There was 90 minutes before parking became free.  We got a ticket.  But I still appreciate his desire to help.  I hope he is doing well now.

My second observation comes from my inner architect.   Valencia has created an amazing arts and sciences area.  Let me share a few pictures and then go forward. 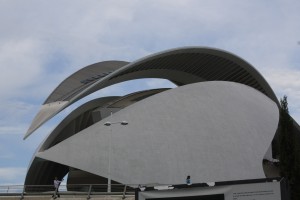 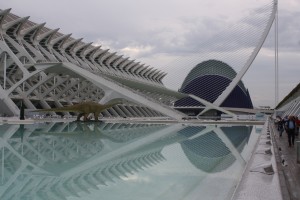 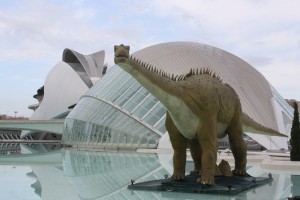 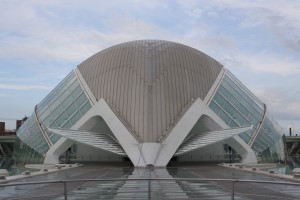 Finally, we visited a church in Valencia that hammered home a point that has been germinating in my mind for a while.   Many European Catholic churches built in the middle ages and soon thereafter really focus on the suffering aspect of Christianity.  The Passion of Jesus is huge.  Martyrs are everywhere.  A few images show up a lot.

Wiley has started a “San Sebastian” count.  San Sebastian was a saint that was shot with arrows as part of the persecution of the Christians under the Romans (prior to Constantine converting the Empire to Christianity).  You see lots of Sebastian.  Wiley’s count is around 27 from churches alone.  That count reflects “pictures of Saint Sebastian”, not “arrows in Saint Sebastian”.  We do not have a count for that, but are estimating it at 105-120.  [Note: Saint Sebastian did not die from the archery exercise.  He was healed by a woman who also became a saint.  His ultimate fate?  He was clubbed to death.   Not a great month for Sebastian.]   Oddly, San Sebastian paintings are so ubiquitous that I have not bothered to take any photos, so please take my word for it.

The other motif that appears in many churches (to the disturbance of many a mother) is the “Slaughter of the Innocents”.  This depicts the order of King Herod to kill all the young male babies in an effort to kill the newborn Jesus (who Herod had heard prophesized about).  Infanticide is indescribable, but that does not stop efforts to depict it frequently.

Here are a few pictures that show some of the fun you can see in a visit to these houses of worship.

In the main church in Valencia, we got some great martyr paintings.  Here is the best in that church.

But sometimes, paintings are not quite enough.  At these times of need, the occasional skeletal remain comes in.  We did not have a tour and the signs were scarce, but I can report with certainty that this is a human forearm and hand. 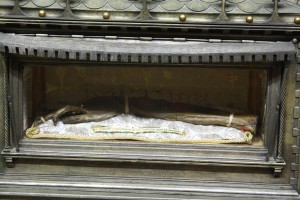 Tomorrow, I will report on Granada and share a couple of amusing kids stories.  Until then, imagine a situation where late night revelers run into early morning travelers.  Answers in tomorrow’s blog.