I started to become aware of international politics in the 1980s.  In addition to being the decade that gave us marginal musical acts, it was also the decade that the Soviet Union cratered and the Iron Curtain was lifted.

I share this because when I was first starting to understand the world, the Soviet Union was in obvious decline.  They failure in Afghanistan had signaled the end of their military aggressiveness and dominance.  I could see all that and I believed that they truly wanted to modernize and become less belicose.

Meanwhile, my father would shake his head in a resolved and frustrated way and say that the Soviets cannot be trusted and that they are intent on world domination.  I thought that this seemed thick-headed and reactionary.  Of course, I had that rare wisdom that comes from little to no experience, so I was quick to point out the weakness in his thinking.

After going to the Museum of Terror today, I understand my father so much better. 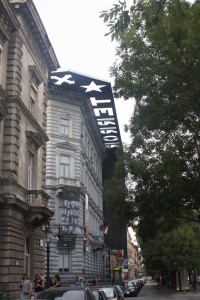 The Museum of Terror sits in a building that was used by the Nazis in WWII and by the Soviets after 1945 as the central interrogation and police headquarters.  I am amazed that both organizations used the exact same address, but they did come with basements that have nasty and ruthless jails, so I guess it makes sense.

The museum is very impressive.  It uses video, sound, slow elevators, great design and superior story-telling to convey the suffering resulting from the occupation of these two hideous regimes.

Yesterday, I suggested that it is not fun to be the small land-locked pawn in European politics.  I now see that I was more right than I had thought.  We learned about elements of the Holocaust, relocation of wealthy businessmen and farmers, torture for politic incorrectness and the destruction of a vibrant economy.

In particular, I came to understand the human element and the historic element.  And I came to understand my father better.  While I grew up with Gorbachev and Perestoika, he saw Stalin overtake Eastern Europe and slaughter millions. He saw a country intent on growing across the entire world that was also overtaking us technologically - using information acquired from us using spies.  Where I saw weakness and hope for reconciliation, he saw manipulation and a complete commitment to domination.

I had not seen the swallowing of Eastern Europe.  I did not watch great countries lose control of their nations.  I was not there when no country aided the Hungarians in 1957 or when Sputnick proved that that Soviets could do more than lust steal technology.  I know understand his point of view so much better.

It makes me wonder which of my world views will come in conflict with those of my children.  Will we resolve them well?  I hope we do not have to wait 3 decades for clarity like I did.

Tomorrow will be less political and more fun.  I just wanted to share this epiphany,