They Stole Our Names!

After walking around Rome for a very full day, we have learned many things.

First, apparently the founders of Rome have stolen a huge number of names from Camp Champions!  They have a Coliseum, a Forum, and a Pantheon (but no Parthenon).  I have read that the Roman Civilization was famous for adopting aspects of great cultures, especially Greece, but I did not expect to be on the list too.  Their mimicry did have some limit.  We did not see an Ill Eagles Nest or a Fillin’ Station, so I guess they have some shame.

[What’s that Susie?  They came FIRST?  Are you certain? Absolutely?]

Readers - you can disregard my mini-rant above.

I am excited that I have enough internet to actually post some shots.  Here are two pics from the Coliseum - one of our four Gladiators and one at night. 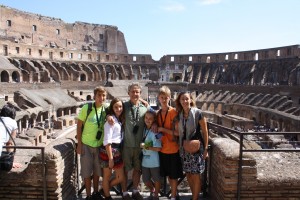 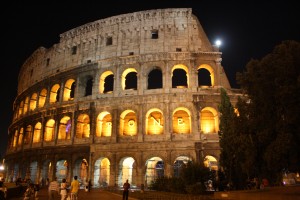 Second, we learned once again that Romans are fantastic hosts.  Amelie (our Roman 14 year-old camper) took 5 hours to be a fantastic tour guide.  This is her last weekday before her school starts, yet she chose to spend it with 6 wayward Texans.  He she is in front of Trevi Fountain.

This fountain shows so much of what is great about Rome.  It is carved by the master sculptor Bernini, so it is exquisite in its quality.  It is huge (85 feet tall).  It is playful - Bernini makes it look like it is bursting out of the building behind and has added 24 separate water spouts.  Perhaps best of all is how people interact with it.  In addition to the swarm of tourists, we saw Romans gathering, talking and cooling themselves (unlike Texans, they are not used to 90 degree heat).

As I said, the Romans are really friendly.  We met Maddelena (mentioned yesterday) for a drink and Amelie’s mom apologized at least 3 times that she could not be our personal tour guide.   So nice.

We also saw a wonderfully Roman sight.  We were walking in a narrow one way street.  In the inner city, cars and walkers have forged a reluctant, but functional co-existence.  The walkers stare briefly at any approaching car, provide a mandatory expression of mild disdain and then move from the middle of the road to the side to allow the car to pass.  The diver then slows down to pass while maintaining an expression of indifference to the pedestrians.  One of our drivers, however, tickled Susie.  She was a beautifully preserved Roman of indeterminate age.  She was extremely fashionably dressed.  As she drove, she was talking on a bluetooth headphone.  Both hands were off the wheel as she gesticulated passionately and rapidly - passing pedestrians as she went.

I love the aerobic exercise that is Italian communication.  I suspect that a handcuffed Roman is a mute Roman.  There is something about the language that seems to require hand gestures.  When our hosts talk to us in English, they gesticulate only 15-20% as much as they do when they speak their native tongue.

My final lesson is about our children.  I have often noted the following truth of parenting - since we see our children everyday, we miss their growth.  Parents tend to think of their children as being 18-24 months younger than they really are.  When combined with the fact that THEY think they are 18-24 months older, this creates some real issues.  Today, I got to see their growth and update my mind.

They have real endurance.  We often walk over 8 miles and stay on our feet for 10+ hours.  They complain so little that I am just now noticing how little they gripe.

They are good learners.  They do not retain everything, but they are learning tons.  They are also synthesizing ideas from different history lessons or art works.  The boys have drawn parallels between the Habsburgs and the Romans.  They will see a painting and say that it reminds them of something we saw weeks ago.

Finally, they are showing great attitudes.  Last night we asked them for their “wows and pows” (highs and lows).  We ended up with over 10 “wows” and only one “pow” (we get tired at the end of the day).  After years of being a camp director for years, I have come to the conclusion that most problems are like mid-sized rocks.  They are too big to ignore, but not so big that they are overwhelming.  We then have the ability to make the rock a pebble or a boulder.  I know people who make every rock into a bolder.  The individuals who thrive make their rocks into pebbles.  There are days that our children find fields of boulders, but lately they have been seeing only pebbles.

In case you do not believe that they are growing, I present this pic as evidence: 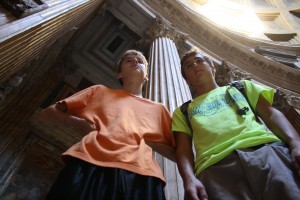 We are now off to the Vatican.  After today, we go to Florence for a less frantic week, so today will be crazy!