This will be a shorter entry today.  Not because yesterday was uneventful, but because it was too eventful.  We woke early, walked almost 2 hours from our apartment near the Coliseum to Vatican City.  We were on our feet for 7 hours and than drove 4 to our next location.

Our stroll took us past a wide array of sites that helped exemplify the odd history of Rome.

Frankly, I was somewhat surprised by several revelations of Rome’s history.  It seems to break into 3 or 4 clusters.

Rome started as one of many city-states in what is now Italy.  It was part of the Greek Empire and not particularly significant.  Around 200BC, they got serious and started to become a major military power.  Around 80 BC, they won The Social Wars (I know, sounds like something form “Mean Girls”) and declared all people on the Italian peninsula to be Romans.  Their success had two complimentary components:

This was the time of Julius Caesar and Caesar Augustus, who ruled around the time of Christ.  This was pretty much the peak for Ancient Rome.  It has 1-2 million people in it.  After this peak, things started to get worse.  The leaders became more corrupt, the army became more mercenary and the benefits of Roman Citizenship faded.  These factors, a lot of barbarians and some plagues left Rome with around 15,000 citizens in 1350.  I find this astonishing.  I cannot think of any other example of a city going from the largest in the world to essentially nonexistent.  I am sure there are certain Mesopotamian cities that this happened to, but I still find this notable.

Rome, however, did not become irrelevant because it always remained the seat of Western Christendom.  When the Renaissance began, Rome (and Florence) were in the middle of it. Caravaggio, Raphael, Michelangelo, Bernini and other geniuses were here, funded by Popes and Medicis and others.  The economy flourished and the city started to rebuild.  By 1626, St Peter’s Basilica (the largest in the world) is consecrated and contains the greatest architectural and artistic accomplishments of the western world.  The city now has 8 times more people than at its low point and things are looking better.

Here is the little factoid that is most surprising to me.  Italy as a country did not exist until 1870!  Also, the different people of the Italian Peninsula spoke meaningfully different dialects/languages.  After a series of battles, they people of Italy decided to unify and choose a unifying language.  They got together and chose not the language of the most successful area, but the one most pleasing to the ear - how wonderfully Italian.  Thus Italy and Italian came into existence after the Civil War.

Here are a few pictures from our day at the Vatican.  First, here is a statue.  Look closely, it is NOT a dude-on-a-horse.

This is a woman on a horse. She is the wife of one of the generals that helped unify Italy in the 19th century.  During a critical battle, her husband’s army was overwhelmed, so she grabbed their 2 week old son and rode off to safety.  This sculpture shows the exit.

The second picture shows our Vatican tour guide.  Yes, she does look like former Champions director Stella Somaska.  She even acted like Stella Ma’am.  It was almost hard to listen to her insights as I kept waiting to hear inspection announcments. 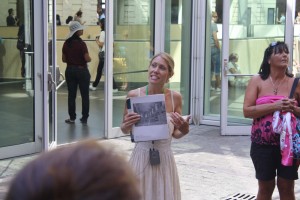 Finally, here is a picture that ties into a little Champions tradition.  This man, Laocoön, was a prophet in Troy that warned his fellow citizens to “avoid Spartans bearing gifts”.  The goddess Athena really hated the Trojans and did not want anyone to listen to Laocoön, so she sent serpents to kill he and his two sons.  He does not look like he is having any fun here. 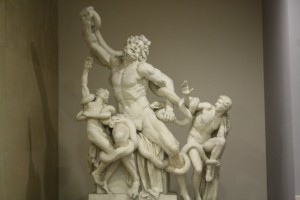 We are now in the Tuscan countryside for several days of recuperation.  We are relaxing, digesting all that we have learned and catching up on our journaling.  Not a bad place to do it!