We visited two museums today: the Prado (considered by travel-guru Rick Steves and many others as the greatest museum for paintings in the world) and the Museo de Jamon.  OK, the second (the Museum of Ham) is actually a restaurant, but it was quite a good restaurant and after 5 hours in the Prado, it was much appreciated. 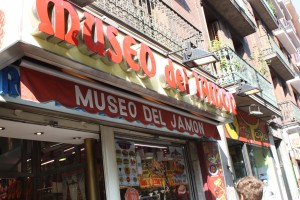 I remember loving the Prado when I was here in 1991.  I, however, was worried that my return would be terribly anticlimactic, especially given that I would be with children this time.  It is a big museum that is not absorbed easily. My concern, however, was unfounded.  The paintings in the Prado have something for everyone.  Almost everything is a masterpiece.  Many are massive and almost overwhelming.  Others delicate and subtle.

We saw Bosch’s “Garden Of Earthy Delights” which looks like the combination of Dante’s concept of hell with the works of Dr Seuss.

We saw several works by Rubens that were over 300 square feet that featured celebrations of cellulite.  Since Rubens painting in a time of food scarcity, fat was considered  a sign of prosperity and beauty.  His nudes must have been very wealthy as they are plenty plump - and always naked.

We saw works of El Greco, Velasquez, Picasso and (my favorite) Goya.  I will resist writing too much about Goya, but he was a truly remarkable genius.  He painted members of the royal family the way that they actually looked.  This created some real problems.  Let me explain why.  In order to maintain the integrity of the royal lines, inbreeding was practically a hobby in the court.  As a result, the family members were, to put it delicately, not pretty people.  Previous royal painters were willing to do the portrait equivalent of airbrushing.  Not Goya. Not only did he paint their features truthfully, he also suggested their personalities (henpecked, pompous, vacuous).

He later became one of the first to paint political commentary.  This painting suggests the pointlessness and cruelty of war after a group of Spaniards were executed by some of Napolean’s men. 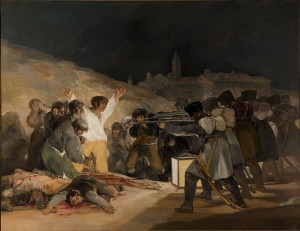 Later in life, he went into the “Dark Period” where he painted his nightmares.  Here he paints a lone dog sinking into quicksand, just as he saw civility sinking into modernity. 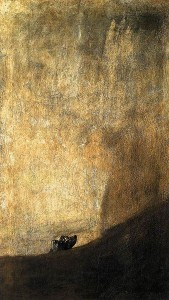 This final one is the most famous of this period. It portrays Saturn eating one of his children.  A prophet told Saturn that one of his children would supplant him, but he did not want that to happen.  This was his strategy to deal with that prophesy.  For the record, I would have gone with Plan B - regardless of what it might have been. 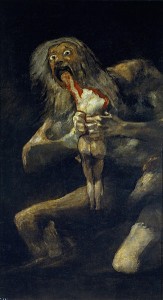 After our day of culture, we returned home, put the kiddos to bed and went to a cafe/bar across the street to meet two dear friends from graduate school.  Julie and Rob Hill are two of the really special people we know.  Julie was a biz school classmate with me.  She and Rob moved to Madrid soon after graduation and they have called Madrid home since.  They, like us, are masochists with 4 children (2 older boys, 2 younger girls and a set of twins).  The only meaningful difference between our family and theirs is that their twins were the final two rather than the first two.

During our conversation, we learned a couple of interesting tidbits about Spain.  First, while we in the States are often frustrated at our schools, the US is doing better than most of Europe.  Once the conversation tilts to college-level work, the US is by far the best.  The European system does not value athletics or extra-curriculars.  Essays have nothing to do with school admissions.  Instead, grades and standardized tests are all that counts.  This discourages ambitious children from leading or competing.  Also, many schools in Spain remain focused on rote memorization rather than processing skills - this is exactly the wrong approach for the 21st century.

Also, some of the curriculum is bizarre.  I understand the importance of music to brain development, but I am baffled at a class that requires 13 year old boys to play the recorder and only the recorder.  Strange and non-productive.

The second conversation that I think you might enjoy has to do with Spanish traffic.  Remember all the stories about driving insanity I have shared?  Apparently, Spain in currently in an age of moderation and sanity.  Just 4-5 years ago, cars would triple park.  The driver would just put on the emergency blinkers and walk inside.  These blinkers have a magic, it not truly transformative power - kinda like an ambulance horn.  Even today, cars will stop in truly inexplicable places with no other explanation than the emergency lights.  But 5 years ago, this would include triple parking (thus blocking all one-way traffic).  The shopper would simply keep an ear out for a honk or two (indicating that traffic has stopped), then run out and move the car.

Until 2-3 years ago, there was not cumulative point system to punish multiple offenders for moving violations. The introduction of such a system a few years ago has curtailed massive red-light-running and crazed speeding.  While talking with the Hills, they said something ominous - “the cameras have made all the difference.”

“They have radar cameras for speeding and red light cameras for running lights.  You will drive happily for sevarel days only to find that you have 4 tickets going through an area that you thought had not cameras.”

“So we might get some tickets in the mail?”

“I would count on it”

My favorite takeaway is the fact that the traffic is currently considered mild.  I guess the average Spaniard was a true madman - now he/she is just addled!