Yesterday was a full day.  After a few relaxing days in Tuscany, we decided to cover a little ground.

Yesterday’s agenda was to visit Pisa and then head to the medieval city of Siena.  This plan was conceived in the mind of a Texan.  I can read a map and convert kilometers to miles.  I also know what an ambitious person can get done on the roads of Texas.

Our plan today would be like leaving Austin to visit Fredericksburg, then San Antonio and then back to Austin.  Not a hard drive.

At least not in Texas.  We, however, should note a few of the differences in Italian roads versus Texas roads.

So we drove until we reached Pisa. Frankly, I was initially reluctant to go.  It was a long drive and we knew it would be the Land of Busses and Birkenstocks (i.e., mass gathering of tourists).  I tend to relish the undiscovered when I travel.  I doubt there is anything undiscovered in Pisa.

Yet our visit to the city was delightful.   The oddity of walking up a spiral staircase in a leaning building is very memorable.  The kids thought it was a blast.  They loved the worn steps, the narrow passage and the odd feeling of walking “down” stairs that are going “up”.

It is worth noting that this tower is REALLY leaning. 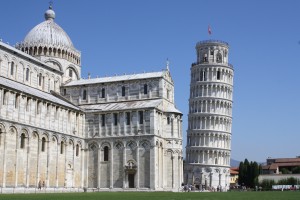 They also enjoyed torturing their mother.  Susie has a very distinct memory of the tower from 20+ years ago.  It made her extremely uncomfortable.  It is worth noting that Susie is a fan of safety who has a healthy respect for heights.  When she ascended the tower as an 19 year old, she did not like it.  A little subsequent research reveals that the tower was leaning more 20 years ago.  It was closed for 11 years to straighten it slightly and to stabilize it.  Susie’s ascension pre-dated these efforts.  I can tell you that it is weird walking up a leaning building – disorienting and mildly unnerving.  If the lean were more and I was a concerned 19 year-old, I think the experience might have been downright unpleasant.

To her credit, she insisted that we go despite her negative memories.  I admire her for that.  I, however, question the wisdom of sharing her discomfort with the kids.  They had a blast with it.  They asked her which side was the safest to be on when (not if) it falls.   They acted like they were losing their balance. They were mean.

I, however, was more compassionate.  I assured her that the repairs guaranteed that the tower was safe for a full decade.  Of course, I also shared that the decade ended one year ago . . .

Here is a picture of Susie after her climb with the mean ones. 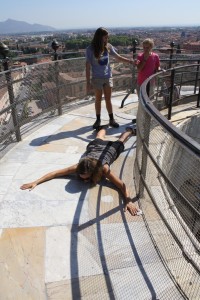 Here is an obligatory photo with forced perspective of Virginia holding up the tower.  Can you believe that we were the only people doing this joke?  Me neither. 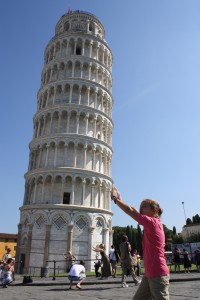 In addition to the tower, Pisa also has a beautiful church with the most impressive pulpit carving I have ever seen.  The craftsmanship was stunning in it power and detail – showing scenes of the creation, Herod’s slaughter of the innocents, stations of the Cross and the Last Judgment.

It is worth noting that the great Italian church builders loved their suffering.  I have seen souls tortured in Hell, San Sebastian punctured with arrows and a lot of slain babies.  A trip to a large cathedral can provide enough violence to qualify for a Quentin Tarantino movie.  And that is before you even get the apse.

After our visit, we drove (SLOWLY) to Siena, avoiding the Vespas and loving the views.

A drive through Tuscany reveals a series of old towns built on hillsides.  These olds towns are one part fort and one part church.  They kinda beckon to you as you drive.  I wonder who still lives there.  I envy their view.

When we got to Siena, we parked and walked to the old city.  Within the ancient gates, we strolled in streets that have changed little in the past 400-500 years.  What I liked about it most is the fact that it felt less touristy than authentically lived in.  As we walked along, we saw haircuts, shoe repair and picture framing.  Sure there were souvenir stores, but they were outnumbered by stores serving the locals.

Siena has two sites worth sharing.  First, it has a massive central square, the Piazza del Campo.  I say it is massive.  I am guessing it is a bit more than an acre.  That make it big for a hilltop city.  It, however, is NOT big if you want to have a horserace within it. 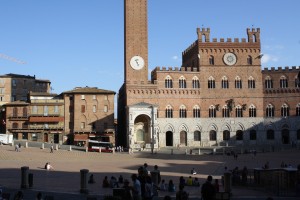 That is right.  They ride horses within this tilted and oddly shaped Piazza.  It is part of the celebration of the Assumption of Mary.  You might ask what does crazed Italian equestrians riding without saddle in a health-threatening manner has to do with the Virgin Mary.  What?  It is not obvious?  Clearly it is – um – well – celebration of purity – er.  OK, I have no idea.  But it seems like good fun, in the most-injuries-are-not-too-life-threatening way.

The second site is the Duomo/Church of Sienna.  It is striking with alternating white and black marble that creates a deeply memorable impression. 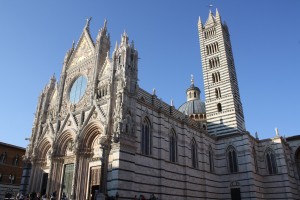 It is not as big as St Peters in the Vatican or as old as the Prague Cathedral.  Yet it might be my favorite.  We visited as the day was coming to an end, so the white and black and pink marble was ignited with the magic light that precedes sunset. 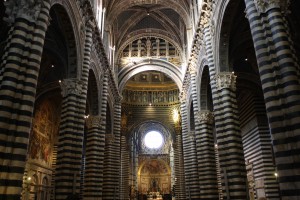 One final image of Siena was the competing flag twirlers.  As part of the horse races, precision flag teams would perform competing shows to drum rhythm.  We saw two different groups.  I love the fact that they are not slated to compete again until next July.  That is some commitment. 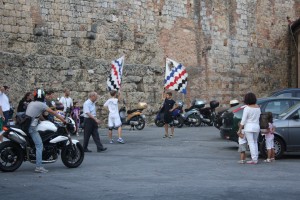 We have a crazy driving day tomorrow, so I am not sure whether I will have a new update tomorrow.  If not, know more is coming as we approach Espana!